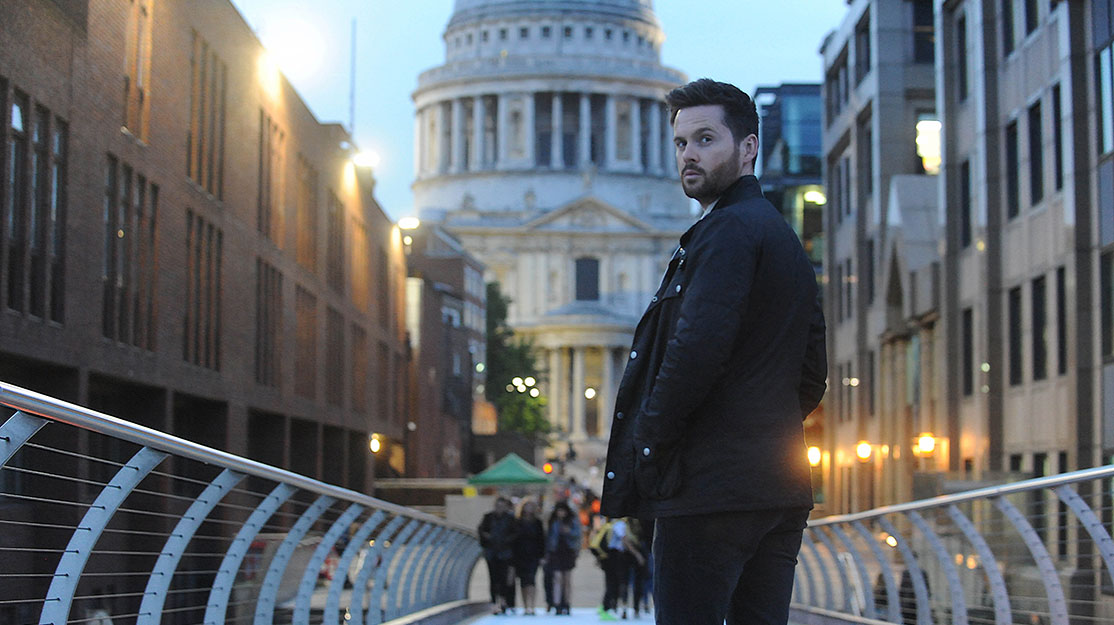 Following a feature-length pilot in 2016, Tom Riley returns as a tortured detective in a full season of ITV drama Dark Heart. The actor tells DQ about reprising the role of DI Will Wagstaffe, playing a cop and filming in London’s Soho.

When DQ picked up the phone to Tom Riley, the British actor is holed up in LA where he is deep in post-production on The Toll Road, a short film he has directed and produced featuring a cast led by Masters of Sex star – and his wife – Lizzy Caplan.

“It’s more work than I’ve ever done in my life for something so small,” he jokes about the project, in which an eccentric couple face adversity on the eve of their ninth wedding anniversary.

But the Californian sunshine is a world away from where Riley spent several months earlier this year, on the mean streets of a gritty and roughed-up London where he reprised his role as DI Will Wagstaffe in ITV’s moody crime drama Dark Heart.

Wagstaffe – Staffe to his friends – is a man devoted to his work while battling personal demons as he is haunted by the unresolved murder of his parents when he was 16 years old. It’s a weight on his shoulders that affects his on-off romance with Sylvie (Miranda Raison) and his relationship with his sister Juliette (Charlotte Riley) and her son Harry. But although he is an exceptionally good police officer, leading a team including DC Josie Chancellor (Anjli Mohindra), he continues to push the boundaries of what is acceptable.

The six-part series, which debuts on Wednesday, tells three stories across two episodes each. The first sees Staffe investigate the murder of a man found tied to his bed, choked and severely mutilated, the victim of a possible revenge attack after previously being arrested on suspicion of sexually assaulting two young girls.

The return of Dark Heart comes two years after a feature-length pilot, which makes up the first two episodes of this full season, first aired on ITV’s now defunct pay TV channel ITV Encore. But it was successful enough for the broadcaster to commission two new stories that will continue to see Staffe struggle to balance his personal and professional lives.

When viewers first meet Staffe, “he’s tortured, he’s not in the best state. He doesn’t behave in the best way to the people around him.” explains Riley, whose previous credits include Da Vinci’s Demons and The Collection. But while police procedurals can be difficult to reinvent, with cops always able to get the job done despite their personal flaws, the actor says Staffe stands out because his personal demons don’t help him do his job but rather stop him doing it better.

“With this character, what was interesting was this stuff is kind of an obstacle to him,” he says. “It isn’t necessarily the stuff that makes him a good cop. It’s the stuff that stops him being the best cop and stops him being the best family member. So rather than a guy who’s like, ‘Well he’s got a temper but my God when he gets mad at the villains they’re going to give it all up,’ it’s like, no, he needs to mature slightly. I think he’s in a state of arrested development from this tragedy in his past and he can’t quite get past it.”

It’s also one of those examples where actors have to stop trying to find any similarities to the character they’re playing and just play them as they are on the page. “It’s funny really because you want to find the place where you meet the character. You don’t want to be putting it on too much and find bits that are like you,” Riley says. “I guess elements of perfectionism and wanting to get everything right are the stuff I connected with. Everything else was just, ‘Oh ok, I get to act out, that’s fun.’”

The 11-week shoot played out across London, with many long days to incorporate the high number of night sequences required by the script. The English capital’s lack of space meant finding a unit base close to locations also proved tricky, with Riley recalling having to change costumes in pub toilets and in a strip club basement. But, he says, “the most challenging thing is shooting in Soho on a Friday night, with a bunch of people who have had their full working week and you’re in the middle of your working day and they’re out and wasted and want to look into camera and tell you you’re not famous and who are you and why are you here? That stuff was really encouraging!”

Inspired by the characters created by novelist Adam Creed, the series comes from writer Chris Lang and Silverprint Pictures, in association with US SVOD platform Britbox. Lang wrote the first and third stories, with Ben Harris (Marcella) penning the second story.

Lang is also responsible for historic crime drama Unforgotten, which recently aired its third season, and miniseries Innocent. Riley says it’s his deep understanding of criminal cases and his methodical research process that make his scripts stand out — but also his keenness to listen to ideas from the rest of the production team, Riley included.

“Whilst obviously being a Bafta-winning brilliant writer, he’s also very open to collaborative ideas. In the early script stages when we were coming back in, he was very open to hearing, ‘What do you think this needs, why does this work, why doesn’t this work?’ I think it’s rare for someone who has his level of success to still be able to say, ‘Yes, but what else can the people I’m around bring to this and how can they potentially sculpt and shape the story?’”

In particular, it’s the fine line between Staffe’s personal and professional life that Riley thinks Lang walks so well. “The heavy plotting is what drives it and the plotting of the crimes in each episode but that’s nothing without understanding who these people are and why they act in the way they do,” the actor continues. “Seeing where he comes from and what drives him is just as important and makes it more relatable. Not everyone can relate to a paedophile revenge case as much as they can dealing with normal human family drama.”

But unable to resolve the mystery behind his parents’ murder, Staffe is pushed to solve other crimes. “He can have as much control over his department in the police headquarters and he can have as much control over each case and the people that are in the interrogation rooms with him but that doesn’t mean he necessarily has control over the overarching arc of his life and that’s what drives him, I think — that desire to find out what happened, who did it and in the absence of being able to work that out, he’s funnelling that energy into solving other crimes,” Riley says.

The actor notes that these six episodes end in a way “that will intrigue people to know more,” but hints that Staffe is likely to be the only police officer he will play for a while, with or without a second season.

“I’ve been very lucky in that I’ve been able to play a really wide variety of different characters, different status characters and different intelligence characters,” he adds. “But because of that, the only thing that really keeps it interesting for me is being able to say, ‘Oh I haven’t done this before’ or ‘Today was really challenging’ or ‘I don’t know if I can do tomorrow.’ That’s the kind of stuff that really keeps it interesting. Otherwise I do have a terrible tendency to get bored.”