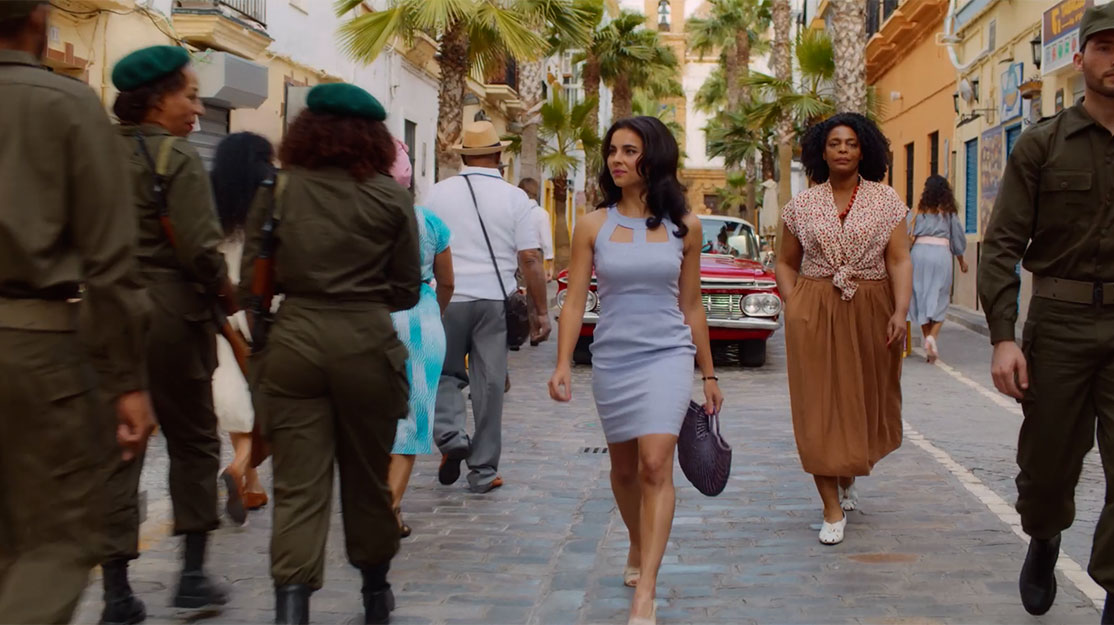 Cuba Libre star Beatriz Godinho and writer-director Henrique Oliveira introduce DQ to the larger-than-life true story at the centre of this Portuguese drama about one woman’s infatuation with Cuban revolutionary Che Guevara.

For more than 20 years, Portuguese writer and director Henrique Oliveira held an ambition to bring the story of Ana Maria Silva Pais to the screen. He first read about her extraordinary life in a newspaper article, but early attempts to dramatise her story failed to materialise, either because of the transatlantic scope of the period story or the infancy of the Portuguese television industry.

Oliveira (1986, Vidago Palace) also felt his own attempts weren’t good enough. “We wrote for three years and everything was garbage,” he says. But now, on the back of global demand for compelling stories, whatever their language, increased budgets and a more mature Portuguese industry, he has finally achieved his goal in the shape of Cuba Libre.

The six-part drama stars Beatriz Godinho (O Sítio da Mulher Morta) as Annie, the only daughter of the director general of the PIDE, Portugal’s secret service. While her looks brought her beauty-contest success, it was her political ideals that shaped her life. The show follows Annie after she escapes the Portuguese dictatorship with her Swiss diplomat husband when he is posted to Havana. There, she falls for more than just the city’s vibrant culture, dedicating herself to the Cuban revolution, all the while being secretly in love with Che Guevara.

The cast of the show, which is described as the most ambitious period drama ever produced in Portugal, also includes Adriano Luz (Mysteries of Lisbon) and Margarida Marinho (Meu Amor), who play Annie’s parents Fernando and Nita, while Pierre Kiwitt (Das Boot) portray’s her husband Raymond. Based on José Pedro Castanheira and Valdemar Cruz’s book A Filha Rebelde, Cuba Libre is produced by Hop Films and distributed by Keshet International.

“When I first read the story, I fell in love with it,” Oliveira tells DQ. “I had some attempts to make the series in the past, but now is the right time. The stars aligned to make this, and one of my biggest joys is to have Beatriz. What she brought to the character is completely amazing and I’m very grateful that Beatriz is such a talented actress.”

The chance to play Annie came at a time when Godinho was worrying about her next job following the onset of the pandemic, which brought a sudden halt to the theatre production in which she was starring.

“When this job came along, not only was it the opportunity to work again but also it’s an amazing story,” she says. “It’s almost difficult to believe it was the life of somebody, because it’s so complex and full of different things – action, romance, periods of extreme happiness, grief and solitude, but then communion with a lot of people from all over the world,” the actor says. “All of those things really interested me and I wanted to live, breathe and talk about it for three or four months. It was amazing.”

Her meeting with Oliveira marked the first time Godinho had heard the true story behind the series, while reading A Filha Rebelde was like “Christmas for an actress. I had all this information but, at the same time, there were lots of gaps to fill,” she says. “I couldn’t wish for a better starting point to this story. It’s very complex and intense. Once I got to know the story, I was sold.”

The opening episode of Cuba Libre lays the groundwork for what is to come for Annie, from winning beauty contests and having ideological discussions about communism to living at home with her politically minded father and meeting her soon-to-be diplomat husband, before her story moves to Cuba.

From the outset, it was clear to Godinho that Annie is a character full of contradictions: a legendary beauty who loved music, dancing and French culture, she was also a rebellious spirit with strong-held political opinions that often clashed with those of her family.

“But then I started to understand she lives in the moment a lot,” the actor explains. “She’s influenced a lot by where she goes next and what she believes next. She’s filled with passion, which brings a lot of intensity to everything she does. The other interesting thing is she seems contradictory because she’s always refreshing herself. She doesn’t change that drastically, but she’s always refining and adapting to the people she knows and falls in love with and the places she inhabits, and rediscovering old ideas with more maturity and experience. It’s pretty similar to an actor’s job, trying to stay in the moment all the time. It was a challenge [to play her] but a very pleasant one.”

Godinho only had a few photographs of the real Annie to use as reference points, but she was able to study her posture and physical stature to better become her on screen. “Then I go a lot with my intuition as well,” she says about building her character. “The music I hear, the books I read, I’m always trying to take things on, even what I eat, what time I wake up and how I dress. Then I start cleaning up and refining the character in communication with the crew and cast.”

The actor worked closely with Oliveira every day on set, offering suggestions and ideas about Annie and her story, which is told through time-jumps, flashbacks, flash-forwards, narration from Raymond and the use of archive footage to set the scene in Havana. Oliviera jokes that there might have been 500 versions of the script, but he says he was always respectful to the fact Cuba Libre is based on an “overwhelming” true story.

“It was a very complicated situation, with so many things to tell,” he says. “The big thing was how to divide this story into six episodes. The pace is not always the same – episode six is a lot faster, with a bigger period concentrated in one episode. There are some episodes where it’s just one month and others where it’s 15 years.”

Behind the camera, Oliveira worked closely with his DOP, Manuel Pinto Barros, to create the look and style of 1960s Havana, featuring brighter, sun-bleached pastel colours compared with scenes set in more classical and conservatively shot Portugal. In the beginning, he also hoped to film on location in the Cuban capital – a plan halted by the pandemic.

It was then that a Spanish screenwriter friend suggested he look a little closer to home, across the Portugal-Spain border to the city of Cadiz – a city dubbed the twin of Havana.

“I didn’t know this but, in fact, Havana was built like Cadiz, so we went there and it was amazing,” he says. “It was an easy decision to make. It was a lot more practical, and the green and the blue of the sea was just like Havana. We had a lot of discussions in terms of the design of the project, but I’m very happy with the look of the series.”

The filmmaker previously created another period drama, Vidago Palace, which was a coproduction with Spain, while Cuba Libre is launching on the heels of Netflix’s first Portuguese drama, Glória – something Oliviera describes as a new step for Portuguese production.

“The industry is changing very quickly and doors are opening now,” he says. “Even producers in Portugal are competing to push the limits of what we are doing now. Of course, Cuba Libre is one of the productions I think will push those limits.

“In terms of Portuguese series, this is the biggest cast ever for a Portuguese production. We had so many Cuban and Spanish-speaking characters. We also have a lot of French-speaking characters. It was incredible because it was amazing and completely crazy to have so many different actors coming in. It’s a new thing to make such an international series.”

Similarly, Godinho is starting to feel the impact of the streamer-fuelled drama boom in Portugal. “We are producing more and more refined series and I feel that, especially with Spain and other countries within Europe, new collaborations are starting to appear more often. As an actress, it’s very exciting to get to know other cultures, other ways of working and international casting teams and crews,” she says. “We all have something different to add and we find a common ground to work with. It’s a very exciting time to be an actress.”

Playing Annie is an example of that, giving Godinho the chance to portray a character who is “many things at the same time,” she says. “For me, it’s very inspiring to see someone having such a complete life. I hope people who watch the series can relate at some level to her and be inspired by having a complete and complex life. At least, that’s what touched me the most.”

Oliveira describes Cuba Libre – which launches tonight on Portugal’s RTP – as a “compelling story” and one that he hopes connects viewers with the emotions of the characters. “That’s what I tried most to describe and translate in the visuals,” he says. “This series is a true story but it’s also a unique story. It’s not a regular TV series. It deals with things that are profound inside us and, in the end, I think people will be glued to this powerful story.”