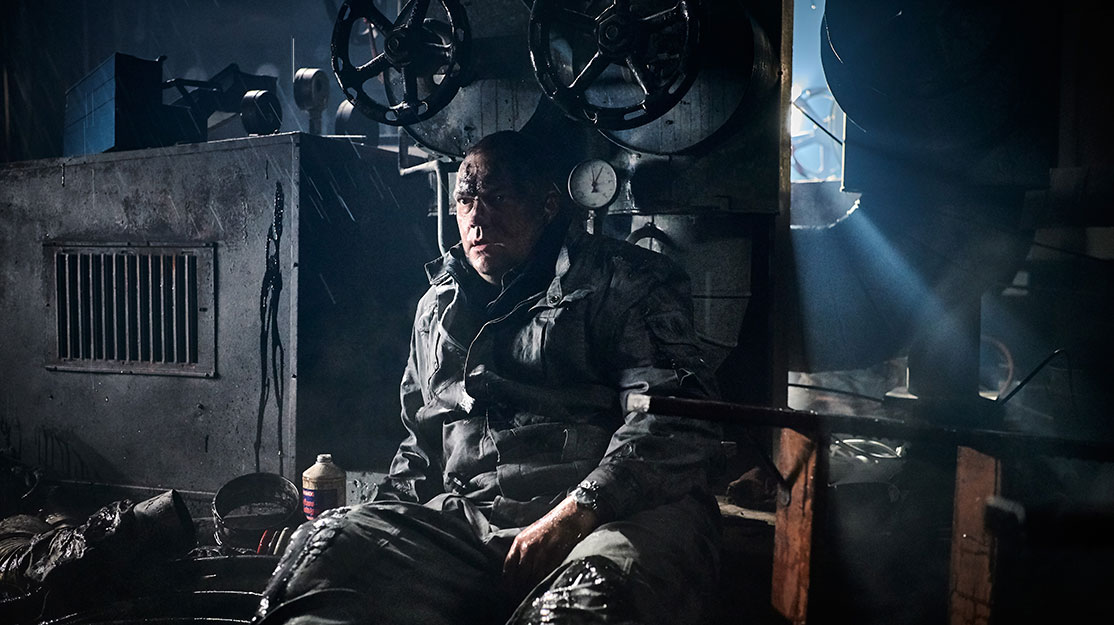 Sky Deutschland embraces Germany’s roots in cinematic horror with Hausen, a haunted house story in which the inhabitants of a dilapidated tower block face their own fears – and something even more sinister lurking behind the walls.

While Germany has a rich heritage in horror films – thanks in no small part to the 1920s Expressionist period that saw the release of movies including The Cabinet of Dr Cagliari, The Golem and Nosferatu and established directors such as Fritz Lang – the genre has largely been absent from television.

Now, Hausen, an eight-part series from Sky Deutschland, aims to change that with a chilling and sinister story of a seemingly haunted apartment complex and the numerous inhabitants who live there.

“The writer, Till Kleinert, approached us in 2017 and told us about the project. There was already a pilot script and that was very intriguing,” says Frank Jastfelder, the broadcaster’s director of scripted production.

“We thought, ‘Why not go into genre and why not dare to do something that is not very common in Germany?’ We have a certain horror tradition, but that is nearly 100 years old. The genre has been a bit neglected over the last decade, so we read the script and thought it was really worth developing. Later on, together with the writer, we approached Marco Mehlitz at Lago Film to join forces with us and my colleague Quirin Schmidt, who is the commissioning editor. We greenlit the project in the late 2018.”

Mixing horror, mystery and thrills, Hausen sees 16-year-old Juri (Tristan Göbel) and his father Jaschek (Charly Hübner) move into a run-down housing complex on the outskirts of an anonymous city. As the caretaker of the building, Jaschek tries to build a new life for himself and his son, but Juri slowly discovers the house has a life of its own and is feeding on the suffering of those who live there. To fight this relentless force, he has to win over his neighbours and rebel against his father, who quickly falls under the building’s destructive spell.

“It’s a rather universal story,” says Mehlitz, whose Lago Film produces with Sky Studios. “It is about people living together, but somehow they have their lost identity. They are caught in their little worlds. And at the same time, they don’t realise they are actually locked into something bigger. There is a way out through our lead character, Juri, who discovers the only way you can survive is with empathy, by looking at what is behind the walls and what is driving our misery. That’s a rather human and beautiful way to deal with it.”

With Hausen covering multiple themes and genres, director Thomas Stuber (In The Aisles) says helming the series was an enticing proposition. “At first I thought, ‘Did you call the right Thomas Stuber?’ I haven’t done any mystery or horror before. But when I dug deeper into the scripts, I saw all these protagonists and all these stories combining,” he says. “It’s told in a way that you not only don’t often get on your desk, but you do not get it on your desk in Germany. This is totally new and I wanted to be a part of that”

At the time the show was commissioned, a certain Netflix series called Stranger Things was winning acclaim around the world. But the creative team were keen to ensure Hausen didn’t imitate any other type of horror, in film or television, to create a uniquely German series.

What followed was a collaboration that brought together production design, cinematography and lighting, among other factors, to help form a very particular and unsettling atmosphere in and around the show’s central location.

“When we were starting out, we knew everybody living there would have a little cell [of their own] but they are all living together in the same building,” says Mehlitz. “Our team created a world where we decided everybody would be almost caught in time and unable to get out. There is very little of the outside world. We have the house, but [the people living there] don’t even go out shopping because there’s a little store downstairs. Everybody is in the house. It is like a world of its own.”

For the central location, the producers sought a building with a particularly confusing layout and interconnected walkways that would set the characters in a labyrinthine maze. But with modern tower blocks all adopting simpler layouts, they eventually uncovered a former East German hospital that had been abandoned for more than two decades.

“Shooting on location or in the real abandoned hospital was very different from how it would have been if we’d built everything inside a studio,” says Jastfelder. “I was only on set a couple of times, but it was spooky to be there because everything is ripped apart; every cable is ripped out and it was completely destroyed.

“At the start, you expect all kinds of hardships. I thought it would be easy to find an abandoned house in East German, but that was one of the biggest challenges,” continues Stuber. “We needed labyrinthine, mysterious hallways but most of these high-rises have straightforward floors, with five tenants to the left and five to the right. When we ended up finding this old hospital, we were very happy, but that was hard. And the shoot was hard – it was almost 90 days going into winter.”

The cast also includes Alexander Scheer, Lilith Stangenberg and Daniel Sträßer, who along with Hübner and Göbel were put through their paces on an “exhausting” shoot. But they were helped by an early visit to the set to get a sense of where they would be filming.

“I remember bringing Charly in for the first time and he got lost,” recalls Stuber. “He literally got lost because I left him alone. That was a very good start for him because he never lost that feeling.”

Conversely, the director also recalls a lot of laughter during filming: “The funny thing is you get to see all the effects so it’s not that horrifying. But then when the camera starts rolling, we create an atmosphere. Everything is quiet, the lights are flickering. I make the noises at the monitor. I really try to create anxiety. I try to push them to get the right performance.”

Filming wrapped before the Covid-19 pandemic took hold earlier this year, though the crisis did mean on-set special effects had to be brought together with computer-generated visual effects in post-production.

“We had a mixture of effects throughout the show because the big antagonist is the building itself, which doesn’t move,” says Mehlitz. “We had a fantastic special effects team on set and then an enormous amount of visual effects in post. It was rather difficult because all the visual artists were working from home. But in the end, it turned out to be a fantastic process. It all came together on time and on schedule.”

With the story concluding at the end of the eight episodes, Stuber teases the emergence of ghosts and monsters as Juri steps up to confront the sinister machinations behind the haunted housing complex. He also falls in love, adding romance into the mix for good measure. “There are several attempts on his life and, in the end, it’s up to him to save his father,” the director adds.

Distributed by NBCUniversal Global Distribution, Hausen debuted on Sky Deutschland on Halloween and has its international premiere today as part of Content London On Demand. It will then roll out on Sky in the UK and other international broadcasters in 2021. But no matter where the show is watched, audiences will be able to relate to the series through one common denominator – fear.

“Genre actually tends to work on an international level because everybody can identify with that, as opposed to comedy, which has a lot of cultural identity and doesn’t tend to travel,” Mehlitz notes.

“The feeling itself translates [between audiences], while the setting is unique. You get a glimpse into a [different] society, but you’re confronted with feelings and emotions that should be familiar to everybody.”