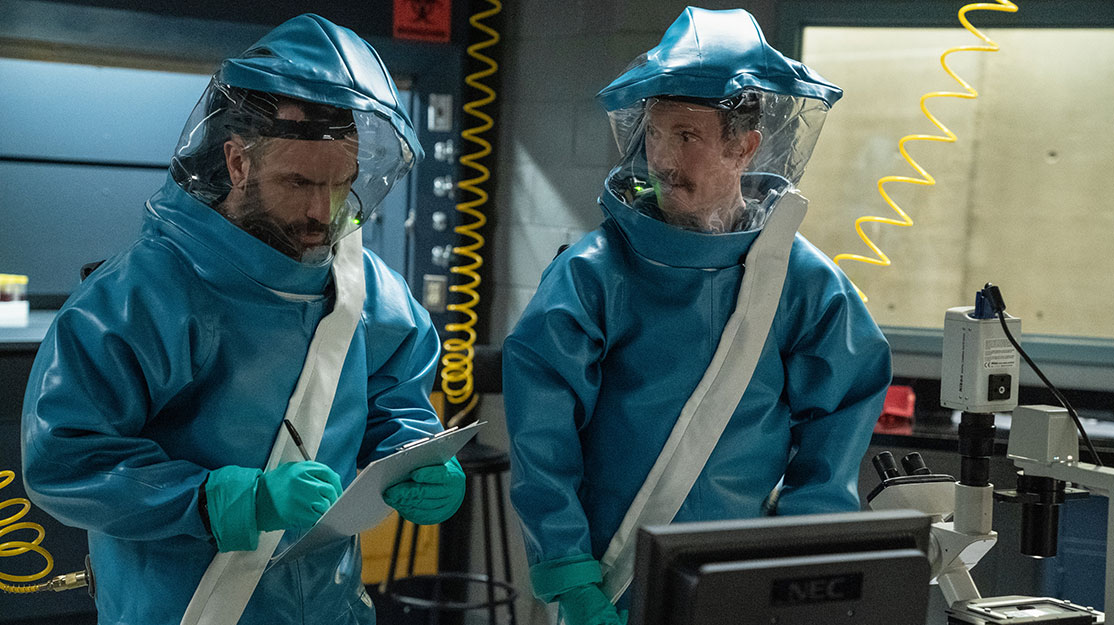 Showrunners Kelly Souders and Brian Peterson tell DQ about making The Hot Zone: Anthrax, National Geographic’s scientific thriller that dramatises how the US was rocked by an anthrax attack just weeks after 9/11.

In September, the US marked the 20th anniversary of the devastating terrorist attacks of September 11, 2001, when passenger planes were used to attack New York City and the Pentagon, near Washington DC.

Weeks later, US authorities were tasked with tackling a second attack to hit the country when letters containing anthrax – a deadly disease spread by bacteria spores – were sent to unsuspecting victims in Florida, DC and New York. The anonymous assault claimed the lives of five people and caused panic across the country before a team of FBI agents and scientists slowly closed in on the person responsible.

The story of the anthrax attacks and the ensuing investigation, set against the backdrop of a still shocked and grieving nation after 9/11, has now been dramatised in The Hot Zone: Anthrax. It’s the second instalment of the National Geographic anthology series, after season one, which starred Julianna Margulies (The Good Wife), focused on an Ebola outbreak.

This time, the series follows the parallel stories of Matthew Ryker (Daniel Dae Kim, Hawaii Five-0) and Dr Bruce Ivins (Tony Goldwyn, Scandal). Ryker, an FBI agent with a specialty in microbiology, risks his career to convince his superiors the US is under attack again. Meanwhile, Ivins, a brilliant microbiologist, works closely with the FBI to uncover who is behind the deadly anthrax letters, while his growing instability and paranoia give way to deeper unnerving discoveries.

Produced by Ridley Scott’s Scott Free Productions and 20th Television, The Hot Zone comes from showrunners Kelly Souders and Brian Peterson, who have previously partnered on Smallville, Under the Dome and the Einstein and Picasso seasons of fellow Nat Geo anthology series Genius.

After the first season of The Hot Zoe, which debuted in 2019 and became Nat Geo’s most watched scripted series ever, “we had so many ideas [for season two] that were really all over the map, especially some of my ideas I brought to the table,” Peterson tells DQ. “But this just seemed to have such a clear link both because it was in somewhat of the same timeframe [as season one] and it also just had a very specific individual story. It wasn’t just a story about ebola or anthrax, it was about some very interesting and unique personal journeys.”

“As we started to read about it, at first it was like, ‘I kind of remember that,’ but every book and article we read, we just got deeper and deeper into a story that was unbelievable for us,” Souders says. “When you can’t get enough of the research and you keep craving more, you know it’s probably going to make for a great show.”

Central to that story are Ryker and Ivins, but while the latter is based on a real person, Ryker was drawn together from a variety of sources.

“There were so many FBI agents who came and went on the real case that, obviously because it’s TV, we need one lead to take us through the series,” Souders says of Kim’s character. “We also wanted to fictionalise the character because we wanted to get a little bit into the personal PTSD of 9/11.

“That was one of the ways we wanted to put a timestamp on it, to really get into what it would have been like to be an FBI agent right after 9/11, right when you feel like everything you’re doing to protect the country went horribly wrong and you’re terrified of what happens next. That made it a lot easier for us as writers to get to work from scratch.

“Ivins was a central figure in the case and we did as much reading as we could about him. We tried to step the audience through all the material we had gathered about his person and create a character that Tony really stepped into and made come alive on the screen.”

Throughout the show, 9/11 looms large, whether it is in the emotional frailties of characters still coming to terms with what happened, or shown through flashbacks or daydreams. All the time, however, the producers were keen to ensure it didn’t overshadow the central story.

“It definitely is part of the story but we were trying to be very conscious about not making it overwhelm the story, because the story is very different,” Peterson says. “But there’s no way to ignore the spectre of 9/11 that was hanging over all of us at the time. We tried to use Ryker’s PTSD and his flashbacks to represent what we were all going through and put us back in that moment of what was in the zeitgeist of the whole country. For anybody who lived through it, it was like nothing we had really lived through before.”

Unlike season one of The Hot Zone, S2 isn’t based on a single book. Instead, research took the form of multiple books, newspaper reports and other accounts that helped to shaped this “chilling, unbelievable” story that many people may remember but few will know every detail of what happened.

“In every single episode, things shift a lot and they keep shifting in different ways,” Souders says. “The way the FBI was investigating it was fascinating. The roadblocks they ran into were things you could never see coming. The psychological elements across the board were intriguing and kind of mysterious. No one was sleeping. And the science was changing. There was nothing in the real story of what happened that turned out the way I expected. However you assume it’s going to end, that’s not how it’s going to end on any level with any of the characters or storylines. All of it is a ride that has a lot of twists and turns. That makes for great storytelling. so part of our job was done for us.”

Peterson continues: “Especially the science. Having a case where nobody could predict the science that would be developed over the course of the investigation was fascinating because every character shifts once new science comes into play. It’s not just a piece of the investigation, it shifts the whole story. It’s rare for storytellers to get that.”

Another thing that helps the two seasons of The Hot Zone stand apart from each other is the way the disease at the heart of each story can be transmitted and spread. “The first season was about a virus you can catch from another person within your proximity, whereas this season it’s about a bacteria that’s lurking in the mail system,” Peterson notes. “It’s something that comes into your house, your business. The ‘enemy’ takes a very different appearance. It’s a very different vibe from the first season.”

The long-time writing partners ran a writers room to develop the story and the first scripts, until the Covid-19 pandemic hit around episode five and the room was taken online. That’s when it became “really challenging,” Souders admits, as Zoom meetings lacked the energy of in-person get-togethers in a room filled with large whiteboards. “It doesn’t quite have the same feeling over a screen, but we did our best and we had a great team of writers and staff that helped,” she says.

One lesson they did pick up from season one was the importance of casting, with Margulies heading an S1 cast that also included Noah Emmerich, Topher Grace, Liam Cunningham, Paul James, Lenny Platt and Grace Gummer.

“The first season had such a strong ensemble cast that elevated the entire show,” Peterson says. “Julianna was a fantastic lead but everyone rallied around her, and both the studio and network really helped us create the same level of acting this year, bringing in a full cast of people who you feel like you’ve met before. It was fantastic.”

“I really can’t imagine anyone else playing either of these roles,” Souders says of Kim and Goldwyn. “They so lived in these characters and what was great was, because Ryker is fictional, we were able to work with Daniel and talk ahead of time – and during filming, even – and work on the character and his backstory. It allowed all of us to really feel like Ryker is walking around, breathing and living his life.

“Tony threw himself into having a very sympathetic and real approach to embodying another human being. It’s not an easy thing for an actor to do. He really immersed himself in that world. He tried to understand the job and, as actors, they have to have a motivation for every word that comes out of their mouth, every little movement in their face, every time their body moves in a scene and in an environment. It all has to feel very real to them, and both of them are such dedicated actors and so professional, let alone extremely talented. I feel like we’re extremely lucky showrunners.”

Once filming in Toronto began, the crew were able to shoot continuously without further stoppages, even though the Canadian city was under lockdown.

“You didn’t get Toronto because it was completely shut down. You were lucky to be able to get a coffee, but it provided some great crew,” Peterson says. “There’s a lake location in one of the later episodes that is really perfect for the show.”

Souders adds: “It was freezing, with four feet of snow. But it looks beautiful. We were able to shoot all the way through. One of the things about the screen industry is that, all day, you have a huge team of people, amazing crews, cast, directors, producers, executives… a huge group of people who are used to trying to problem solve like that on the fly with massive issues, like snowstorms. It’s not like somebody ordered the wrong sandwich.

“It is an industry built on problem solving so, as hard as it was, we were probably in one of the greatest industries to actually figure out how to move forward. When you’re making television and movies, every day feels like a miracle. It’s one of the joys of the entertainment business.”

With The Hot Zone: Anthrax debuting in the US on November 28, the showrunners are already looking ahead to a potential third season. “We would love it,” Souders says. “There are lots of great ideas out there. We’re just trying to get through the premiere. With Covid, it was a massive mountain to climb.”