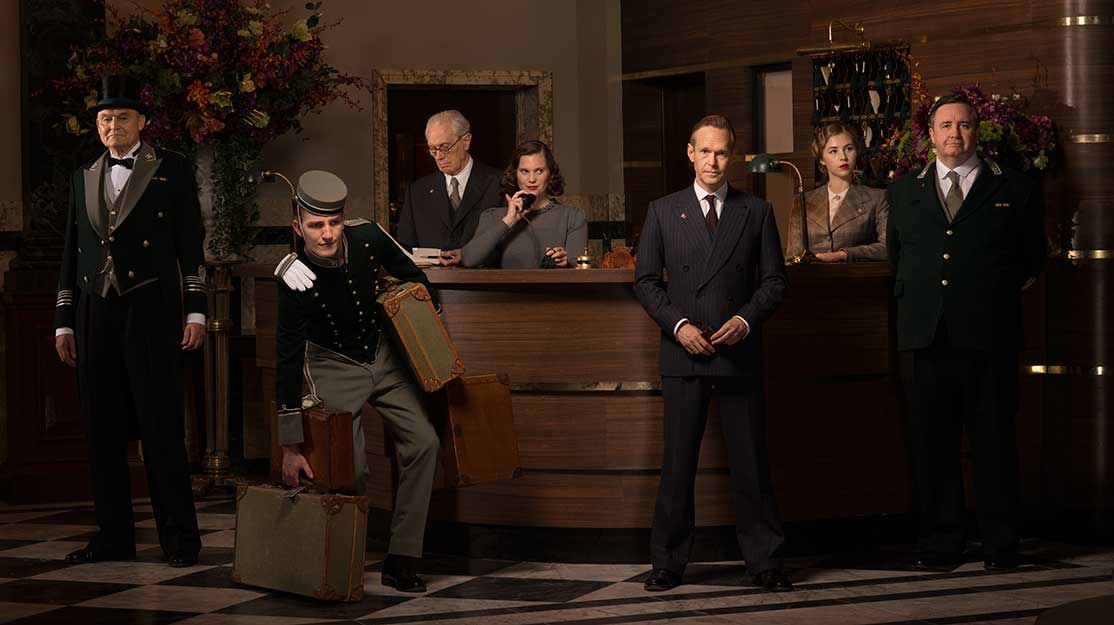 The party’s just getting started inside London’s most glamorous bomb shelter – but, as DQ discovers, all might not be as it seems behind the doors of The Halcyon.

It’s somewhat jarring to see groups of people checking their smartphones while standing around in 1940s period costume. But that’s the scene between takes when DQ spends a day at the West London Film Studios.

It’s here that two stages have been transformed into The Halcyon, a glamorous five-star hotel at the centre of London society and a world at war that forms the setting of an ITV drama of the same name.

Early in the show’s four-year development process, its creators were clear they didn’t want to create an ‘upstairs-downstairs’ drama akin to Downton Abbey. Instead, they wanted to tell a story about the hotel’s owners and its employees, with the central focus naturally falling on Lady Hamilton, who gives up her country estate to move to London and run the hotel, creating a “total nightmare” for Garland.

“It took a good seven or eight months to find that point of conflict and really get it working,” explains Hughff. “We thought the show was about so many other things and, with so many characters, it takes a long time to develop because you have so many relationships, but that central relationship was the crux of the drama.”

Another key storyline involves a Romeo and Juliet-inspired romance between Lady Hamilton’s son and Garland’s daughter, whose budding romance causes more trouble for their warring parents. “Around them, there are layers and layers of other characters who all have their own intrigue and interest, and you get drawn into those aspects of the story,” Hughff continues.

“We always wanted there to be a mystery running through the middle of the series, so Richard Garland has a great big secret, which we learn halfway through the season. And by the end of the season, he gels with Lady Hamilton because she does something bad and he covers it up for her.”

The production crew constructed the hotel’s grand foyer with a sweeping staircase, a bar area and dance floor, a backstage space, a kitchen and several bedrooms. The front, rear and restaurant exteriors, meanwhile, were all filmed on location. Eagle-eyed viewers might recognise the front of the hotel as The Land Registry Offices in Lincoln’s Inn Fields, central London, while the same city’s Liberal Club serves as the restaurant.

Construction of the set took 12 weeks, with around 100 people working on the build at one point. Add in those buying props, dressing the sets and working in the art department and Croucher estimates upwards of 150 people were working on the production at its peak.

“The Second World War is such a rich tapestry of story,” he says. “From our costume team [led by Downton Abbey’s Anna Mary Scott Robbins] to our make-up and design teams, everyone was just so enthused when we started it, because it’s such an amazing period.

“We talked a lot about The West Wing when we were designing the set and, because everything’s connected, you can do these great walk-and-talks where you go from the foyer to the bar to backstage.”

Croucher describes the latter area as The Halcyon’s “crowning glory,” where the tiles, corridors and staircases all match Blythe House, an archive building for the Victoria & Albert, Science and British Museums that doubles as the exterior of the rear of the hotel.

“There are these amazing corridors and staircases so we can constantly make the world feel bigger,” he says. “We designed it so you can have characters in the bar and then they move backstage and then come into the front of house, so there’s constant movement.

“We’re lucky because the studio is quite long. You know when you’re in a hotel and the corridors just go on forever? That’s what we wanted to replicate. I also love that all the corridors are designed to enable us to show different floors.”

Meanwhile, a fully functional kitchen allows the camera to capture close-ups of the chefs at work, with real steam filling the air around them. And though it would have been laborious, not to mention expensive, to build 150 bedrooms akin to a real hotel, four bedrooms were constructed and regularly redressed to give the appearance of dozens of different rooms.

“Every room has several doors in and out and we can repaint them and put different furniture in,” Croucher reveals, adding that it took two days to repaint and redress each room. “All of the spaces are constantly changing. It’s a schedule nightmare because we have to be in and out of different rooms. But you really feel like you’ve got this grand hotel.

As expansive as the hotel set is, a quarter of shooting was done on location. One example is a visit to an RAF base where Lady Hamilton’s son Freddie is a pilot.

“As great as it is to all be in the hotel, ultimately you also need to see a bit of the war,” Croucher says, “which is why we show the East End Blitz and the RAF, because otherwise the world becomes too insular.”

Croucher and his production team met the challenge of recreating the Blitz by taking over some period streets in Greenwich to film the nighttime bombing campaign, which begins in episode five. “It was amazing to be able to shoot in those East End streets,” he enthuses. “Those are the challenges I love the most. Filming the blackout was particularly challenging because if you stand in central London now at night, there is a light as far as you can see. There’s always ambient light. We managed to control 50% of the lights in our area but cranes and the like have to be painted out in post-production.”

The West Wing wasn’t the only influence in play, with Hughff revealing that the look and feel of 2007 movie Atonement, plus music from HBO miniseries Band of Brothers and The Imitation Game (2014), also provided inspiration.

Indeed, music is a central element of the series, with original songs created for the show in the style of the 1940s. When DQ visits the set, the stage is ready for the Sonny Sullivan Band as the hotel prepares to celebrate its 50th anniversary. Actor Tointon sings in the series, while award-winning singer-songwriter Jamie Cullum has written two songs for its soundtrack and fellow musician Beverly Knight also performs in scenes set at the Café De Paris.

“Music is really the heartbeat of the show,” Croucher says. “What was great about that period was everyone genuinely thought each day could be their last so the parties were even bigger and wilder and more extravagant, and we tried to show that.”

Behind the camera, director Stephen Woolfenden (Harry Potter) took charge of the first filming block, establishing the show’s visual style and a sense of how the hotel works.

“We wanted it to look sumptuous, elegant and sexy,” notes Hughff. “We have a bar and music and we wanted to make sure the parties were ones we’d all want to go to. We also didn’t want it to look flat and set-like. It’s hard when you build a set; you’ve got to do a lot of work to make it look like it has many dimensions, and the crew has done such an incredible job.”

Despite the creators’ aforementioned reluctance to compare The Halcyon to fellow ITV period drama Downton Abbey, it is hoped the new series could have similar longevity to Downton, which finished last year after six seasons. Launching in the UK on January 2, there is scope for The Halycon to run for five seasons from 1940 until the end of the war in 1945.

But Left Bank Pictures MD Marigo Kehoe says the similarities end there: “A lot of people say this is the next Downton Abbey but we didn’t set out for it to be. Andy [Harries, Left Bank CEO] and I have never done things that are just in a box. We’ve done Strike Back, an action-adventure series, and Wallander. It’s a huge breadth of stuff.

“We’d had this in development for a long time, actually, and what was going on in the hotels during the build-up to the war and the war itself is a fascinating topic.”

Croucher concludes: “‘London’s most glamorous air-raid shelter’ is a line we use a lot. Everyone knows the Second World War but hopefully the hotel will allow us to put a great spin on that. It’s a side of the war you haven’t seen before – the side where the party still carries on.”