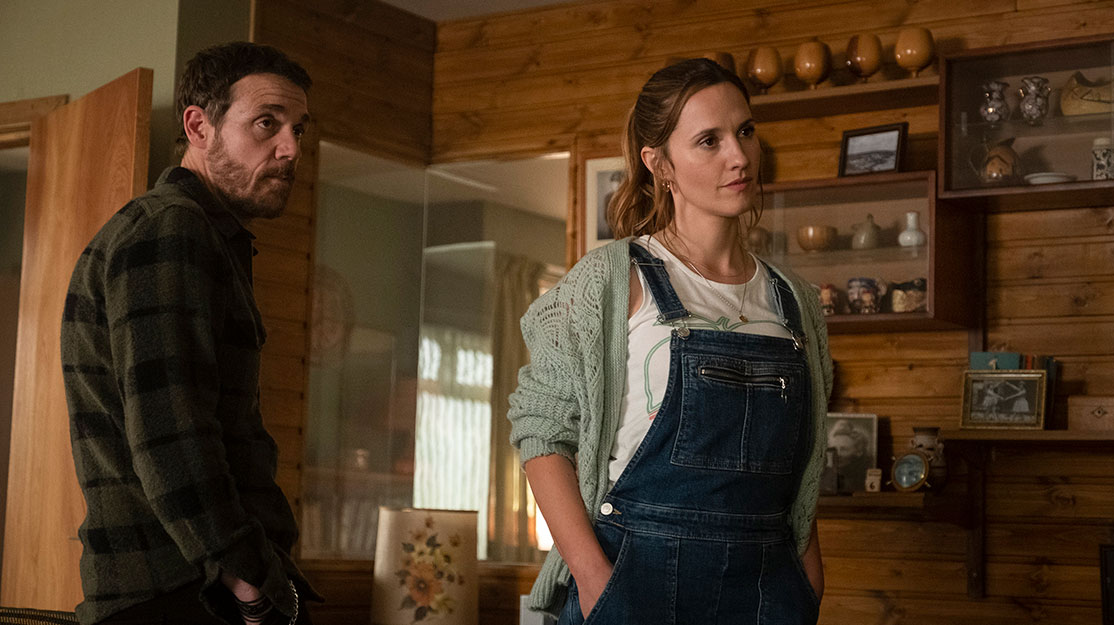 After three seasons playing an android in sci-fi drama Humans, actor Ruth Bradley reveals how she transformed herself again for Scottish drama Guilt as a woman investigating her uncle’s mysterious death.

By her own admission, Ruth Bradley “never fitted the mould of being the cute, non-threatening girlfriend.” So it should come as no surprise that the Irish actor once again finds herself in an unconventional role.

Having played a time traveller in Primeval, a serial killer’s lawyer in The Fall and an android pretending to be a human police officer in Humans, not to mention crime novelist Agatha Christie in TV movie Agatha & the Truth of Murder, she now stars in Scottish drama Guilt as an American woman who turns up in Edinburgh in search of answers after her uncle’s mysterious death.

The four-part series, written by Neil Forsyth, centres on brothers Max (Mark Bonnar) and Jake (Jamie Sives), who unwittingly run over and kill an old man, Walter, on their way home from a wedding. Uninsured and over the drink-drive limit, Jake is persuaded by Max to cover up the deed.

However, when neighbours and relatives, including Walter’s niece Angie (Bradley), begin to suspect the man’s death wasn’t as innocent as it seems, the brothers find their lives rapidly falling apart as their actions begin to catch up with them.

Laced with black humour and numerous plot twists, the show was intriguing to Bradley, and after reading the first three scripts – a luxury for an actor – she was hooked.

“Usually you get the first draft of something, but these scripts were so polished,” Bradley tells DQ, having just finished a run in This Beautiful Village at Dublin’s Abbey Theatre. “It’s so rare you get that level of perfection at such an early stage, and I just gobbled them up. That’s such a good sign, if you can’t stop reading something and you want the next one.

“I was so desperate for the fourth one. I just wanted to know what happened, so that’s a great sign. I went and met the producer and the director, and then met Jamie, who plays Jake, and that was it – we had the chemistry read and it was all great.”

Bradley says the appeal of the series, produced by Expectation and Happy Tramp North Productions, is its mix of black comedy and the sharp turns the plot takes through the four-hour running time. If the brothers at the centre of the story don’t know what’s coming, the actor hopes the audience won’t either when Guilt debuts this Thursday on BBC Scotland and then across the UK on BBC2 from October 30.

“It totally snowballs in a very realistic, ordinary, day-to-day way. That’s what’s so brilliant about it,” she adds.

Walter’s only surviving relative, Angie comes to Scotland from the US to tie up the loose ends following his death, only to fall for Jake. But their relationship enters dangerous territory when she begins to suspect Walter might not have died from natural causes.

“She’s very self-contained, cool and she’s not easily fazed,” Bradley says of her character. “She’s completely different for me to play; I’ve never played anybody like her at all. There’s something very chilled and cool about her, which I’m not at all in real life, so that’s great for me.”

With the Dublin-born actor having adopted an English accent in numerous series, the chance to hone an American inflection added to the appeal of playing Chicagoan Angie.

“I love when it’s a different accent because they lend so much to the personality and the character of anybody that you’re playing,” explains Bradley, who was aided by a dialect coach. “Angie is very specifically from Chicago, which is great because the narrower you can make the field and the more specific you can be, the easier it is. Her accent just lends so much to her. It’s the same with any accent – you learn so much about a person. It’s human nature. We all have an accent in some form; it’s also what we do with our face and how we move.”

Though Guilt is set in the Scottish capital, Edinburgh, the majority of production took place in Glasgow. It was the first time Bradley had worked in Scotland, and she praises the “perfect mix” of crew members for making it an experience to remember.

“It’s a rare thing that everybody is so enthusiastic,” she says. “It’s always down to the scripts. Not every member has read them but it just so happened everyone was really excited about the project. There was just such good will towards it. It was a rare thing. Mark Bonnar and I were saying it isn’t every day you get onto a gig like this. Robbie McKillop, the director, has an infectious enthusiasm so you really feed off him and his energy. He’s so enthusiastic and upbeat. Every day was a joy. There was lots of laughter.”

When selecting her roles, Bradley says she tries to avoid characters similar to those she has already portrayed, though her decisions are usually based on whether the material piques her interest, with the aim being to go into a new job with a genuine feeling of excitement.

“If it’s something I really want to tackle and it’s something I’m afraid of, it’s a good sign,” she says. That uncertainty also penetrates her wider approach to acting, with Bradley noting that she’s now more comfortable with the ups and downs of the short-term lifestyle that comes with working in a profession where you may not know what your next job is.

“I’ve been acting since I was a kid and it’s much easier now than when I started out because the uncertainty [about your next acting job] becomes part of the certainty. The longer you’re doing it, you find this is the job as much as everything else, and I’ve started to thrive on that,” she explains.

If there’s ever such a thing as a steady job in acting, it’s being part of a hit returning series. But in May this year, Channel 4 announced that Humans, coproduced with AMC in the US, would not be returning for a fourth season.

Based on Swedish series Real Humans (Äkta Människor), the science-fiction drama imagined a world in which humans live side by side with androids designed to be synthetic humans, known as ‘synths.’

A regular cast member from the outset, Bradley played DI Karen Voss, a police officer who is actually one of a handful of conscious synths, who goes on to have a relationship with her colleague and even portray maternal feelings, all while struggling to understand her status and position in society.

“Strangely, Humans is the perfect example of a brilliant show ending when it was ready,” Bradley says of the decision to end the series. “I always like the idea of the audience wanting more. You want to be part of something that people want to see. So for me, Humans was an amazing job and I met some amazing people. We still are a very close-knit group, but no part of me wishes I could be part of a regular thing. If you’re an actor, you can’t be hoping for that because nothing is certain.

To build the character of Karen, Bradley shaped a backstory with writers Sam Vincent and Jonathan Brackley, knowing from the start that Karen would be a synth pretending to be human.

“But how, as a synth, would you play a human? It was really interesting and great fun,” she recalls. “Me and the choreographer had so much fun exploring body language and walking around London as synths. I spent so much time in the first season sitting in coffee shops watching people and wondering how I would copy them.

“From the get-go, the writers and I knew what was driving her was that she was created for one purpose – to be a mother – but was never allowed to fulfil that purpose. That drove everything, the bad decisions and the good decisions, the kind ones and the cruel ones. So I always understood where she was coming from, even if her actions, particularly in the first season, weren’t great. It was a real journey and it never felt like it was going in a weird direction I hadn’t expected. It always felt completely right. Those writers are geniuses.”

Bradley also likens the movement choreography she had to learn to embody a synth with using an accent, describing an actor’s body as a tool, whether it is being used vocally or physically.

“The more obstacles you have in your way, the more you can really let go,” she continues. “That’s true of so many jobs. The more limits you put on yourself, the more you can actually forget them. There was so much research for the physicality [of Karen] that by the time you got to set, yes, you’d have to remember it all but you’d also have to forget it once they said action in order to do your job properly. So I just had to let go. It was really fascinating playing that character.”

Now with so much drama being produced around the world, for traditional broadcasters and global streaming platforms alike, it doesn’t seem likely that Bradley will struggle to find interesting characters to play.

“I don’t know if that’s because there’s so much more being made or because I’m coming into my own a bit more and have settled into myself as an actor,” she adds. “I don’t know if it’s my age. But the stuff is definitely more interesting now. I never did fit the mould of being the cute, non-threatening girlfriend.”