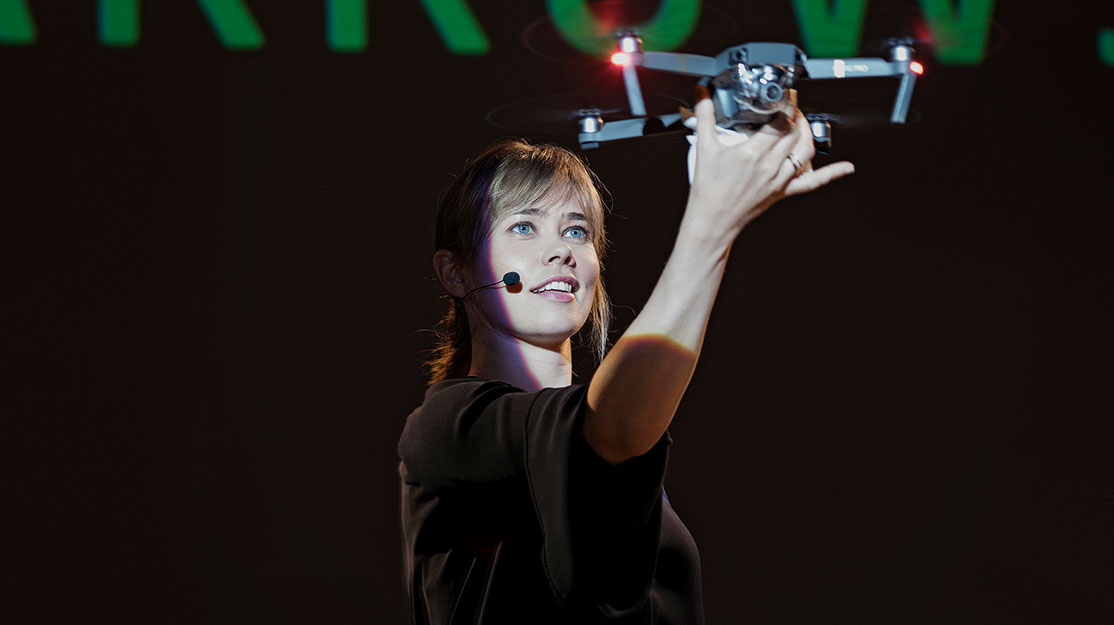 Danish actor Birgitte Hjort Sørensen broke out on the international scene with political drama Borgen and has gone on to appear in Game of Thrones and Vinyl. She’s now back on home soil in Greyzone, a 10-part thriller about a drone engineer taken hostage by terrorists.

Birgitte Hjorth Sørensen became a star at home and abroad for her turn as TV journalist Katrine Fønsmark in celebrated political drama Borgen. Since the three-season series ended in 2013, the Danish actor has gone on to appear in a number of film and television series in the UK and US, most notably in long-running UK crime drama Midsomer Murders, movie sequel Pitch Perfect 2 and HBO dramas Game of Thrones and Vinyl.

Sørensen is now starring in a new Danish thriller called Greyzone, a 10-part series produced by Cosmo Films and distributed by ITV Studios Global Entertainment. The drama follows the events that lead up to a planned terror attack in Scandinavia, centring on Sørensen’s brilliant drone engineer Victoria Rahbek, who is taken hostage.

Her captor is part of the terror cell planning the attack, which has chosen Victoria to access the components it needs from her company. Victoria must risk everything to steal the equipment while also working as a double agent for the police, who will do anything to prevent the attack. However, beneath the hate, fear and prejudice, real feelings start to emerge between Victoria and her captor. But are they able to truly look past their differences and can the attack be averted?

Here, Sørensen reveals why starring in the series appealed to her and how the story chimes with real-world events.

When she read the script, Sørensen was immediately captivated by the thriller storyline…
From the first time I read the first episode, I was drawn in to the story; it felt like a page-turner. I was incredibly excited to see what came next, and that is a rare but really welcome thrill in reading a script. I had no doubts about accepting this. I thought it was incredibly interesting, incredibly relevant and an opportunity for me to dive into a pretty complex psychological behavioural situation that I hadn’t worked with before.

The ambition behind Greyzone was to be very authentic in the way the story is told…
For my part, I read books by people who have been held hostage and I talked to a psychologist who is an expert in helping people when they return from being held hostage. It was just incredibly interesting to learn that the most significant part of being held hostage is not so much the torture or the physical element, it’s the fact you don’t have power over your own life anymore. In a sense, you’re being forced to be a child again. Somebody else makes the decisions, and that creates incredible despair and, in some cases, apathy, which is so destructive because when you lose the will to survive, you’re pretty much dead.

Sørensen believes the drama is “incredibly relevant” in the way it explores scenarios surrounding a potential terrorist attack…
It’s about terrorism, which is everywhere we look today. Almost every day on the news, you see some new attack somewhere. I think it affects all of us; it certainly affects me and I feel a desperate need to try to understand why. That’s what we try to achieve here with Greyzone – to really try to understand the people on both sides and also to reflect a little bit more on how we actually participate, whether it’s by sending soldiers or technology to war or by not taking a stand. For me, at least, it’s made it clear we all have a part in it.

Sørensen says Greyzone raises the bar in terms of the quality of Nordic noir and that she enjoys having a level of ownership in the production…
If I compare Greyzone with some of the work I’ve done abroad, the experience of being on set is very Scandinavian, very homelike to me. We have a very familiar, equal way of producing in Denmark. The actors are invited to really take part – not in writing the script, but our thoughts on the characters are welcomed. That creates a greater sense of ownership for the actors and I think that’s why what we are often appraised for in Scandinavia is that the characters feel really real. When I see some of the material we’ve done [on Greyzone], I think it looks international. It has that feel, so in a way we fit nicely into the line of Nordic noir, but this is something else as well. It’s just raising the bar a little bit.