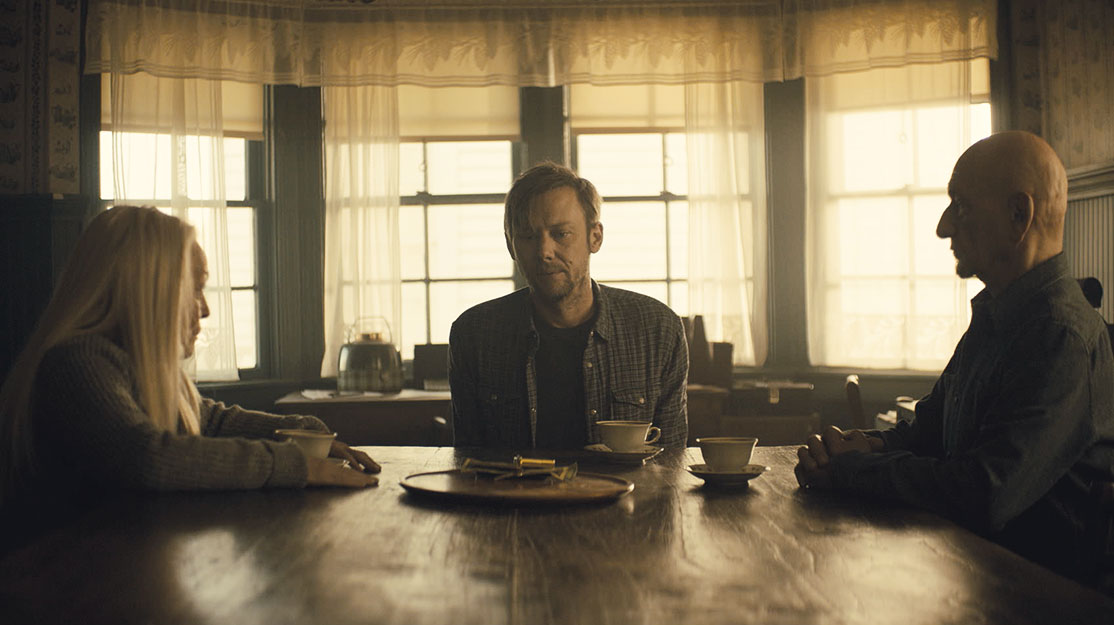 Co-showrunners Steve Conrad and Bruce Terris tell DQ how they plan to disrupt the traditions of crime noir in Perpetual Grace, Ltd, a 10-part series from US cable network Epix and MGM Television.

At first glance, Amazon Prime Video series Patriot has all the traditional hallmarks of a spy drama, and yet it’s so much more than that. Darkly comic, dreamy and melancholic, with more than a splash of folk music, it stands out by the way it stretches the conventions of the genre.

Now showrunner Steve Conrad is taking the same approach to crime noir with his new series Perpetual Grace, Ltd. Created with co-showrunner Bruce Terris, who also worked on Patriot, it’s a show that promises a big personality, from the themes at the heart of the story to the vivid characters and even the western aesthetics of its shooting location in and around Santa Fe, New Mexico.

“If you picture what we do on Patriot, which is take the infrastructure of the spy genre and ask it to hold up a bunch of different fascinations, we do that with Perpetual Grace with noir,” Conrad says. “The characters are never one-dimensional. They want the pot of gold at the end of this thing, but they also desperately want the same thing as everybody else on Earth, which is peace and dignity. That’s just as important to the appetite of our characters as ill-gotten gains.

“So there will be those similarities with Patriot where the world is wide and we try to be splendid and to make a show that you’ll watch and like, but that’s not simple-minded.”

Perpetual Grace, Ltd (formerly called Our Lady, Ltd) tells the story of James, a young grifter who attempts to prey upon Pastor Byron Brown, who turns out to be far more dangerous than he anticipated.

James, a disgraced firefighter played by Westworld’s Jimmi Simpson, seizes a chance to reverse his life’s worsening course. But when his plan veers dangerously off track, James must call on strength and fortitude he did not know he possessed in order to survive.

Meanwhile, Pastor Byron (played by Sir Ben Kingsley) and his wife Lilian (Jacki Weaver), known to their parishioners as Ma and Pa, have used religion to bilk hundreds of innocent men and women out of their life savings. Ma, who appears at first glance to be a modest, dutiful church lady, is Pa’s willing accomplice and his counterpart in regard to potency and cruelty.

Commissioned by US premium cable channel Epix and produced by MGM Television, the series launched on Sunday. MGM is also distributing internationally.

The roots of the series can be found in Terris’s desire to write a drama about identity, but not just a thriller about a case of stolen identity. “The central tension of those dramas is almost always really good surface tension but I thought that a deeper tension might be what’s underneath,” he explains. “In that way, it’s this idea that if James is someone who tries to escape problems by assuming the identity of someone else, you better make sure that person is not in worse trouble than you are. That’s the central hub of the idea that I brought to Steve. Then we just took it from there.”

James is a character who has had a run of bad luck and made some bad decisions, but still clings to the hope that he can turn his life around. But he then makes another bad decision in an attempt to fix things.

“We’re studying how out of desperation, and only facing the most desperate odds, you can actually hope to save yourself. It might become survival,” Conrad explains. “So James finds himself outmatched by the power of a man he thought was powerless, and he made a terrible mistake when he picked Byron Brown to prey on. Now he finds himself in the middle of a heavyweight fight he hadn’t prepared for, but he can’t leave the ring.

“Jimmi Simpson is just a guy with that light in his eye that I’ve been hoping to work with for a long time. The way he delivers human beings, they’re complicated but they have a simple-mindedness of purpose which is to get over and find safety somehow. He’s instantly likeable but also somehow a tremendously nuanced actor. He’s going to fit right into the way Bruce and I convey this fictional world.”

Opposite Simpson is Kingsley, who has played Ghandi, ferocious Sexy Beast gangster Don Logan and every character in between during his storied screen career. “There’s no safer bet than Sir Ben in terms of the way we are going to throw everything that humans are capable of into the course of this guy’s story,” Conrad continues. “He’s going to say and do almost everything humans say and do when they’re desperate.”

Perpetual Grace, Ltd also follows Patriot’s lead in its use of supporting characters. “Everyone gets heavy lifting in this show and they’re all material to the unravelling of the plot,” Conrad notes. “These characters find themselves having to depend on each other just to survive.”

Terris continues: “Coming up as a writer, Steve really mentored me, and one of the things I noticed in all of his scripts was there truly were no throwaway characters. That waiter or waitress had a story. The finest drama you can construct is one where you explore all their stories and you learn about everyone. The person you think is going to be an ‘extra’ becomes a fully fledged participant in the drama that unfolds.”

Conrad and Terris opened their writing room by first figuring out how they wanted the story to end. Once that was decided, they simply watched movies for a couple of months, making a staff writer position on the show the latest entrant for ‘best job in the world.’

“The first week is fun and then you get to the second week and you think, ‘Are we really just wasting time?’” Conrad admits. “But then we open the room and we have four writers and an assistant, and all we do is sit in a room and talk about how to most intricately and expertly convey this story in relation to films that have done this before.”

For example, Conrad talks about the moment in Al Pacino’s 1975 bank heist film Dog Day Afternoon where viewers know the robbery is going to fail, but what makes them continue to watch? Similarly, what makes viewers sit up and pay attention during high-stakes moments in 1998 crime thriller A Simple Plan?

“That sounds boring but we did this theoretical engineering of plot for months and months,” he continues. “Then we’re left with very little time to write the scripts because it’s time to turn them in, so we just write all day and night.”

Even at the moment DQ speaks to Conrad and Terris last October [2018], they are spending their days location scouting in Santa Fe before returning to their rental house to continue writing. Despite having a writers room, only they have written the scripts. “But the story’s figured out. You don’t have the blank page and you don’t bang your head on the desk,” he adds. “You just have to write it.”

As showrunning partners, Conrad and Terris will each write pages and then swap them for revisions, ensuring responsibilities are split equally. Terris has been on location scouts, while Conrad also picks up directing duties, helming six of the 10 episodes.

It’s more common for writers to become directors, rather than the other way around. Terris has found himself having to stop worrying about budgets and deadlines in order to focus on the story. “So I will instantly think, ‘You can’t write a scene on a train because nobody will let you shoot on a train.’ And Steve will have to remind me that I’m not the AD, I’m a writer – and if a scene demands that it’s set on a train, you write it,” he says. “And then later on you might have to cancel it. So it’s been hard to drop the baggage from the other side of production and let my creativity flow.”

Behind the camera, Conrad must balance the demands of multiple genres, blending camera angles that create suspense with sweeping vistas associated with westerns and the show’s Santa Fe setting.

Then there’s the fact that Perpetual Grace, Ltd will arrive in a television landscape filled with more than 500 series in the US alone. But Conrad is unconcerned by the competition. “We’re going to try to make something very, very good. If you can accomplish that goal then there is something distinctive about that show,” he says.

Terris, in his first showrunning role, is “totally psyched” about the job. “This is a thrill for me,” he adds. “When you’re in the 11th hour or 12th hour of shooting and you’ve got one more scene and you’re exhausted, the trick is you must gather the energy to go and be excellent, and not just throw that last scene together. Demand excellence. I’m looking forward to the challenge.”