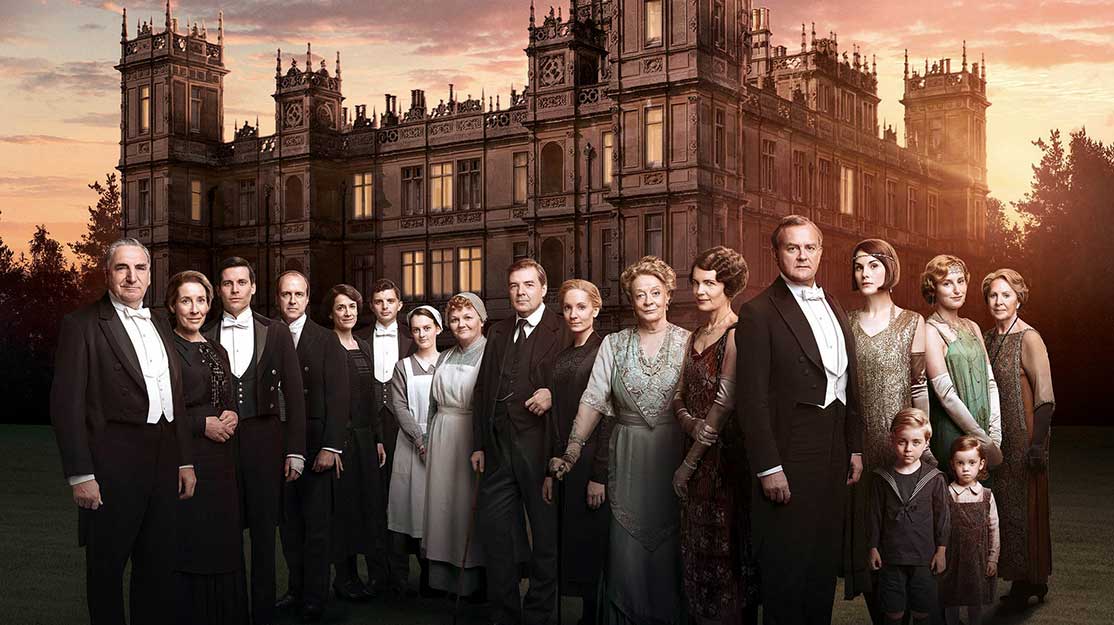 As Downton Abbey enters its sixth and final season, those to have played their part in the wildly successful period drama, both behind and in front of the camera, bid an emotional farewell. Michael Pickard reports.

As the emotion-tinged trailers playing on ITV declare, it’s time to say goodbye to one of the biggest successes of recent television history.

When Downton Abbey returns for its sixth season, it starts the countdown to the period drama’s last ever episode, which will air in the UK on Christmas Day.

Viewers will return to the country estate of Downton Abbey in 1925, when secrets and rifts threaten the unity of its primary inhabitants – the aristocratic Crawley family – while their servants below stairs navigate social changes that put their futures in jeopardy.

After six years on air and with a possible movie in the works, it’s fair to say the show is a worldwide phenomenon. Airing in more than 250 countries, Downton is the highest rating UK drama of the past decade across any channel, according to ITV, with an average of 11 million viewers over the course of the last five seasons (including Christmas specials).

In the US, where Downton airs on Masterpiece on PBS, season five had a weekly average audience of 12.9 million viewers and was watched by 25.5 million people.

ITV director of television Peter Fincham says that while commissioners can never tell if a show will be a success, he loved Downton from the beginning.

“We loved the script. We heard filming was going very well. We thought it was wonderfully cast,” he says. “If I were in the business of teaching television drama and I wanted to choose the best first episode in terms of exposition and introduction of characters, it would be the very first episode of Downton Abbey.

“Of course, Downton Abbey has an image as a posh series about posh people but one of its great achievements is its even-handedness between upstairs and downstairs. The lives of the characters downstairs are as richly drawn as those upstairs. We are now getting to the end and we absolutely respect Julian (Fellowes, creator and writer) and Gareth (Neame, executive producer)’s feeling that this is the right time to bring it to an end – to leave the audience wanting more. We’re very grateful for Downton Abbey. It’s been a wonderful series on ITV.”

Neame, MD of Downton producer Carnival Films, recalls taking the project to ITV with Fellowes, and says they never once approached the BBC: “It was always destined for ITV. We always saw it on Sunday nights at 21.00 in a very broad entertainment channel because it was about telling a new story and rebooting this much-loved genre.

“It’s been part of a real golden age of drama at ITV and we’re also thrilled that this has been a truly British representative in this golden age of drama around the world, where a British show can really punch above its weight alongside those shows we all revere from the US.”

Fellowes admits he toyed with ending Downton Abbey after season five but felt he needed one more season (eight episodes, plus the Christmas special) to resolve the numerous storylines.

Not everything will be wrapped up, however. “You always leave slightly open-ended stories because life is an open-ended story until you die and you can’t kill the entire cast,” he says. “We haven’t plugged everything but we’ve shown what the next chunk of everyone’s life would be. I think it’s satisfactory; I hope it is.

“There’s always a concern that with any show, you don’t want it to go on, fall away and start to dwindle. We can all name favourite shows we adored for the first three or four seasons and then gradually lost interest in. We wanted to go out when people were still sorry. It seems the right time to go when we’re still firing.”

While Fellowes created the series, he says the writing process has often been a collaborative process between himself and the cast. In particular, he says Mrs Patmore – the cook portrayed by Lesley Nicol – wasn’t supposed to be funny to begin with. But when he realised how funny Nicol was, he started writing humour into her lines.

Many among the cast admit working on a show as successful as Downton is likely a once-in-a-lifetime experience.

Joanne Froggatt (Anna Bates) admits that none of the cast thought they’d remain on the show for six years: “I never imagined Anna would go through so much, so as an actor I’ve been extremely fortunate to have such fantastic scenes to play and have Brendan (Coyle, who plays Anna’s husband John Bates) to play with. We’re all proud we’ve got Downton on our CV.”

Echoing a sentiment shared by many of the cast, Froggatt adds: “We are a true ensemble. Downton is a show in which, as characters, we’re either supporting a scene or leading a scene. We all have our share in both roles. That’s what makes it so nice. I had the most amazing support when I was leading scenes and you do it for your fellow actors.”

Filming on Downton finished in mid-August, with weeks of goodbyes as cast and crew said farewell to locations and each other until the final scenes were filmed.

“When we wrapped up filming at Highclere Castle (which stands in for Downton Abbey), that’s when it started,” says Michelle Dockery, who plays Lady Mary Crawley. “It felt like we were giving the house back to the owners. It’s an emotional time but it’s also exciting because we’re just celebrating all the time. It’s changed all our lives and opened up opportunities. We never imagined it would have become this much of a success, so I feel very fortunate to have been part of the Downton family.”

Dockery praises Fellowes’ writing as a key reason for the show’s success and says that while other cast members left mid-series and moved on to other projects, she couldn’t have made the same decision.

“After season three, when we were all in negotiations to do four and five, there was certainly a moment where I thought, ‘This may be my time to go.’ But I couldn’t bear the idea of watching the show and not being a part of it. In the end, the decision was made for me because I wouldn’t have liked that.”

For Hugh Bonneville (Robert, Earl of Grantham), the final days of filming Downton were a time for reflection. “I didn’t have grey hair in season one,” he says, “so you look back on six years and realise we’ve been on quite a rollercoaster together. I’ve never had an experience like this before and I probably won’t again. I doubt any of us will – to have something where every department on set has worked to the top of its game and to have been embraced by an audience to this extent.

“We’re in the middle of the hurricane, so we don’t really realise the impact it’s had and it will take a few years to realise what it’s meant for all of us. It has been a uniquely happy experience. The fact we’re all still pals after six years is surprising and a testament to something. It is a genuine ensemble – the only lynchpin is the house. None of us is indispensable and it’s been a great lesson for all of us.”

The final group scene to be filmed featured the servants in the downstairs quarters. Once wrapped, it fell to Jim Carter, who plays Carson the butler, to say a few words. However, as he recalls, it all became very emotional.

“We filmed the last scene of the series in a candle-lit servants’ hall with all the servants,” he says. “The producers came in and said thank you, and I thought I’d say a few words about the crew, and then I just filled up completely. I turned round and a big rigger was in floods of tears. Phyllis Logan (Mrs Hughes) was a dreadful mess on the floor.”

But after six years in the same role, Carter is relishing the chance to play different characters.

“In reality, it’s job done and you move on,” he explains. “I’m not being cynical when I say that, that’s just what we do. But it has been a lovely job and an unprecedented success – something none of us have experienced before or probably will again.

“For some of the youngsters, this is the first job they’ve done. Well, kids, life isn’t going to be like that forever – you’re not always going to be turning left on the plane! I want to do new things and different things, but I’m incredibly grateful to Downton. We’re not creatures of routine, generally speaking.”

Carter, who believes TV commissioners should be braver in backing writing talent, also speaks fondly of his character’s endearing relationship with Mrs Hughes, who at the start of season six are setting a date for their wedding: “We’ve moved together with all the haste of a glacier, but I think the will is there for the people who watch it for us to get together. It’s realistic that people with that close working relationship become friends and become fond of each other.”

The last word, however, falls to Laura Carmichael (Lady Edith), who filmed her last lines several days after that final servants’ scene that caused so many emotions to bubble to the surface.

“It’s been such a joy, all of the goodbyes, as much as it’s been sad,” she says. “It’s an alchemy of everything coming together perfectly. All departments are so strong; the look of the show is so mega and it coincides with this incredible script. You can’t underestimate how each department is responsible for the success. People are so kind about the show. It sits in a really nice place for families of all generations. People love to love it, it’s an infectious feeling and I feel so proud to be a part of it.”

Downton could receive more accolades after winning nominations for this month’s Emmy Awards, while there is promise of further prizes next year after the series’ conclusion. For cast and crew, the close of the show represents the end of a unique chapter of their careers, while ITV will hope its recently announced eight-part drama Victoria, starring Doctor Who’s Jenna Coleman as the young Queen Victoria, can recreate in some part the global success of this iconic British drama.