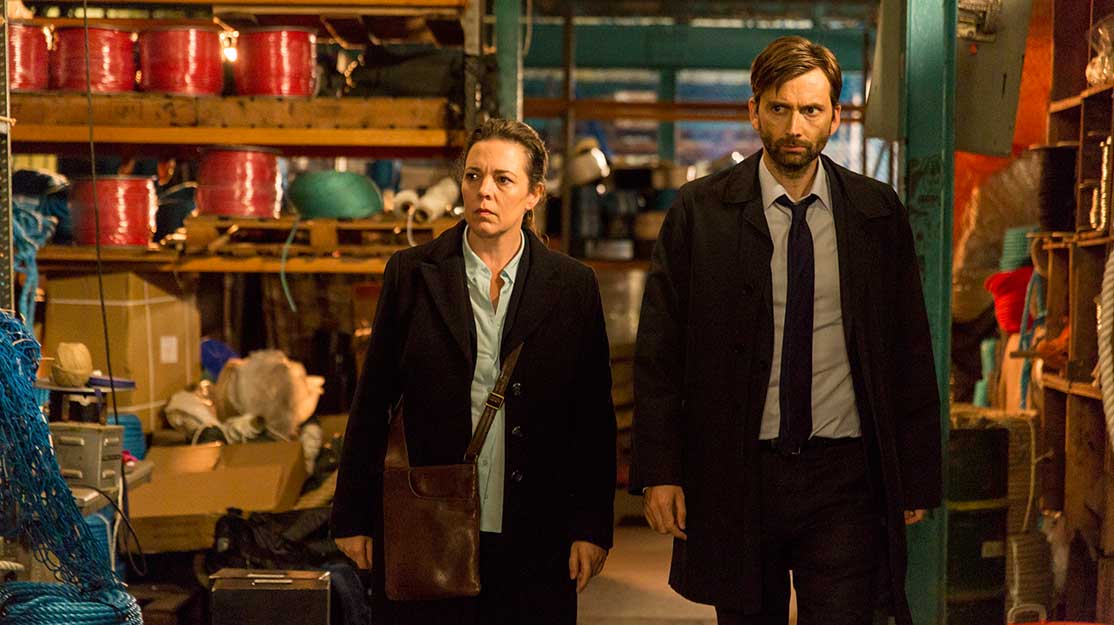 It’s the beginning of the end for Broadchurch as the third and final season debuts on ITV. Stars David Tennant and Olivia Colman and creator Chris Chibnall reflect on the show’s success.

It’s an increasingly common trend in television drama that viewers head into a new season of their favourite show knowing it will be the last time they will visit this set of characters. Fans of the past two seasons of Broadchurch will know, however, that the show’s third and final season is unlikely to be a happy occasion for many of the residents of the coastal town.

Still picking up the pieces from the events of season one and two, in which – spoiler alert – Joe Miller killed schoolboy Danny Latimer but was subsequently found not guilty in court, season three sees DI Alec Hardy (David Tennant) and DS Ellie Miller (Olivia Colman), pictured above, investigating a serious sexual assault in the community.

Jodie Whittaker and Andrew Buchan return to play Beth and Mark Latimer. They are joined by Julie Hesmondhalgh, Lenny Henry and Georgina Campbell along with Sarah Parish, Charlie Higson and Mark Bazeley.

All eight episodes have once again been written by series creator Chris Chibnall. Broadchurch is produced by Kudos, Imaginary Friends and Sister Pictures for ITV, and distributed by Endemol Shine Distribution, which has sold it to 180 countries worldwide. Remakes have been produced in the US (Gracepoint) and France (Malaterra).

“When Chris first sent me the script for the opening episode of Broadchurch six years ago, I was struck by one defining element,” says executive producer Jane Featherstone. “I loved the characters, I loved the beauty of the world, I loved the powerful whodunit narrative, but above all I loved the way it explored a small-town community in such depth. Chris’s intention was always to inhabit a space that meant we could stay with our characters and our town after the crime had happened, to really examine the long-term effects of a tragic incident on a community. Our characters had lives before we joined them and they will continue to exist after we have gone.

“The great privilege of longform storytelling is building a meaningful relationship between our characters and the audience, and I am excited for the audience to see how Ellie, Hardy and the Latimers have fared in the last few years. It is a fond farewell for those of us involved in the series for so many years but, as far as I am concerned, the community of Broadchurch will carry on living long after we’ve gone.”

Chibnall describes the series as an “extraordinary journey” that now comes to an end with a new investigation into a serious sexual assault. Since second season finished in 2015, he has been working with script executive Samantha Hoyle and support organisations, police and survivors to research the storyline.

“To explore this, I needed to call on DS Ellie Miller and DI Alec Hardy one last time. This story begins three years after we were last in Broadchurch. Lives have moved on. Some people have left, some have arrived – and there’s a new case to test this old partnership. There are new suspects, new revelations and fresh truths to be confronted in the lives of Broadchurch’s residents.”

Former Doctor Who star Tennant admits he will miss Broadchurch, playing DI Hardy and working alongside his co-stars.

“It is sad to think we will never return to this world and to these characters because I feel so fondly towards them, but I will always feel proud to be associated with this show,” he says.

“There is a massive personal legacy having worked on this show. We all feel like we have been doing something very special and that we are all a part of each other’s lives now, so I’ll miss seeing people every day but hopefully I will see them fairly regularly. I will certainly miss Chris’s scripts but I look forward to watching them elsewhere and I hope it won’t be the last time we will work together.”

Season three sees Tennant’s police officer more settled in Broadchurch, with more focus on his relationship with his daughter Daisy as he rallies against the attacker he is hunting down.

“His focus becomes trying to understand the person who would commit this crime, trying to get inside their skin, and that is something he struggles with initially,” Tennant adds. “That has been an interesting conflict to play, Hardy trying to come to terms with what sort of man would do this and almost feeling ashamed for his own gender, which has been a very interesting take that Chris has afforded him this series.”

Part of the charm of watching Broadchurch has been the chemistry between DI Hardy and Colman’s DS Miller – and Colman says this is purely down to her being such good friends with Tennant.

“Chris Chibnall has written them brilliantly,” she says. “They are really good mates – possibly each other’s only mate. It feels like they have been friends for longer than they have, the way they bicker but they clearly deeply respect each other and would staunchly defend each other against other people.

“It really helps that David and I get on so well. You can sort of tell that Hardy and Ellie like being together because David and I like spending time together. It makes it much easier. I will miss working with David – if we could stand next to each other on set every day, I would be so happy. We giggle, he is never late, knows all of his lines… He is a dream person to work with.”

The topics raised in season three also struck a chord with Colman, who has experience with the subject of sexual violence from previous roles.

“So I have become passionate about all of these issues – violence against each other, and that ties in with sexual assault obviously,” she explains. “I’m really pleased to be a part of this story and it’s amazing how people don’t know how common this is. People need to know, I think.”

From the chilling opening of season one, where the body of a young boy is found on the beach, to the nail-biting court case of season two, Broadchurch has always kept viewers on the edge of their seats and, with more shocking revelations to come in season three, it looks like it will do so once more.

Chibnall adds: “It’s been a strange, mad honour to experience the passion of audiences for this story and these characters. But all good stories come to an end. I hope this one has enough twists and turns, laughter and tears to go out in style.”