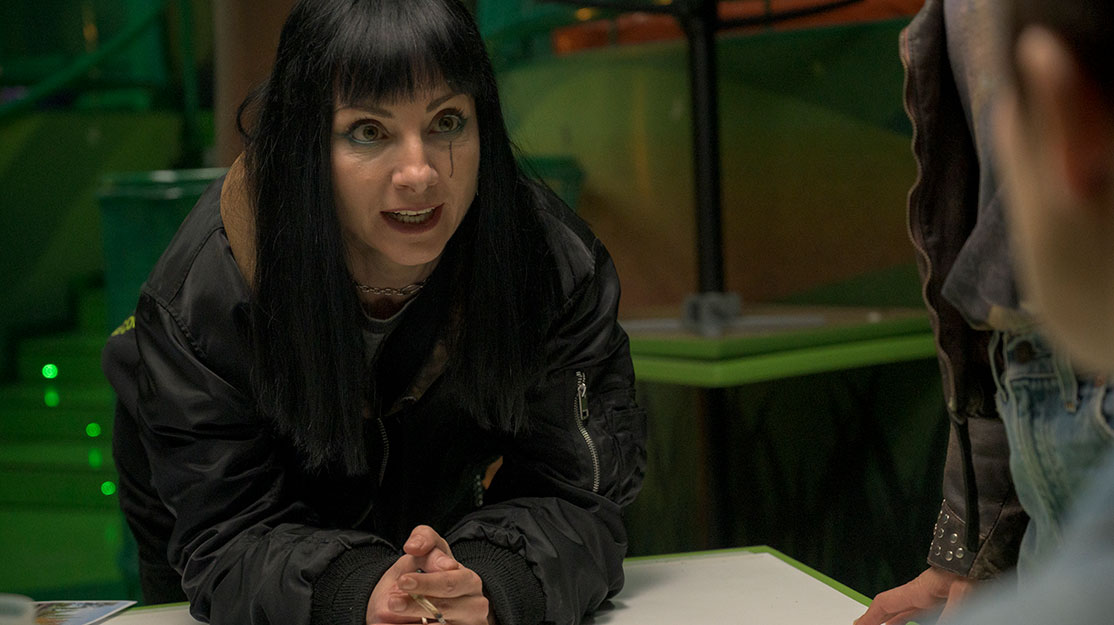 Good to be bad

Spanish actor Najwa Nimri discusses filming the final season of prison drama Vis a Vis (Locked Up), joining the cast of La Casa de Papel (Money Heist) and why she doesn’t have a stunt double.

For more than two decades, Najwa Nimri has juggled dual careers as a film star and a singer. But it’s only in the past few years that she’s achieved global fame, thank to two Spanish TV series that have taken the world by storm.

First came Vis a Vis (Locked Up), a show set inside a women’s prison. Nimri plays Zulema, the most dangerous inmate, who immediately clashes with Macarena (Maggie Civantos), the protagonist who must quickly learn how to survive behind bars after being convicted of tax crimes.

The thriller won acclaim at home for its realistic, often brutal depiction of prison life, airing for two seasons on Antena 3 before Fox España picked up the show for a further two seasons. But such was the clamour among fans to find out what happens to Maca and Zulema that a spin-off, Via a Vis: El Oasis, was commissioned. It aired locally in 2020.

The show also won legions of fans around the world, not least in the UK, where Vis a Vis aired on Channel 4 and became a flagship series for the broadcaster’s non-English-language streamer Walter Presents. El Oasis debuted on the platform in August.

Set outside the confines of the Cruz del Sur prison, the show finds Zulema and Maca planning one final heist together after spending years carrying out robberies. Their final job will see them attempt to steal a diamond tiara from a hotel in the middle of the Almería desert. However, neither Zulema nor the rest of their team know Maca is pregnant and has cut a deal with the police to turn her partner in.

“Zulema was a real pain in the ass but the audience was screaming for the character [to return],” Nimri tells DQ. “At the beginning, there was nothing in her soul. Then she started growing like a disease. Most of all, people felt really connected to the suffering of this woman. Then I felt that responsibility – I don’t know why, because it’s not like me usually – and I kept going with the character until El Oasis. Now, one year later, I feel a big relief. It was tough to play this woman.”

While Zulema cuts an intense figure on screen, Nimri says she was a fun character to portray, not least because of all the action scenes involving the character.

“It was fun at the beginning, it was fun at the end, and I don’t have a stunt double,” she reveals. “I played everything, all the action scenes, the cars, the running… I do it all. A lot of actors have stunt doubles but I like to play the whole thing, to do the full job. But the thing is, you’re pretty tired at the end. You end up super tired. It was physically exhausting because I’m almost 50 now. I just want to chill! And emotionally it was pretty hard too, but it was fun. I loved to play the villain.”

Vis a Vis was Nimri’s first TV role after a film career that was recognised with Goya nominations for her parts in Quién te cantará and Lucía y el sexo (Sex & Lucía) at Spain’s national film awards. But the actor doesn’t now see working in television or cinema as a choice she can make.

“I loved playing Zulema,” she says. “The thing is that nowadays, it’s not a choice if you do cinema or TV. Being on a big platform is not an option. Here [in Spain] and in Hollywood, if you don’t do it, you’re dead. You have nothing to do. It’s not an option – but I love TV.”

Two years after Vis a Vis first aired, the show’s creator, Alex Piña, again partnered with Antena 3 for another series that would also become a global hit. La Casa de Papel (Money Heist) introduced the Professor (Álvaro Morte), who assembles a crew to carry out an audacious robbery inside the Royal Mint of Spain. The series was later picked up by Netflix, which ordered further seasons , this time with the Professor reassembling the gang to target the Bank of Spain.

It was in season three, the first to land on Netflix, that Nimri joined the cast as Alicia Sierra, a pregnant inspector who is put in charge of the police operation to retake the bank after previous inspector Raquel Murillo (Itziar Ituño) falls in love with the Professor and joins his crew.

With the show produced by the same team as Vis a Vis, “they called me to take one of the roles, but I was doing cinema – I was doing Quién te Cantará with Carlos Vermut,” Nimri says of the initial casting process. “It is an incredible movie, so I decided not to go. Then they had all the success and I called Alex and the casting director and said, ‘I want to play with you! I want to be there,’ and they put me in.”

Having previously worked with Piña, the actor knew exactly what she would be getting into – and how exhausting it would be. But despite the physical demands of both roles, she believes both Zulema and Alicia are types of female characters that have long been needed on TV.

“Both series required the same thing: an amazing amount of energy,” she says. “You have to go on set with super-high energy. They are complicated roles and we realise now that people are prepared to watch these kinds of women, but we didn’t know before. I’ve always been ready to play these kinds of women. I used to get bored with the scripts I used to get. I get scripts for women of my age but I don’t want to play the mother for the rest of my life.

“I kept touring and making music and doing my stuff because I can be happy doing those things too. Then when the villains came into the world, it was my time! I said, ‘OK, I don’t mind being the villain.’ I have some of the qualities required to play a villain, and it’s fun.”

As for any comparisons between these ruthless and merciless characters, “one has fucked up her life, and one is fucked up by the system. Both of them are fucked up!”

Nimri will next be seen on screen as the host of reality series Insiders, another Netflix show. It features 12 contestants who think they’re in the final round of casting for a new reality show, when in fact they’re already being secretly filmed in a competition where €100,000 (US$116,000) is at stake.

Meanwhile, arguably her biggest love – music – combined with her TV work to great effect when she covered La Casa de Papel’s signature song, Bella Ciao, which originated as an Italian protest song in the 19th century.

“That was improvised,” the star says. “I was doing ADR [automated dialogue replacement] for a film and I produced a little version of Bella Ciao, one that is super scary. All the versions I had heard were super happy and fun, with a high speed and quick beat. But I thought the song needed a different spirit. Alex loves it and it ended up in La Casa de Papel, but it wasn’t planned.”

She adds: “Cinema and TV is what I do for a living, but I love music. Music is the key. Nothing is like music, nothing in the world. For me, it’s a private moment. I can do it by myself,  or I can do it with thousands of people. Real actors say they love to do theatre; my theatre is going on stage with music.”