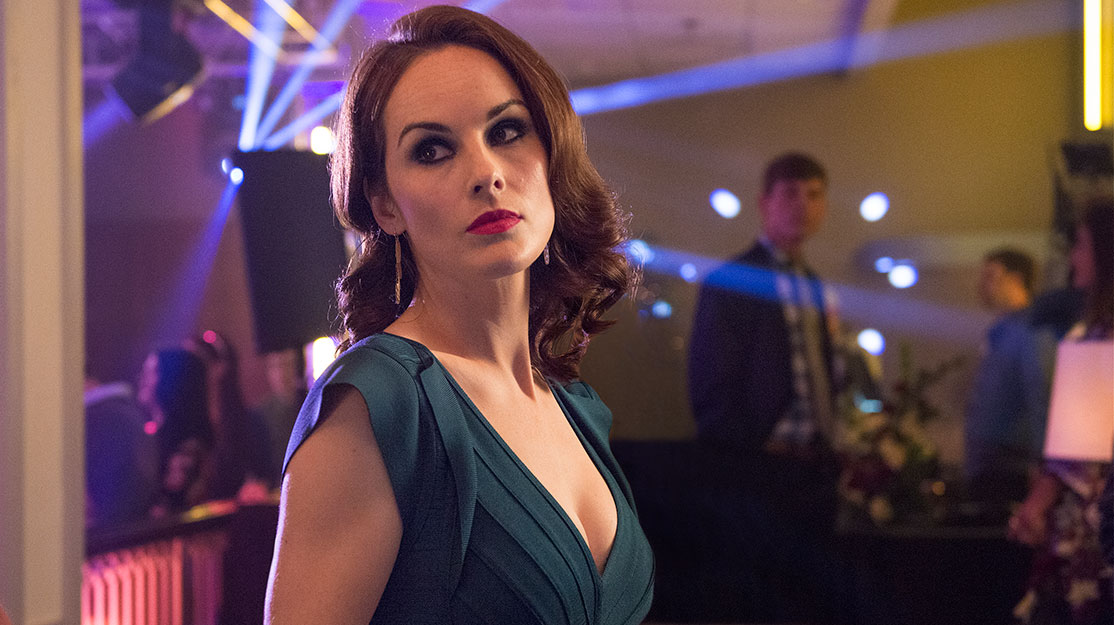 Michelle Dockery sheds her Downton Abbey image in TNT thriller Good Behavior, which is returning for its second season this month. She tells DQ about leaving Lady Mary behind for a life of crime in the US drama – and previews her upcoming Netflix series Godless.

As Downton Abbey transformed from a quintessential British period drama into an international hit series, its young cast became overnight superstars. Subsequently, Lady Sybil Crawley and Matthew Crawley were both killed off as the actors who played them – Jessica Brown Findlay and Dan Stevens – went in search of new projects after two and three seasons respectively.

One star stayed put, however, alongside more established actors such as Maggie Smith and Hugh Bonneville. Michelle Dockery played Lady Mary Crawley in the ITV drama for its full six-season run (and several Christmas specials), perhaps running the risk of becoming singularly known for her part in the Julian Fellowes-penned series.

But while some viewers will always remember her as Lady Mary, the actor opted for a complete change of pace for her next role and put some distance between her and Downton. Quite literally, in fact, as she travelled to the US to star in cablenet TNT’s Good Behavior.

Following a successful pilot, a full 10-part first season debuted in November 2016, with season two set to launch in the US on October 15. The show is now also airing in the UK on Virgin Media, which launched season one on September 11, with the first six episodes immediately available on demand before subsequent episodes were rolled out ahead of the start of season two.

Pitched as a seductive thriller created by Chad Hodge and Blake Crouch, based on the books by Crouch, it tells the story of Letty Raines (Dockery), a thief and con artist whose life is always one step away from implosion. Fresh out of prison, she hopes to stay out of trouble while reuniting with her 10-year-old son, who is being raised by her mother Estelle (Lusia Strus), and fulfilling mandatory meetings with parole officer Christian (Terry Kinney).

But chaos ensues when she overhears a hitman (Juan Diego Botto) being hired to kill a man’s wife and sets out to derail the job, entangling both of them in a dangerously captivating relationship.

“I was still on Downton when this one came along,” recalls Dockery, who was nominated for Emmy and Golden Globe awards for her role as Lady Mary. “We were towards the end of the last season and my agent in America said, ‘You must read this pilot.’ She loved it and I read it and fell in love with the part.

“From the get-go, my heart was with Letty all the way. There’s something about the writing; it’s so character-driven and you instantly know this person and empathise with her. I just loved how flawed she was and with such complexity. Then they offered me the part. I was really surprised at the ease at which everything went after that. After Downton, I thought I’d have a big rest after six years, and suddenly I was on a flight to the States to do this pilot. So it wasn’t something I was actively seeking, nor was I seeking something so vastly different. It just came my way. She’s just a riot. She’s really fun to play.”

Despite a radical move between genres, from a period drama to a thriller,  the differences between working in the UK and the US are less drastic – apart from longer hours, Dockery says. “In American television, it’s not unusual to do a 15-hour day, so you’re really on this hamster wheel and if you step off, you’ll end up in bed for a week with a cold so you have to keep going. But the filming process was very similar. For me, it was the hardest I’ve ever worked in my career.”

The actor reveals she was constantly learning lines – and perfecting her American accent – to keep on top of the nine-day shoots for each episode, with filming taking place in Wilmington, North Carolina. She found support in fellow actor JD Banks, who would run lines with her as well as helping Spanish actor Botto with his pronunciation.

The biggest difference, however, was moving from an ensemble player in Downton, albeit one of the main stars, to being the lead of a major US television drama.

“On Downton, Mary was a prominent role but I had time off when I wasn’t in it, and you are supported by everyone there. But here, if I have a day off, everyone has a day off,” Dockery says. “Letty’s in every scene so it was certainly a lot more pressure. I have to look after myself on a show like that, eating well and just sleeping as much as I can. But it’s a wonderful part to play. I really enjoy playing her.”

After Good Behavior, Dockery will next be seen in Netflix western Godless, which debuts worldwide on November 22. The six-part series centres around Frank Griffin (Jeff Daniels), a menacing outlaw who is terrorising the west as he hunts down Roy Goode (Jack O’Connell), his son-like partner turned mortal enemy. While Roy hides at Alice Fletcher (Dockery)’s ranch, Frank’s chase leads him to the quiet town of La Belle, New Mexico – which is mysteriously home only to women.

“It’s just this seven-part epic Western,” Dockery says. “But the thing that’s unusual about it, and wonderful and brilliant, is it’s very female-driven.

“Aside from that, being in a western is every actor’s dream. We had cowboy camp where we had gun training and horse-riding, which was very different from any riding I did on Downton. New Mexico [where Godless is set and filmed] is breathtaking and just being part of such a massive ensemble on that was amazing.”

After leaving Lady Mary behind – save for the finally confirmed Downton Abbey film – Dockery says she now intends to “keep mixing it up” in the search for more varied and challenging roles. “I’m always drawn to these women who are flawed, like real women, and that’s what we’re seeing more of in television,” she adds. “I feel part of this change now that’s happened in the last 10 years of television, where women are being portrayed in a much truer way. These last few characters I’ve played I’ve really been lucky with.”