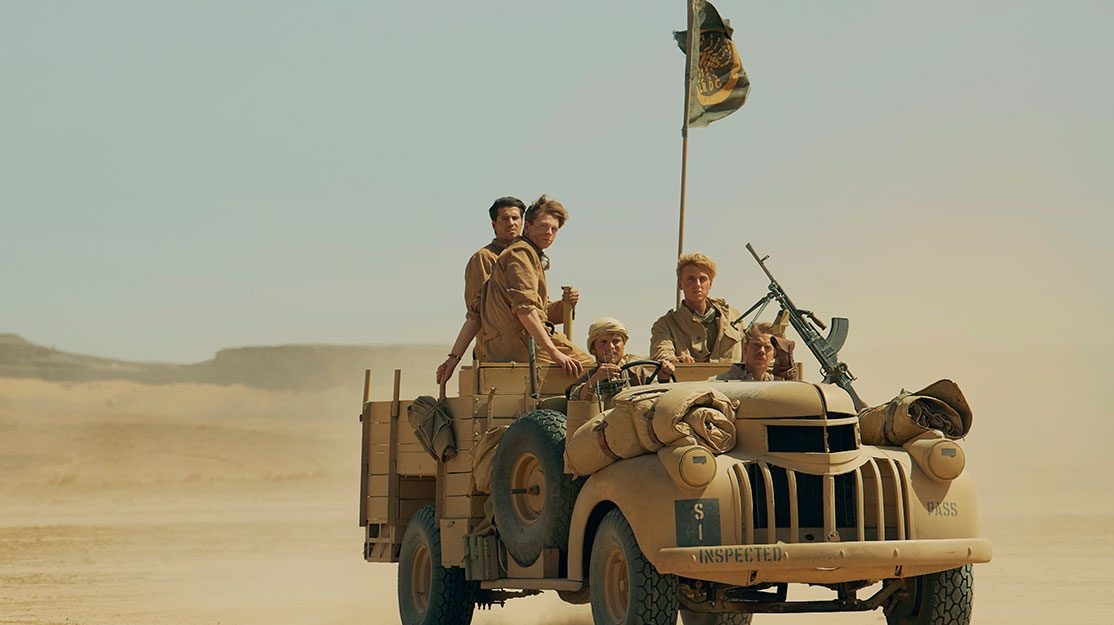 Martin Haines, executive producer of upcoming BBC series SAS: Rogue Heroes, tells DQ about linking up with Peaky Blinders creator Steven Knight for this story about the birth of the special forces unit.

From Utopia and Broadchurch to The Tunnel and Humans, UK production company Kudos is responsible for some of the biggest British hits of the last decade. Yet it’s an upcoming series spearheaded by Peaky Blinders creator Steven Knight and set during the Second World War that joint MD Martin Haines describes as the biggest show ever made by the London-based outfit.

Based on the book by Ben Macintyre and filmed on location in the UK and Morocco, SAS: Rogue Heroes dramatises how the special forces unit was formed in the darkest days of the conflict.

Opening in Cairo in 1941, the story introduces David Stirling, an eccentric young officer who is hospitalised after a training exercise goes wrong. Convinced that traditional commando units don’t work, he creates a radical plan that flies in the face of modern warfare and fights for permission to recruit the toughest, boldest and brightest soldiers for a small undercover unit that will create mayhem behind enemy lines. More rebels than soldiers, the men in Stirling’s team are every bit as complicated, flawed and reckless as they are astonishingly brave and heroic.

Now in post-production ahead of its launch on BBC One and BBC iPlayer later this year, the six-part series is “the biggest show we’ve ever made, in terms of budget and scale,” says Haines.

Kudos announced it had acquired the rights to Macintyre’s book three years ago with the ambition to create a “major drama series” with an iconic British brand at its centre. “At the time, we were looking for something that had a really strong British brand but had the scale and the longevity to travel internationally, if it became popular in the UK,” says Haines, who is an executive producer on the series.

“It’s obviously very different from [Netflix royal drama] The Crown, but it has a recognisability internationally and a scale that goes from 1940 right up to the present day in terms of what the SAS are doing. They have been involved in every significant conflict and lots of history along the way.”

A “brilliant” writer was then needed to stamp their vision and voice onto the project, with history enthusiast Knight – whose father served in North Africa in a different campaign – immediately responding to the source material. “It’s one of those things that doesn’t need much pitching. ‘Steven Knight does his take on the SAS origin story’ is not the most challenging pitch I’ve ever had to do,” Haines adds.

With Peaky Blinders coming to an end, on the small screen at least, following the launch of the sixth and final season last month, Knight has found many parallels between that show’s central Shelby family and the characters who would come to form the first iteration of the SAS.

“One of the things we talked about right at the start was how, if you look at Peaky, the importance of family, a dysfunctional family, and strong family ties runs through the series,” Haines says. “And actually, the SAS is a family. It’s a family of people who were misfits and renegades, who didn’t quite fit in anywhere, in any regiment. When they came together, they found a sense of belonging in this unit led by these two eccentric, very driven but unique characters that they didn’t feel before.

“There’s a lot of toxic masculinity in there as well. Steve draws male characters that are complex and often violent, brutal and brutalised. But he’s also brilliant at showing how they’re vulnerable and suggesting what their backstories might have been to make them the way they are. That was just such a brilliant take on those guys because they were very tough, often very violent men. But Steve shows them as whole human beings and whole characters. He saw it as an opportunity to tell that secret history in a way that was entertaining and accessible.”

O’Connell was cast first, and when he did a chemistry read with Swindells over Zoom, “everybody just recognised they had this brilliant chemistry,” Haines says. “Even though Connor is a young man, he really owned that character and he had a real authority. He let Jack have his space – Paddy is a massive character himself – and it was good that they could let each other have space to perform.”

Then Allen was cast as Jock, a character with inner rage. “He’s someone who was quite ‘stiff upper lip’ and didn’t show very much emotion, and Alfie manages to combine that with demonstrating an inner struggle and a complexity we all loved.”

Also playing a pivotal role in the drama is Sofia Boutella (Modern Love) as Eve. While the story primarily focuses on a group of men, Eve represents a combination of real-life women who were key to espionage within the secret services in North Africa.

“There’s no getting away from it, this is a story mainly about men. Steve was clear and so were we, and the BBC recognised that it wasn’t something where you could pretend that wasn’t the case,” Haines says. “We leaned into it and celebrated it. But within that, Steve has drawn this brilliant character played by Sofia. It was important to have her as a counterpoint and for her to have a different kind of relationship with our lead character, Stirling. We were able then to tell a different side of his character and his story. We say this is a four-hander: it’s Stirling, it’s Paddy Mayne, it’s Jock Lewes and it’s Eve. She’s a significant element.”

Joining the project behind the camera is Tom Shankland (The Serpent), who directs all six episodes. “He has been unbelievable. He’s been like a member of the SAS,” Haines says. Also making up the crew was producer Stephen Smallwood, Shankland’s frequent collaborator whose task was to work out how the show would be made.

A lot of those plans were disrupted by the Covid-19 pandemic, however, with ambitions to shoot almost the entire series on location in Morocco put on hold. The production did eventually film about half the show there over approximately three months, after a two-month spell in the UK to capture all the interior scenes.

“That changed our plans in terms of what we were going to build and where we were going to relocate production. But with the production design and the costume design, we always felt that we didn’t want this to be a history lesson,” Haines says. “We wanted it absolutely to be authentic and to have historical integrity, but we also wanted it to have a contemporary feel to it.

“The way the guys are dressed, it feels as though it has a contemporary swagger to it as well as being historically accurate. They look a bit like a bunch of Hoxton hipsters – pirates in the desert – and we really love that. The vehicles were amazing; they were like steampunk vehicles – Land Rovers and light-armoured vehicles they had customised and adapted themselves. So for anyone who likes their vehicles, there’s a Mad Max element to it.”

The show’s budget gave it the chance to include some action set pieces in every episode, from the unit’s first parachute jump to some of their later raids. But before shooting even began, the cast were enrolled in a boot camp run by the SAS Regimental Association, a charitable organisation that represents the SAS and its affiliated units.

“That kind of set the tone, and I think they were all quite in awe and kind of nervous,” Haines says. “David Stirling and Paddy Mayne are the absolute royalty of the SAS. It doesn’t get any better, so the challenge of taking on those characters and bringing them to flesh was a significant honour and challenge for the guys. But at its heart it is an action show. Everybody had to get involved with lots of stunt work.”

Filming was further complicated by 45-degree temperatures and the threat of sandstorms on location in Morocco. Precautions were put in place to ensure everybody remained suitably hydrated, but nothing could prepare them for the “absolute havoc and chaos” a sudden storm could bring.

“It could be really quite frightening because suddenly you can’t see your hand in front of your face,” Haines says. “We were right out in some fairly remote spots, so we had to take some pretty extreme measures to keep everybody safe and get the work done. It was properly epic to film and a minor miracle that we actually managed to complete the production. But I’m glad we did.”

Before the series has even debuted, Knight and the SAS have already proven to be a tantalising combination, with US premium cablenet Epix picking up the show – which will be called Rogue Heroes overseas – in November last year. Distributor Banijay Rights has now also sold the drama to HBO Max in Europe, Prime Video in Canada and SBS in Australia.

“Everybody’s got their own version of an elite army group, but SAS: Rogue Heroes is about those characters and their stories. It’s not just a war drama,” Haines says. “You really engage with each of the guys, so it has a universal feel to it and it’s a lot of fun. It’s definitely not a boring history lesson. It has the swagger of Peaky but with these couldn’t-make-them-up, real-life characters doing insane stuff to change the course of the war in northern Africa.”

With the show’s conclusion coming midway through the Second World War, there is natural optimism that SAS: Rogue Heroes will return – and could continue the story far beyond the end of the conflict.

“That’s certainly the hope,” Haines adds. “We’ve always seen it as minimum of two seasons, but when we were talking to Steve, we saw this was a multi-season franchise. Steve’s already planned out in his head what season three and four would be. Hopefully we’ll get to do more.”