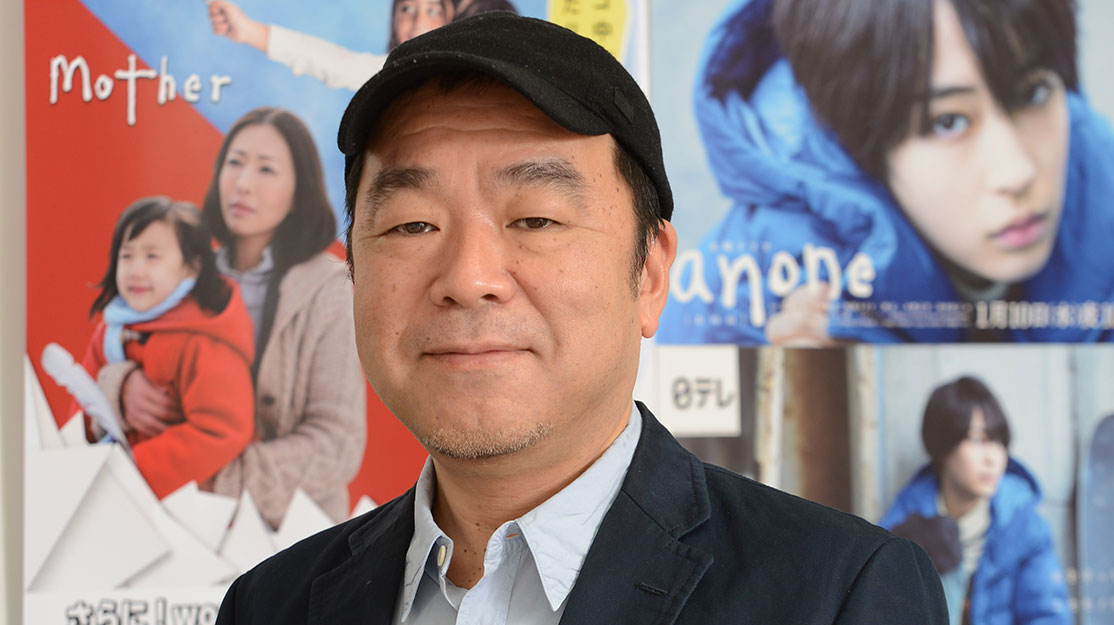 Japanese producer Hisashi Tsugiya has reunited with the writer behind Mother and Woman for Nippon TV’s latest drama series, Anone. He tells DQ about the show’s origins and how its fantasy elements set it apart from their previous collaborations.

As a leading producer at Japan’s Nippon TV, Hisashi Tsugiya (pictured above) is credited with making a new drama series every year since 2004 while working alongside some of the country’s leading directors, writers and actors.

Most notably, he has produced every drama for scriptwriter Yuji Sakamoto, alongside award-winning director Nobuo Mizuta. These include Mother, Woman – My Life for My Children and their latest collaboration, 10-part series Anone.

With Nippon TV celebrating its 65th anniversary this year, Tsugiya tells DQ more about Anone and offers his insights into the Japanese television drama industry.

How would you describe the story of Anone?
This is a story about the pseudo mother-daughter relationship between a lead character who was abandoned by her parents and grew up in an orphanage, and a widow who wanted to become a mother but was not able to. ‘Fake’ is the main theme of the drama, and one way we consider this concept is through the widow who used to run a print shop with her now-deceased husband. After her husband’s passing, she discovers a huge sum of fake paper currency underneath the floor of her print shop. So we juxtaposed their encounter with the discovery of the fake cash to shed light on how human life is not about money. This is a story about finding what is truly important in life.

What is the origin of the story?
Anone is written by Yuji Sakamoto, who is also the screenwriter of Mother and Woman – My Life for My Children. After Mother, Sakamoto and I discussed a story about fake money. There’s a tendency to imagine a crime or suspense story when people hear ‘fake money,’ but Anone is not about that. It’s about how fake things are controlling humans. Sakamoto and I had many conversations about how we could use fake money to depict human nature, lifestyle and values instead of crime and suspense.

What does the title mean and how does it reflect the story?
Anone is a word similar to ‘and,’ ‘by the way,’ or ‘let me tell you something’ in English, and it implies there is something that will come immediately after.

Tell us about your partnership with writer Yuji Sakamoto and director Nobuo Mizuta. How do you all work together?
We don’t really sit and discuss what we are going to produce next. It’s more like having dinner together and talking about current affairs such as recent crimes, or things in the world that infuriate us. Suddenly we find ourselves saying that the topic we just discussed would be a good drama. That’s how we come up with ideas. Both Mother [about a woman who helps an abused girl] and Woman [which depicts a single mother’s struggle against poverty] were born out of Sakamoto’s anger towards society. There’s no way anybody can create a story on something they don’t feel genuinely about, and Sakamoto is someone who can pen a story only if it’s based on what he feels. It has to come from his emotions.

How would you describe the development process behind the show?
The first episode takes the longest to write, and then we have subsequent discussions about certain parts of the story to flesh out scenarios and situations. The process of creating the characters, from the lead to the supporting ones, also involves conversations. Then I entrust everything to Sakamoto for about one month and he develops the plot. His first draft is usually enormous. This is also the stage where we begin to visualise who to cast – the lead character, types of encounters and relationships we will need down the line, the necessary acting skills and the preferred physical appearances.
Mizuta has his own views and ideas of what he wants to do based on what he sees in the world, and it requires a tremendous amount of talent to take a story on paper and put it into visual form. But Mizuta is a cut above the rest and I always marvel at how brilliantly he handles everything. Mizuta respects Sakamoto’s scripts and has the skills to do them justice, so they continue to work together from one project to another.

Where was the series filmed and how do the locations fit into the story?
This drama’s theme is ‘fake,’ so we wanted the geographical aspect not to be realistic as well. Places like Tokyo or Yokohama are real and that’s why we didn’t use them. We looked instead for cities and rural locations that look familiar but left the exact location vague. The print shop is set deep in Kawasaki but the oceanfront, with all those concrete breakwaters, which in the drama is within walking distance, is actually in Fuji. The wind turbines are also far off in Kashima, but they too are within walking distance in the story. What you’ll always notice, though, throughout the drama are the blue skies and ocean.

How does Anone compare or contrast with Mother and Woman?
Fundamentally, Anone is similar to Mother and Woman in that they share the theme of family and what it is all about. The difference with Anone is that it has a slight fantasy element. In the first episode, the main character flashes back to a past memory that turns out to be fake. What happened was too painful, so her brain altered it into a fun memory, and in order to depict these scenes, we used fantasy elements. In episode four, it is revealed that Anone (the widow)’s baby had died before being born, but she believes she actually gave birth to a girl and still has conversations with her. Fantasy elements expand the artistic possibilities of dramas and this is something we couldn’t do with Mother and Woman, which is what makes Anone different.

How would you describe the state of Japanese television drama?
This is a difficult question. Television is rapidly diversifying but people’s demand to see dramas within that platform is declining. A while ago, there was one TV set in the house and people gathered around it to watch programmes together. Japan is finally seeing the growth of dramas streamed online and more people are watching on their smartphones whenever and wherever they want. This situation influences the stories we show but in this fast-changing environment, at times we just have to put content out there and see how the result will be. It can be quite challenging, but I believe Japan is at a turning point.

In what ways are Japanese dramas evolving amid the huge number of series being produced around the world?
Dramas don’t really change, in my opinion. Athletes, for example, can join the national championships, win and qualify for the Olympics, but as they go from one stage to the next, they don’t really change their playing style and training methods, right? Much in the same way, Japanese dramas don’t really change just because they want to go overseas. Otherwise, they wouldn’t be Japanese dramas. That’s why I don’t think they will be evolving that much.
Japanese dramas are being localised overseas, but I don’t think it’s because people are so interested in our country’s culture or want to enjoy our scenery. People the world over are beginning to feel as one. No matter which country you’re from, the way people think, how they feel, what touches them, what makes them sad, are all the same. Dramas that depict how people’s emotions are universal have a better chance of succeeding globally.