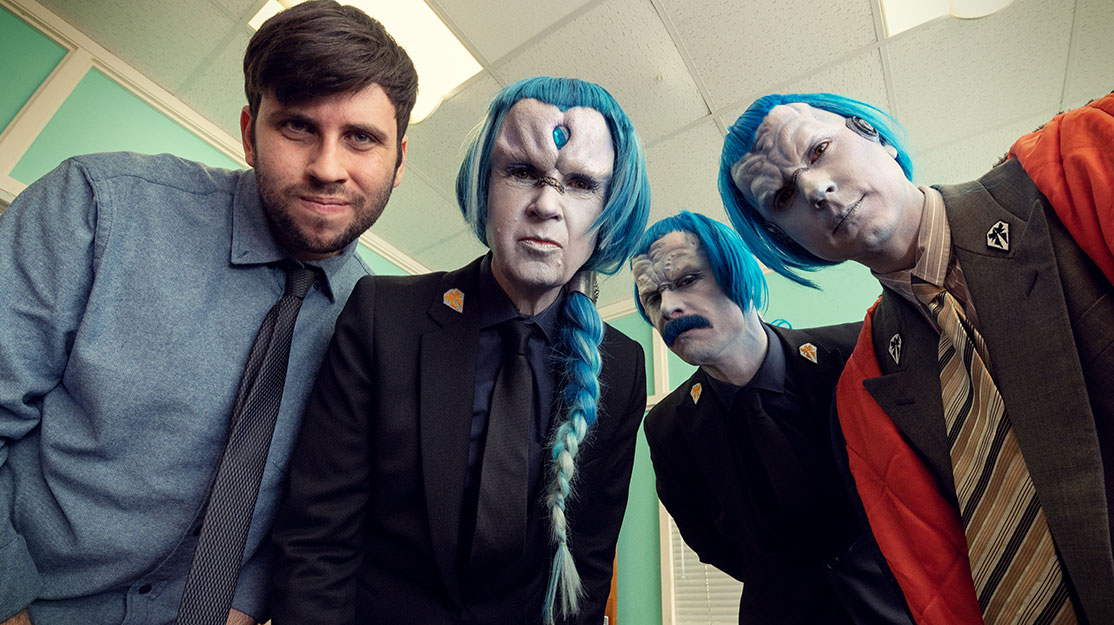 The cast and creative team behind UKTV comedy We Are Not Alone tell DQ why this feature-length comedy focuses less on Earth’s alien visitors than humankind’s own stupidity.

Joe Thomas has had some bizarre on-screen looks in his time. Who can forget the infamous school fashion show scene in The Inbetweeners where his character Simon displayed much more of his body than he was intending to as he strutted up and down the catwalk?

But surely the actor has never looked as strange as he does today. At a studio in Clerkenwell, London, Thomas is between scenes from his new comedy drama, We Are Not Alone. Plonked on the green-room sofa, he’s sporting shocking electric blue hair, a whitewashed face, an enlarged, ridged forehead that would not look out of place on a Klingon and a diamond planted pride of place in the centre of his brow. He looks literally out of this world – which is just as well, as he is playing an alien.

The actor laughs that the prosthetic make-up is so comfortable that he frequently forgets he’s wearing it. “We often forget it’s on and everything becomes like a scene from [Ricky Gervais comedy] Extras. You’re checking your phone, and you’re saying, ‘You must use my financial advisor. Yeah, he’s really good actually. I’ll give you his number.’

“Then you remember you’re dressed as an alien. You’re constantly having those moments. So all human small talk becomes completely ridiculous.”

In UKTV network Dave’s new feature-length comedy drama, which is written by Laurence Rickard and Ben Willbond (Ghosts, Horrible Histories), Thomas takes the role of an incompetent alien named Greggs (named after the bakery he sees after first landing). Alongside Trater (Vicki Pepperdine from Getting On) and Gordan (Man Down’s Mike Wozniak), Greggs is one of the Gu’un, a superior race who are mystified by the magnitude of the human idiocy they encounter when they invade Earth.

Dave describes the comedy, which is made by Big Talk Productions, as a “culture clash between humankind and its new masters, who are trying to make sense of a planet so confusing and idiotic that its inhabitants can’t even agree which side of the road to drive on.”

At one point, Gordan is totally stumped by how asinine we are. “You’re all terrified of death,” he snorts, “and yet your favourite mode of transport literally pumps out poison.”
Later, when Trater hears how we make Stilton, she is incredulous: “What is wrong with them?”

Willbond outlines why the theme of human fatuity takes centre stage in We Are Not Alone. “It was always at the forefront of our minds that it wasn’t going to be a sci-fi comedy about the aliens and how funny they are. It’s about how stupid we are,” he says. “After the last few years, and particularly with the climate crisis, it was increasingly a case of, ‘No, we have to do it about human stupidity and the way we behave, because it is so baffling.’”

The writer continues: “Can you imagine an advanced race going, ‘Sorry, just why do you keep using carbon as fuel? Because you do know what it does, don’t you?’ ‘We do, we do, but it’s complicated.’ ‘No, it’s not. Just stop doing it.’”

Rickard, who, with Willbond, also plays a clueless alien security guard, thinks the idea of an alien invasion chimes with the often-unbelievable times in which we live. “It just felt like over the last 10 years, everything you would think is hugely unlikely has actually happened, right the way from Trump becoming president to the overturning of Roe v Wade [the 1973 legal trial that established the right to abortion in the US]. “So we thought, ‘You know what? If aliens landed tomorrow, I think a lot of people would just go, ‘Yeah. And?’”

The tone of the We Are Not Alone, which launches on Dave on November 28, is very British. It plays on the underwhelming nature of the alien invasion. “It’s got that kind of British sensibility of being slightly banal and bathetic all the time,” says Thomas.

“If aliens actually came, it would just be a bit of a hassle. ‘I guess we should do what they say, but is that shop still doing the baguettes?’ There’s a scene really early on where Stewart goes into a pub in a bombed-out street. He asks, ‘Are you open?’ and they reply, ‘Yes, of course we are.’

“If there were an alien invasion, what would we actually do? We’d just be a bit bored with it. We’d be asking, ‘Can we have some other stories as well?’ It wouldn’t be like the Independence Day-style reckoning that we think it would be. We wouldn’t be able to get our act together. Actually, in those circumstances, people do the bare minimum. They try to adjust, but mainly they just shirk their duties.”

From The War of the Worlds to the aforementioned Independence Day, alien invasion stories have always been enormously popular. Fergal Costello, the director of We Are Not Alone, assesses why they strike such a chord: “It’s a good mechanism to look at ourselves and to see our behaviour through visitors who have no familiarity with how we operate.

“There’s a lot of satire in sci-fi, whether it’s serious or not. Philip K Dick’s novels, for instance, are reflective of how we feel about society. Even if you go back as far as [War of the Worlds author] HG Wells, it’s all metaphor. Science fiction is always a metaphor for now, for how people do things, and I think that’s what keeps drawing people back to the genre.”

We Are Not Alone also has the benefit of being highly topical. Some viewers, for instance, might see parallels between the power-crazed politician Grieves and a certain former US president.

“It’s mad how much timelier it’s becoming almost week to week, and how much more resonance it’s taking on,” says Costello, who won a Bafta in 2020 for his short film Brain in Gear. “We’re seeing so many parallels with reality. Amanda’s character is this slightly unhinged, slightly power-mad, recently deposed leader suddenly trying to get everything back again. You’re thinking, ‘Oh, my God, this is becoming nearly not science fiction anymore.’”

It is also true that in these troubled times, a laugh-out-loud comedy drama such as We Are Not Alone – distributed by BBC Studios – offers us a crucial sense of escapism.

“People love escapism,” observes Foote, “and they love any drama that’s not of this world. Look at the popularity of Game of Thrones. Also, everyone loves comedy. It’s the best form of escapism. If you’re laughing, you’re not thinking about anything else.”

Before Thomas returns to Greggs’ further cack-handed attempts at world domination, the actor considers what people might take away from We Are Not Alone. “First and foremost, it’s a brilliant comedy,” he asserts. “But it’s also got a lovely message about how we are doing terrible damage to, as far as we know, the only inhabitable planet that has ever existed or will ever exist.

“If aliens came to Earth, they’d be asking, ‘What the hell are you doing?’”