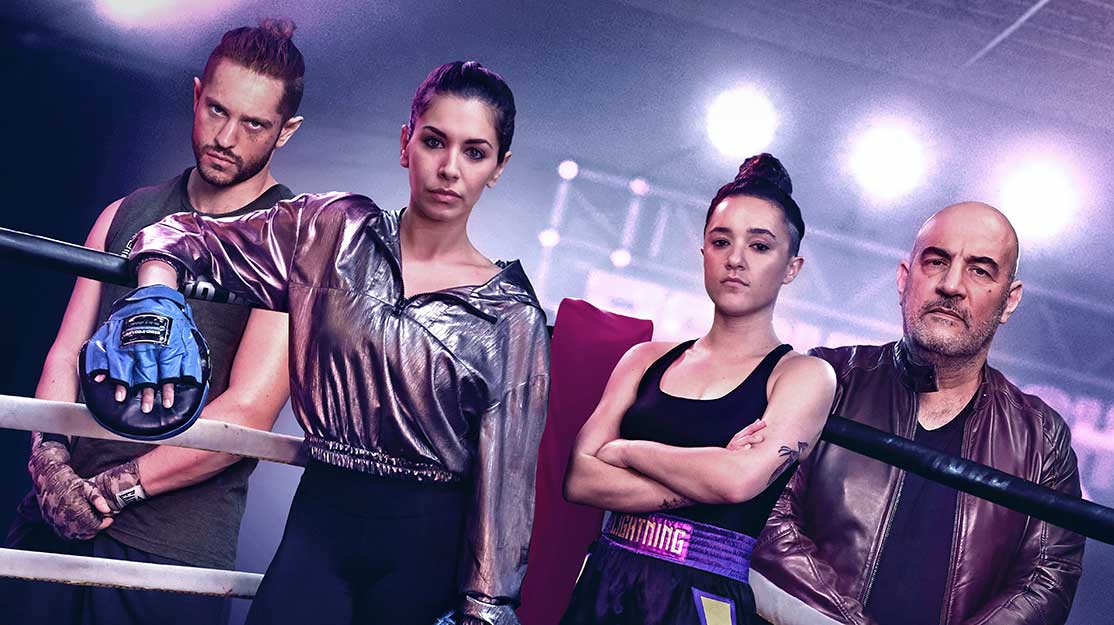 Australian miniseries On the Ropes packs a punch with its story of a female boxing trainer striving for equality and a chance to succeed in the sport she loves. DQ speaks to stars Nicole Chamoun and Keisha Castle-Hughes plus producer Courtney Wise about the SBS show.

Preparing for an audition might typically involve researching the series, learning some scenes and, if possible, reading the entire script. But for her latest role, Nicole Chamoun didn’t just want to speak the part, she wanted to look the part too.

This didn’t simply mean a change of outfit, however, as Chamoun was putting herself forward to play an aspiring boxing trainer in Australian network SBS’s four-part miniseries On the Ropes.

“I wanted it so much and I just wanted to do as much as I could to embody the character prior to the audition. So about a month before, I started training maybe once or twice a week,” she explains.

Her audition and her commitment impressed the show’s producers and she won the role. “Then once I was cast, I was doing boxing and weight training five days a week,” she continues. “And because I play a trainer, it was a whole other skill set to train and do pad work, learn the technique and the language, as well as learning how to throw a punch and to feel what it’s like to be hit. It was a lot but it’s awesome.”

On the Ropes — described as a “sexy, gritty drama that is fast-paced and full of heart” — stars Chamoun as Amirah Al-Amir, a wannabe trainer who has idolised her world-champion father Sami (Igal Naor) her entire life.

Working in the family gym in Sydney’s western suburbs alongside her two brothers, she negotiates a professional debut match for her hardnosed fighter Jess O’Connor (Keisha Castle-Hughes) with Sami’s long-time promoter Strick (Jack Thompson). But when her furious father threatens to cut her off, Amirah must choose whether to chase her dream or choose her family.

Chamoun says the eight-week production — two weeks of prep and six of filming — was a “really special experience” and she fell in love with the sport.

“Boxing was all new to me,” she admits. “It was my first time experiencing a character from the physicality aspect of it, which was really interesting. The physical stuff of the boxing world was so important to who she was as a person and it coloured so much of her identity that we did a lot of the character work simply by turning up to boxing training. So that was cool, and watching my body transform and seeing myself get stronger and picking up a new skill set, it was great. I loved it.”

Producer Courtney Wise says she was sold on Chamoun from her first audition, impressed that she had nailed the character of Amirah. “But when we realised she’d gotten into boxing, that was a bonus that we discovered later. Seeing all these Instagram pictures of her boxing was exciting but we didn’t know that straightaway.”

Amirah grows to love boxing after being brought up in that world, but finds it’s only when she wants to step out on her own that she is confronted by opposition, most notably from her father.

“I think if Amirah were born a boy, it would have been a different situation,” says Wise. “She’s really talented in terms of boxing and would have been a natural heir but, because she’s not a boy, it’s that much harder for her. Sami’s responsible for nurturing her in this world but when it comes to making it her career, that’s where it becomes not for him because he does have that deeply entrenched, patriarchal view of the sport.

“When she decides to go pro, that’s when he and his wife start to panic and draw those lines in the sand. She knew he wouldn’t approve, but not how much it would tear the whole family apart.”

Chamoun says Amirah challenges traditional representations of men and women, in a story that tackles themes of gender inequality, multi-generational conflicts and the difficulties facing immigrant families. “The only reason she can challenge her family the way she does is because she knows they love her unconditionally. It’s not like he’s the big bad father who doesn’t respect women’s place in the world. She’s questioning all the things he’s grown up to know and believe in the boxing world and in the community. That’s where it’s coming from. He’s protecting her.

“But she’s a strong-ass woman. She knows what she wants and has the courage to fight for it. And they could be from any background – this story just happens to have an Iraqi-Australian family.”

Like Chamoun, Castle-Hughes (Game of Thrones, Whale Rider) went through a demanding regime to play boxer Jess, training for up to five hours a day for eight weeks before shooting began. “In boxing, you don’t have anywhere to hide. There’s nowhere to go,” the Oscar-nominated actor says. “You can build your strength up and get as strong as you can, but it really comes down to mental endurance.”

Castle-Hughes admits she often felt “broken” on set, such was the demanding nature of the role and the fight sequences she had to perform. Body doubles were used, but the actors did the vast majority of the physical work themselves. “But I felt really supported,” she says. “Nicole and I had such a special relationship — it was very easy for us to be the trainer and the fighter.

“Jess and Amirah are closer than anyone else, especially when training. There’s a level of deep respect that was required. You see their relationship and they learn so much from each other.”

The idea for On the Ropes came from Wise, a self-proclaimed boxing fan, who wanted to set a drama in the world of sport. She devised the characters and the story before writing a series outline, bringing in writers including Tamara Asmar (Doctor Doctor), Adam Todd (Wentworth) and Ian Meadows (House Husbands).

Boxers such as Australian pro Bianca Elmir were also on hand to bring authenticity to the series, with Elmir also helping with the fight choreography. The series isn’t filled with boxing sequences, however, as Wise was keen to ensure viewers didn’t suffer from “fight fatigue.” When such scenes do appear, though, she says they are narratively driven and reflect the emotional relationships of the characters.

Barring a car-park brawl, Chamoun was largely on the sidelines for the fight sequences, as the trainer watching from behind the ropes, but she did climb into the ring for sparring scenes with Castle-Hughes and fellow actor Louis Hunter.

“Both Keisha and Louis worked so hard and it was so incredible. I have so much admiration for them,” Chamoun says. “I don’t even know how they did that as well as the acting and the character work on top of it. Also, I’m very clumsy so I feel like it wouldn’t have been good for anyone if I were in the ring. It’s best to have me on the sidelines — using my voice is my strength.”

Behind the camera is Shannon Murphy (Offspring), who directed all four episodes of the miniseries, produced for SBS by Lingo Pictures and distributed worldwide by DCD Rights. Wise says Murphy succeeded in getting grounded, authentic performances and a unique visual style that matches the unfamiliar setting for the story.

“When I took Shannon to one of her first fight nights, she instantly fell in love with it and then took all those visual elements and pushed it to a whole new level,” Wise explains. “She did that across the series and, when you look at it, it’s very visually distinct and that’s all credit to her embracing that and really giving it a push.”

Chamoun says the series pays respect to boxing, with many from the sport playing a part in the development and production of the drama. “I feel like that world’s going to be surprised about how authentically we have delivered it,” she says. “I’m just really honoured to have been part of a project where we’re putting on screen Arab-Australian characters that are not the victims or the terrorists. I hope there are women who see themselves in me being represented on screen.”

Having appeared recently in both Romper Stomper and Safe Harbour, the actor says she has enjoyed some “really beautiful, heartfelt, juicy roles and stories,” with On the Ropes following that same vein. It is due to air later this year.

“I just want to play bold, strong, powerful women,” she adds. “I feel like I’ve only had the opportunity to play Arab women so far, so I do think it’s important that we challenge that part of things. It would be nice to play some roles that are not based on my ethnic background, but then again it’s all about the story and the character. And if they’re strong women with something to say, I hope I have an opportunity to play them.”