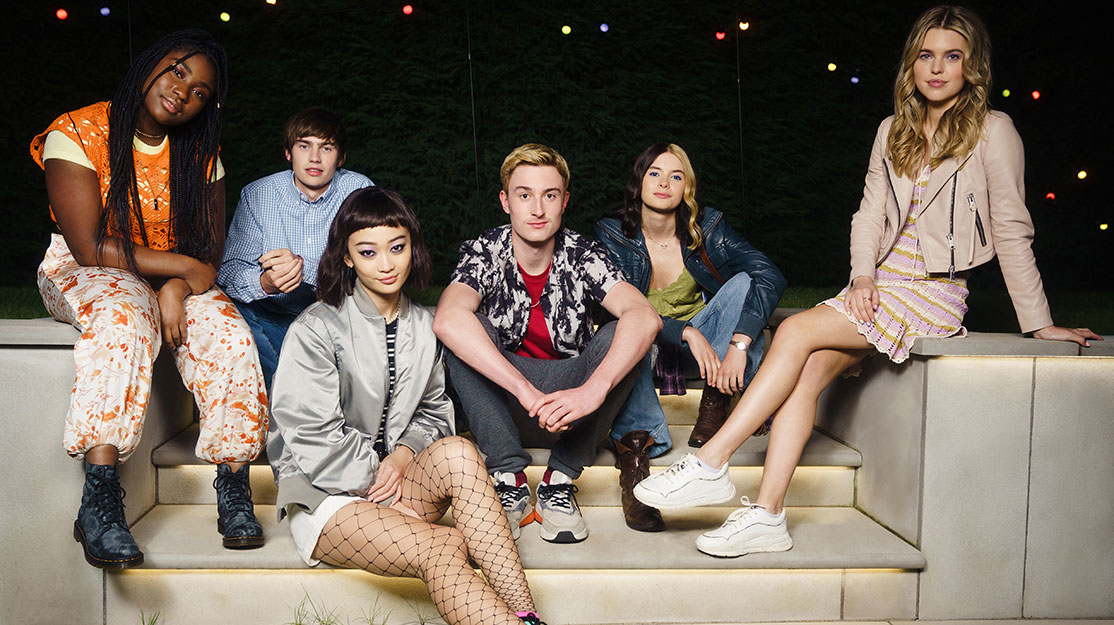 Tell Me Everything star Callina Liang tells DQ everything about making her screen debut in this ITVX coming-of-age drama, how it puts teenage mental health in the spotlight and how she learned to cry.

In a story about the struggles facing a group of teenagers, where emotions are never far from the surface, one character in ITVX series Tell Me Everything is more difficult to read.

Yet like the group of friends she seeks out, Mei has secrets and vulnerabilities that threaten to emerge over the course of the six-part story.

When the series begins, 16-year-old Jonny Murphy (Eden H Davies) appears to be the life and soul of the party, but a family tragedy sends him spiralling into depression and anxiety. As he hides his feelings from his friends – Neve (Lauren Ajufo), Louis (Spike Fearn), Zia (Carla Woodcock) and Regan (Tessa Lucille) – Jonny’s struggle takes him to ever darker places that threaten to overwhelm him.

Relief appears in the form of the mysterious Mei (Callina Liang), who arrives from Canada with a rebellious new identity she uses to mask her own problems. She quickly latches on to Jonny, and her influence leads them to increasingly extreme behaviour. But while Jonny finds a kindred spirit in Mei, his friends don’t trust her – and revelations leave them both spinning out of control.

Produced by Noho Film & Television and distributed by ITV Studios, Tell Me Everything marks the screen debut for Liang, who describes starring in creator Mark O’Sullivan (Lee & Dean, The Agency)’s first drama as “a dream.”

“I could not have been happier for my first screen role to be Mei and for it to be Tell Me Everything,” she tells DQ. “The project itself was something I was really passionate about as well, because it deals with teenagers growing up in the 2020s. It’s uniquely British. It’s very raw, very grounded. I really like the story, and it deals with a lot of dark moments and light moments, and every single character has their own struggles. I feel like everyone watching will have something to relate to.”

Liang was born in Vancouver, Canada, but grew up in China before attending drama school in Singapore, New York and Toronto. Now based in London, her acting career had largely been on the stage until the opportunity to audition for Tell Me Everything arrived.

The first scripts she read didn’t give away too much about Mei’s character. “I remember thinking, ‘This girl is so weird,’” Liang says. “Obviously the writing has changed from what I auditioned with to when we were filming, but she has this very dark energy and is quite manipulative. She will do whatever it takes to get what she wants. She has quite an odd view of the world.”

Mei grew up in Welwyn Garden City – O’Sullivan’s home town and the setting for the series – before moving to Canada with her parents and then returning to the UK when her parents split. The character’s world view was “definitely not completely alien to me,” says Liang, who was also able to perform using her natural Canadian accent after initially auditioning with a British accent. Her voice certainly helps Mei cement her outsider image at the start of the series.

The first episode sees Mei strike up a relationship with Jonny, who is acting out after a death in his family turns his world upside down. Sharing in his vulnerability after moving back to Welwyn, Mei is “alone and she wants someone to latch on to. She wants someone in her control,” Liang says about her character. “She sees Jonny and this group of friends and she’s like, ‘I want him. I want to be a part of this, and I will do whatever it takes.’

Like many of the young characters in Tell Me Everything, Mei “is just very lost in this world. She’s trying to find herself,” Liang adds. “She just wants to find support, but she doesn’t know how to do it in necessarily the right way. Because she’s going about it perhaps quite destructively or spontaneously, these relationships that she’s longing for maybe aren’t coming to her as she’s hoping. That’s the more vulnerable side of her that people don’t really initially see. She’s definitely struggling.”

Though the actor was initially worried that Mei was nothing like her, Liang came to find some common ground with her character. Having spent time at boarding school and having moved around a lot while growing up, she is used to finding new friends and places to call home – a task made more difficult today by social media.

“Teenagers growing up think their lives should be a certain way. They have these false expectations, and I think that’s very toxic,” Liang says. “I struggled with that a little bit growing up as well, but luckily when I was growing up, Instagram and all of that was just starting out.

“What the show tackles really well is you see Johnny and what he posts on social media and then how you are left alone with your emotions. That’s just how it is. Another issue the show tackles really well is mental health, and it talks about that in a very raw and realistic way. I just think that for teenagers growing up now, in the 2020s, it is just a very different time, a very different world.”

Tell Me Everything is provocative and funny from the outset. A standout scene in the first episode finds Jonny seemingly about to step off a ledge at the top of a church tower when Mei arrives and talks him back from the edge, striking up a friendship before an accident almost leads to tragedy.

“What a complicated scene,” Liang remarks. “I remember first reading it and I was like, ‘Right, Mark, what is going on? But basically, she can tell he’s not OK and that he hasn’t told anyone how he really feels. She’s trying to have that bond and she’s trying to show like, ‘We’re both messed up, and as long as you’ve got me and I’ve got you, we’re going to be OK.’”

Television magic was used to film the scene, with a large scale mock-up of the church tower built in a studio and cameras positioned to record from two angles – one where Liang had to freefall onto crash mats below and another where she was supported by a harness.

It’s one action scene that stands apart from the numerous emotional, “intense, dark” moments Liang had to deal with when making the show. But while Mei uses her make-up as a kind of armour against everyday life, Liang was able to escape her character by taking off her wig and costume at the end of each shooting day. Music, and particularly songs by Billie Eilish, also helped her get into character.

“Most of the time, it took a bit to get into her mindset,” she says. “It felt like when I put on the wig and got into the costume, because it’s so far from what I wear personally, I slipped into her character. After getting my make-up done, I would look at myself in the mirror and no longer see myself. I just saw the world [as her] and went about the day as Mei.”

Liang’s preparation was also aided by intimacy workshops with the rest of the cast ahead of shooting, while there were rehearsals for any scenes involving stunts, a lot of movement or intimate moments. “We had proper rehearsals for those scenes, and then everything else was rehearsed before going for a take,” she says. “But it was always fun. We all got along as actors and it was very collaborative.”

Reflecting on her first TV role, Liang says one of the main things she has learned is how to to stir up emotions quickly. “Sometimes you do a scene of talking, talking, talking until you’re about to cry and then, ‘Cut!’ I’ll have a coffee, have a sausage roll. They set up the camera and then it’s like, ‘OK, now we’re ready for the moment where you start bawling your eyes out.’ I definitely learned how to get into emotions quickly and efficiently and still make it very real and grounded.”

Meanwhile, Liang promises that viewers will see a lighter and softer side to Mei as the series progresses, despite the struggles she faces with her family and friends. “She’s going to find herself,” the actor says. “I hope that’s something people will see and relate to and feel like they’re not the only ones feeling lost. I definitely saw a lot of myself growing up in her when I was filming. In the beginning. I was like, we’re very different. But the more I read of her, the whole season, looking at what she went through, it resonated a lot. she’s a strong-ass 16-year-old girl.

While any British teen drama inevitably finds itself being compared with Skins, the seminal Channel 4 comedy-drama that wasn’t afraid of tackling controversial subjects, Tell Me Everything promises to put a modern lens on teenage life.

“This is something new because it tackles the issues of growing up in the 2020s with social media,” Liang notes. “The issues are very current. Compared with other teen shows, it is also uniquely British. It’s set in Welwyn Garden City and, coming from Canada, I had no idea where that even was. So you get to see this town in England, you get to see these working-class teenagers. Nothing is glamorised. You get to see teenagers struggling with real life.”