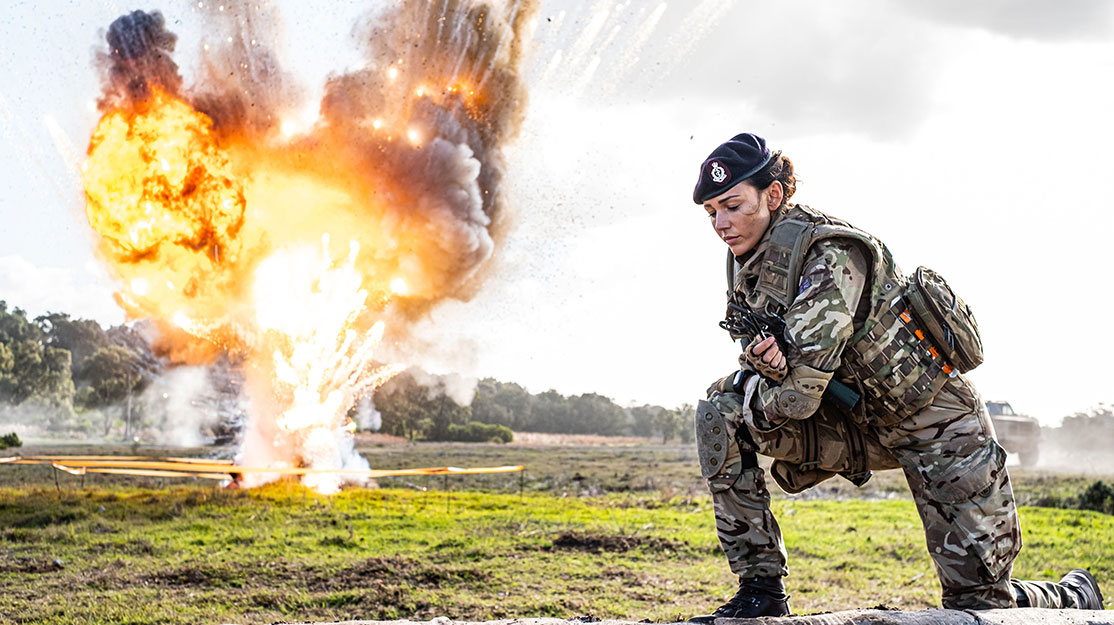 Having started life as a one-off drama, Our Girl is now in its fourth full season. Creator Tony Grounds tells DQ about making the military series, being inspired by real-life stories and replacing star Michelle Keegan.

At a time when television production has largely shut down, the fourth season of BBC army drama Our Girl was delivered with military precision to ensure viewers wouldn’t face any delays catching up with Georgie Lane and the members of 2 Section.

In fact, creator and writer Tony Grounds is already looking towards a potential fifth season, as he spends time in his London flat during the ongoing Coronavirus-enforced lockdown.

“Will it really be over in three months? If it is, that’s great, and then we can probably all pick up again,” he says of the television industry. “But if it drags on, I don’t know how anybody will be able to go into production, because we have up to 400 people [on set] some days. You have a lot of physical contact.”

The duration of the pandemic will also go a long way to determining how television writers address the global health crisis in their writing, Grounds says, with the potential ‘coronavirus effect’ ranging from characters discussing it nostalgically in a pub to whole storylines covering the issue.

Season four of Our Girl sees combat medic Georgie, played by Michelle Keegan, start a new stage of her career, having been promoted to sergeant and now training a new bunch of medics. Insistent to her friends in 2 Section that she’s happily settled in her new job and will not be joining them on their upcoming deployment to Afghanistan, Georgie has a night on the town that results in a near-fatal incident and the realisation that losing the love of her life in a Taliban attack is the real reason she doesn’t want to go back. She then determines that she must return to face her fears.

Produced by BBC Studios, Our Girl is a unique proposition in the television schedules, having originally launched in 2013 as a single film that told the story of disillusioned 18-year-old Molly Dawes, who decides to join the army. A full season then aired in 2014, with EastEnders star Lacey Turner continuing in the lead role as Molly completed her training as a combat medical technician and found herself deployed to Afghanistan with her all-male colleagues in 2 Section.

Season two saw Keegan take the lead, with Georgie sent on a humanitarian tour of Kenya, while season three followed the character as she was sent to Nepal after an earthquake.

“It’s been a fantastic journey,” says Grounds, whose writing credits also include The Bill, EastEnders, Ray Winstone starrer Our Boy and Bodily Harm. “It’s unexpected in the sense that the single film was just a single film, but it seemed to do so well. Ben Stephenson, who was head of drama of the BBC at that point, asked me if it could go to a series. Because we’re following the combat medical technicians around, it can be as long as you want because, as long as we’ve got a British army, there will be stories.”

Grounds recalls that, with Turner contracted to return to EastEnders at the end of the first season, he expected the show would come to an end. “Then Ben said, ‘What about Michelle Keegan?’ At the time, I didn’t know who she was. He pulled that rabbit out of the hat and I met with Michelle, we chatted about it and she was great.

“We didn’t set it up to be a long-running show. It’s funny, sometimes shows that set out to run forever never do. They fade at the end of their first season, whereas this wasn’t intended to be that at all and we’re still going. I do think we’re getting better and better. We’re finding out what the show is.”

Key to the series is its focus not on the army itself but the individual characters who must come together and work in often hostile and emotionally challenging environments. “We put the microscope on the squaddies,” Grounds notes.

In fact, Grounds devised the series after first meeting a batch of trainee female combat medics when he visited a British army base with a military friend back in 2011.

“I didn’t know girls were in the army. At that time, we didn’t have women in the infantry. Now everything’s equal,” he explains. “These girls were 17 with guns and they were in their final bit of training before going to Afghanistan with the Royal Engineers. It was fantastic [meeting them] so I said, ‘Brilliant, I’m going to write a single [drama] about phase-one training.’ That’s what I pitched and what I wrote.”

During its run, Our Girl has featured a mixture of single and two-part stories within seasons, each one contemporary and based on real events, following combat medics in their work around the world. Grounds has written all but a handful of episodes, a process that begins after sitting down with the exec producer for that season to map out where the story will head.

“I pretty much do them all, because when we’re out filming in South Africa, it’s easier because I’m there and can change stuff. It’s less complicated and I can write stuff on the hoof with the actors as well,” he says.

“In some instances, we have to be fairly fluid, because we’re working with 100 extras and you have to be quick on your feet, because sometimes you’re handing bits of script over [on set]. We have military advisors as well to then go, ‘Oh, no, that would never happen.’ It’s not a documentary, but we want to make it as realistic as we can. And on this last one, we had military help before we left [the UK] and on set.”

At first, British heads of department would fly out to run the project with Grounds. But over the years, the series has become entirely populated by local crew. “We take trainees from the townships, everything, so we’ve got a big and fantastic machine going out there,” he explains. “I’ve got a lot of commitment to that, to what we’re doing there, which I think is right. It’s enjoyable to do, and I’m loving the commitment from all the team, actors and crew.”

The launch of this latest season last month, however, was overshadowed by news earlier in the year that Keegan would not be returning to the series should it be renewed for a fifth run, leaving Grounds to find a third lead character.

“She wanted a break,” he says of former Coronation Street actor Keegan, who has now completed three tours of duty with Our Girl. “We’re away for so much of the year filming – predominantly in South Africa, but we’ve also done Malaysia and Nepal and various places abroad. Mark [Wright, Keegan’s reality star/TV presenter husband] was coming back from LA and they planned to spend some time together and do something in the UK. I thought she’d left and then she said [at a press screening], ‘I wouldn’t say forever.’

“So at the moment I’m making plans that she’s not in the next season. I’ll chat to her and, obviously, she can come back whenever she wants. She’s great for us and it’d be sad if she left. She obviously wants to keep that door open, which is great.”

Grounds is now working out what a potential fifth season may look like before turning his thoughts to who could take the lead in Keegan’s place. “I’m sure the BBC will have an opinion on who they’d like to play the part too. I keep reading articles in the paper saying I’m in the final stages of meeting people, but it’s not true because I’ve literally not met anyone,” he says. “We’re flicking through ideas and I’m sure the casting people are ringing up agents to check on availability and stuff like that.”

Whether the show returns is yet to be decided, but running Our Girl for four seasons is still a proud achievement for Grounds. He’s particularly pleased the drama has drawn an audience that doesn’t often tune into BBC1 at 21.00.

“We reach an audience other BBC shows don’t reach,” he says. “We have a drama that skews quite young and yet we’re looking at Afghanistan, Kenya, Somalia, Nigeria, Nepal and the jungles in South America. We’re doing something no other dramas do. We’re literally, hopefully, showing a different aspect of the world. We’re entertaining and hopefully inspiring the people who are watching as well.

“From that first single film, with Molly Dawes, it was really about a girl who broke the expected narrative of her life,” Grounds adds. “Everybody thought she was a failure, she was rubbish, she couldn’t do anything. But she becomes a combat medical technician and actually proves she’s got a lot to offer the world.

“I don’t want anybody to join the army particularly, but I do want people to think, ‘I could do that.’ Whatever it is, she broke the expected narrative of her life and that seemed to inspire a lot of people.”