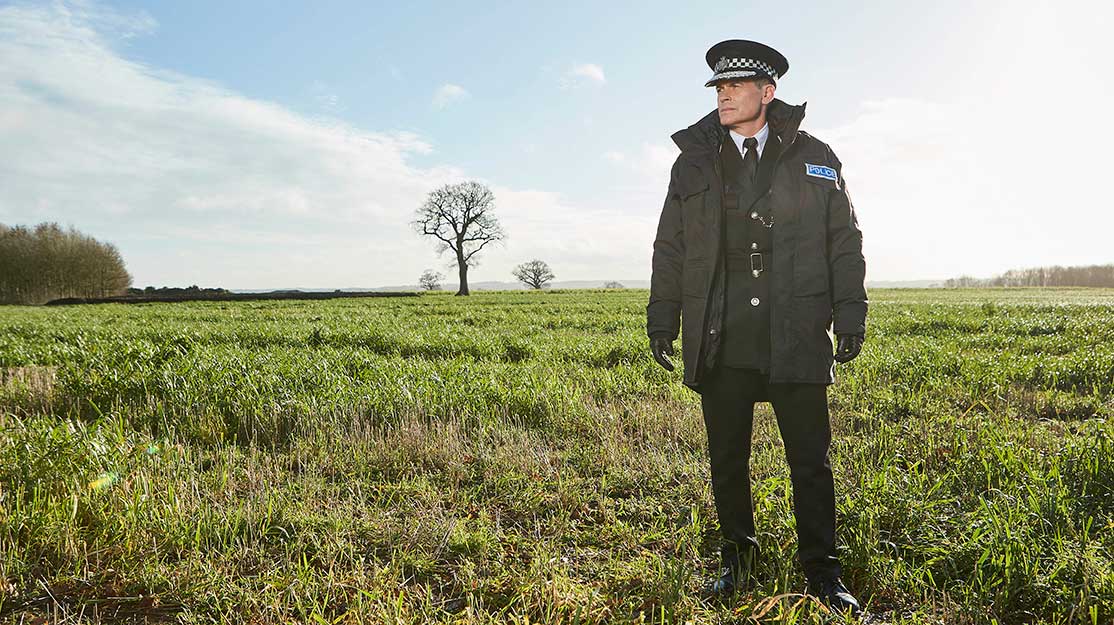 Rob Lowe, the US actor best known for turns in The West Wing and Parks & Recreation, discusses his move to the UK to lead the cast of crime drama Wild Bill, his role as an executive producer and his passion for directing.

Writers often have their ideal star in mind when putting the finishing touches to their latest screenplay. In many cases, this is simply a pipe dream – but when Wild Bill co-creators and scribes Jim Keeble and Dudi Appleton say they wrote the lead role specifically for US actor Rob Lowe, it was more than just fantasy.

“Wild Bill gives us a chance to write about modern Britain and modern crime through unique eyes,” they say. “We wrote this for Rob, for his smart-talking, anarchic, soulful voice. Displacing Rob in Britain and specifically in Boston, Lincolnshire allows us to tell stories that are left-field and unexpected. We wanted to write something that couldn’t take place anywhere else, or at any other time.”

It was fortuitous then that Lowe, best known for starring in Aaron Sorkin’s political classic The West Wing, was looking for a project set outside of the US.

“I just needed a break from network television,” admits Lowe, speaking to DQ at the Monte Carlo Television Festival. “I’ve had a show on the schedule every year since 1999. I’m really proud of that. I don’t know if any other actor has ever done that. But I wanted to do [the type of] storytelling you just can’t do on a traditional American network. The pace is different, the stories are different, how it’s shot is different. I wanted a geographical change and, as I was looking for that, Wild Bill came to me. The character was undeniable.”

The ITV drama, produced by 42, MultiStory Media and Anonymous Content, sees Lowe play high-flying US cop Bill Hixon, who is parachuted into the UK as the new chief constable of the East Lincolnshire Police Force, with a targeted brief to tackle rising crime figures while making budget cuts.

Initially derided by his new colleagues as a clueless fish-out-of-water, he comes armed with a range of statistics and algorithms he hopes will help him finish the job and return to the US as quickly as possible. However, he soon finds the locals are just as smart-mouthed and cynical as they are back home, while a return to frontline policing makes him question whether Boston needs him or he needs Boston.

Executive producer Rory Aitken describes the series as “Happy Valley with a touch of Fargo,” while the Lincolnshire countryside provides a refreshing alternative to the cityscapes more commonly associated with crime dramas. It is distributed by ITV Studios Global Entertainment.

Lowe is quick to agree that there’s also a touch of Moneyball about the series, a reference to the book of the same name about the Oakland Athletics baseball team’s attempt to build a competitive team using analytics and statistics. Michael Lewis’ non-fiction work was later turned into a 2011 film starring Brad Pitt.

“That’s exactly what I thought of when I read it,” he says. “Analytics have taken over the world, they really and truly have. They’ve changed everything and they really, truly have changed law enforcement. It makes perfect sense. You have X number of men or women on the force; run it through a computer and the computer will tell you where they need to be. It’s not up to their intuition. It actually makes more sense for law enforcement than it does for sports. But I’ve never really seen that [in television], so it was nice. It’s the perfect way to come into an old, traditional doing-it-the-same-way-for-decades-and-decades story, and then throwing a character in like Bill is a brilliant, original concept.”

Lowe heads a cast that also includes Bronwyn James as DC Yeardsley, an eager detective who proves to be an early ally for Bill; Tony Pitts, whose chief commissioner Keith Metcalfe has hidden reasons for bringing Bill from the US; and Aloreia Spencer, who as Bill’s 14-year-old daughter Kelsey shares his grief at the sudden loss of his wife and her mother.

Lowe’s role on Wild Bill isn’t confined to the screen, however, as he also takes up an executive producer position behind the scenes alongside Aitken, Eleanor Moran and Tim Carter. He says he was on board the project a year-and-a-half before filming began, offering notes during the scriptwriting stage and becoming an integral part of the casting process.

“The EP job as an actor/star is different on different shows,” he says. “When I go from this to work with Ryan Murphy on 911: Lone Star, my job there will be, ‘Good idea, Ryan!’ That’s my job. Here, it’s more of an unknown for me. I didn’t know a lot of the players involved, so it’s kind of like a quality-control position where I step in when needed. I’ll give notes on scripts. Jim and Dudi are English, so their notion of how an American speaks sometimes needed some help to make sense, so I’m there to do that. But now the show is up and running, if we were ever to do a second season of it, I kind of feel like my work is done.”

It’s his experience across a screen career spanning four decades that means at this stage, Lowe feels he has to be involved beyond just saying his lines. “You’ve got to,” he adds. “At this point, I’m usually by far the most experienced person involved in anything, anywhere, so you want to bring what you’ve learned to bear and bring what you can.”

Appearing in Wild Bill still offered Lowe a chance to find new experiences on set, not least in the more relaxed working conditions on a UK set compared to those in the US. “Oh my God, it’s so different,” he exclaims, recalling his time on CBS medical drama Code Black as an example.

“We would close down an eight-lane freeway, have a fiery tanker inferno and a multi-car pile-up. Then there would be a helicopter rescue and back at the hospital there would be 700 extras and a blackout or 14 multiple storylines – and we’d shoot that in eight days. Wild Bill is me running around in a car in the countryside in 17 days. So there’s definitely not a sense of urgency making TV in Britain!”

On the set of Wild Bill, Lowe recalls the emotional demands of playing Bill in a cold and often wet location on the English east coast. “But that’s what I signed up for,” he says stoically. “That’s what you want. Why go to Boston, Lincolnshire if you don’t want that? So every day where I was cold and wet and lonely, I was like, ‘Yeah, but it’s all going to be on screen.’ What you don’t want to be is cold, wet and miserable and have none of that on screen. That’s a nightmare. So I knew what it was.”

Beyond its Hollywood star lead and unfamiliar setting, Wild Bill is also notable for its shift in tone away from the fast-paced nature of many other crime dramas. It is filled with human drama and emotion, with episode one focusing on the effort to solve the murder of a woman who disappeared many years earlier, while fans of Lowe’s turn in off-beat comedy Parks & Recreation will be pleased to find the show also has touches of humour.

“I happen to be really down with the mash-up,” he says. “But here’s the thing that made me laugh too – the thing about the internet, Twitter and social media is the noisy five people can make it seem like everyone feels a certain way. I’ve seen people really upset about the lack of authentic accents in the show. As an American, I can’t tell the difference anyway! But I love that we’re watching Chernobyl and falling all over ourselves, even though it’s in Ukraine and everyone has a British accent, and nobody says one fucking word about it.”

For his next project, Lowe will return to US network television to lead Fox crime drama 911: Lone Star. The actor says that while much of the plot is still in the minds of creators and executive producers Ryan Murphy, Brad Falchuk and Tim Minear (American Horror Story), he does know he will play a fire chief with a grown-up son, living in Austin, Texas.

“He comes to deal with this firehouse that has had a tragedy and there’s a very specific reason why he’s there to deal with it,” he reveals. “Above and beyond that, honestly I don’t know! It airs after the NFC Championship Game [in January 2020], which is a big deal, and we start shooting right after Labor Day, so we’re literally in the process of writing.”

Beyond acting, Lowe has uncovered a passion for directing. After helming a short story two decades ago, his first experiencing directing a major project came last year in the shape of Lifetime movie The Bad Seed, in which he also starred. A remake of the 1956 thriller movie of the same name, it saw Lowe play a widowed father who, after helping his daughter cope with the tragic drowning of one of her classmates, begins to suspect she might have been involved.

“I love directing. It’s the most fulfilling thing I can do,” he says, adding that he prefers it to acting, performing his one-man show and writing books because “I get to use every club in my bag and I love it.”

The problem, he notes, is that he’s attracted to a very specific type of material. “It’s elevated genre pieces,” he continues. “I did The Bad Seed, which is a homage to The Shining, Rosemary’s Baby and The Exorcist. But it just took so much time and I literally don’t have the time.

“The other thing is, like everything else, to be a movie director today means something different than it did when I was a kid. There are very few Quentin Tarantinos [Pulp Fiction], Paul Thomas Andersons [There Will Be Blood], Steve McQueens [12 Years A Slave] or Damien Chazelles [La La Land]. Those are my heroes. But now it’s tough even for them. The notion of a writer/director/auteur, that’s not the era we’re living in right now. Those types of people are now the David Simons [The Wire], the David Milches [Deadwood] and the Aaron Sorkins. They’re all creating television, which is a whole other thing.”

To many viewers, however, Lowe will always be Sam Seaborn, the intelligent and charming White House deputy communications director in Sorkin’s The West Wing. In today’s divisive and polarised political climate, particularly in the US, it’s unsurprising that the series’ idealistic liberalism under Martin Sheen’s President Josiah Bartlet continues to be a touchstone for fans of the actor and the series alike.

Lowe agrees that the show is “more valuable than ever. I just know because of the people who come up to me all the time,” he says. “It used to be, ‘I love The West Wing’ or ‘I still love The West Wing.’ Now, honestly, it’s ‘My husband and I are working our way through the series for the fifth time.’ It’s unreal. It is more relevant – people are more into it today than they were when it was out. It’s crazy.”

If an often-mooted West Wing reunion or reboot ever comes to fruition, Lowe might yet find himself back in the White House. But whether he’s in front of or behind the camera, he’s set to remain a fixture in the television world for some time to come.