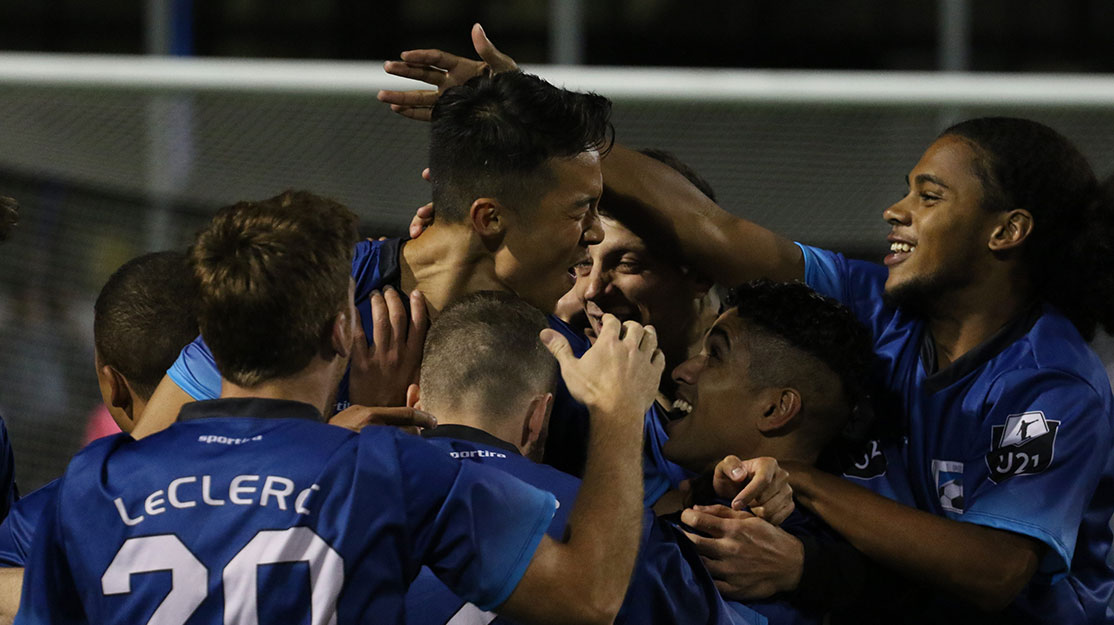 Getting the ball rolling

Canadian drama 21 Thunder charts the fortunes of the players and staff at a Montreal football team, both on and off the pitch. DQ chats to co-creator and writer Riley Adams about tackling a sports drama.

Sports dramas have had a chequered history on the small screen, from the success of acclaimed series Friday Night Lights and recent Netflix arrival GLOW to one-and-done entries including baseball series Pitch and horse racing-focused Luck.

Yet of all the sports to have been dramatised for a scripted series, it seems soccer, in particular, has had more ups and downs than an average penalty shootout. British series over the years have included Playing the Field, Dream Team and, perhaps with more attention paid off the pitch than on it, Footballers’ Wives.

Netflix recently entered the field with Mexican drama Club de Cuervos, about a brother and sister who battle high expectations and each other after they inherit a football club.

Now Canada has joined the fray with 21 Thunder, which follows the fortunes of the players and coaches of an under-21s soccer team, one step away from the pros.

The project, from PMA Productions and Generic Productions, was conceived more than three years ago when co-creator Riley Adams (Flashpoint, Crossing the Rubicon) was pitched the idea for the series by fellow executive producers Kenneth Hirsch and Adrian Wills. Broadcaster CBC was already on board.

“I loved the idea of that kind of sports show with a tougher edge and kids who hadn’t quite got there yet,” Adams says of the Montreal-set drama, which is distributed internationally by Content Media. “They could be the next Ronaldo, but what kind of pressure does that bring from agents, family members and coaches, and how do they deal with that when they’re still children in many ways?

“I also liked the idea of the whole world coming to Montreal, telling an outward-looking story. Maybe some sports dramas in the past have been insular, about smaller communities, which is fascinating in its own right, but I liked the idea of a show where you have kids from all over the world coming to one place and having to figure that place out and be in competition with each other. But they also have to come together as a family to survive in this place with all its temptations, dangers and pleasures.”

Working with Hirsch and Wills, Adams was brought in to help draw the characters and develop storylines that could be woven through the first season, with individual episodes also featuring segments of match action as the team progresses through their fixture list.

For one story, Adams took inspiration from a real-life match-fixing case in Quebec in 2012. “The guys who play at this level are also much more susceptible to bribery because they’re not making much money yet,” he explains. “We’ve woven that together with a story based on another trust story about a young basketball star from Toronto who got this wonderful academic scholarship to a big college in the US. But when he came back to visit, he went out with his friends and they got into it with some rivals in their neighbourhood and someone got killed.

“This young star player ended up in the getaway car and being arrested a few blocks from this murder. His whole life was gone in the blink of an eye. That was an interesting way to explore how these kids who carry their pasts wherever they go and sometimes they rear up and try to pull them back into whatever place they managed to get out of.”

The creative team, which also includes showrunner Malcolm MacRury, leaned on former professional players for help with their research, while Adams was able to recall the time he spent some of his 20s living in Barcelona and becoming a “fanatical convert” to the sport. “I didn’t have a soccer outlet back in North America so it was a real treat to delve into that world and my own passion for the game and try to bring that to the show,” he says.

Casting proved to be one of 21 Thunder’s biggest challenges, as actors also had to be adequately skilled at playing football to ensure the show looked authentic and the producers could avoid using doubles as much as possible. Often, Riley says, they would find a good actor but would then await the “moment of truth” when they saw the auditionee’s soccer tape.

“When the tape came through and they could play, there was high-fiving and cheering in the producers’ room because we knew it was going to help make the show so much better if our stars could really pass a ball around, shoot and run,” Adams reveals. “Emmanuel, who plays Junior, is a wonderful soccer player. RJ is fantastic on the ball too. Andres, the goalie, is good, and we had Ryan Pierce, who is a former Scottish pro soccer player we found who turned out to be a huge boon. He became an unofficial consultant to the show, whenever we had soccer problems. He was very generous and excited about helping.”

Inevitably, much of the discussion turned to how the show would look once the action transferred to the pitch, with coaches including former player Philippe Fallu helping to choreograph Adams’ scripts.

“He would help us break it down into beats and then we’d sit down with the director and cinematographer, Jim Donovan and Mario Janelle [respectively], and they would try to figure out how we shoot it,” Adams explains. “Hopefully people who are longtime soccer lovers will see what we’ve done and appreciate that. It looks good on the field, which was important for us. It took some practice to figure out how to do it the most efficient way possible and, as the season evolves, that stuff also works better and better on camera on the field.”

The city of Montreal features heavily throughout the series, with filming taking place at locations including Saputo Stadium, home of MLS side Montreal Impact. “It becomes a symbol of what these kids are aiming for, so we needed a few shots of the big house to understand what the objective of these young guys was,” Adams says. “We also wanted to feature Montreal as the wonderful, sexy and exciting place it is. It was more complicated sometimes to get into all the neighbourhoods and be on location all the time but I think it really paid off on the show. It feels real and, like the soccer, we wanted people to come away with the feeling they were watching something real.”

Ultimately, Adams says viewers shouldn’t be turned off by its soccer setting, as the club, its players and coaching staff set up storylines about family, crime and a mystery strand involving the team’s new star signing.

“I think people are really going to be taken by the characters and you don’t have to be a soccer fan to enjoy this,” he concludes. “There’s going to be storylines for everyone.”