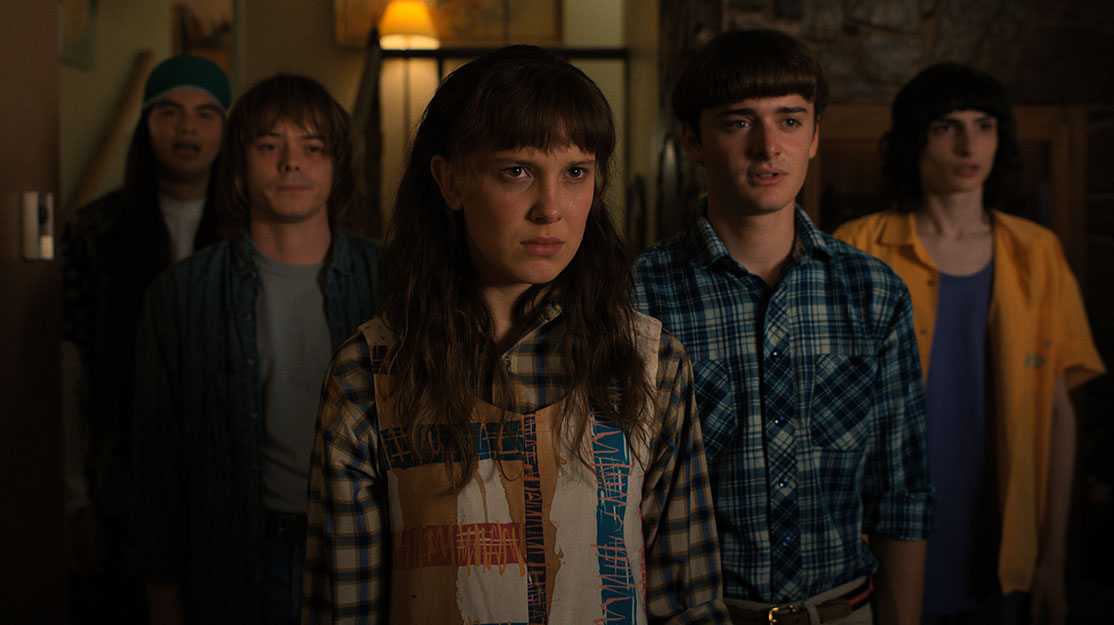 Three years after Stranger Things last aired, Netflix’s supernatural love letter to the 1980s is back for its fourth season – which its creators promise will be its biggest and most terrifying so far.

The show launched in 2016 with the story of a young boy who disappears from his home in the seemingly normal Midwestern town of Hawkins, Indiana. In their search for answers, his friends and family are pulled into a deadly mystery that reveals a dangerous gateway to an alternative dimension known as the Upside Down.

Since then, best friends Mike (Finn Wolfhard), Dustin (Gaten Matarazzo), Lucas (Caleb McLaughlin), Will (Noah Schnapp) and the superpowered Eleven (Millie Bobby Brown) have battled a tentacled monster called the Mind Flayer while dealing with a plot to reopen the gateway to the Upside Down that threatened to bring new havoc to Hawkins.

Season four, which launches on Friday, picks up events six months after the climactic Battle of Starcourt Mall last time out, when the show’s characters fought together to stop the Mind Flayer as police chief Jim Hopper (David Harbour) sacrificed himself to close the gate to the Upside Down.

Struggling with the aftermath and Hopper’s presumed death, the friends have separated for the first time: Eleven and the Byers – Joyce (Winona Ryder), Will and Jonathan (Charlie Heaton) – have moved to Lenora Hills, California, while Mike, Dustin, Lucas and Max (Sadie Sink) remain in Hawkins. Then Joyce receives a mysterious clue that leads her to believe Hopper may be alive in Russia, while a horrifying new supernatural threat presents another gruesome mystery that, if solved, might finally put an end to the Upside Down.

Series creators the Duffer Brothers describe the upcoming episodes as their ‘Game of Thrones season,’ owing to the fact for the first time, the story is defined by the split of characters across numerous locations. Filming on the show, produced by Monkey Massacre Productions & 21 Laps Entertainment, once again took place in Atlanta, Georgia, but this time the production also travelled to Albuquerque, New Mexico, and Lithuania.

In particular, the California setting was heavily influenced by Steven Spielberg’s 1982 film ET: The Extra-Terrestrial – a movie that has been a touchpoint for the series since the beginning, with the Duffers listening to John Williams’ iconic score while writing the pilot episode.

The departure from Hawkins is what makes S4 “a very unique and special season of Stranger Things,” says Matt Duffer. “We have Hawkins, of course, as always, but then on top of that we have California and Russia. We have storylines in those three major locations, and each has a very distinct feel and look. And all these storylines, disparate as they are, do end up, eventually and inevitably, coming together.”

It’s a huge contrast to season three, which was set during summer and was saturated in technicolour.

“We saw it as our summer blockbuster,” says Ross Duffer, “but it had one of the darker endings with Hopper gone and our group splitting up. We continue with that darkness this season. It’s about dread and it’s also about revelations.

“We learn more this season than we ever have about our mythology. We learn a lot about the Upside Down and what this evil force that’s been threatening Hawkins all these years really wants. It’s exciting for us, because a lot of the story is uncovered this season. The tone is certainly darker than it’s been. The goal was to make this the scariest season yet.”

In fact, the Hawkins kids find themselves in a “fully fledged Nightmare on Elm Street-esque horror film,” according to Matt Duffer. “A lot of that has to do with the new villain this year, a more humanoid-looking monster in the vein of classic supernatural serial killers,” he adds. “That’s another huge defining factor for this season.”

That new villain – a creature known as Vecna, complete with toothy appendages and sharp edges – is “our version of Pinhead or Freddy Krueger,” says Ross Duffer, referring to the respective Hellraiser and Nightmare on Elm Street icons. The link to the latter series of horror films is further emphasised by the casting of Freddie Krueger himself, Robert Englund, who plays Victor Creel, a disturbed and intimidating man who is imprisoned in a psychiatric hospital for a gruesome murder in the 1950s.

“Since season one, we’ve wanted to include a villain that could actually speak to our characters, that could vocalise their motives and their thoughts and could also get into our characters’ heads,” Ross Duffer says. “It’s much more of a psychological horror this year as opposed to just a monster movie. This is the first time since season one that we’re going back to the world of prosthetics. We actually have someone in a suit performing on the stage. Of course, there will be CGI this season as well, but we had a real monster for our characters to actually interact with on the day, on stage. It’s pretty creepy-looking.”

A “more human” villain turns up in the guise of Jason Carver, played by Mason Dye, the new king of Hawkins High who starts off as a good guy but events see him spin out of control and unravel.

Another new addition to the cast also extends the Game of Thrones connection. Tom Wlaschiha, known for his role as Jaquen H’ghar in the HBO hit, plays Dimitri, a Russian prison guard who befriends Hopper. Dmitri is smart, cunning and charming – but can he be trusted?

However, it’s Eleven who promises to have one of the biggest story arcs of the season. Now powerless after the events of S3, she must come to terms with who she is as a person beyond the telekinesis she used to battle monsters from the Upside Down.

“Eleven’s journey is very distinct,” Matt Duffer says. “We have this big new evil emerge in Hawkins and, for the first time ever, Eleven is not there. And not only is she not there, but she lost her powers, so she’s helpless even when she learns about what has happened in Hawkins. She’s unable to help them in the same way she has before.

“This season, she has to revisit her entire past, which is very traumatic. She has to go back and re-experience a lot of the things she wished she had forgotten. And that is the drive of this season. More than anything, this season is about revelations. We jokingly call it Stranger Things: Revelations with the writers, because you learn so much about what happened in the past, why it happened and why we’re here now.”

Brown says that like every season of Stranger Things, S4 is “more elaborate and brilliant” than the last. “This season is the season of explanations. This season really starts to answer all of the questions you have about Eleven’s past and her storyline, which was needed, and has been executed beautifully,” she adds.

Eleven starts the season dealing with the loss of Hopper – or so she thinks – and coming to terms with her regular life at high school, where she is being bullied. “She grew up in a laboratory – she grew up very sheltered and was told what to do. This season is about showing her freedom, and about her understanding her own growth and not just having other people tell her how to do things. We start off in Lenora, with Will and Jonathan, and Jonathan’s new friend Argyle, and then Mike comes to town for a visit. That’s when the ball really gets rolling.”

The actor believes splitting up the Hawkins crew was a “great decision,” as the Duffer Brothers have been able to contrast Indiana with 1980s California. “Even just seeing the sets, it’s a completely different environment,” Brown says. “The distance actually creates some development and growth between everyone. But in true Stranger Things style, we always come back together and it always ends up in the Upside Down.”

This season, viewers will learn more about the mysterious Upside Down than ever, with the characters spending more time in this alternative dimension than in previous seasons. “We wanted to see a little bit more of how the Upside Down works,” says Matt Duffer. “When Will was gone all of season one, we didn’t really get to see what he was experiencing or how he was communicating with Joyce. This year, we really wanted to explore a little bit of how that worked, and we wanted to see it from the side of the Upside Down. That was a lot of fun to write.”

However, with Stranger Things already commissioned for a fifth and final season, the latest instalment – which will be released in two volumes, the second launching on July 1 – marks the beginning of the end.

“You can feel the story barrelling towards some sort of endgame or conclusion,” Ross Duffer says. “That’s what is really exciting to us about this season. We had a lot of fun in season three, but now it’s really serious in terms of actually starting to peel back the layers of this mythology. As you get these answers, you really see that we’re headed towards a very clear destination, and toward the end of Stranger Things, which is a little sad, but also exciting for us and, I think, for everyone involved.”

For a show that blends drama, horror, action and comedy, it’s notable when Brown says there are “no limitations” as to where the story could head next.

“The Duffers have written things nobody would’ve imagined,” she says. “Eleven’s storyline is on a much larger scale. There are things I didn’t even think were possible, like our main monster this season. Just that in and of itself is quite crazy. I never thought we would be able to do that on our show, and the fact that there’s so little CGI and it’s already that scary just shows there are no limitations.”