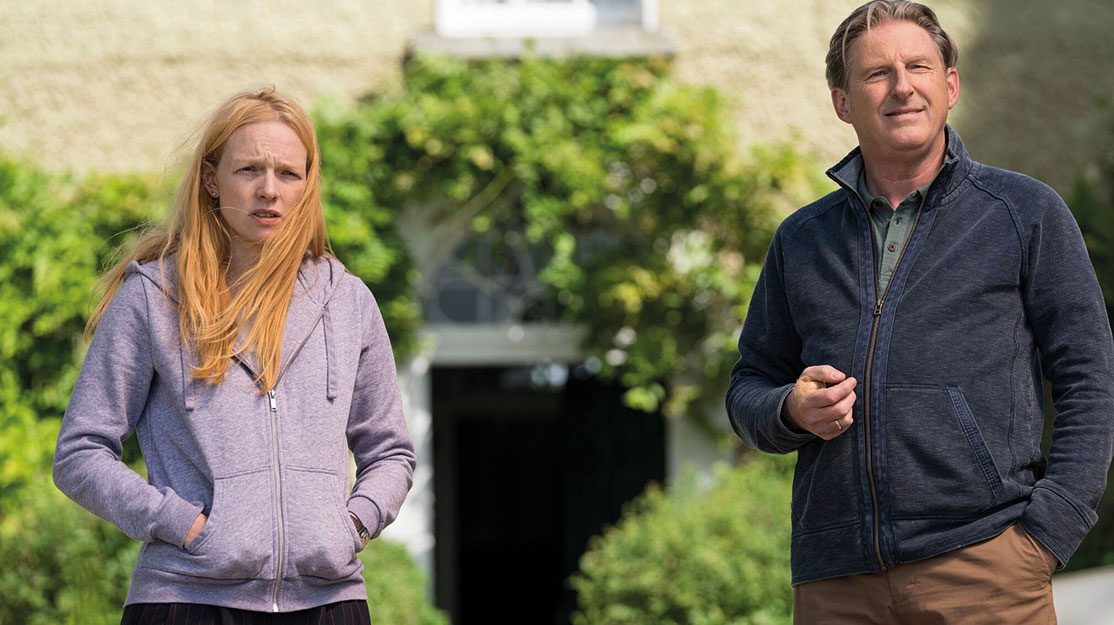 Getting Blood to flow

Sophie Petzal, writer of Irish drama Blood, reflects on a pivotal scene in this psychological thriller about a woman who returns home to her estranged family following her mother’s death. The series is produced by Company Pictures in association with Element Pictures and distributor All3Media International for Virgin Media Television in Ireland.

From the earliest days of storylining Blood, we had written up on the episode two whiteboard, in bright blue marker: ‘LINE OF DUTY DINNER SCENE!!’

You’ll often find playful abbreviations in a writer’s notes – an instantly evocative reference to jog the memory and conjure the tone and feel being striven for in a particular scene. This seemingly jocular nod to one of my and producer Jonathan Fisher’s favourite shows began as just that. But as the sequence developed and unfolded, the reference proved to be one of our most influential starting points and became the key to unlocking the subversive crime drama flair we yearned to inject into the domestic and seemingly ordinary world of Blood.

The scene in question takes place after the funeral of Mary Hogan, wife of Jim – played by Line of Duty star Adrian Dunbar. The couple’s daughter, Cat (Unforgotten’s Carolina Main), has returned home to rural Ireland after her mother’s sudden death following a fall by the garden pond, circumstances she finds suspicious.

Once the crowds had dispersed from Mary’s wake, I knew we would have a quiet, ‘After the Dance’ sequence where our core family members would be sat together, eating leftovers, decompressing and grieving, and it was at this moment that I knew Cat would finally, openly confront her father.

Though it is perhaps the most hilariously inappropriate moment conceivable, Cat has learned by now that it is too risky to confront Jim alone, so she has waited for a moment where the family are together, where she can present the discrepancies and secrets to Jim in full view, so he will have – to her thinking – no choice but to answer them.

Instead, Jim turns the tables on Cat, asking her the question he knows will hurt her the most, the very question that ironically, she has been asking him this whole time – ‘Where were you?’ But when Jim asks the question, he is not asking for an alibi. He is asking, ‘Where have you been all these years? Where were you while your mother was dying?’ It speaks to the very heart of Cat’s guilt, a potentially crippling counter-move.

Perhaps by now, the Line of Duty reference makes sense, referring to the infamous 20-minute interrogation sequences in Jed Mercurio’s BBC police drama where anti-corruption unit AC12 fastidiously present their findings and their theories, only to have the tables turned on them by a questionable yet capable suspect.

At the outset, the aim for this scene was for Cat to put Jim on the spot, and for Jim to turn the spotlight back on his daughter. I wanted the audience to be left torn between the two, trusting no one. That I always envisaged Adrian in the role of Jim when writing this was only an amusing fraction of the motivation for the Line of Duty reference.

What I hadn’t quite anticipated was just how this scene would take on a life of its own, and rather than – as I always worried about – fall into the TV drama trap of ‘normal woman suddenly becomes Sherlock Holmes,’ became one of our most delightfully human and kitchen-sink family moments. It was a sequence that delivered twists and tension, and subversions in the vein of a crime drama, but also all the family dynamics – the drunken, overwrought explosions and black humour of domestic drama.

I vividly remember this scene being read aloud by our full cast at the readthrough. These are often horrifying experiences for writers. You lose all sense of perspective and instead hear every dud line, every missing plot detail. It can be excruciating. But I remember watching our incredible cast read this scene and forgetting I had even written it. I was just spellbound. Watching Adrian stare across the table at Carolina, asking her, ‘Where were you, Cat?’ I remember eyes lighting up around the room. Stolen glances. It was an audience and players moment, the moment where everyone catches the glimpse of the show we’re trying to make – if we don’t cock it up.

Across all productions, there are peaks and troughs. You watch through rushes that work and others that don’t. You learn to roll with the punches, to trust the process. You learn to know you can make things work. But this scene was always our fulcrum, in whatever form, be it a readthrough, an on-set rehearsal, a set of rushes or a first cut.

This was the scene we would watch when times were tough to remind us of the show we were trying to make, of the way we wanted our audience to feel. There never felt to me a scene more representative of Blood than this dinner confrontation sequence and, as such, it will always have the place closest to my heart – alongside, of course, Line of Duty…