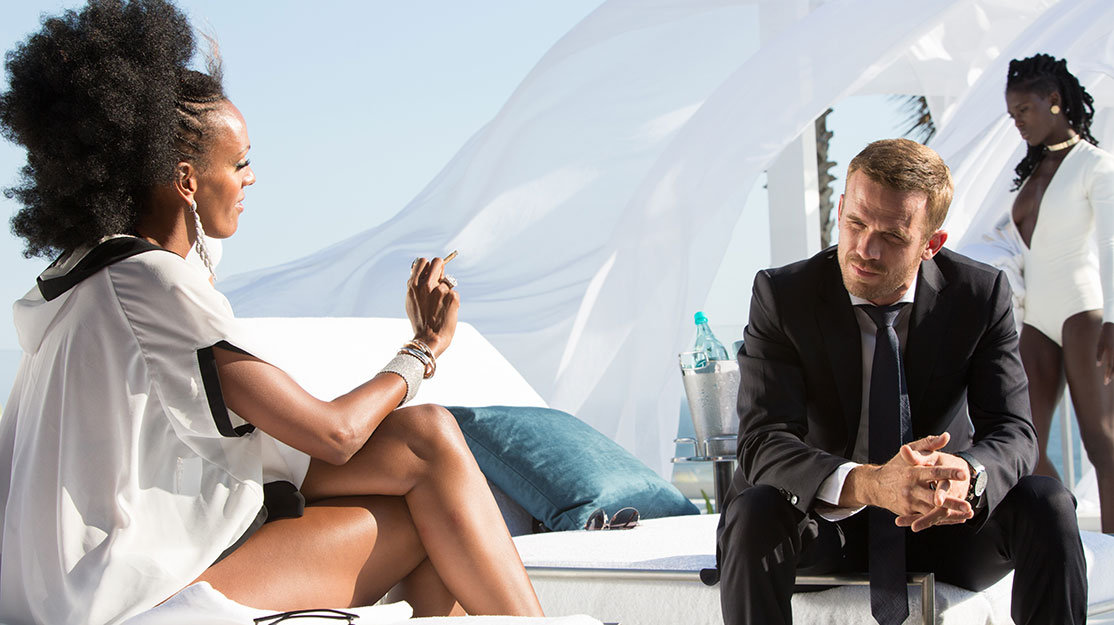 Former Criminal Minds showrunner Ed Bernero takes charge of diamond-focused drama Ice as it heads into its second season. He tells DQ why he is stepping out of his comfort zone and leading a series set in a world rarely seen on television.

When US drama Ice ended its first season, the story teetered on the edge of a classic cliffhanger – the main characters all together and the sound of single gunshot.

In fact, fans of the show – set in the world of the LA diamond business – were also left on a knife-edge, as they didn’t know if the show would be returning for a second season. Confirmation finally came in mid-June, four months after the credits last rolled, as telecoms giant AT&T announced Ed Bernero as the new showrunner for the series, which airs on its Audience Network.

The first season of Ice, produced and distributed by Entertainment One (eOne), launched in November 2016 with director Antoine Fuqua and writer Robert Munic as exec producers. Nine different directors helmed the 10-episode run.

He says the appeal of joining Ice heading into its second season, which is due to air in 2018, lay in its tackling of unchartered territory:“I get sent a lot of things to do and it’s not often where I see something where the cast interests me and it’s a world I don’t think has been explored that much on television.

“I watched the first season and started talking to eOne about some things I thought I would do with it and they responded. I’m just excited to be doing it –  it’s a lot of fun. It’s a completely different muscle than I’m used to exercising, which is more in the procedural vein. This is very much a serialised family show.”

As a former cop, it’s no surprise Bernero’s credits haven’t strayed far from the crime genre, and he admits the structure associated with procedural story-of-the-week series “is just the way I’ve always thought.” He doesn’t mind being known as “the cop guy,” but says it’s refreshing that he can now try something new.

“It’s just a little hard to get Hollywood to try something else – it’s kind of like being typecast as an actor,” he says. “Not that I’m complaining about it. Believe me, there are worse things to be than the cop guy in Hollywood.

“I write this show the same way I write any other. It always comes from character for me anyway, just in a different format. eOne has been very supportive of me doing it. I’ve been very excited to be with people who say, ‘Go do your thing.’”

“They ended season one with everyone together and a gunshot and we’ve picked it up from there,” Bernero tells DQ during shooting on episode three and four. “The thing we’re trying to do a little bit more this year is make it more about diamonds. We’re calling the season ‘Game of Stones.’ There’s four groups we’re going to follow in different journeys within the diamond world. We’re having a lot of fun just sort of taking the characters that were set and taking them in new directions and to new places.”

The show will continue to be a serialised drama, the showrunner says, but if the audience notices anything different from season one, it might be there is less time spent with the family as a whole as the group splinters to deal with their own storylines. “There are a few more individual stories and worlds than there were, but they still all intersect and come together in different ways,” he explains. “To the audience, it should very much feel like the same show with a little more emphasis on diamonds.”

The downtime between the end of season one and the confirmation of season two meant a lot of the crew had moved on to other projects, such is the demand for workers in Vancouver, where Ice is filmed. That meant Bernero had to rebuild the production team, though the cast remains largely intact from season one.

It also presented the new showrunner with the unique challenge of making a “first-season show in its second season.” He explains: “The storylines are new and it’s a completely new creative team behind the camera. The cast has actually been really helpful – we sat down and talked about their characters and they’re welcome in the writing room as much as they want to be. We just talked about what they established as their characters.

“Because we have no one who was in the [writers] room at the conception of it, it’s been freeing to not have to worry about offending anyone or hurting anyone’s feelings. At the same time, it’s a bit of a learning process. We have to figure out who Lady Ra is and who Freddy is.”

Bernero and his team also spent time learning about the world of diamond trading, with diamond experts hired as consultants on the series. Meanwhile, Vancouver doubled for LA, London and Venezuela for the first episodes in the globetrotting second season, while production moves to South Africa for the final five episodes as several characters head to a diamond conference.

“One of the things we wanted to pay attention to is that it’s a global business,” the showrunner says. “The diamond trade touches almost every country, so we wanted to do that. For the last five episodes, eOne is letting us go to South Africa and shoot in Cape Town. We’re pretty excited about that.”

Beyond Ice, AT&T’s Audience Network has been building up a slate of original series including MMA drama Kingdom and polyamorous romcom You Me Her. This summer it drew particular acclaim for its Stephen King adaptation Mr Mercedes, while political thriller Condor is on the way.

“AT&T is no different to a lot of new outlets, in that they want something that makes noise,” Bernero says of the DirectTV-owned platform. “They just want something different. They don’t want it to be a show that could be on CBS or on ABC.

“A family of people involved in the diamond business is something I personally have never seen. When I looked at it, I couldn’t believe no one had ever done this, because it’s such a rich world and it’s so interesting. But that is something any of these outlets are looking for that are kind of new to programming. They’re trying to get something that looks a little different to everyone else. Ice is that in spades.”

Despite its glamorous setting, Ice is a family drama at its heart, notes Bernero, who believes audiences respond most to a family dynamic  whatever form that may take. “For me, every TV show has to have a family at its centre,” he says, whether it’s an actual family or a group that can be identified as one, such as the cops who work together on Criminal Minds.

“House of Cards is about a guy who got screwed over at work. Everybody gets that. So you try to find the elements in the show that everyone can relate to in their world. People instinctively go towards family, especially when they’re watching it at home. They’re inviting you into their home, so it’s important that at the centre of every show is a family – and this show has that.”

Bernero’s move to a serialised drama may be further proof that procedurals have had their day in the US, despite continuing demand from overseas broadcasters and a slight uptick in the number of new story-of-the-week series launching across the big five broadcast networks this fall.

But the showrunner believes the trend for serialised stories, promoted by SVoD platforms, will eventually subside as networks revert to the types of shows that will bring in the most profit.

“People still need something to do on Tuesday night,” he says. “My family all live in the Midwest and they don’t stream everything or binge-watch. There are still a lot of people who watch TV the traditional way and I don’t think that will ever go away.

“Some of the networks are open to procedurals. It’s a bit cyclical, but they’ll realise these short orders don’t make the kind of money that something like Criminal Minds does.”