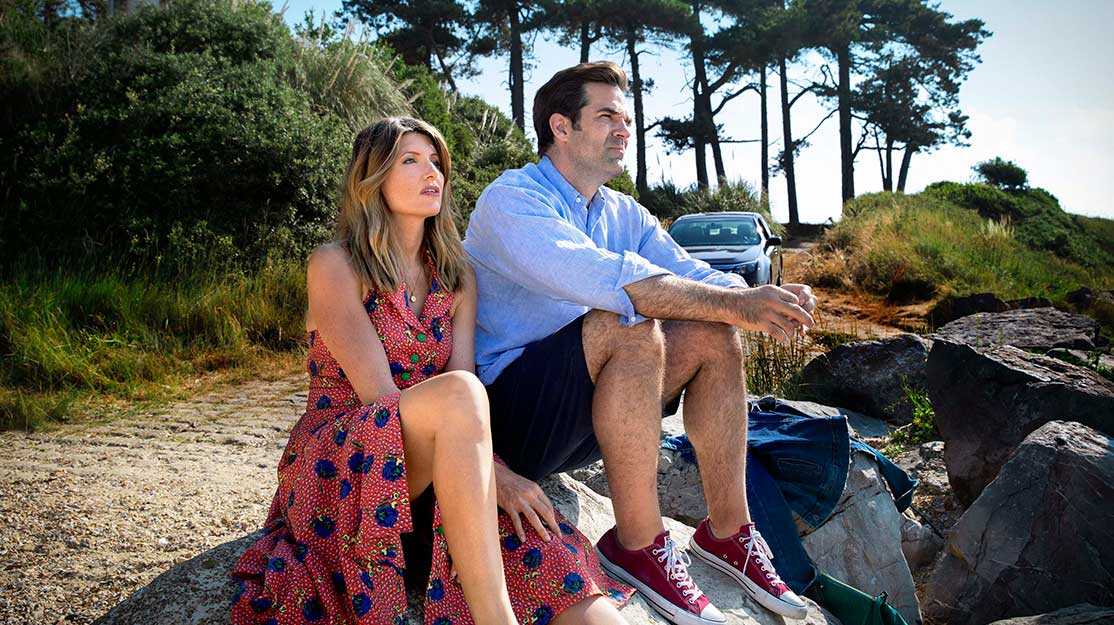 For better or worse

With season four of Catastrophe set to be its last, creators, writers and stars Sharon Horgan and Rob Delaney reveal the secrets of the partnership that drives the hit comedy-drama both in front of and behind the camera.

In this age of partisan politics, Russian bots and fake news, Twitter wouldn’t be the first port of call for many internet users looking for a cordial interaction. Yet it was the social media platform that became the unlikely launching pad for one of the most acclaimed sitcoms of recent years when US comedian Rob Delaney struck up a conversation with Irish writer and actor Sharon Horgan via the site.

Discovering a shared comedy chemistry, the two strangers went on to create, write and star in Channel 4’s hit relationship comedy-drama Catastrophe, which returns to screens for its fourth season on the UK network tonight.

Delaney, who rose to prominence via his jokes on Twitter and was once named by Comedy Central as the platform’s funniest person, recalls the pair’s initial connection fondly: “I wrote to Sharon because she had made [BBC3 comedy] Pulling, and that was the greatest sitcom I’d ever seen, so when I saw that she followed me on Twitter, I was like ‘Wow.’ So we met, we chatted and it was really fun.”

While the idea to collaborate on a series didn’t come immediately, “we just sort of knew that we’d like to work together at some point on something,” says Horgan.

The rest, as they say, is history, with the duo birthing a show that centres on the inventively named Sharon and Rob, who find themselves facing parenthood after a fleeting hook-up during the latter’s business trip to London.

However, things could have turned out very differently had execs at the BBC – who must now be kicking themselves – not decided to pass on the Bafta-winning series after Horgan and Delaney wrote a pilot for the pubcaster. “We took it to the BBC, who said, ‘This is great – we don’t want to make it,’” Delaney jokes.

Asked why the BBC wasn’t keen, Horgan says: “I don’t know. They’ve been lovely about it. Maybe it wasn’t the right thing for them at the time. I can’t remember.”

C4 made no such error, with Catastrophe airing for three lauded seasons to date and covering topics such as sex, fidelity, divorce, depression, drugs and alcoholism as Sharon and Rob, married since season one, raise their family in middle-class London.

After season three ended with Rob facing a drink-driving arrest having relapsed into alcoholism, the new run sees him struggle to regain the trust of his wife, who finds herself having her own brush with the law. “Season four is about the struggle of staying together when there’s no other option,” Horgan explains. “They’ve both fucked up but they’re both trying to stay together.”

Delaney picks up: “At the end of season three, they’ve realised, ‘OK, this is our pile of garbage,’ and they both have to weave it into a tapestry and use it as a blanket. They love each other, and it’s about enduring love – and real love takes work.”

The theme of sticking together is one to which Horgan and Delaney will no doubt relate, with the duo involved in an intense working relationship as the driving force for Catastrophe both on- and off-camera.

Horgan’s behind-the-scenes involvement in the show goes further still, with her prodco Merman (Women on the Verge) coproducing along with Avalon Television and Birdbath Productions. And early last year she struck an overall deal with Amazon, which holds the rights to Catastrophe in the US. ‘Busy’ doesn’t quite cover it. “It’s a lot harder work than I thought it would be, fucking hell!” she says of running her own production company. “It’s really hard work, but it’s fun and rewarding, and it’s exciting getting work picked up.”

Discussing their writing process, the pair reveal that they speak all the characters’ lines out loud, accents included. “We do all the voices, it’s pretty great. You should hear Rob doing my mum – he doesn’t sound anything like Mrs Doubtfire,” Horgan says sarcastically.

As for how much they are like their characters, Delaney explains: “We are Sharon and Rob, but I’m as much Sharon as I am Rob, and we’re also [supporting characters] Chris and Fran, and little Jeffrey.”

“One thing we really try to do is not have anybody sound ‘clever’ or written, so we make sure to say things out loud, then transcribe, then read it out loud 100 times so it doesn’t sound like some smart, clever writer or anything like that,” he adds.

“That’s the difference,” says Horgan. “When you’re writing on your own, you can’t really do that, unless you’re insane. The thing with Rob is he doesn’t always know when amazing stuff is coming out of his mouth – so I just immediately start writing it down.”

Script notes from collaborators are also crucial. “We love notes,” says Horgan. “If we send in a draft of anything and we don’t get notes back, we’re immediately suspicious.”

“Yeah, like either the person is stupid or lazy,” adds Delaney.

When it comes to plot points, Horgan and Delaney admit to drawing quite heavily on real-life experiences, both their own and those of people they know, although they add that this has decreased as the show has gone on. “There are always parts of us in there,” Horgan explains. “That’s helped us – if you’ve lived it, you can be braver.”

One wonders to what extent this might apply to the show’s infamous sex scenes, which are characterised by their mixture of realism and hilarity. “I think we both wanted the sex to be like, ‘Oh Christ…,’” says Delaney, placing a hand over his face in faux embarrassment.

“We didn’t want the sex to ever look pretty,” adds Horgan. “We wanted it to look real and rank.”

And while she notes that such scenes between Rob and Sharon have become less frequent as the series has gone on, fans of sexual slapstick can rest assured that other characters carry the torch in season four, including a very public liaison involving Fran, played by the always excellent Ashley Jensen (Agatha Raisin, Extras).

Jensen returns to the show as part of a strong supporting cast that also includes Mark Bonnar (Unforgotten) and Daniel Lapaine (Black Mirror). But one actor who will unfortunately be missing from the show is Star Wars legend Carrie Fisher, who played Rob’s insufferable meddling mother, Mia. Best known for portraying Princess Leia in George Lucas’s original sci-fi trilogy, Fisher died at the end of 2016.

Like Horgan and Delaney’s meeting, the improbable casting of a Hollywood star came about in unconventional circumstances. “We were at an awards show for a gay magazine – the Attitude Awards,” Delaney recalls. “[Fisher] was presenting an award, and her speech was so funny that Sharon leaned over to me and said, ‘We should get her to play your mother.’ And I was like, ‘Ha ha, you’re drunk.’

“But anyway, we sent her all the scripts and the pilot, and she agreed to do it – probably because she enjoyed spending time in London,” he jokes. “She would improvise – ferociously. It was scary at first, but then we knew to prepare for it and she was just so wonderful.”

Horgan continues: “The first scene she ever did was between me and her on the phone, and we ended up just insulting each other. We just went at each other. This was the first time we’d ever met, and she definitely called me a c**t.”

She adds that Fisher’s passing will be addressed in the final episode of the new season. And with Horgan’s Amazon deal and production commitments, plus Delaney’s increasing presence in Hollywood – he recently appeared in Deadpool 2 and has been cast in the forthcoming movie about disgraced Fox News exec Roger Ailes – Horgan has revealed in an Instagram post that this will be the series’ last outing.

“We’ve been doing it for five years and we’ve made four seasons we love,” says Horgan. “We give it an ending.”

Delaney adds: “We’re very proud and we’ve made exactly what we wanted to make, for better or for worse. We’ve said what we want to say.”