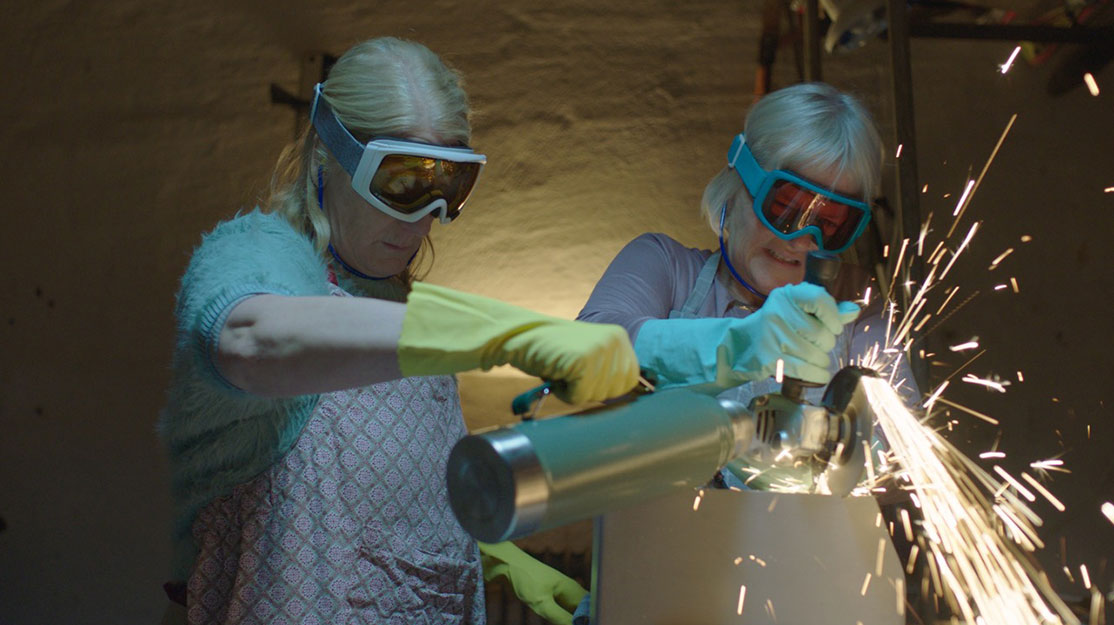 A doctor and a teacher approaching retirement decide to secure their futures by robbing a bank in Swedish comedy drama Enkelstöten. Executive producer Pontus Edgren tells DQ about the decision to swap men for women in the lead roles.

When it comes to adaptations, there are a few techniques you might expect to see when a novel is being prepared for the screen. The story will be tightened or expanded to suit the number of episodes and, consequently, new characters might be added, or existing ones omitted altogether.

In the case of forthcoming Swedish series Enkelstöten (A Simple Heist), however, two women take the lead in roles that were originally written as men. Based on a book by Tomas Arvidsson, it follows a teacher and a doctor who decide to rob a bank.

It was first translated to the screen in a 1980 miniseries, which faithfully adapted the story. But in a new six-part series airing this autumn on TV4, those lead roles have been switched and aged up, as two women in their 60s decide to carry out the heist.

The plot centres on Jenny Bengtsson and Cecilia Svensson, who enjoy a middle-class life in the Swedish town of Kalmar. But with retirement approaching and their bank accounts somewhat lacking, they decide to rob a bank in Stockholm.

The series follows the duo as they weigh up the pros and cons of the bank job, eventually deciding to go through with it, and goes on to detail the heist itself and the aftermath.

But as changing the lead characters might suggest, A Simple Heist isn’t exactly a traditional adaptation.

“We’ve taken basic core elements of the story but to a great extent we have created a new story,” executive producer Pontus Edgren says. “It’s still about a teacher and a doctor who feel that life has been unfair to them. One has gone through a divorce and doesn’t get much out of it economically, and the other has invested her money very badly and her husband doesn’t know that the money with which they were supposed to buy a house in France has virtually gone. They also have big demands on them, from parents and students to patients and their bosses, so they’re squeezed from many different positions.

“All that is similar to the basic story, but there’s a new element in our first episode where the doctor has a patient who’s a criminal and she tells him he’s going to die soon from cancer, so he confides in her that he was going to commit a bank robbery in Stockholm – and says she should do it. Of course, she says she can’t do it because she’s a 58-year-old doctor, but he says that’s exactly why she should do it – because she’s never going to get caught. That’s how it starts.”

It’s a story that is personal to Edgren, MD and co-founder of producer FLX, as Arvidsson is a family friend. The exec is also a native of the town in south-east Sweden where the story plays out.

From the outset three years ago, when FLX picked up rights for the series, women were at its heart. TV4 immediately liked the premise, and placed a commission a year later. The series had its world premiere at Série Series earlier in 2017.

“For this specific series, we really wanted to build the story first, to really set something up that had a good driving force forward and with the twists and turns viewers would find exciting and suspenseful to watch,” Edgren explains. “Then we added a layer of comedy in the script and in the direction too. The original story, about two people with an academic background who become criminals, is set up for comedy and the actors were very carefully picked because they have a great track record of doing great comedy but they are also great actors. They’re not comedians, they’re just actors who can handle comedy.”

However, the actors who came to fill the leading roles, Lotta Tele (Jenny) and Sissela Kyle (Cecilia), weren’t originally in line for the show. “In the very beginning, when we first started looking at having female leads, we looked at them being around 40, but we couldn’t find exactly the right dynamic between the two so we moved up the age and changed the premise a bit to explain why they decided to commit this crime. Then we found them quite quickly.

“We knew Sissela and Lotta very well. Sissela, particularly, has done a lot of comedy and has proven herself to be a great comedic actor. Lotta has more recently gone into that genre and is perfect for this. They’re quite different characters.

“The part Lotte plays is more careful and reluctant; she’s not the one who’s driving this. She’s very hesitant and against the idea in the first episode, whereas Sissela’s character is the driving force. She’s the doctor who gets the idea from her patient. They’ve known each other since they were kids and Sissela is the one with the energy and the drive. It was perfect for what they’re good at. It’s a very good dynamic between the two.”

The limited budgets available in Sweden mean productions are largely filmed in and around Stockholm. But for A Simple Heist, the production team was keen to film as much as possible on location in Kalmar, a five-hour drive from the capital.

“When you produce drama or comedy in Sweden, too often you have to stay around Stockholm because you don’t have the finances to leave the area,” says Edgren, who notes that external shooting on location was combined with interior shots in Stockholm. “So that was a challenge to us because we wanted to stay true to the story. This small town is also an important element of the story. People know each other and what they’re up to; people gossip and talk and you’re never really alone. It’s much more difficult to hide things from others and that’s an important part of the story, so that’s why it takes place in a small town.”

As Nordic noir continues to evolve, A Simple Heist stands out as another example of how the region is pushing beyond the gritty, grisly crime dramas that viewers around the world have come to know and love. FremantleMedia International is selling the six-parter globally.

“With lots of brutal murders, trafficking and paedophiles [in Nordic noir], the international audience might get a horrific view of how we’re actually coping here [in Scandinavia],” Edgren says, “so I think, from a very general standpoint, if we can show ourselves and show the world that we can also make lighter series with hope and joy, that’s what motivates us. The combination of comedy and suspense is great if you can manage it.”

All six episodes of the show have now been delivered to TV4, ahead of its launch later this autumn. This is unlikely to be the last time viewers will meet Jenny and Cecilia, however. “TV4 believes very strongly in this series and has commissioned development for season two,” Edgren adds. “We’re going to start writing after the summer. We’re hopeful there will be opportunities for them to commit crimes again!”