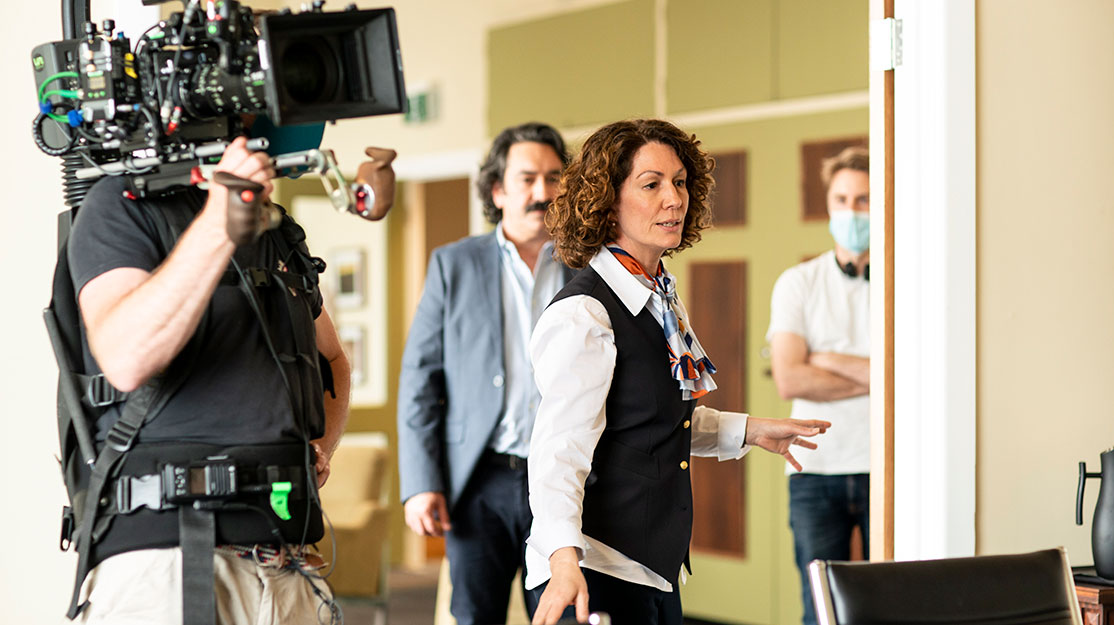 Stand-up comic Kitty Flanagan tells DQ how her dream to make a TV series came true with the award-winning Fisk, which follows a solicitor as she deals with grieving relatives and warring siblings in a wills and probate office.

For more than 25 years, Kitty Flanagan has been making people laugh as a stand-up comedian and performer on Australian series such as The Sketch Show, Utopia and The Weekly.

But her self-deprecating brand of humour isn’t only popular down under. She previously won a legion of fans on the other side of the world during an eight-year stay in the UK, and more recently she stepped behind the camera on Fisk, which won the best comedy series award at French television festival Series Mania earlier this summer.

“It was my dream,” she says of making the funny, often absurd legal comedy, which she co-wrote with sister Penny, directed with Tom Peterson and starred in as the titular Helen Tudor-Fisk. “That’s what I’ve been trying to do pretty much all of my career. Somehow I always ended up on news shows and comedy news shows doing bits, which was actually the best training I could have had. But I also did keep pointing out to people that, after nine years doing it, I just don’t watch the news. Why am I on news shows? I’ve been trying to do longform stuff for a long time.”

As the ABC Australia series begins, former high-end contracts solicitor Helen finds herself in the low-rent world of wills and probate when she takes the job at Gruber & Gruber following a humiliating marriage breakdown and a professional fall from grace. But in her new career, she becomes more therapist than lawyer as she is forced to deal with a stream of bereaved relatives, long-standing family feuds and petty squabbles over money and inheritances.

The idea behind Fisk, which is produced by Porchlight Films and distributed by ABC Commercial, came from executive producer Vincent Sheehan (The Kettering Incident, Operation Buffalo), who initially began exploring the setting of a wills and probate office as a drama.

“There’s drama. There’s conflict straight off the bat in all of the cases I started to read,” he says. “But what struck me was the extent people will go to, not necessarily to get their hands on money, but the diversity of the problems, the skeletons in the cupboard and the conflict between siblings. What was at the root of those was always just so fascinating and full of human nature, but also so bizarre. I found myself laughing out loud at some of the situations and the more I got into it, I found that kept rising to the surface.”

Having known Flanagan for many years, Sheehan admired her ability as a storyteller who could take an audience on a journey in her comedy routines – often involving her own misadventures – and believed she would be the best person to bring a series out of this world.

“Like any show, there was a process of finding exactly what it is,” Sheehan explains. “There was a sense that it would have more of a narrative shape to it, but serving comedy was more important than serving storylines. That was critical to her. The first script that came in, she and her sister had such a strong grasp of the craft of writing not only comedy, but also drama, which meant they could write dialogue and characters. They were lean, seamless scripts.”

The roots of title character Helen can be found in a skit Flanagan performed on The Weekly, in which she skewered psychologist Jordan Peterson’s book 12 Rules for Life by stating that 12 rules weren’t enough – she has 488.

“I pretended I’d written this book called 488 Rules for Life, and then people started going into bookshops and asking for it,” Flanagan explains. “It was just a joke but, from there, the publisher rang me and said, ‘Look, the bookshops are calling saying would you actually write the book?’ I basically wrote this book, which was just a whole bunch of pedantry – it’s basically 488 things that annoy me. But by doing that, I pretty much defined the character of Helen Tudor-Fisk, this woman who is annoyed by every little thing and just won’t let stuff go.”

Flanagan says this led to questions about whether Helen might be too unlikeable for television viewers. But her counterpoint was that the character’s pedantry made her relatable – something she looks for in characters from TV shows she watches herself.

“I don’t think it’s bad if you have unlikeable traits, but there’s got to be a balance and it’s not really my nature to have grossly unlikeable characters or to be unlikeable on stage,” she says. “Some people can do it really well, and I really admire it when they can just be completely antagonistic. But there’s always a cheekiness to it. I have always been one of those comedians – and I don’t think it’s anything to be ashamed of – who when people come up to me afterwards and go, ‘Oh my God, it was like you’ve been in our house and you said all the things we think,’ I’m very happy with that.”

Writing the series with her sister, Flanagan sought to ensure Helen was more than just a one-dimensional character who was too aloof or arrogant for her co-workers. They were also inspired by the sweet moments of The Office and the pathos in After Life – both shows created by and starring Ricky Gervais.

“What happens over six episodes is you get to see that Helen isn’t that, she’s like everybody,” Flanagan says. “She has many sides to her. We wanted to make sure that, yes, she might be spiky on this hand, but then she’s also a well-rounded character that people could relate to.”

The show’s ‘case of the week’ format meant there were plenty of storylines that could be explored. But setting a comedy within a wills and probate office naturally led to questions over the types of situations guest characters might be dealing with. One example of a mother grieving the death of a young person was quickly scrapped when it was found to be lacking sensitivity and even made Helen appear unlikeable. Levels of emotion displayed by the actors on set also had to be dialled back from being too dramatic.

“All I was really hoping was that it would be funny enough on the page that if everybody just played it for real, then it would be funny,” Flanagan says. Turning to Helen’s office colleagues, she adds: “I knew Marty [Sheargold] was going to play Ray, I knew Julia [Zemiro] was going to be Roz, and very early on we tapped Aaron [Chen] to play George. That made it a lot easier because I trusted all of them. They are all comedians so they have great timing and I could hear how they would say the lines.”

One thing Flanagan admits she didn’t think about was how much of the series involved Helen – and, by extension, herself. When she saw the filming schedule, she suddenly realised, “‘I’m in every frickin’ scene. I’m never going to get a scene off, there is never any sitting around,’” she says. “That was something we didn’t think about, because quite often you have those parallel storylines running that make it very easy to switch between and to time-jump as well. We did a bit of writing and changing on the run.”

Then behind the camera, she collaborated with her The Weekly partner Peterson, the pair having experience preparing five-minute segments for each episode of the satirical news show together. That process proved to be the perfect training ground for her promotion to making a six-part, half-hour series.

“It was fantastic, I couldn’t have done it without him,” Flanagan says. “It’s all very well for me to walk around going, ‘Yeah, I’m the director. Don’t say it like this, say it like that.’ He was the one actually making things happen and saying we will need cameras and we will need them here and we will need everything else involved. I was just like, ‘I don’t like the way you said it. Can you make it funnier?’”

Shooting on Fisk was underway in Melbourne last spring when the Covid-19 pandemic hit and promptly sent the city into lockdown, causing Sheehan to scramble to find production insurance and implement additional protocols to ensure the safety of cast and crew on set.

“We were fortunate in that it was a very contained show in so many ways,” he says. “We had to reduce the crew even further just because you couldn’t have that many people in the room. But I’ve always looked for a production model that’s as lean as possible because, in the past, [I’ve found that] the bigger it gets, the slower it gets. Kitty and Tom had time to work with characters and performance. It was really hard getting into production but, when we started, the model suited a lockdown show.

While performing stand-up might be a world away from making television, Flanagan enjoys the freedom to be able to repeat a take if she makes a mistake or knows a line could be funnier, which isn’t an option on stage in front of a live audience.

“But then, there’s something else very immediate with the stand-up,” she says. “When you get it right and you get the laugh immediately [on stage], it is quite odd for comedians doing television where people can’t laugh. Then they call cut and then people will laugh.”

When it launched in March, the first episode of Fisk became highest-rated episode of a non-kids programme on ABC’s streaming platform iView, and the series is still the highest-rated non-kids programme across the network in 2021. The reception to the show has been “so fantastic,” Flanagan says, noting that getting the chance to write her own series “was such a long time coming for me. I was 50 before they gave me a show. I was about to retire! I was always very good at a bit on someone else’s show, yet to take the leap and then to actually be rewarded for it, it’s a stupid thing to say but, more than enjoyment, it was just a massive relief that I pulled it off.”

Sheehan, who has since launched his own production company Origma45, puts the show’s success down to “the singular authorial voice of Kitty as co-writer, co-director and performer. She was fine-tuning the material at every stage,” he says. “Kitty’s comedy is very relatable and the world of the show is undeniably relatable. Everyone will go through an experience like this, and it doesn’t discriminate across class or age or race or culture.”

Flanagan and her sister are now developing a second season of Fisk. But as coronavirus restrictions ease in Australia, she is also hoping to return to the stage.

“I hold the record for most gigs cancelled. My tour’s currently called Kitty Flanagan: Rescheduled. It’s so tedious!” she says. “I was meant to be starting a new tour this year. I got a few try-out shows done in March, I did two in July and then that’s it. Unfortunately, I’m going to have to start again [with new material]. It’s just a nightmare. It will all go in the bin, but it means I’ve got plenty of time to focus on this.”