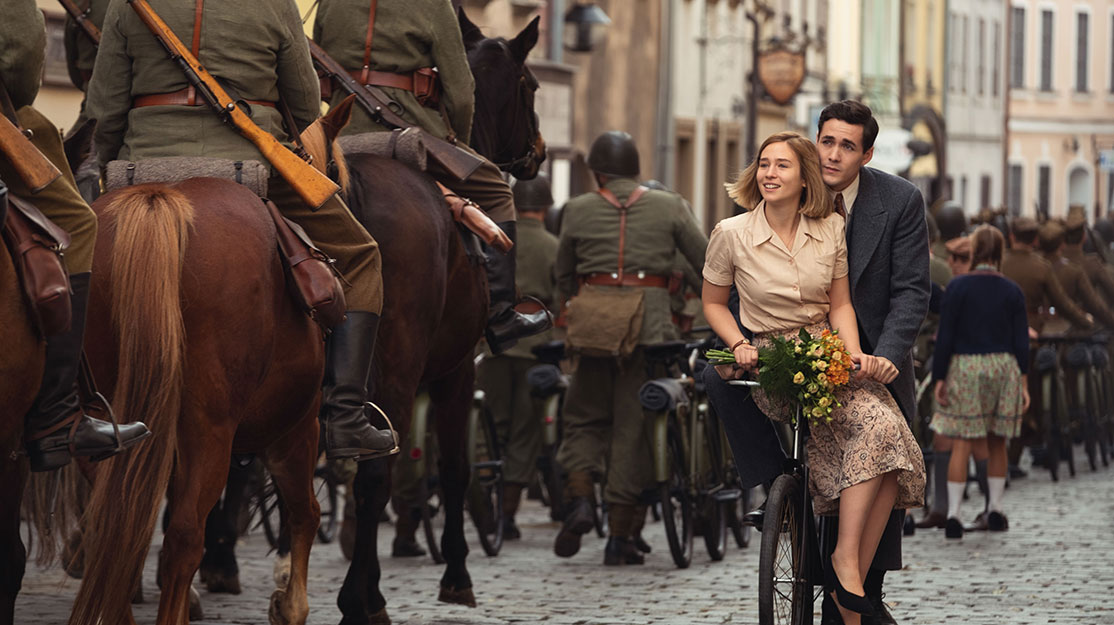 World on Fire aspires to be the definitive Second World War drama. DQ reveals how writer Peter Bowker has taken the global conflict and reduced it to a domestic level, weaving an emotionally tangled web of multi-national characters whose ordinary lives intersect through love, hope and tragedy.

“It sounds more complicated than it is,” explains writer Peter Bowker when he recalls the plot of his latest series, World on Fire. Described as an adrenaline-filled, emotionally gripping and resonant drama set during the first year of the Second World War, it follows the intertwining fates of ordinary people as they grapple with the effect of the war on their everyday lives.

But what makes the show stand out from other wartime dramas, such as HBO’s celebrated miniseries Band of Brothers, is the way it watches the conflict unfold from a multi-national perspective. Polish, French, German, American and British characters are at the heart of the seven-part series, as it charts the experiences of individuals and families facing the fall-out from war.

Bowker says it had never occurred to him to write a period piece about the consequences of military action, despite having penned Iraq War drama Occupation (2009). Yet when Mammoth Screen MD Damien Timmer asked him whether a Second World War drama could ever match the scale and emotional intensity of iconic documentary series World at War, an idea was planted that the writer couldn’t shake. “I turned him down a couple of times but the idea wouldn’t go away, and that’s usually a good clue that you should be writing it,” he says.

At the heart of the story is Harry (Jonah Hauer-King), a British translator who leaves home to work in Poland on the eve of the conflict. Back home in Manchester, he is romantically linked to Lois (Julia Brown) but then falls in love with Polish waitress Kasia (Zofia Wichłacz). Sean Bean plays Lois’s father Douglas, Lesley Manville is Harry’s mother Robina and Helen Hunt is American journalist Nancy Campbell.

When conceiving the idea for the show, Bowker says he was keen to avoid the ghosts of British comedies ’Allo ’Allo and Dad’s Army. One way around them was to employ a natural use of language, with characters largely speaking their native language, rather than have everyone talking English with accents. “It just looks silly now,” he says. “I don’t think you can get away with two Germans speaking English with a German accent anymore.”

The other issue he had writing the series was to avoid some of the language used by real people during the war. “I’ve read a lot of diaries in the Imperial War Museum [in London] and it’s amazing stuff, but of course the language of the 1940s is very much, ‘Gerry is on our tail again,’ which is a kind of comedy cliché now,” he continues. “It’s finding a way to make the language sufficiently of the time yet not fall into those types of clichéd tropes.”

Bowker also looked to introduce real events in a new way, such as following shell-shocked troops on the long road to the Dunkirk beaches, rather than simply meeting them on the sand. But above all, what surprised – and reassured – him the most after reading the accounts of young Polish waitresses living in Warsaw, on the cusp of the war, was learning that the hopes and dreams, fears and worries of people were just the same as they have today.

“They talk about boys, making a decent coffee, being annoyed with their parents,” he says. “Then they say, ‘Something interesting happened today. I joined the Resistance.’ It was so reassuring because nobody’s different in time. Historically, our concerns remain the same and that was exciting and felt new.”

Shepherding the project, which is produced by Mammoth for BBC1 and distributed by ITV Studios Global Entertainment, alongside Timmer has been Mammoth’s exec producer Helen Ziegler, who joined while the show was still in development.

“What grabbed me so utterly and completely is that Pete has this amazing way of making you feel like you’re absolutely there and making it incredibly immediate,” Ziegler says. “It just felt like I had honestly never seen that perspective on the war or felt like I was living and breathing it. I was with the characters and his aim of taking these ordinary lives absolutely sung off the page of the first script.”

For the most part, filming took place in the English city of Manchester and in Prague, with the Czech Republic capital doubling for Berlin, Paris and Warsaw. Then, to distinguish the various settings, production designer Paul Spriggs, lead director Adam Smith and series producer Chris Clough emphasised their architecture. Warsaw, says Ziegler, is a beautiful, glamorous city with an Art Deco style, while the show also embraces Berlin’s strong lines and Manchester’s industry and red bricks.

“It is an epic piece but we always want it to be intimate, we always want to see it through the eyes of the characters,” she says. “One of the rules of cinematic style is to be with the people whose story we’re following and see their worlds from their perspective.

“Paul, Adam and Chris found these incredible ruins and they built part of our Warsaw set within them so that we could show, as the bombing of Warsaw starts, how the city starts to crumble, and then go into the ruins and use them. It was such a clever idea, it’s such a feat. There have been lots of different creative ways to give this piece the scale it needs.”

Bold in scale, the series is also hugely ambitious. World on Fire is designed as a multi-season drama, with each season marking one year of the war. Each episode also includes a major sequence from the conflict, with season one featuring the fall of Paris in episode one, as well as the fall of Warsaw, the Dunkirk evacuation and the Battle of Britain, among other events.

“We’re based in London but we had so many different units filming all over the place,” Timmer says. “There would be a unit filming scenes in Berlin and another in Warsaw and scenes in Manchester, and the rushes would be coming in. Sometimes you’d go from watching Lesley in Manchester to something happening in Warsaw. It did feel like the war was unfolding in real time. It was quite curious.

“There’s a lot of visual effects but we try to do as much in camera as possible. Dunkirk was at St Anne’s Beach in Blackpool. It was the end of May, beginning of June, and for complicated reasons we had no choice but to shoot it in February when we were blessed with the bluest skies, incredible sun and what could have been our Waterloo turned out to work really well. But it was massive in terms of the technical exercise.”

Confined to filming most of her scenes in Manchester and nearby Wigan, Manville plays Harry’s mother Robina, an upper-middle-class woman she describes as frosty, private and cold. Still angry at her husband’s suicide, she mellows as the drama moves forward, particularly when Harry returns with a young Polish boy who she takes into her home.

“What was really lovely to play about this character was that it’s not a complete metamorphosis, but in her own quiet way she goes on a little voyage of discovery,” the actor says. “She finds true feelings for this boy and comes to care for him deeply.

“She lives in this huge pile of a house, alone and doesn’t seem to have much of a life or friends. In some ways, cold as she is, deep down she’s had this desire for something to make her feel and be warm and understand things. That’s what happens. And she’s got some very dry, funny lines as well. Peter has written some choice bits of dialogue for her. It’s upmarket Hyacinth Bucket [the snobbish lead character in UK sitcom Keeping Up Appearances], in terms of the comedy. It’s not ‘ba-boom’ but it’s very dry and witty. It’s lovely. Some of the later scenes with her son are quite powerful and potent.”

Later in the series, Robina discovers Lois is pregnant with Harry’s child, while he ends up marrying Kasia to rescue her from the war. “There’s a great line from Robina,” Manville reveals. “‘If I’d know he was going to marry a Polish waitress I would have seen you [Lois] as more of a prospect.’ That’s her in a nutshell.”

Harry’s relationship with Lois also fosters a blossoming friendship with Robina and Bean’s Douglas, who Manville admits are an odd couple. “What is lovely about it is these two characters, were it not for the war and the situation of her son impregnating his daughter, they’re an unlikely match,” she says. “He’s a bus conductor and she’s a wealthy upper-middle-class woman who doesn’t work. But they certainly develop this friendship that’s really rather tender. She starts to see that underneath all the layers of class, there are people who are human beings who you can have the same conversation with. They just sound different.”

Like Robina, Douglas is a single parent, having been left along with children Lois and Tom after their mother left home. He’s also still struggling to come to terms with his experiences during the First World War. “He’s a beaten man in some ways,” says Bean. “You can still see the strong character that he once was, but he’s been battered down and demoralised by the bloodshed and the horror that he saw out there. He’s not on his own either. There were many who were seen in that way and were treated as if there was something wrong with them. They didn’t really recognise shell shock, which has such a devastating impact on so many men.”

This means that on the brink of the Second World War, working-class Douglas is a conscientious objector – a position that leaves him open to criticism from his friends and neighbours.

“He’s chosen a very hard war to be a conscientious objector in because on the surface it was quite cut and dried,” Bean explains. “He’s very brave to have done that. He gets a hard time from everyone really and when he would go out to get food, people would turn their back on him. It was a very lonely life for him and he’s just trying to do his best. He’s trying to bring his kids up the best he can and he’s still suffering, psychologically and mentally. Then he meets a woman who’s got quite a lot of money. That brings Douglas out of himself and it helps Robina as well because they’re totally different.”

During filming, many of his scenes were emotionally intense, and viewers will see Douglas fall apart when he’s left on his own. But Bean also got to spend a lot of time in a kitchen, next to a fire, having cups of tea and reading the paper, “which was great,” he jokes.

Bowker adds: “What I’m particularly interested in is informing the universal, not establishing the universal and coming down. Sean’s found me out really because all I’ve done is reduce the world to a kitchen.”