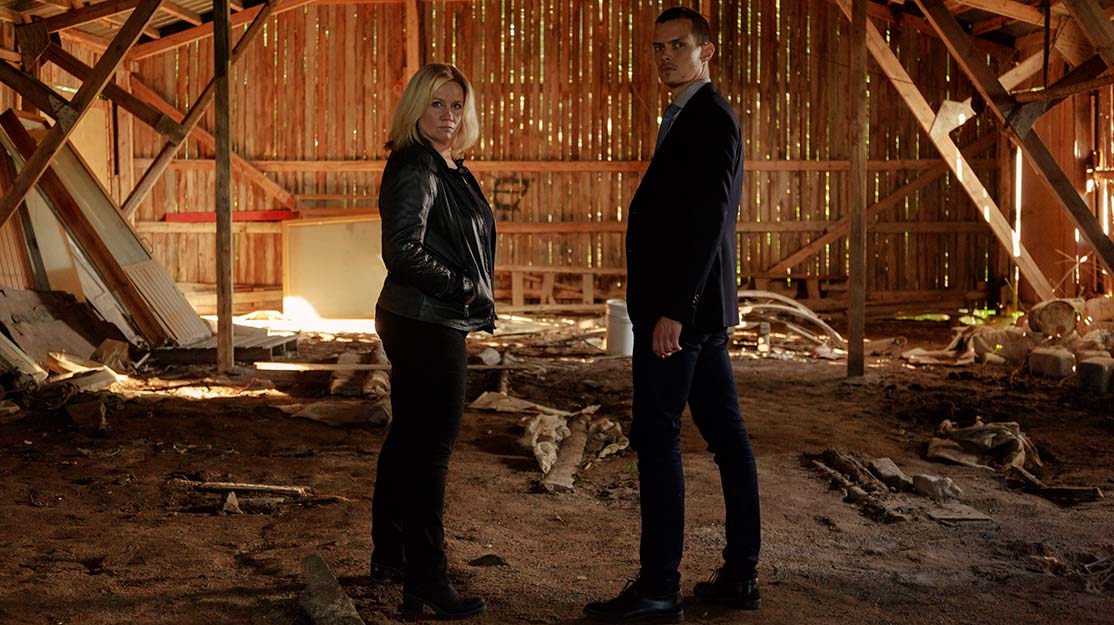 Finnish with a flourish

Crime and religion clash in Finnish drama Kaikki Synnit (All the Sins), the first scripted television project for award-winning writers Merja Aakko and Mika Ronkainen. DQ finds out how they pulled it off.

As the winners of the Nordisk Film & TV Fond prize, which recognises outstanding writing of a Nordic drama series, Merja Aakko and Mika Ronkainen are in good company.

Herrens veje (Ride Upon the Storm)’s Adam Price (2018) and Nobel duo Mette M Bølstad and Stephen Uhlander (2017) are the previous recipients of the award, which is now in its third year and is presented annually at the Göteborg Film Festival’s TV Drama Vision event.

It’s a significant achievement for Aakko and Ronkainen, not least because of the competition they were up against – other nominees included the writers of Denmark’s Sygeplejeskolen (The New Nurses), Iceland’s Flateyjargátan (The Flatey Enigma) and Bølstad again for Norwegian period drama Lykkeland (The State of Happiness) – but also the fact that their collaboration marks both writers’ first venture into drama. Aakko is a journalist by trade, while Ronkainen is best known as a documentary filmmaker.

The series in question, Kaikki Synnit (All the Sins), takes the pair back to their homeland in Northern Finland, with a crime story that unfolds in a deeply religious community. After a 10-year absence, Detective Lauri Räiha (Johannes Holopainen) is sent to investigate the murders of two men in the small town of Varjacka, where he grew up. Lauri, working alongside fellow officer Sanna Tervo (Maria Sid), seeks answers to the case only to discover other truths about himself and his home town, leading to questions over whether one has the power to forgive all sins.

Ronkainen and Aakko have been friends since they were 11 years old, and first began working together on a feature adaptation of a novel Aakko had written. After they were unable to secure financing for that project, they turned their attention to All the Sins, which they had already begun developing.

“It started from the notion that the only way to make internationally relevant TV drama is to tell your local stories,” Ronkainen says. “I’ve always had this feeling that usually Finns try to copy what everybody else is doing, so they’re lacking their own voice a bit. Then we thought, ‘What could be the thing that’s very unique to our region?’ We both live in Northern Finland and a story involving Laestadianism [a Lutheran revival movement] was the immediate idea because it’s something very particular to the Bible Belt where we live. The idea was to combine a strong local story with the theme of religion and a crime story.”

“The world of fiction is quite new for both of us,” Aakko continues. “We have been taking these steps together; it’s a safe environment when we’re hand in hand. It’s funny that we know each other so well – if one of us refers to old neighbours, teachers or stories from our home village, the other gets the idea very quickly. It helps a lot.”

Blending crime with psychological drama and some supernatural elements – “It’s ‘Finnish weird,’” according to Aakko – the key to the series is its characters, rather than the murders in which they are caught up. “For me, the crime story is the glue that holds the thing together,” Ronkainen says. “At best, when the crime story is connected to the themes and stories of the main characters, you have something strong in your hands, and that’s what’s happened here.”

The character of Lauri was born into a very religious family, which turned its back on him when he came out as gay, forcing him to leave his hometown. Events in the series force him to return for the first time in a decade, leading him to work with Sanna, who Ronkainen says has no difficulties with her sexuality. “She practices whenever she can and jumps into bed anytime there is a possibility. As you can imagine, it leads her to some problems during the series,” he notes.

As All the Sins draws on a real religious movement, the co-writers were careful to respect reality. Everything that happens, they explain, is based on or inspired by truth – apart from the murders – an approach that is rooted in their journalistic backgrounds. “I want to use reality as the tools for my art,” Ronkainen says. “The same goes for Merja because she has worked as a journalist, so it’s natural for her to use reality the same way I do. Then, of course, we wanted to make great characters that are real, that you recognise from real life and not from television. That was our guideline. We didn’t want to copy what other people have done on television; we wanted to copy real life.”

The duo used a wall of Post-it Notes to build out the show’s central structure, before sitting down to write the scenes together, adding to and editing the same script documents at once. “I’m not as good with structure as Mika. I’m more used to the psychology of the characters and emotion,” Aakko says. Ronkainen, who also directed the six-part drama, adds: “We were working as one writer but with two brains.”

Production took place over 45 days between May and August last year, during which Ronkainen used a variety of filming styles to create a cinematic look, all the time focusing on the emotion or tension of the scene. The luscious landscape also provides an enchanting backdrop to the series.

“The area where we live, it’s pretty flat. There are no mountains and we think the flatness of the surroundings somehow affects the mindset of the people as well,” Ronkainen says. “The only things that stick out from the scenery are the church towers. Those are the only high buildings we have here. So the landscape is also a very important part of our story.

“It’s something people have not seen from Finland, not even Finnish people. There have been quite a lot of movies filmed in the city of Oulu, around which we were shooting. This sect is quite big in all those small villages around the city, so we wanted to create this imaginary town called Varjaka, which could be any of those little towns but it’s more like a combination of them.”

All the Sins is produced by MRP Matila Röhr Productions for Finnish streaming platform Elisa Viihde and distributed by Sky Vision. While it doesn’t launch locally until April this year, a second season is already in development, although it will head in a new direction and feature different characters.

“I hope we are bringing something new,” Aakko says. “It’s not a proper crime story but there’s love and hope in the end, and a feeling that things will get better for the community. It’s not very dark, it’s actually quite cheerful and light. It’s unique.”

Meanwhile, Ronkainen says he is now entirely focused on the small screen. “You can tell very long stories within a series. At the moment I’m not so into making a feature-length film, because with TV you can tell much longer and complicated stories.”

He adds that Finnish drama is now catching up with the rest of Scandinavia in terms of storytelling and production quality. “There are some really good series being made in the next few years. I hope Finns dare to tell Finnish stories and not copy from elsewhere. That’s the key to success – to be yourself. You can’t be anyone else.”