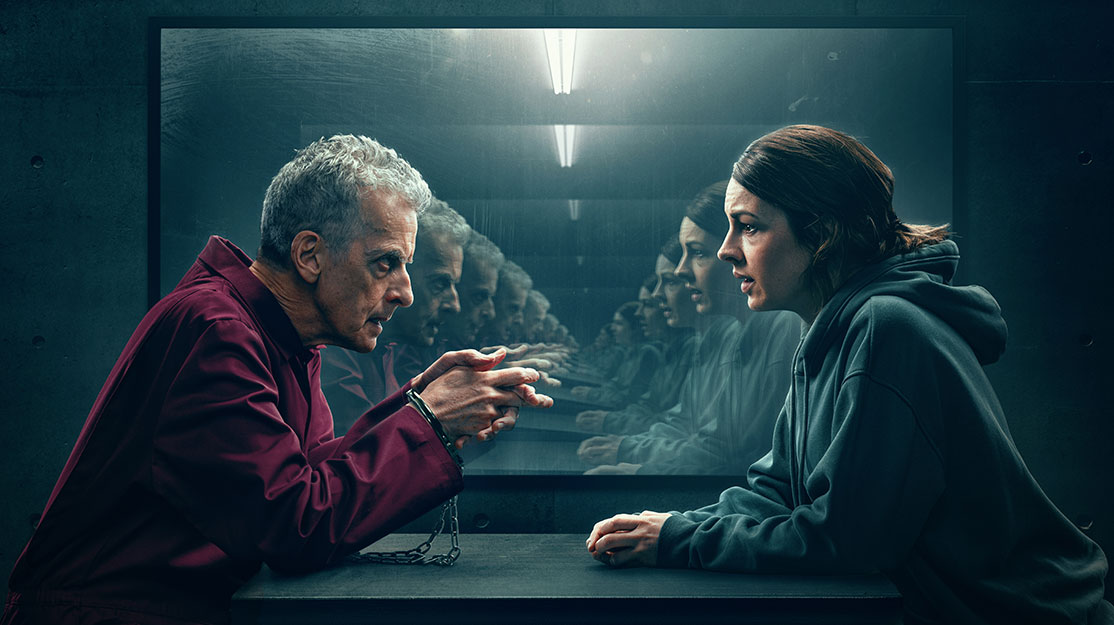 The Devil’s Hour marks the first original show from writer Tom Moran. He tells DQ about penning the Prime Video mystery horror series, receiving advice from Steven Moffat and how he almost gave up his television ambitions.

At first, The Devil’s Hour was just a title. Writer Tom Moran first heard the phrase when it was referenced by a character during an episode of acclaimed US drama Fargo. But it was all he needed to spiral down an internet rabbit hole exploring the phenomenon that is said to occur between 3am and 4am when the barrier between the living and the dead is at its weakest.

“The superstition is that if you’re going to wake up at night, you wake up in the devil’s hour between three and four. In real life, that obviously has a lot more to do with REM sleep cycles and what time people go to bed,” Moran says. But it was the specific time of 3.33am – half of 666, the number associated with the Devil – that particularly piqued the writer’s interest.

“I went down that rabbit hole, I got obsessed with this time. I thought, ‘The next time I wake up and look at the clock and it’s that time, I’m going to be really freaked out.’ Then I just had this idea of what if it happened more than once, or what if it happened every night? What if you woke up every night at that same time? I just got thinking about that as a way into a story. Why would someone wake up at that time? What would the reason be?”

Moran now explores that idea in The Devil’s Hour, a six-part mystery horror commissioned by Prime Video. Jessica Raine (Call the Midwife) stars as Lucy, who is woken every night by terrifying visions at exactly 3.33am. Her son Isaac is withdrawn and emotionless, her mother speaks to empty chairs and her house is haunted by the echoes of a life that isn’t hers.

Then when Lucy’s name is inexplicably connected to a string of brutal murders where she lives, the answers she has been looking for suddenly come into focus as she teeters on the brink of insanity.

Former Doctor Who star Peter Capaldi plays Gideon, a reclusive nomad driven by a murderous obsession who becomes the prime target of a police manhunt led by compassionate detective Ravi Dhillon (Nikesh Patel). But is Gideon what he appears to be?

The Devil’s Hour is the first original series from Moran, whose previous credits include Wild Bill and The Feed. He wrote the pilot back in 2017, with the streamer coming on board in 2019. Progress was delayed by the  pandemic, before filming in London and at Farnborough Studios finally began in June 2021. The show was then delivered earlier this summer with a view to a launch date as the nights draw darker in the run-up to Halloween.

“It can be a bit soul-destroying working on other people’s shows because you watch the final episode and think, ‘I don’t remember writing any of that,’” says Moran, who was the only writer on The Devil’s Hour – an experience that strengthened his belief that some shows would be written more quickly if the showrunner or lead writer picked up all the scripts, rather than sharing them out in a writers room.

“With a show like this, it’s a very complicated story,” he continues. “When I was writing episode six, I would have all the other episodes open at the same time, and I’d be going back and tweaking things and marrying everything up. Obviously when you’re working with a team or something, that’s more difficult. That’s a lot of phone calls and emails, and it slows everything down. It was great just being in control of all of it.”

The few notes he did receive from Hartswood and Prime Video were also valuable. “It’s sadly not always the case to be getting notes from a streamer where they’re making the show better and not just making it different or fitting it in with a certain model,” Moran says. “Johnny [Lewsley, head of scripted originals] and Daisy [Mount, scripted development executive] at Amazon Studios had a really good head for the story and they had a really good sense of what the show was supposed to be. That’s the thing – we were all making the same show. I knew could end up with ‘a camel show’ – the camel is, of course, designed by a committee – and what can happen in that process sometimes.”

Equally valuable were contributions from executive producers (and husband-and-wife team) Steven Moffat (Inside Man, Sherlock) and Hartswood’s Sue Vertue. In particular, writer Moffat provided support at the end of the phone whenever it was needed and empowered Moran to tell the story he wanted to tell.

“What you didn’t get was anyone trying to write it themselves or trying to put their own ideas in,” he says. “It was constructive feedback and it was being there to help me solve problems as and when I needed it.”

The Covid-enforced delay meant Moran had more time to hone the story structure, which features flashbacks and a devilish voiceover from Capaldi. The story had been in place long before the series was greenlit, but the challenges came when he then had to adjust what he had written to accommodate the show’s limitations – namely budget, locations and episode length. “That was all new to me,” Moran notes. “But I really enjoyed that because it’s problem solving. It’s a puzzle.”

Moran’s path to breaking into the television industry will be familiar to many other writers: it was littered with rejection letters. In fact, he might well have ended up as a teacher were it not for his determination to succeed, and the encouragement of his wife, who told him to give writing one more go when he was on the verge of putting his long-held ambitions to one side.

That final roll of the dice was an entry into the 2015 Bafta Rocliffe New Comedy Writing Competition, which he won for his sitcom Printheads. But while he always considered himself to be a comedy writer, Moran now says he couldn’t think of anything worse and admits he fell out of love with the genre.

“It’s hard when you’re writing comedy because the line between the creator and the work is much more blurred,” he says. “If you write a drama script and someone says, ‘I didn’t think that was very dramatic,’ you don’t take that as personally as if someone reads your comedy scripts and says, ‘I didn’t think that was very funny.’ That always feels like it’s more of an attack on your personality.”

As a result, after his Rocliffe win finally opened the door to the TV industry, Moran moved into drama instead. “It was so liberating, because you can get to the end of a scene and think, ‘Well, that wasn’t funny at all’ and it doesn’t matter. It’s one less thing to worry about. Not having to make every other line a joke is really freeing,” he says. “I started writing drama and I took my first script to New York, got a development deal there and then came back to the UK, got an agent and started having meetings, and it all took off from there.”

He began shopping The Devil’s Hour to producers in 2017 after writing the pilot, but says he resigned himself to the fact that the complex story and the world of the show – elements that made it unsuitable for a 15-second ‘elevator pitch’ – meant it might never be made. It then sat in the bottom of a drawer until a friend who worked at Hartswood took it to Vertue, who responded positively to the material. Moffat, however, warned the story would only work if Moran knew where it was heading.

“Writers are very good at making promises. There are a lot of shows that get made that make a lot of promises and then they don’t go anywhere,” he says. “So I went in for a meeting and I explained everything that happens and the answers to all of the questions. And they said, ‘Great, let’s do it.’”

When writing, Moran likes to take a two-hour morning walk to map out scenes and dialogue in his head before writing them up, “trying desperately not to forget them before I get home.” He doesn’t overly plan individual episodes, however, as he tries to avoid getting “bogged down” in a story that might not be authentic to the characters as the emerge on the page.

When it came to creating the creepy, eerie atmosphere that fills The Devil’s Hour, a lot of the show’s sense of dread was in the script – a remarkable feat considering Moran’s own unease with the genre. Directors Johnny Allan (The Irregulars) and Isabelle Sieb (Vigil) were then tasked with bringing it to life.

“Johnny said that when he was reading episode three, he was terrified by certain moments and had to stop reading it late at night,” Moran says. “It was just too scary for him, which is strange because I really struggle with horror as an audience member. I get freaked out very easily. It stays with me; I find it quite traumatising. When I first set out to write it, it just naturally went in that direction. If I hadn’t written it, I’d probably be quite freaked out by watching it.”

Moran would also discuss character arcs with Raine and Capaldi every day on set, informing them of events relating to their characters far beyond the events of the first season, which opens with Lucy and Gideon together in an interrogation room before the action switches to Lucy breathlessly waking up in bed as her clock displays 3.33am.

“The big question of season one is why and what’s going on? We start weaving these stories together until we get to episode six, which is the place where everything comes into focus and we finally understand,” he says, promising that viewers will be rewarded for watching the whole series.

“Episode six is one of those bits of storytelling that’s designed to keep making you go, ‘Oh, now I get it,’ because as an audience member, I’ve always found that really satisfying. That’s always been something I’ve wanted to do for an audience. But I also don’t want to take two years or three years and make an audience wait that long to get that satisfying sense of closure.”

He can also picture the final shot of the series, which he hopes will return for additional seasons. “Before I’d written the first episode, I knew how this whole story ends,” he adds. “It’s just a case of whether we get to tell it or not.”