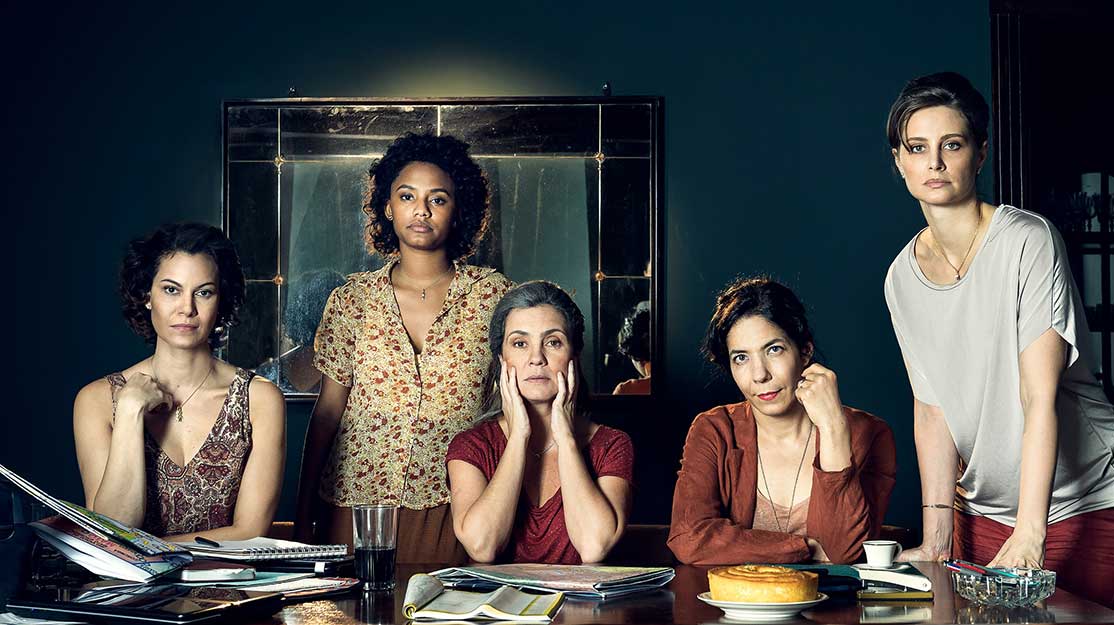 Maria Camargo, lead writer of Brazilian drama Assédio (Harassment), tells DQ about the real-life themes and issues that inspired this series about a group of women who stand up to the doctor who sexually abused them.

Described as one of a “new breed” of drama series for Brazilian broadcaster Globo, Assédio (Harassment) was notable in that it first launched on the network’s streaming platform, Globoplay.

The subject matter is also particularly topical and timely, dealing with many of the issues at the centre of the #MeToo campaign against sexual harassment, a topic of significant relevance to audiences in Brazil and around the world.

The story follows a group of women who get together on social media to expose the sexual harassment they have all experienced at the hands of a renowned specialist in reproductive medicine, beginning when one of them decides to reveal what had until then been confined within the walls of the doctor’s office.

Significantly, the drama is split into two sections. The first depicts the rise of Dr Sadala, in contrast to the women’s suffering. The second takes place after the women unite and break their silence.

Filmed on location in São Paulo, with the big-city backdrop juxtaposing with the victims’ loneliness, the 10-part drama is written by Maria Camargo (The Brothers), together with journalist Bianca Ramoneda plus Fernando Rebello and Pedro de Barros. Behind the camera, the series was led by artistic director Amora Mautner (Precious Pearl, Brazil Avenue), who guides the limited series, with general direction by Joana Jabace and direction by Guto Botelho. Globo is the producer and distributor.

Carmago tells DQ more about the show, which is among the new dramas being screened at Berlinale’s Drama Series Days next week.

What were the origins of the story?
Maria Carmago: The series is fictional, but based on real life – the case of doctor Roger Abdelmassih, a fertility expert who was convicted of sexual abuse. It wasn’t his story that interested me, but the symbolic significance of his crimes, his capture and his conviction. For me, the central conflict was the clash between a world that has always been too violent for women and women who, together, break this cycle of violence. The plot reflects a world in transformation.

How was the series inspired by the ongoing #MeToo movements and other similar groups?
When we started writing Harassment, there already were some complaints on the internet of harassment, violence against women and sexism in Brazil. The issue was in the air – #meuprimeiroassedio (loosely translated as ‘my first harassment’), for example, appeared on social media in October 2015, two years before #MeToo. When the movement in Hollywood came to light, we were already writing the series. Therefore, more than an inspiration, the movement was a confirmation that we were on the right path.

Describe your writing process with Bianca Ramoneda, Fernando Rebello and Pedro de Barros.
It was a little different from what the writers room used to be. Since we were dealing with a structure that had many plots, most of the time the work was distributed among the writers by story groups, not by chapter. I structured the episodes after the creation meeting, with the scenes already described and in the right order, and Bianca, Pedro and Fernando wrote the scenes from the groups they mastered best. At the end, with the scenes written, I did the final writing of the episode.
There’s a little bit of everyone in the series – and also of Eduarda Azevedo, a researcher who helped us explore the true story and turn it into fiction in a responsible manner.

Why did you decide to tell the story in two distinct parts?
The construction of the narrative had a clear intention: to make the public follow very closely the story of each woman and, then, their union – a union that gives them the strength to face the doctor. In the first half of the series, the antagonist is on the rise, increasingly powerful, rich and influential. The women, on the other hand, are falling down, living in an increasingly deeper hell. They are presented in their suffering, one in each episode, like voices being added to a choir.
In the second half, this choir is complete and, together, the women gain strength – unlike the doctor, who is cornered and starts to decline. Anchored in a world that allowed him to do what he was doing, he weakens against the union of his victims. Both parties are, therefore, constructed from two main opposing dramatic curves, representing the doctor and his victims. A third vector is added to the latter: the journalist who helps the victims during the complaint.

How did you build the characters of the women at the heart of the series?
The actual story only happens because the protagonists are women, with desires, vulnerabilities and, above all, a strength that is essentially feminine. In Harassment, women are the ones who run the world.
Having these multiple female protagonists as a starting point, we did thorough research into the story and the real victims. We investigated in depth their testimonies, their motivations, the paths they travelled between violence and their search for justice, starting with the desire to become mothers and their frustration at not being able to fulfil this wish. Motherhood has always been a central point for me. Despite not facing obstacles to having a child, I always thought that, if I had, I would have done anything to get pregnant, because it had always been my greatest wish.
After investigating and identifying the victims, we knew it would be impossible to account for all their stories. Therefore, we built fictional characters to represent the tragedies experienced by real women. Stela, for example, is the woman who keeps silent for a long time, has her life completely destroyed by the doctor and is not able to make the dream of motherhood come true. Eugênia, on the other hand, is more emotionally structured and has her husband as an ally, but lives in conflict regarding the paternity of the child generated in the fertility clinic. Maria José has a more humble origin, having crossed the country and sold her assets to accomplish her dream – a dream she achieves, but at too high a price: in addition to the rape, she is also a victim of violence from her husband, who doesn’t believe her.
With the six main characters – and other women, with smaller roles – we tried to encompass hundreds of stories balancing facts, versions of the truth and, of course, fiction. We did everything within our grasp to make the passage to fiction gently and responsibly.

Why did you decide to introduce a journalist to help them fight their cause?
Like the six victims represent aspects of a story that involved so many other women, Mira, the reporter, represents the media professionals who were essential to capture the doctor and served as an inspiration for the limited series. Obstinate and obsessive, she is a symbolic character. The role of the press in the case was hugely important and could not be left out.

How is Dr Roger Sadala presented – as an evil character? Or is it not as simple as that?
He is a classic antagonist, in a way. He is awful, but, at the same time, extremely charming and seductive. His out-of-control libido, combined with a social, political and legal permissiveness that favoured him, made him a criminal. It’s hard to create nuances in a character like this but, when writing a character, you have to put yourself in his shoes, say things he believes in, believe in the stories he tells himself. Without this, he would be an excessively stereotypical villain. We wanted him to be a character whom anyone could run into. These are the worst antagonists – the ones you can meet in real life. Even more in this case, when we start with a man who exists in real life and whom several women had the misfortune to meet.
We tried to build all characters, including the secondary ones, like this, focusing on their truths. But what prevails, of course, is the women’s point of view. We, as authors and directors, took their side.
Harassment has multiple groups that intertwine, and we include a few moments where the doctor and his family are shown. But in the scenes of the attacks, we are always with the victims. This careful approach was developed from the beginning. We’re not seeing with the eye of the aggressor.
In this sense, I go back to what Dr Roger Sadala represents – a world established on a patriarchal and sexist operating model, which accepts, enables and encourages violent behaviour that should not be tolerated. Apparently harmless harassments pave the way to cases of unspeakable sexual violence. This is what we’re talking about: a system that silently allows violence and abuse against women, and a movement of women who break this silence.

How did you and the other writers work with artistic director Amora Mautner?
The screenplay and direction teams always worked in line; we were telling the same story. It was our first time working together and it was a happy marriage.
Amora has a very special insight into the mechanics of a scene, a sophisticated eye and inexhaustible energy to make things happen on set. And there was, of course, affinity, which is rare. I like the way she directs, she likes the way I write. We have the same type of observation – we like the same images. I graduated in cinema and, before becoming a screenwriter, I was an assistant director and dabbled with photography. These past passions are present in my writing and helped our aesthetic affinity. Additionally, it was very good that we were women helming the project.

What do you hope viewers take from the series?
In addition to entertaining, I hope the show can also cause reflection. I’m not talking of pamphleteer speeches that kill any drama, but of the choice of theme and how to tell it, of ways to see the world. I believe a good story can help change things, especially when it is strongly intertwined not only with reality, but with a reality that needs to be questioned and modified.

How is Brazilian drama evolving for writers?
Writing is not easy, in Brazil or anywhere in the world. In dark times such as those in which we are living, this is exacerbated. On the other hand, we have an abundance of raw material. Brazil is an astonishing country, in good ways and bad.
What’s good is that female voices have gained space. Of course, we will always have men writing about women and women writing about men – empathy is almost synonymous with dramaturgy – but the fact is that, for generations, there was much more room for male storytellers, particularly in the audiovisual sector. The diversity of perspectives and voices is an evolution, and it is good for everyone.