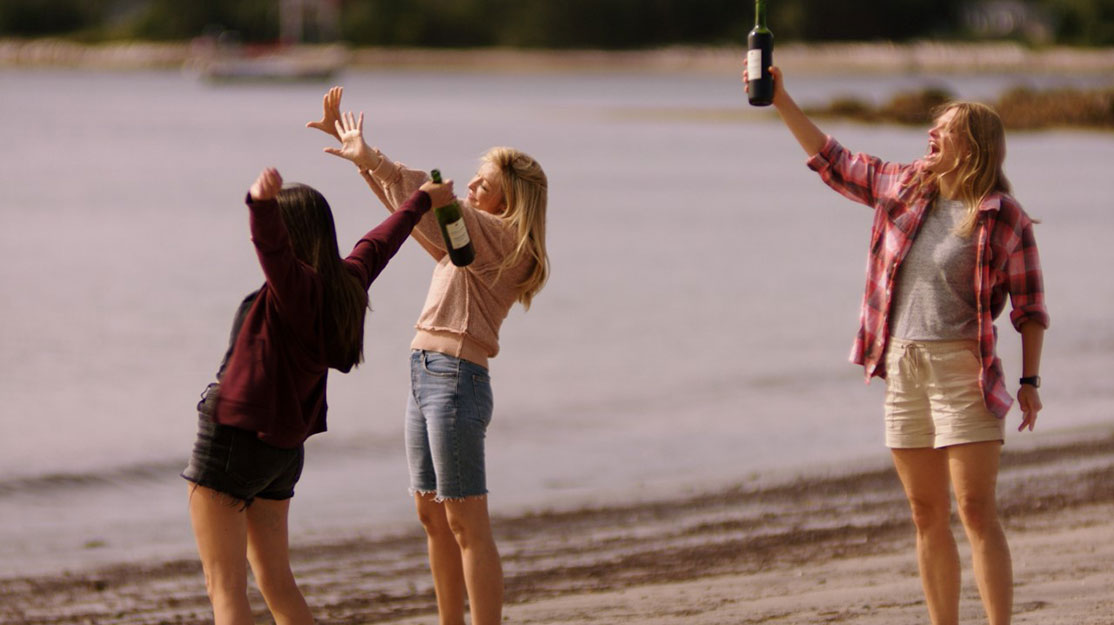 Showrunner Sheri Elwood opens up about the real-life origins of her Canadian dramedy Feudal and explains how a story set at a summer resort in Nova Scotia provided the perfect bubble for filming amid the pandemic.

After working in LA for many years, Canadian writer Sheri Elwood was asked what kind of show she would be interested in making back home. The answer, it transpired, was a love letter to the place where she was raised, having grown up as part of a large family and with parents who owned a summer resort in picturesque Nova Scotia.

The Lucifer and Call Me Fitz exec is now in the middle of production on Feudal, an eight-part series due to debut on Canadian pubcaster the CBC in 2021. It tells the story of the Finley-Cullens, a dysfunctional clan of adult half-siblings battling for control of their family business, The Moonshine, a ramshackle summer resort on the south shore of the Atlantic province.

Corrine Koslo (Anne with an E) and Peter MacNeill (This Life) star as Bea and Ken Finley-Cullen, who must decide which of their flawed brood is fit to take over the business, a slice of paradise that is quickly becoming a nightmare.

Jennifer Finnigan (Salvation) plays Lidia, an architect and the eldest sibling, who wants to redevelop and exploit the valuable coastal property, giving her an opportunity to shine and overcome past disappointments; while Anastasia Phillips (Reign) plays her often-overlooked younger sister Rhian, who sees The Moonshine as her own chance to shine.

Other family members include Lidia’s sister Nora (Emma Hunter), a DJ who knows all the family secrets; Lidia’s musically gifted brother Sammy (Alexander Nunez), who has secrets of his own; and ageing party boy Ryan (Tom Stevens), Rhian’s twin, who is running an illegal business out of the resort.

“There’s a lot of love, but also a lot of fighting,” showrunner Elwood tells DQ from the show’s set. “This is a story I’ve always wanted to tell because my family does run such a place and we’re a big old blended family of adult siblings. My parents are old hippies and they’re getting ready to retire, and I just thought that was such ripe terrain to tell the story of how a place, even one as wacky as theirs, has the ability to draw people back in and keep eternally repeating those same patterns from childhood. I thought that was a very rich tapestry to start to unravel.”

Produced by Six Eleven Media and Entertainment One, which is also distributing the series, the show unfolds from the perspective of Lidia, who left her family to go to school in New York and has never really been back. But when she does return for a family funeral, she is drawn back into the family fold when she discovers she has inherited half of the resort.

“It all comes to a head because the facade of being fabulous and successful really hasn’t been working out,” Elwood says of Lidia. “Her marriage is falling apart. Her son is depressed. Her daughter is in full rebellion mode and she sees this as an opportunity to solve her life problem – but she creates a whole new barrel of problems in the process.”

While family dysfunction is a universal theme, Elwood believes Feudal is unique because of its setting.

“We’re set on the south shore of Nova Scotia, which is a very particular corner of Canada,” she says. “It’s not the Canada of jaunty sailing craft and lighthouses. It’s very shaggy. It’s populated by rum runners and old hippies and artists. It is a very interesting corner that I’ve not really experienced anywhere else, but it’s also incredibly beautiful. It’s beautiful and broken at the same time. That’s going to give it a unique twist.”

CBC bought the series “really quickly,” based on a five-page pitch Elwood had pulled together that chimed with her reputation for writing about twisted family dynamics.

“I wasn’t pitching a dark, gloomy crime drama, although those are amazing,” she says. “There’s a depth to this, but there’s also a lightness. And it’s just fun, because this family is so eccentric. There’s a desire for a little bit of lightness right now.”

The writers room was opened at the start of this year. But eight weeks in, it was broken up as the fallout from the Covid-19 pandemic became apparent. Work continued remotely, which Elwood admits was more “exhausting” than she anticipated, but the scripts were completed without the narrative changing.

In fact, the nature of the series has protected it from any potential coronavirus infections, as the cast and crew have been able to create a production bubble on Elwood’s real-life family resort, where Feudal is being filmed.

“It’s a summer business, so we couldn’t shoot here [during the high season] but there’s an enormous amount of land so we built a replica of the real thing in its shadow. It’s crazy,” she says. “My mum shows up on set, which is bananas, because the actor playing my mum is there now. I don’t think I quite anticipated the meta nature of the show, but because it’s so contained, it was very Covid-friendly.

Even so, tests are regularly carried out and “all of our production facilities are sanitised to within an inch of their lives,” Elwood notes, adding that intimacy scenes have been boosted by the fact Lidia’s husband Daniel is played by Finnigan’s real-life husband Jonathan Silverman. “So we were able to sort of sidestep that little ‘no kissing’ loophole. Before we started, I talked to the cast quite extensively about their comfort level, and it all came down to being tested and everyone being safe and creating their own little internal social structure so that we weren’t out running around on weekends and potentially bringing Covid to set. We’ve really done everything that we possibly can to keep everybody safe.”

In these times of remote working, the showrunner says one of her biggest challenges has been simply keeping people’s spirits up. “Much of the magic of a writers room is being able to go out and grab a beer and be in the same room, and trying to replicate that energy over Zoom was a little tricky,” she says. “Everyone was so freaked out that just keeping spirits up became another part of my toolkit. But they pulled through. They’re awesome.”

Writing the series with Matt MacLennan, Kate Spurgeon and Josh Saltzman, Elwood also directs alongside Scott Smith and James Glenn. The show is backed by a soundtrack featuring classic rock songs from the likes of Neil Young, Fleetwood Mac and The Doobie Brothers, and its heightened story is grounded by a natural shooting style that also uses lens flares to create a warm summer look.

“While this is a comedy and a slightly heightened version of reality, my rule of thumb is to shoot the show as grounded as possible,” Elwood says. “The soundtrack has helped drive our visual style as well, because one of the tag lines for the show is, ‘This place was two stars on a good day, and that day was in 1979.’ It’s a contemporary show but, when you get here, it’s like stepping back in time. The look and feel of the show is very fitting.”

But how do her family feel about a fictionalised version of their own lives being produced so close to home?

“I’ve been doing it since I’ve been a little girl so they’re accustomed to it,” the showrunner says. “But I was very nervous about this one because it is my grown-up show. It’s funny but we’re dealing with real family issues, adult addiction and infidelity. It’s a fictionalised version of the truth, but they’ve been really good sports about it.”