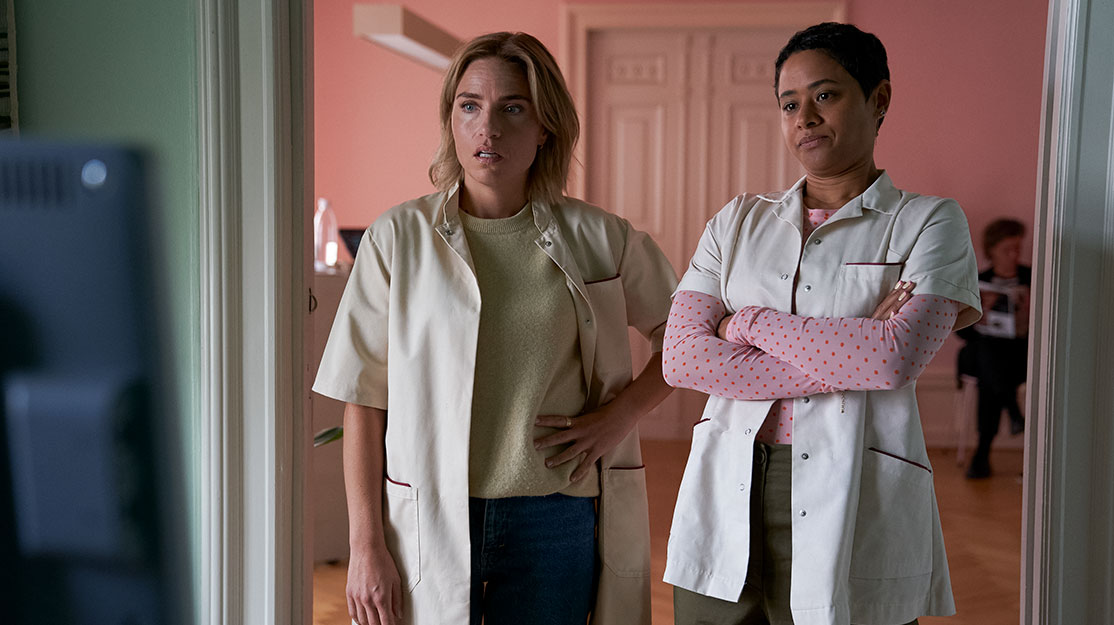 In Danish series Skruk (Baby Fever), a fertility doctor who wants a baby of her own takes dramatic steps to become pregnant. Creators Amalie Næsby Fick and Nikolaj Feifer tell DQ about their partnership, creating a flawed leading character and how their own experiences influenced the story.

In Danish, to be ‘skruk’ is to have the feeling of wanting children – a term similar to ‘broody’ in Engilsh. Both words perfectly describe Nana, the character at the heart of a six-part series also called Skruk (aka Baby Fever).

The Netflix romantic comedy-drama centres on fertility doctor Nana and the clients she meets and treats. Secretly harbouring her own desires to become a mother, Nana drunkenly inseminates herself with a very particular sample of semen – one belonging to her ex-boyfriend – starting a chain reaction that has huge consequences for her professional and private lives as she tries to explain her pregnancy and win back her long-lost love.

Creators Amalie Næsby Fick (Sex) and Nikolaj Feifer (Afhøring) had been friends for more than a decade, having worked on each other’s previous shortform projects. But it wasn’t until they were approached in late 2019 by Dorthe Riis Lauridsen and Anders Toft Andersen at producer Apple Tree Productions that they finally got the opportunity to work together on a longer project. The pitch – to make a show that centres on a fertility clinic – was also one to which they could bring first-hand experience.

“Amalie now has Wester, who is about three-and-a-half, and I have a young daughter called Vilje and she’s almost three,” Feifer says. “When we started this project, it was fairly new but experienced ground for us because we have both been through fertility treatment. It just resonated really quickly with us. It’s an arena that’s filled with hopes and dreams and disappointments and a lot of ups and downs.”

Part of their ambition with the series is to shine a spotlight on a subject that for many people remains taboo. As a heterosexual man, Feifer recalls the first time he spoke to his male friends about fertility treatment, noting his surprise at discovering he wasn’t the only one who had used the service.

“It was like, ‘Hey, I’ve known you guys like my whole life, we’ve talked about you guys having kids and I know their names – how come I didn’t know fertility treatment was part of this?’ For me, that said, ‘OK, I suppose for some people this is still very much a taboo.’”

For Fick, who is gay, fertility treatment was less of a taboo subject. Instead, she found herself answering numerous questions on the issue, such why her wife was the person to carry their son and how they chose their donor.

“Questions like that can sometimes be OK but sometimes also very hurtful,” she says. “For us, that’s one of the most important things we would like to address [in the series]. We chose to make the main character a doctor, not a person going through the treatment, so we had more opportunities to go into more diverse stories and clients and she can touch upon all these people’s different processes.

“Then what we really wanted to do was make something where you can see a mirror of your own experiences. It was important for us to try to be part of this conversation about fertility treatment and try to make it less of a taboo by making a light-toned show, a comedy show, with a lot of love in it.”

But while the couples seeking treatment bring a mixture of fun and sadness to the series, the creatives were keen to ensure the show never made fun of them. “That’s not really where the humour is,” says Feifer. “It’s more like a workplace comedy, where the boss isn’t really up for the job or maybe she is too shy of conflict. We try to place the humour there on the ground.”

“When sitting in waiting rooms at fertility clinics and public hospitals, you start to look at all the patients and staff,” Fick says. “These are the people who can maybe make my dream of being a parent possible. They are basically performing small miracles but, at the same time, it’s also just a work environment, just an ordinary job.”

At the centre of the story is Nana (Josephine Park), a character whose competence at work contrasts with her clumsy personal life. At the clinic, she is the star performer, who isn’t afraid to put her clients at ease with a well-placed lie. But after becoming pregnant herself, her life dramatically implodes as she struggles to contain the truth behind how she got pregnant and the fallout from the ‘break in’ at the neighbouring sperm bank.

“It was important for us to make a flawed character who is entertaining and who does stuff that is more fucked up than what you’re doing yourself,” Feifer says.

“That’s what comedy can do,” Fick continues. “You can make characters that are more fucked up than they would be normally, and that’s nice. It’s very important that comedy says it’s OK to have flaws.”

Feifer and Fick were also very interested in Nana’s approach to lying – something we’re told not to do but that everybody does all the time, to varying degrees. Nana uses lying to relate to her patients and help them when they are questioning their decision-making or their relationships, but it later comes back to haunt her when finds she has to tell the truth for the first time.

“The lying starts out to actually be a very good thing in her work life. But when the lying moves more and more into her private life, eating her up somehow, it becomes a mess,” Fick says. “When my wife and I were in this fertility process, I would have loved a little white lie once in a while. Hope was running out and we became so filled with frustration and fear that it would never happen, because the mental part and physical part of fertility treatment are a combined thing. Not to [criticise] the doctors, but I would say, ‘Please lie.’ You need to hold on to the hope, and that can be very difficult when the pregnancy doesn’t arrive.”

Feifer and Fick developed the series alongside producer Lauridsen. With Feifer as head writer, they then worked with two-episode writers to help pen the scripts, before Fick took on the role of conceptual director, while Feifer also directed.

“We have very much the same tastes but we also have very different skills in the actual production,” Fick says. “That is actually a beautiful combination, that we have a different focus in terms of working but we have the same tastes. It’s been a wonderful process collaboration-wise. We’re hoping to continue [this partnership] for our next projects.”

The main challenge in the writers room was combining Nana’s arc with the numerous patients she would meet in each episode and ensuring those subplots didn’t feel like they blocked or were surplus to the main story. “So every time she’s got a patient, there’s a little part of it that has got to do with her own feelings and where she is [in the story],” Feifer says. “If a patient says, ‘I’m not really sure I’m up for this, I’m so insecure,’ then [Nana says something like], ‘Well, you’ll be a great mum.’ She lies but she really talks about her own emotions.”

The creators also discussed at length whether Nana’s flaws and actions might make her an unsympathetic protagonist. “In her vulnerability, you can forgive the fact she keeps lying and keeps fucking up in different variations,” says Feifer. “But it was, of course, important to keep rooting for her. A cornerstone of that has been that although people have jealousy and all kinds of flaws, they’re still people, and Josephine Park depicts Nana as both very likeable and vulnerable and as a person who makes mistakes.”

“If someone could have told me more times in my life that even though you fuck up, people love you, it would have been a nice thing to feel,” Fick notes. “A huge thing among younger people is that you have to be perfect. You have to perform. You have to be totally on the right page morally all the time. Telling a story where you love a flawed character who does some pretty fucked-up things is an important message to send.”

When it came to filming, it was important for Fick and Feifer to ensure Skruk had an authentic Copenhagen vibe, reflecting the city where it was shot. They also wanted to elevate the show’s colour palette beyond the sterile white surroundings often associated with hospital-set dramas, while the directors used more handheld cameras as Nana’s state of mind becomes increasingly unbalanced through the series.

To make it more than just a medical show, the series also introduces Nana’s mother (Tammi Øst), a famous singer, while Nana and her best friend and co-worker Simone (Olivia Joof Lewerissa) can often be found deep in discussion during a game of bowling – a shared love of the show’s creators.

“When we wrote the script, we had all these bowling scenes and our line producer sometimes came to us and said, ‘You know, maybe we could cut down on that. Couldn’t they go for a cup of coffee?’” says Feifer. “No, we needed the bowling. We needed to see them eating the bacon snacks and we needed to see them drinking these giant beers. It was important.”

“But it was also important to make a show that had some authenticity in its characters,” Fick adds. “Then we have this ex-boyfriend, the love interest from the past, and in every scene he was in, there’s an element of water. He’s always represented in blue.

“We tried to make these different, concealed environments around each character for visual variation. It was important for us to try to connect what Nana’s capable of as a doctor with what she’s not capable of in her private life. Therefore, she’s living in an apartment that isn’t decorated and she’s never making dinner for herself, she’s just eating cereal. It’s about those small details. She lives by the water but she’s never looking at the water. She’s only in touch with the water when she’s in touch with [her ex].”

The creators are now awaiting word on whether Skruk will return for a second season, which would continue to focus on Nana and the world of fertility treatment – one that is recognisable to an increasing number of people.

“It feels extremely important to both of us to be a part of this conversation about reproduction and fertility treatment,” Fick says. “Our biggest hopes and dreams are to get the opportunity to make a second season, because we are so not done with this character. It would just be a dream come true.”