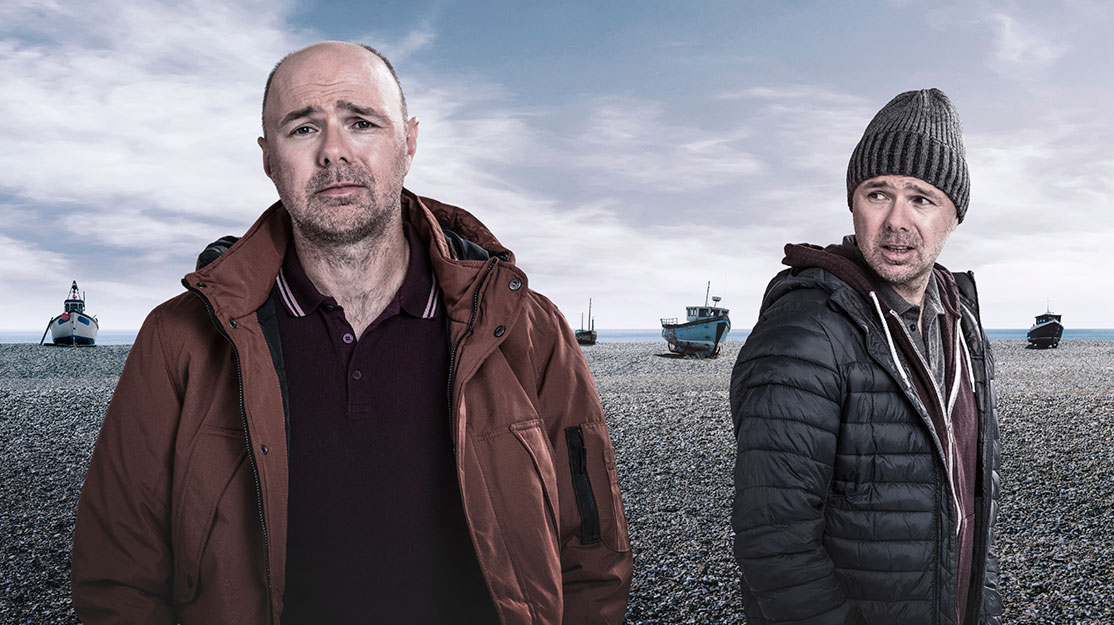 Karl Pilkington co-created, co-wrote and stars in his first comedy drama, Sick of It, in which he plays a version of himself whose closest friend is his uncensored alter ego. He and director Richard Yee, Pilkington’s fellow co-writer and co-creator, reveal all to DQ.

From breakout radio star to reluctant global traveller, Karl Pilkington has built a reputation for his gloomy personality, straight-talking manner and self-deprecating sense of humour. A former radio producer, he rose to fame with appearances on podcast The Ricky Gervais Show with comedy stars Gervais and Stephen Merchant, before going solo with unscripted travel series An Idiot Abroad and The Moaning of Life.

Now after an acting role alongside Gervais in the The Office creator’s Channel 4 series Derek, Pilkington stars in his first comedy drama, Sick of It, which he also co-wrote and co-created.

Melancholic, sweet and emotional, the six-part series sees Pilkington play Karl, a crotchety cabbie who’s living with his aunt while trying to get over his split from his long-term girlfriend. However, his closest friend is his alter ego, known as ‘the inner self,’ an uncensored version of Karl who appears only to him and can say exactly what he thinks – giving advice that often lands Karl in trouble.

From the team behind An Idiot Abroad and The Moaning of Life, Sick of It is produced by Me+You Productions and Alrite Productions. The series, distributed by BBC Studios, launches in the UK tomorrow on Sky1 and Now TV.

DQ met Pilkington and co-creator, co-writer and director Richard Yee to talk about the star’s move into scripted television, his thoughts on acting and why viewers shouldn’t come to the series with any expectations.

Karl, it’s very interesting to see you in a scripted series and acting twice, coming from a non-acting background.
Pilkington: I’m not good at knowing how I feel about things until after, but I think it’s good. I know I tried my best, I know that much, and I know it looks good and the music’s good in it. I think the stories are not just knockabout stuff. We’re not going for laughs. It’s got a bit of weight to it.

How much of you is in the Karl we see on screen?
Pilkington: It’s me, doing the acting thing. I sound like myself and I look like myself. So I’m not really pushing myself – but that’s the point. As much as it’s not based on any true story, it’s still based on me and what my world could have been, in a way. Nothing happens in there where I would say, ‘That’s ridiculous, that would never happen.’ It’s all, ‘I’d do that, I’d say that.’

Is it true you weren’t going to be in it at the start?
Pilkington: In the early days, yes. But [to Yee] did you always know I’d be in it at the beginning?
Yee: I didn’t know you were going to be in it twice. I thought you’d be in it, but I just thought it was going to be a process. Karl doesn’t ever really want to make TV.
Pilkington: I do but it’s got to be right and I’ve got to get my head around the idea. I’ve got to be comfortable, and that took quite a long time. So when we were knocking around with ideas and stuff early on, I wasn’t saying, ‘This is me.’
Yee: It had to be a process of just getting used to the idea. Once Karl got more comfortable with it, it was like, ‘OK I’ll be in it,’ and then, ‘Alright, I’ll be the main character.’ Then you ended up in it twice.

Are comedies risky at the moment because social media users can be quick to criticise a show after just a few minutes?
Pilkington: I’m not a one-liner person. I’m not a comedian. If people are expecting that, it’s a little bit odd. It’s like, why’ve you got that in your head? I’ve never done that. So why are you expecting that from me? With the podcast and stuff, it’s been about stories. I like stories. That’s what this is. I keep saying to people, it’s just six little short, simple stories that go off in different directions.

Is there a story arc we see through the six episodes, following Karl’s breakup from his girlfriend in episode one, or are they largely standalone stories?
Pilkington: There’s a little one. They are mainly individual stories. It’s a series where people will say they like episode two and five, or three and six. They’re that different. It’s not just like, ‘Yeah we’ve made one, that’s how it works so let’s just copy and paste that.’

How did you find the writing process?
Pilkington: It was such a new way of working. I was going, ‘I can’t stand this.’ It’s like you’d be sat in an office for a full day and you’d be thinking, ‘This is rubbish.’ Then just before you go, you think, ‘What if?’ and then you get a little idea you can start on the next day. It’s really weird. It’s not like any other job where you’re painting a wall, you know what you’ve got to do and there’s an end to it; where you put the second coat on, step back and say, ‘It’s done.’ This is never done.

Was it all scripted or was there any improvisation?
Pilkington: I’d change thoughts or things that don’t affect the story. If I thought something was better than what’s in the script, I would change it, and that was happening up until they said ‘action.’ It was a nightmare. I remember someone saying the crew all place bets on how many times the script’s going to change. It was eight weeks of that, tweaking all the time. I did like that pressure, and hopefully people will like it and it’s all been worthwhile.
Yee: Sometimes we think people are expecting a knockabout comedy. That’s our worry, that they’re expecting that. This isn’t like that.
Pilkington: Nothing ever has been, but for some reason – maybe it was working with Ricky and Steve [Merchant] so by association – I am [a comedian] as well. But it’s like, ‘No, never have been.’ That’s why it works, because they’re the funny ones and I just tell a story and they jump on it. That’s been the most frustrating thing with this. I worry about people who could enjoy it not enjoying it because they’re not in the right frame of mind. People are expecting something else and because it won’t be what they wanted, they won’t like it. It’s like a rebrand almost, trying to get people to try something different. But in a way, it doesn’t help that I’m called Karl in it and that I sound like myself. It’s difficult.

Richard, how did you find the balance between writing and directing?
Yee: It was easier to direct because I knew Karl and when we were writing in the room, we would act out the scenes together. It’s hard with a crew of 60, but it was about getting Karl to not think he’s acting and to just be himself and be in the moment. The challenge was making the two Karls feel real and natural. It was tricky because it’s actually quite a high concept, and it was a longer schedule because you have to film a lot of the scenes twice. The first week was probably quite scary for both of us.

Do we see Ricky and Stephen in any cameos? Or is it nice to have your own show?
Pilkington: We’ve done everything together so if they even cropped up in a cameo, people would say, ‘Oh they’re going back to what they did.’ It could never be that. It wouldn’t work. Ricky’s a comedy actor and people know the relationship we have with each other. It would be weird.
Yee: When we decided Karl would play Karl, we could have set it today, post-Idiot Abroad and post-Moaning of Life, but it would have been wrong if Karl was played as a known TV figure. What people like about him is he’s more of an everyman; he’s really relatable and authentic.

Are you planning a second season or more scripted projects together?
Pilkington: If this goes alright and Sky are up for it, we could do it. There’s loads of places you could take it. But other than that, I don’t look far ahead. When I was doing Idiot Abroad, it was never like, ‘So, Richard, if I do this for a bit, can I write something?’ That was never the thing. I fell into that by accident, that happened, it went alright, better than I thought, then I had the chance to do Moaning of Life. I did a few books I never thought I would do. This is just another thing I’ve had a go at and enjoyed doing, but I do think there are legs in this because once that idea of inner self has been established, there’s a lot of things in the first season where you don’t try and do too much with it. But I think you could start to get quite clever with it. We could do that – who knows?

tagged in: Karl Pilkington, Richard Yee, Sick of It, Sky1