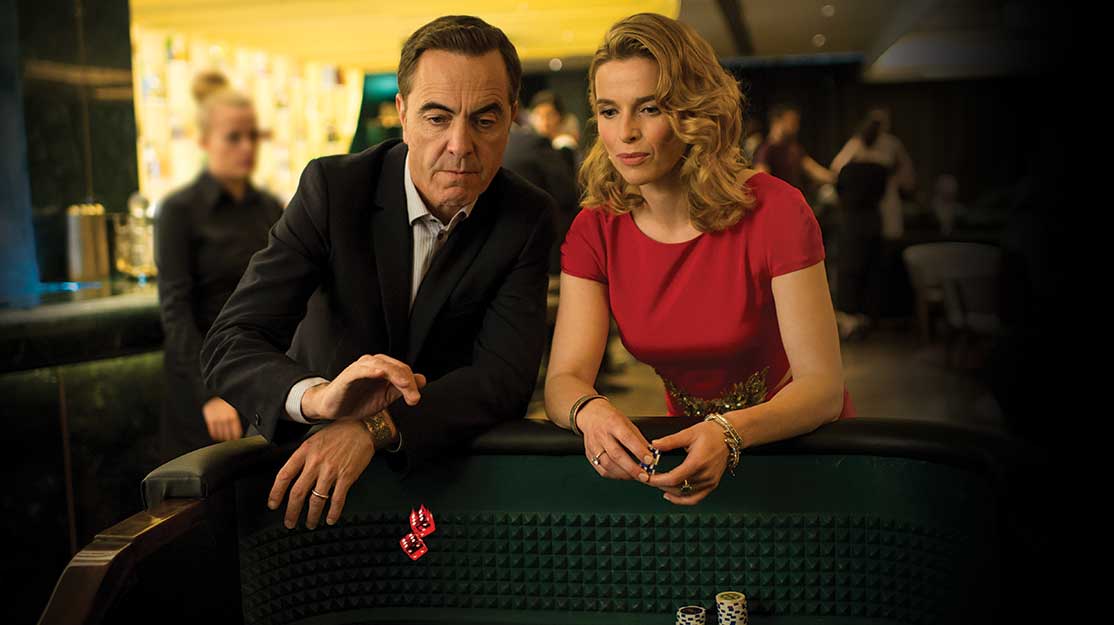 James Nesbitt is reunited with his enchanted bracelet in the second season of Stan Lee’s Lucky Man. DQ chats to the cast and production team on set in East London.

The offices of the Murder Investigation Squad (MIS) have a panoramic viewpoint overlooking the River Thames, offering sights of some of London’s best-known landmarks.

Yet on the police station set of Stan Lee’s Lucky Man, this impressive vista is revealed to be an illuminated backdrop. Elsewhere, banks of computer screens stand in front of a backlit map of the city, surrounded by bare-concrete walls and pillars that complement the grey steel desks and filing cabinets that complete the Bethnal Green set’s industrial look.

The series, which first launched on the UK’s Sky1 in January 2016, is back for a second season after becoming the pay TV network’s highest-rated original drama series ever, attracting an average audience of 1.9 million.

Viewers followed the fortunes of Detective Inspector Harry Clayton (James Nesbitt), who acquires an ancient bracelet that makes him incredibly lucky. Now the stakes are set to rise higher as he discovers the existence of a second bracelet.

The new 10-part season, launching tomorrow, also takes on a new structure, shifting from the serialised storyline of season one and picking up a story-of-the-week format as DI Clayton becomes embroiled in new cases in each episode.

“If the first season was about getting the bracelet, understanding what it is, believing in it and realising the power of it, the second season is about what Harry does with it,” explains exec producer Richard Fell. “He’s confronted by the possibilities of what it might or might not do when he meets the mysterious Isabella, who has had a bracelet for 10 years. This means Harry has to make some decisions about what he’s going to do now he’s accepted he has a lucky bracelet and how powerful it really is. And, in that classic Stan Lee way, is it a curse, a blessing or both – and how do you balance it out?”

Fell describes Lucky Man as “a little bit of crime drama, a little bit of high-concept superhero drama and definitely an action show.” But underneath it all is a very British drama, he says, with the lead character pitched as a flawed hero who often walks far too close to the line. “A British show doing a British version of The Flash or even Spider-Man would grate slightly,” he admits. “Harry is definitely a very British hero.”

Madonna Baptiste, who joined Lucky Man as producer for season two, feels many ingredients contributed to the show’s successful debut run. “It was fun, entertaining, had a great cast and great crimes,” she says. “It was a nice mix but ultimately it was great entertainment, plus it had the appeal of Stan Lee so it felt a little bit global. It was ambitious and it was a great Sky1 show. That’s what I loved about it. It was something I hadn’t seen before.”

Back on set during repeated takes of an interrogation scene for episode seven, Nesbitt is asked to kick over the same chair several times as Lily-Anne Lau (a returning Jing Lusi) gets the better of Clayton and his partner DS Suri Chohan (Amara Karan).

Chatting between takes, Nesbitt says: “I wasn’t sure where season two would go or how the character would develop but they’ve done a great job.” Wrapped in a knee-length coat to guard against the biting cold temperatures on set, Karan adds: “There’s a great cast and there’s lots of group scenes so everyone’s involved all the time.”

The actor, who is now a huge star thanks to her turn as lawyer Chandra Kapoor in HBO miniseries The Night Of, also teased that there will be lots of surprises for her character as season two plays out. “It’s an amazing script and there’s lots of action,” she adds. “I’m getting physical this season and even get to fire a gun!”

Fell describes the series as “entertaining, bold and fun,” with the “brilliant” Nesbitt at its heart. “He’s the kind of actor who can convey what is quite a wild idea – a lucky bracelet that actually works – and give it heart so it doesn’t feel too silly,” he says. “There are moments where he brings it back to Earth. It’s a combination of those things. It’s great Friday night telly, it’s really fun. And it looks good, it’s got a lot of energy.” 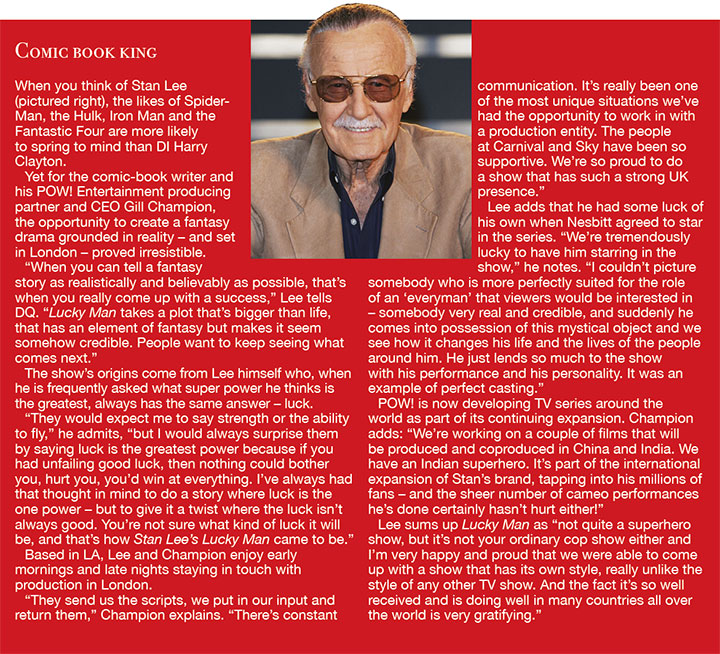 Baptiste adds of the show’s star: “James just knows the character and the character’s voice. For me, that was helpful because you would send him the script and he would say, ‘I don’t think the line is right.’ He’s an absolute professional and everybody loves him. He brings the fun and he’s just entertaining. You love to watch him and that energy transfers to the set. But he does long hours, he’s constantly filming. He’s in 90% of the scenes. It’s challenging for him but I have never seen him grumpy. He’s always enthusiastic.”

For Lusi, whose casino owner Lau once again goes head-to-head with Clayton, returning to film season two felt like she had never been away. “I hope her return is unexpected,” she says of her character. “One of my favourite things about Lily-Anne is that she is unpredictable, so I hope the viewers don’t see her coming. With regards to what to expect, let’s just say she hasn’t exactly seen the error of her ways from season one. Her wardrobe still rocks though!”

Lusi, who has also appeared in crime dramas Scott & Bailey and Law & Order: UK, says the show’s premise perfectly blends elements of both detective and superhero series. “I really like the style of the show – the slickness, gloss and pace,” she adds. “It’s different to a lot of other British shows and Lucky Man is quite daring in that respect. The creatives made a unique and complex world that the actors revelled in bringing to life, and every day we laughed a lot. It’s important to have fun, no matter what you do, and fun we certainly had.”

The actor reveals she was more relaxed during filming this time around than she was for season one thanks to her chemistry with Nesbitt and Karan. “I knew that if anything went wrong, we would just laugh it off and carry on,” she explains. “The worst thing you can do on set is to pressure yourself. There’s enough pressure as it is, you don’t need to add to that.”

The producers faced entirely different pressures, however, as the show’s unique challenges included filming in multiple locations across London, and capturing stunts and explosions. The season opens with a dramatic car chase around the skyscrapers of Canary Wharf in the City of London.

Baptiste says: “We’ve done lots of falls from high buildings and fight sequences and they’ve all been fairly big and ambitious. They’ve all been quite brilliant. We did want to have a stunt on Tower Bridge but there’s a thing about bridges and people diving off them – you’re not allowed to do that sort of thing. The writers will create something huge and we try to make it manageable. We go as big as we can.”

Locations are also key to the show’s identity, with the creative team very consciously presenting postcard London and all its iconic landmarks. “The shows I really like are those that are sunk into the place where they’re filmed,” Fell says. “London is a character and it’s exciting. It’s got dark bits and light bits and it’s vibrant, amazing, diverse and full of energy. We wanted the show to have that look and feel. It’s a very different London [to that presented in other shows], purposefully. It is a bit of a love poem to the city. Everyone who’s worked on it has lived here for years and loves it and wants it to look good.”

“We did a bunch of shots on the Millennium Bridge and Jimmy [Nesbitt] and Thekla [Reuten, who plays Isabella] were trying to act a scene and there’s tourists coming in and having their pictures taken. For them to maintain their confidence and focus among that chaos is testament to how good they are. That’s probably the most challenging part about this show because we want to be right in it, in the middle of London.”

With filming completed in December, Baptiste recognises season one as a tough act to follow and hopes fans won’t be disappointed when the show returns. “We just want to build on that and give the fans a little bit more – but give them what they loved about the series too. There’s something very British about Lucky Man but American shows broaden our horizons and it ups everyone’s game. Lucky Man rises to that challenge very well.”