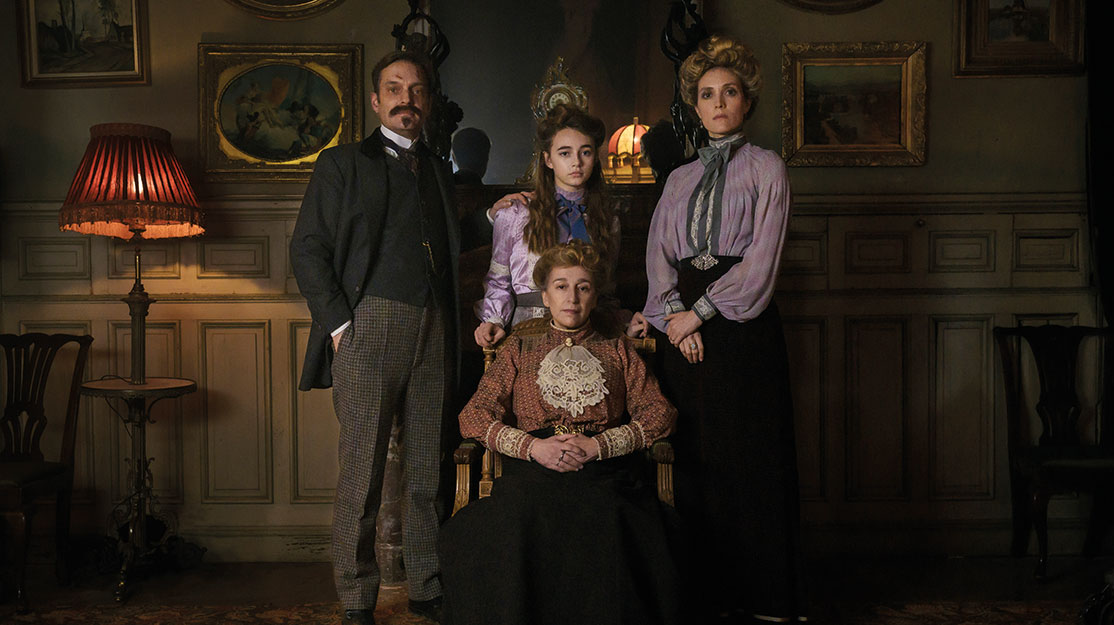 Anaïs Romand, costume designer on French period drama Paris Police 1900 and now its sequel Paris Police 1905, reveals the secrets of her job, from creating a character’s sense of style to the importance of good material.

Prolific in the film business, Romand has recently moved into TV, first with four-part time-twisting miniseries Il était une seconde fois (Twice Upon a Time) and then with crime drama Paris Police 1900. The latter, a period noir series for Canal+, follows a young detective striving to solve the riddle behind a headless torso found in a suitcase floating down the Seine.

Here, Romand tells DQ about creating the costumes for the show and her work on its upcoming sequel, Paris Police 1905, in which an unidentified body leads to an investigation that throws up a whirlwind of vice, corruption and blackmail that will unearth people’s darkest secrets. The series is produced by Tetra Media Fiction and AFPI and distributed internationally by StudioCanal.

How would you describe the types of projects you like to work on?
There must be a good script with interesting characters and a frame that I can visualise after discussions with the filmmaker. That can be any kind of project.

How do you approach each new job?
I carefully read the script over and over, and if the intentions of the filmmaker are clear and inspiring and images come rather easily, I can visualise the inhabitants of the story. Then I unfold the life of each character and imagine what kinds of clothes they have in their wardrobe, what their tastes are, their habits and their social background. When I’m familiar with them, I try to fit them into the story and decide what’s appropriate for the situations they’ll go through.

What interested you about working on Paris Police 1900?
Fabien Nury, the writer, and Julien Despaux, the director, were not afraid to really deal with the turn of the century, with its cruelty and splendour, the glorious appearance and the miserable hidden vices – far from the false and idyllic image of the Belle Epoque.

How would you describe the fashion of the period?
The way someone dresses in 1900, as for all past periods, represents accurately who they are and what role they have in society, so each social class has its fashion. Of course, we know much more about the fashion of upper-class people through paintings, photography and the splendid haute couture clothes that are now in museums, but the working class followed the fashion too, depending on their occupation.
Roughly, a corset, petticoat and long dress buttoned up to the neck formed the clothing for women, and all the quality details of the fabrics, the laces, the ornaments and the accessories made it possible to characterise at first glance whether the woman was a worker, a prostitute or a member of the bourgeoisie. It was the same for men in terms of the quality of the tailoring, the fabrics and the accessories marking them out.

How did you decide how to dress the key characters?
By following the script and the situations. For example, Meg, the main female character, played by Evelyn Brochu, is an ambiguous, manipulative and endearing person. I had to find shapes and colours that could make her sexy or innocent, depending on the scene. She is a character full of contradictions, so she had a wide wardrobe to respond to a great variety of scenes.

You’re now working on Paris Police 1905. How did fashion change in the intervening years?
It didn’t change much. There are some small details, but the main line is the same. The big difference this season is that it’s all set in winter.
There are winter coats, furs and new hats – all the main characters have different outfits. Adolphe, Meg’s husband, has changed a lot, so he has new clothing, and Meg is like a princess looked down upon in her house.

Tell us about the team you work with.
There are two main teams. The first is the one making the costumes, with tailors and seamstresses, made up of people including Anne Versel and François Siméon. I have enjoyed working with them for years and they have a perfect understanding of how to find the lines for the characters I design, and beautiful taste for well-made details.
Then there’s my wonderful team on set, which is perfectly organised thanks to Anne-Cécile Le Quéré, my assistant. It’s a team that loves creating characters, fitting each extra with so much care, which contributes to the beauty of the series. There is life in each shot because we take the time during fittings to give meaning to the costumes in accordance with the personality of each character. We were wonderfully supported in this by the make-up from Laure Talazac and her team. The hairstyles were also so important in 1900, created by Sandrine Masson and her team. What a pleasure to work with them all.

How do you also work with the producers and actors before and during production?
Before shooting, I share sketches, documentation, colours and samples, but the most important part is always the fitting. That’s when the actors and I work together to visually build something they can live in and believe in for their character. Costume fittings are important for actors. You have to make your body understand how you move with a cane or a hat, how to hold your gloves, how to be at ease with a corset or how to walk naturally with a long skirt. And of course, there are constant discussions with the producers about cost. You always have to find the best solution for quality and quantity.

What is your process, from initial sketches to being on set?
Finding the right materials and colours is essential. After sketches, it’s the most important part. When I have settled on the range of colours, the types of characters and their social backgrounds, and established the needs in terms of extras, I go to a large fabric store where I can find all the materials I’ll need to make the costumes. When I start making the costumes, I don’t have the full scripts, just the main lines, so sometimes there is very little time to make the right costume required for a precise scene – so I need to have everything at my disposal.

How do you find your costumes and how many do you make from scratch?
Around 40 costumes were created for the main characters for the 1905 season. There were also 80 new costumes for bourgeois women in winter, while I could reuse about 300 that had been made new for the crowds for 1900, because the fashion didn’t change that much. For men, policemen and working-class people, about 100 costumes were hired, with many furs and coats for the extras, while around 80 new hats were made.

What challenges have you faced while working on the series?
Making things look lively, not static like a pretty display of period costumes, is always the main challenge with a period piece. In a way, you have to forget the costume and just see the character. The other challenges are the usual ones: time and money.