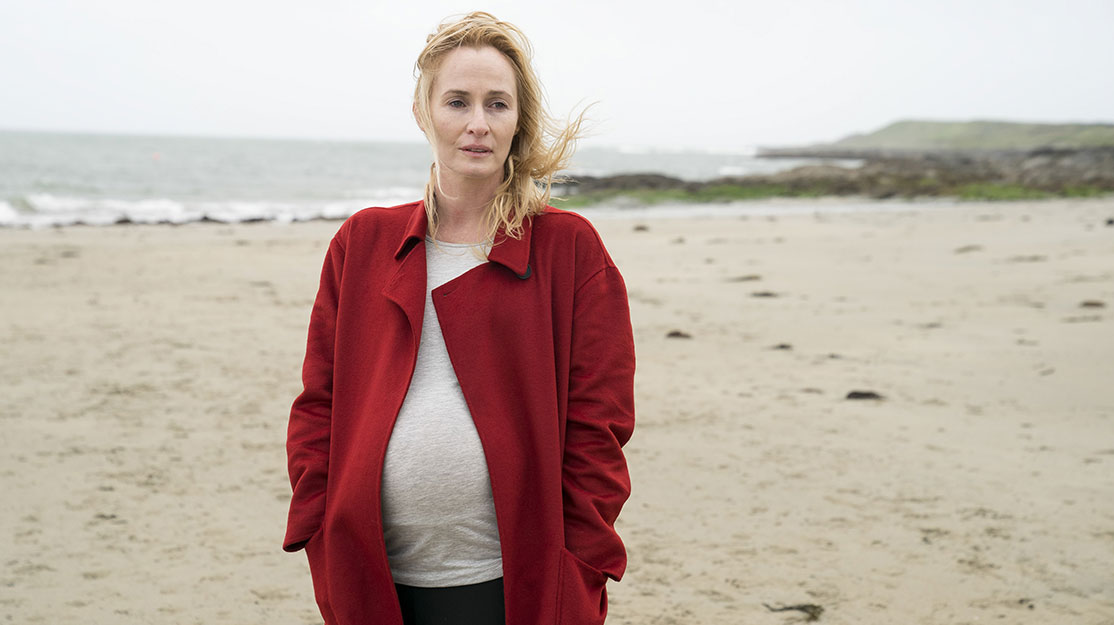 More than 50 years ago, the Abortion Act of 1967 legalised abortion across the UK. Yet the change in law did not extend to one part of the union, Northern Ireland, where in the vast majority of cases it remained a criminal offence to have or perform an abortion.

Women would often travel across the Irish Sea to England to seek abortion services they could not access at home, and that remained the case until 2019 when the government in Westminster controversially imposed changes to the law while Northern Ireland’s Stormont Assembly was suspended.

Against the backdrop of the restrictive law and the campaign to overturn it, BBC two-part drama Three Families explores how three women come up against legislation that dated back to 1861, while exploring both pro-life and pro-choice arguments surrounding abortion.

Theresa (Sinéad Keenan) faces prison for trying to help her teenage daughter have an abortion, while young newlyweds Hannah (Amy James-Kelly) and Jonathan (Colin Morgan) learn that their first child will die of a fatal foetal abnormality. Older first-time mother Rosie (Genevieve O’Reilly) also discovers complications with her pregnancy, and faces a lack of legal solutions.

“Being in England, I wasn’t aware of what was going on. Until the law changed and it was all in the news, I just naively assumed the law in Northern Ireland was the same as in England,” director Alex Kalymnios (Titans, The 100) tells DQ. “Part of the reason why I was compelled to tell this story is because if I didn’t really know what was going on, there would be other women too, and men [who didn’t know], and I felt it was really important to share these true stories of these women going through hell because of this ridiculously restrictive law.”

Produced by Studio Lambert, the company behind award-winning, fact-based drama Three Girls, the show has been penned by screenwriter Gwyneth Hughes (Honour, Vanity Fair), who based the stories featured in Three Families on real-life cases, changing names and details to protect the privacy of those involved. Behind the camera, Kalymnios partnered with cinematographer Ula Pontikos (Russian Doll, Marcella) to bring these highly emotive stories to the screen. Keen to avoid turning Three Families into a social realism drama, they use the space between documentary and fiction to bring honesty to the portrayal of the families at the centre of the story.

“What one must mention about this story is the shame that’s associated with abortion,” the director says. “One of our stories, Theresa, is based on a real case, which in a way is almost like a witness-protection case. We had to elaborate and change some of the family details because they don’t want to be recognised. Even to this day, they don’t want any recognition because no one knows who they are. What’s really important is that, with drama, you can tap into the truth and emotion without necessarily exposing people.

“What I love about Gwyneth’s script is she still nails down the true moments. And what I love as a director is to be able to find those moments and expand them with the actors, the cinematography, the locations and production design to really emphasise what we’re trying to get across. I didn’t want it to feel like it could have been a documentary. I wanted it to feel considered, elegant and cinematic.”

Key to the look of the series was Northern Ireland itself. Kalymnios and Pontikos were keen to showcase Belfast with plenty of colour and to utilise coastal views to emphasise that these women were on an island where they were living with a century-old law.

“The script has a lot of empathy towards both sides of the story,” Pontikos notes. “There isn’t a right or wrong decision. You can’t really quantify whether somebody who doesn’t believe in abortion is wrong, and what Gwyneth managed to do and Alex emphasised through directing is show both sides of the story. It never bashes you with ideology. It just tells you about these women, who are going through difficult moments in their lives, and how they try to put it all together.”

During pre-production, the pair struck upon the idea of filming with anamorphic lenses to produce a widescreen effect, not just so it would look cinematic but also to allow the camera to frame the characters in an intimate way. In addition, they injected the series with a colour palette that one may not expect from the subject matter, while Pontikos wanted to light the series with as much sunlight as possible to build a connection between interior shots and exterior locations.

“Let me tell you about Belfast. It was my first time there and everyone says, ‘It’s going to rain,’” she recalls. “My friend does lots of photography in Ireland and she always finds this beautiful sun, so I said, ‘No, I think it’s a very sunny place.’ We were doing location recces and it was always sunny. But everyone was like, ‘Don’t worry, once we start shooting, it’s going to be raining.’ Lo and behold, we had sun the majority of the time.”

Locations were also key to representing the different socioeconomic statuses of the three central women, with Theresa considered working class and Rosie coming from a wealthier background.

“This law affected women from all parts of society. I didn’t matter what class you were, it still affected these women,” Kalymnios says. “That was really important and something we wanted to get across through the production design, location choices and, to a certain degree, with the colour palette. Hannah’s story was always the sunshine ,so we used lots of yellow and warm colours. Then Rosie had a much cooler look with her house and her clothes. Theresa had a lot more of a mixture.”

Set across six years, the series demanded a timeless quality that would highlight the juxtaposition of an old law with the modern women it affected. To achieve this, the creative team decided to use vintage Cooke Xtal lenses to avoid the crispness that comes with modern equipment.

“I remember doing the camera test and it just looked stunning. That’s the beauty of those lenses,” Kalymnios says. “When they hit the light, there’s a softness and magic to it. And when you have the lens flare, it’s just gorgeous. I wanted to lean into the beauty of these lives and the fact they are families. It’s not a cold family life. They’ve had to endure something that’s been awful, but they still try to find those moments of beauty along the way.”

“I just want to give a hands-up to Andy Gardener, our focus puller, because with those lenses, they can be very tricky and they’re not robust,” Pontikos adds. “He knew them very well and he made our life really easy.”

Kalymnios chose to shoot Three Families with a single camera, steering away from the two-camera approach used for most modern TV dramas. This was particularly necessary due to the compact nature of some of the locations, but it also meant the director had to build a comprehensive shot list to ensure she could get what she wanted without asking actors to repeat emotionally exhausting scenes more times than were necessary.

“We have three different stories and, because of the way we shot it, and also because of Covid and the locations, the characters didn’t really ever meet,” she explains. “It was almost like having three different shoots, and each actor had their own process. With Amy and Colin, we did a lot of improv on the day to get really into their relationship and feel the love and the joy, but there were some really tough scenes for all of them. You just needed to know what shots you were going to start with. We usually did the tight stuff first and worked our way out.”

As Rosie, O’Reilly was involved in a particularly emotional scene in which her character shops for baby clothes – one that meant there wasn’t a dry eye on set.

“The most important thing working with actors is to give them space so they feel secure,” Kalymnios says. “Each of the actors had their own personal reasons for taking on this project and they also knew the responsibility of trying to do these women justice. There was a lot of pressure on everyone, because everyone just wanted to do the story right. We did a little bit of rehearsals and readthrough leading up to it, but it was mainly about discussions and having that private time in between setups to talk about stuff.”

Filming began last September, making Three Girls one of the first dramas to start following the start of the Covid-19 pandemic. The 35-day shoot was then interrupted when a positive test result led to a short hiatus, causing some locations to be lost and new ones having to be sought before production wrapped in November. The drama launches tonight on BBC1, with the second part airing tomorrow.

“One of the weirdest things was wearing the masks, not because they were extremely uncomfortable or horrible, but because you can’t see someone’s mouth – and when you can’t communicate visually with a smile or an expression, it’s really hard,” Kalymnios notes. “That was one of the personal challenges shooting in a pandemic. We did get shut down but, in a way, it was great because it gave us all a beat just to reflect and look at the material, edit, see what we had, see if there was anything else we needed and give everyone a bit of a rest. But everyone wanted to be there and everyone appreciated how important the story was. And because people hadn’t worked for eight months, we were also very eager to work.”

Coming to Northern Ireland together from England, the director and Pontikos formed a bubble, and the Poland-born cinematographer says Three Families became more than just another job.

Similarly, Kalymnios praises the cast and crew for completing the series – distributed internationally by All3Media International – while filming in “unknown territory.”

“I’m really grateful Ula came on the journey with me and we managed to do it together,” she adds. “It was difficult at times, but it was incredible we got it done in a pandemic. I’m really proud of what we managed to achieve and thankful for everyone’s involvement.”