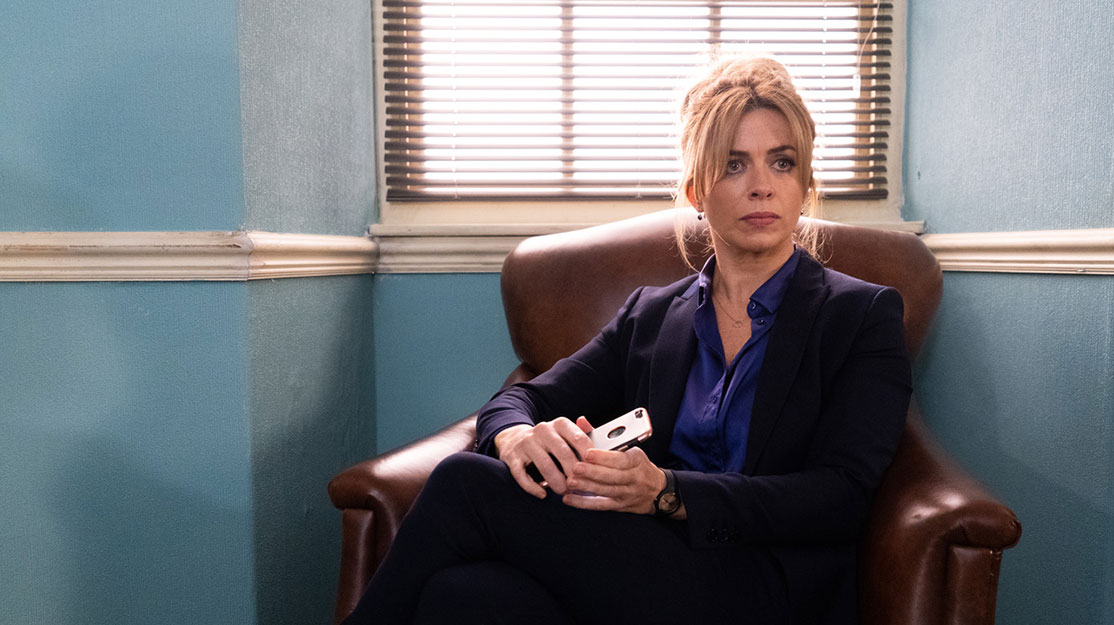 It was a show-stopping cliffhanger that left viewers desperately wanting to know more. After eight episodes of Un Bore Mercher (Keeping Faith) that had seen Faith Howells desperately searching for her missing husband, Evan, becoming involved with gangsters and losing custody of her children along the way, season one closed with the strong and resourceful lawyer embracing another man – only for Evan to suddenly reappear.

The series first aired on Welsh-language channel S4C in 2017, before it ran on BBC1 Wales, where it broke channel records with almost 300,000 viewers.

A second season, then, was perhaps an easy decision for co-commissioners S4C and BBC Wales, with new episodes beginning this Sunday on S4C (complete with English subtitles) before making the jump straight to BBC1 this summer. But rather than pick up exactly where season one finished, the new season jumps forward 18 months, with Faith (the returning Eve Myles) running around her kitchen with her three children watching on.

The story sees Faith attempt to pick up the pieces of her life and marriage, dealing with the return of Evan (played by Myles’ real-life husband Bradley Freegard) and a love triangle while also becoming embroiled in a murder trial. What’s clear is that while Faith’s iconic yellow raincoat is back, the woman viewers left in season one isn’t the same person we meet now.

“What we were interested in were the scars that you carry and how we’re all changed by lies and deceit – and how it changed Faith as a person, a woman, a wife, a mother and a lawyer,” says director, writer and producer Pip Broughton. “How had season one affected her moral centre and her domestic choices? What’s interesting is you see some things that are the same and some things that are shockingly different. It becomes more about survival, endurance and love.

“Because the key quality that I set out to achieve with the series was intimacy, we feel as though we are part of that family, part of this woman’s inner and private life. Making a series about intimacy for a second time is very liberating because everyone knows each other so well. All of them are fundamentally and permanently changed by the lies and the crisis of season one.”

Broughton, who produces the series under her Vox label, directed six of the first season’s eight episodes. She returns behind the camera for four of the second season’s six parts, two of which she also wrote, with creator and lead writer Matthew Hall penning the other four instalments.

Broughton and Hall first partnered with the ambition to create a drama with intimacy, a universal story and a strong female character at its centre – “Erin Brockovich in Wales.” They were also committed to setting it in Wales, where they both live and have raised their families. That close partnership has continued into season two, with the duo sharing story development and writing duties owing to the shorter 12-month timeframe they were given to get season two on air. By comparison, they spent five years working on season one.

“We’ve been very lucky in that we’ve got most of the crew back because we shoot it quite fast and we’ve got a particular way of working on the floor, which has been very influenced by my theatre background,” Broughton says. “It’s a very performance-based show; we don’t rehearse, so I’m shaping the performances on camera. I’ve lived with this series for so long that I feel very free to work in the moment with the actors, and the actors find it so liberating and empowering because we do it all in the moment.

“People say it has a freshness, a distinctiveness and a realness that viewers fell in love with, so we’re humbly doing another season and not changing anything and keeping the spirit of the first season.”

Central to the success of season one was Myles’ raw, powerful and emotion-filled performance as Faith. Broughton and Myles (Victoria, Broadchurch) were friends before the series and had sought a project to do together. The fact that project ended up being Keeping Faith meant Myles had to learn Welsh, with the show filmed back-to-back in Welsh and English to produce bilingual versions that are sold internationally by APC Studios.

“There’s nothing I cannot throw at her,” Broughton says of working with the actor, whose performance she describes as magnetic, riveting and brave. “She’s courageous; she’s genuinely fearless. When you find a creative colleague with the same sensibility, you get a special magic on set and it rubs off on everybody else. She’s not afraid of looking ugly or of finding the darkness within herself. It’s a joy working together, it’s not a job.”

Season two will bear a dramatically different visual style, however, not just because of the wounds being carried by many of the characters but also because it was filmed last winter, in contrast to the summer shoot for the first season.

“It really was dark and cold,” Broughton says. “I loved the blue skies and the light of season one, but we accepted the circumstances and tried to make it an advantage. We used the bare trees and brooding skies because it’s quite a spontaneous way of working, going with what you’ve got. And if there’s rain, you put the characters in the car and it’s all about claustrophobia, so there’s a lot of spontaneity on the day.”

For S4C, Keeping Faith was notable for being a crime drama that wasn’t overly dark or mysterious and which had a warm, loving lead character who wasn’t afraid to express herself.

“It was really successful for us and the audience really responded to it,” says the broadcaster’s drama commissioner Gwawr Martha Lloyd. “It stood out in our schedule as something that was different but super compelling – that ‘what if’ scenario really appealed. And for the Welsh audience, it’s set in an area we don’t often go to, which is Carmarthenshire, so it also looked very different and the colours and the way it was shot were very different from other shows. There was a certain warmth to the series that appealed.”

Season two, she says, does feel different, as Faith comes to terms with the effects of events so far in the series and faces up to a host of new challenges.

“She is having to juggle a lot of different things at the moment – her family, the aftermath of all the things with the gangsters and the main thing, which is the return of Evan, plus a murder case,” Lloyd explains. “She’s got a lot going on and she’s battling on and being really strong, but she’s very different from the person she was in the first season. The way they filmed it and the visual language really helps deliver that message. The most important thing is that when you had a cliffhanger like you had in season one, you deliver on that in season two, and I think they really have.”

The popularity of the series ahead of its return to S4C means talk has already turned to a potential third season. “These characters can run and run,” Broughton adds. “With season two, we found, strangely, that there’s more story than we expected. You could take Faith anywhere and it would be interesting.”