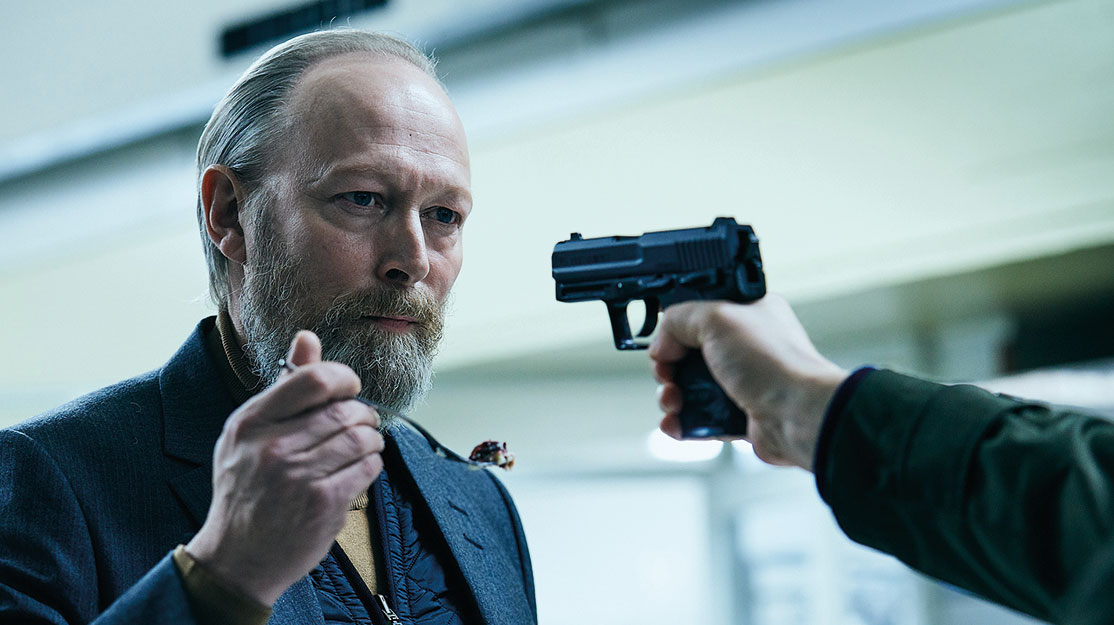 A father’s desperate attempt to uncover the truth about his daughter’s death takes Danish drama Forhøret (Face to Face) beyond the traditional Nordic noir tropes.

It might seem hard to imagine how shooting intense scenes in a small room as one character interrogates the other about the possible murder of his daughter could ever be funny. But as director Christoffer Boe says, Forhøret (Face to Face) isn’t your standard Nordic crime drama

The Danish director has teamed up again with executive producer Jonas Allen of Miso Film to create a show they promise will blow the lid off not only the Nordic noir genre as we know it, but also crime drama in general. The duo previously worked on the critically acclaimed scripted drama Kriger (Warrior), Boe’s first foray into TV after a celebrated career in filmmaking.

Going beyond the basic whodunnit premise of many crime dramas, the Copenhagen-set series sees police officer Bjørn (Ulrich Thomsen) not only investigate his daughter’s death but also question his reality and what kind of man he was to his daughter and ex-wife.

Distributed by Fremantle, the eight-parter opens with Bjørn going to the coroner with a dental card to identify a young woman. But he is left reeling when he discovers it’s his own daughter lying on the autopsy table. Her death is recorded as suicide, but Bjørn believes otherwise and begins to look into her life. His investigation sends him on a whirlwind journey through the city’s underbelly, where he encounters a variety of characters who meant something to his daughter and uncovers a tangled web of truths, lies and criminality.

So far, so noir – but don’t refer to it as such in front of Boe, who bristles at the suggestion, even though Nordic noir dramas such as Wallander and Forbrydelsen (The Killing) put the region on the global drama map.

Despite bucking industry trends with a running time of just four hours, Face to Face still manages to get under the skin of a city, unravel a family’s hidden secrets and paint a picture of a man coming to terms with his guilt as a parent and husband.

Boe wanted to keep the aesthetic very simple, believing that the naturalistic feel helps the show to get into Bjørn’s psyche. “I’ll be intrigued if people try to call this a Nordic noir crime series… it’s something you haven’t seen in a Nordic noir drama,” he says.

Face to Face provides no backstory or flashbacks, creating “a new stylistic structure, and it’s a strict structure,” says Boe, with each of the eight episodes centering on Bjørn’s interrogations of the people connected to his daughter. The filming process pushed all involved to their limits, often shooting up to 15 pages of dialogue a day, but Boe says there were many light-hearted moments.

For example, on one of the first days of production, a character was required to smoke a cigarette. “Nowadays, we have to use these safety cigarettes that don’t contain any nicotine but still produce smoke,” he says. “We noticed after a while that the actor’s voice began to sound a bit funny, and he admitted, ‘When I smoke these things, I sometimes lose my voice.’”

The actor did eventually lose his voice, but the show had to go on and he somehow managed to get through his 12 pages of dialogue. “You just have to laugh at the situation,” says Boe, who managed to find a silver lining: “His raspy voice gave something completely new to the character, so it ended up a good thing.”

And while the desire to make something unique put the cast and crew under pressure, Boe says a sense of levity on set was crucial: “We wanted to use all the tricks of the trade to try to make it interesting and dynamic, but it also needed to be playful. We needed the characters to have fun together so that it’s more than just an interrogation, it’s also developing the characters and their relationships.”

The pressure was intensified by the production’s quick turnaround, with just one week allocated to film each episode. As such, there was little room for error or any tweaking of scripts.

Working alongside Boe on those scripts was acclaimed playwright Jakob Weis (Fred til Lands), who jumped at the opportunity to join the project after being sought out by Miso Film’s Allen. Weis’s theatre background was critical to not only enhancing the concept, but also ensuring the dialogue felt as natural as possible.

“He was able to use his theatre background to write these long dialogues. To keep it dynamic and keep the characters fascinating, we really needed to have that kind of scriptwriter,” Allen says.

Boe adds: “Jakob told me, ‘If you can provide me with the crime elements, I can make it interesting, no problem.’”

“It’s intense and fun because it is something none of us had tried before, and I think the actors are trying something different too,” says Boe, who won the Camera d’Or at the 2003 Cannes Film Festival for his first feature, Reconstruction.

The director had Thomsen in mind for the lead from the outset. “Bjørn is particularly sculpted and made for Ulrich,” he says. “When you see what he does with that role, it’s so obvious we made the right choice.”

Meanwhile, having worked with Boe on Kriger, Allen immediately said yes to Face to Face, which Boe first pitched a few years ago and has been developing ever since. “The beauty of Face to Face was not only the story, but there was also the challenge for the director to innovate crime drama, which was fascinating and gripping,” Allen says.

“There was this very strict portrayal of only one character, but we also wanted to reveal layers of his character, plus the daughter’s secret past and the layers of the investigation. These are not the same interrogation scenes you might see in a traditional detective show, but a dad interrogating suspicious people about his daughter’s death,” adds Allen, who founded Copenhagen-based Miso Film with Peter Bose in 2004.

“You have Thomsen going up against Lie Kaas and then, in another episode, Ulrich versus Lars. That is the power of the show.”