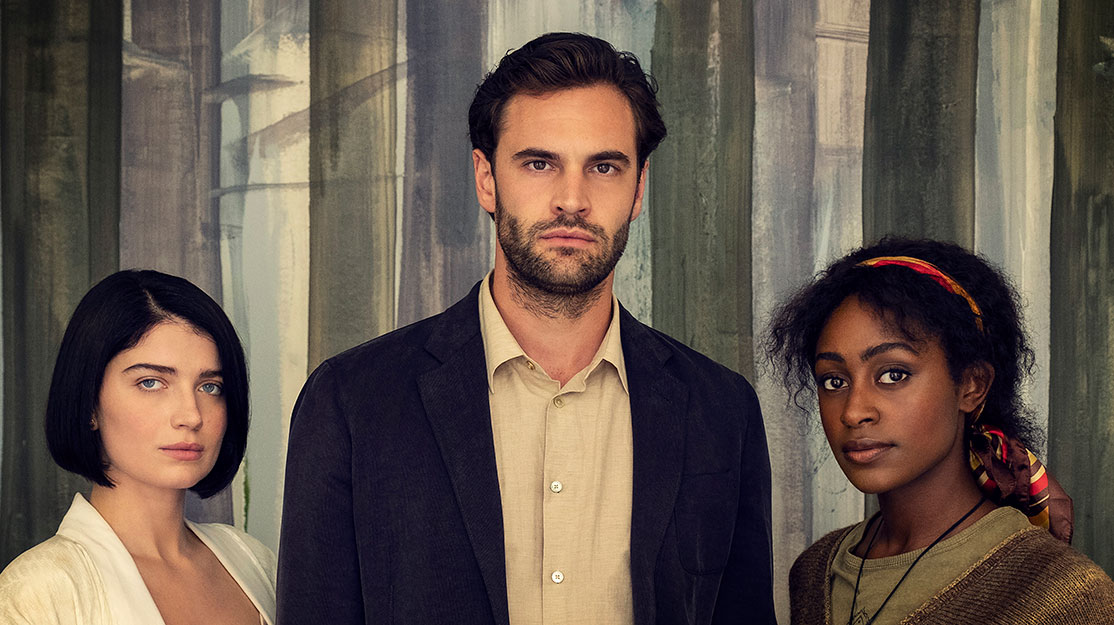 Steve Lightfoot, showrunner of Netflix’s British thriller Behind Her Eyes, takes DQ into this adaptation of Sarah Pinborough’s novel about a woman who becomes entangled in the secrets and lies between her boss and his wife.

Across a 15-year writing career in the UK and the US, Steve Lightfoot has worked on a wide range of shows, from crime series Criminal Justice and Inspector George Gently to thrillers Narcos and The Transporter. He’s also no stranger to adaptations, having worked on two seasons of NBC’s Hannibal and created Netflix’s comic book drama The Punisher.

“I’ve always been pretty eclectic,” he says. “I’m drawn to stories I like and, like a lot of us, I love everything from leave-your-brain-at-the-door action movies to art films. My writing taste is fairly similar. If there’s a story and characters I’m excited by, that’s the way in. I wrote for [long-running British hospital drama] Casualty back in the day, so I’ve run the gamut.”

The LA-based showrunner’s latest project reunites him with Netflix for another adaptation, this time bringing Sarah Pinborough’s 2017 thriller Behind Her Eyes to the small screen. The series stars Simona Brown as Louise, a single mother who has an affair with her psychiatrist boss David (Tom Bateman). Her life then takes a strange turn when she later befriends his wife Adele (Eve Hewson) and she finds herself caught in a web of secrets and lies where nothing is what it seems.

Lightfoot was introduced to the project after Left Bank had approached Netflix with a view to adapting the novel. Having recently worked with the writer on its Marvel Comics series The Punisher, the streamer suggested Lightfoot lead the show.

“I was just really taken with the book. It was a lot of fun,” he says. “It’s just a great yarn. I loved what Sarah had done and was quite excited about how to put it on screen.”

Lightfoot was particularly intrigued by the novel’s blend of romantic drama and psychological thriller, with added supernatural elements for good measure as single mother Louise, who is plagued by nightmares, gets drawn into the world of David and Adele, becoming entangled in the couple’s complicated relationship.

“At the heart of it, I just like Louise. I really like that person, and I actually thought it’s really interesting to have a working-class heroine who is complicated and messed up and all of those things,” he explains. “So often, the hero is the lawyer or the cop – they’re quite highbrow. I was really taken with Louise’s story. And even though the book gets dark in places, there’s a great irreverence to it. Sarah knew she was writing something that was fun; it’s not meant to be taken super seriously. At the end of the day, it’s just entertainment and that’s not a bad thing. That was actually really exciting.”

Lightfoot says the series is very faithful to the source material, which is broken up in to three parts, with each part of the novel making up two episodes of the show. However, the novel is told from two different first-person perspectives, revealing events from both Louise and Adele’s point of view, which meant Lightfoot and co-writer Angela LaManna had to find a way to externalise the story and visualise the characters’ thoughts.

“The challenge was how to take it out of the characters heads, which is very subjective. In the end, because of the camera, screen storytelling always has to be pretty objective,” he says. “So it was a question of how to move to that mode of storytelling and still keep all the surprises and all the engagement that was so good about the book.

“It’s very shocking in a lot of ways, and that was really fun to play in. There’s the Hitchcock thing about whether you know there’s a bomb under the table [to create a sense of suspense] or is it a shock – and you have to mix both of those things up. But it was all there in the book. I can take very little credit for it. Anything that’s clever and smart and great in this story was predominantly Sarah, and a lot of [the job] was just how to turn it into pictures.”

At the start of the series, Louise cuts a lonely figure as she juggles her job with being a single mum, leaving little time for love. When she meets the mysterious David on a rare night out, she is devastated to learn he is married – and he is her new boss. Putting their illicit meeting to one side, Louise then befriends Adele, unaware of the secrets she shares with her husband and of the power struggles between them. Through flashbacks, viewers also learn more about Adele’s past and her relationship with Rob (Aramayo), her best friend from the time they spent together at a psychiatric hospital.

“Louise is essentially having a love affair with both of them. One’s platonic with Adele and one’s romantic with David,” Lightfoot says. “So her allegiances and loyalties keep shifting. What I loved about it is it’s such a messy human situation, which is, ‘I want to be with him but actually I’m really good friends with his wife.’ And in the end, we put this supernatural thriller spin on it.

“It’s taking the idea that we can’t control our emotions. They drive us despite all logic and all common sense. That’s what was really interesting to me about the characters. Louise is a very good person who does some questionable things and then, in trying to put that right, gets herself in more and more trouble. She’s someone who always worries about other people’s happiness first, and finally there’s this moment where she decides to put herself first and it leads to all kinds of trouble.

“Against that, Adele looks very much like the victim of a controlling, abusive husband. But no one’s ever what they seem, and gradually we peel the layers back and you realise maybe she’s the one wielding the power there and he’s the victim, and those roles keep shifting. No one’s quite what they seem or who they seem.”

Unable to write all six episodes himself in the time available and also seeking a female perspective to the story, Lightfoot reunited with LaManna, with whom he had previously worked on Hannibal and The Punisher. He wrote four episodes, with LaManna picking up the other two.

“We spent a lot of time together with white boards just to make sure things happened in the right places,” he says of their writing process. “Invariably, we’d move things around and then realise Sarah had it right the first time around and we’d go back to the book. I wrote the first two, Angela wrote [episodes] three and four and I wrote the last two.”

Also presenting a writing challenge were the flashbacks that the showrunner says prove critical to the story and its mystery as it unfolds, with events in the past and the present colliding at the show’s conclusion.

“You realise you’ve been watching history repeating itself, which is the fun of it all,” he says. “The fun of the flashbacks is the audience doesn’t know everything, but the audience knows more than any one character. You’re watching people walking into danger and traps that you know are coming. The flashbacks help with that because you’re watching Louise and rooting for her but you know more than she does and you have been party to Adele’s past.”

As a British writer living and working in the US, Lightfoot has experience of working in both countries’ systems. While the showrunner model is becoming more common at home, he admits he “doesn’t love” the term, noting: “It’s me and 300 other people.” Showrunners are head writers and producers – a role that can bring huge creative control and authorship over the story, but which also means you are involved in meetings about costumes, set design, locations and numerous other departments.

“Once the script’s written, showrunning is all producing,” he says. “With this, I never actually came to the UK except for a few visits. We had a producer on the show, Eliza Mellor, and the guys at Left Bank, and they were very much the guardians of making it with Erik. I can’t speak highly enough of him because he was incredibly faithful to the script, and that’s not always the case.”

Strand spent time with Lightfoot in LA, working through the scripts once they were written so that, by the time filming began in the UK, they both agreed on the intent of each scene and the tone running through the series.

“Because I didn’t make any radical departures from the book, that became his department and he did that fantastically well,” he says. “I’d watch the dailies and they were great. The script was all there, so it was this very charmed production from my end. It was more in the UK model; I was hands on as a writer, but I wasn’t there showrunning-producing in the sense I would be over here in the US.”

As well as secrets and lies, the series also deals in contrasts, most notably between Louise’s council flat and the sleek, glossy and expensive home belonging to David and Adele. But despite this, Lightfoot says he was keen to avoid the “British default” whereby everything has to have an element of ‘kitchen sink’ realism.

“Yes, she lives in a council flat but it should still be somewhere we’d all like to live,” he says of Louise’s well-presented surroundings. “There was the idea of keeping the world a bit aspirational and slightly glossy, and not making the world somewhere you wouldn’t want to be. Everyone’s house is a little bigger than otherwise it would be and they live a little nicer. It’s something American shows do as a default much more [than in the UK], but I didn’t want to descend into that idea of ‘It’s got to feel like Ken Loach.’

“That was a conscious choice but, at the same time, it is a small flat. Erik really got that. We said it should be pleasing on the eye and it should be stylish, and have all those things so you’re always enjoying being in the show – even if it’s scaring you or it’s tough, it should be a guilty pleasure.”

Lightfoot is now adapting another novel, Gregory David Roberts’ epic Shantaram, for Apple TV+. Charlie Hunnam (Sons of Anarchy) stars as a man on the run from an Australian prison who finds a new life in the underworld of Bombay, India.

But with Behind Her Eyes due to drop on Netflix on February 17, Lightfoot hopes the thriller can provide viewers with an entertaining distraction from the challenges still facing the real world and a twisting plot he hopes will keep viewers guessing until the end.

“The fun of this is I don’t think your enjoyment is impacted if you work it out. You’re then waiting to see if you’re right, and that’s fun too.”