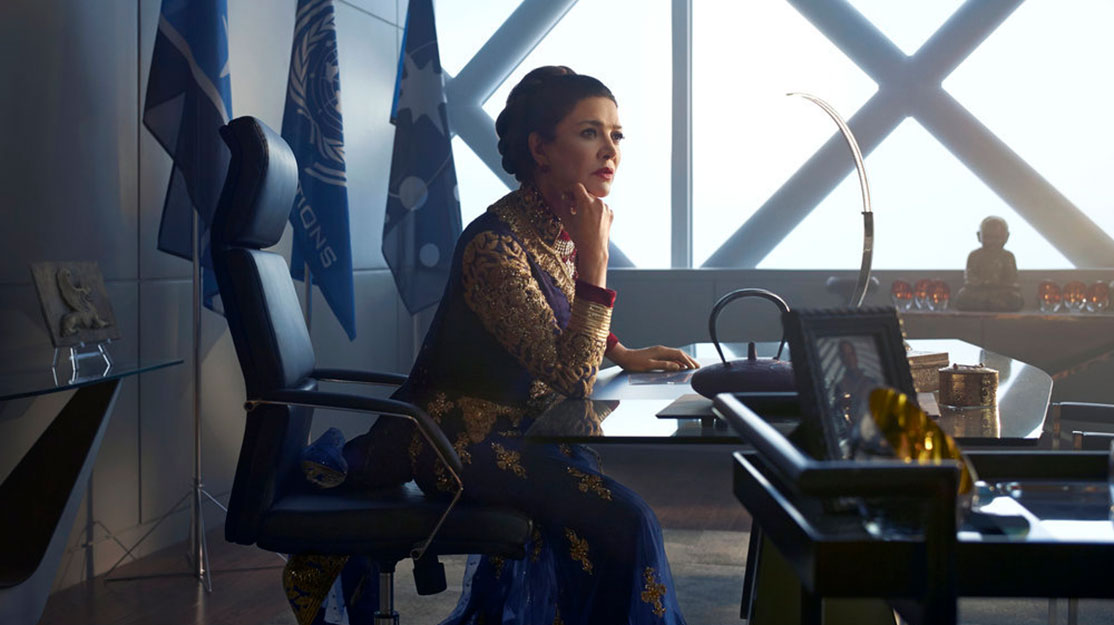 Once cancelled, The Expanse is the latest US series to have been be revived by a streamer. Star Shohreh Aghdashloo tells DQ why the space drama is out of this world.

For a few weeks in 2019, The Expanse was cancelled. Arguably the most popular space drama of recent years, thanks in part to its international syndication on Netflix, the show was inexplicably dumped by US cablenet Syfy after three seasons in May. Its fans were stunned.

But in the modern TV age, what is dead can be resurrected. No sooner had #SaveTheExpanse begun trending on social media than Amazon Prime Video stepped in to pick up the show for a fourth season, while also plundering the first three seasons for its subscribers.

For the cast of the show, rumours of the show’s return had swirled around aimlessly like a balloon in a storm, and with nothing to ground them, they remained only fragments of online gossip. “I remember, when I was told that it was cancelled, my first reaction was ‘C’est la vie,’” recalls Shohreh Aghdashloo, who plays UN executive Chrisjen Avasarala in the series. “And for me, life is a journey from chapter to chapter. When one chapter ends, another opens. There is no need for me to get worried. I just go with the flow.

“But my colleagues, they were not happy. They were like, ‘Surely there must be something we can do.’ I kept saying, ‘It is what it is.’ Then, a couple of days later, I saw a picture of a blimp carrying a message, ‘Save The Expanse.’ The fans had put their pennies and dollars together to send a plane with a banner to go around the Amazon building, where [Amazon owner and The Expanse fan] Jeff Bezos was in his office. And when he saw the balloon, he said, ‘What, this show’s going to be cancelled? I want to see the rest of the show,’ and picked up the phone.”

Fans have a lot to answer for these days, with their online devotion and creative stunts previously saving numerous other shows from the scrapheap, not least Lucifer, Brooklyn Nine-Nine and Designated Survivor. That they would go so far to save The Expanse was not surprising to Aghdashloo.

“From the very beginning, we knew it was very much a fan-based show,” she says. “They did lots of fan art that I’m collecting, they send gifts to us. One year, we started having hardcore fans visit the set and one of them made a bracelet for me with stars, the moon and the sun. Another one bought me a nice brooch. We were bombarded with gifts, and that has never happened to me before. You cannot believe a show can have such an impact on people.”

A star of film and television, with appearances in series such as 24 and Grey’s Anatomy and films The Lake House and The Sisterhood of the Travelling Pants 2, Aghdashloo had plenty to keep her busy while a deal for The Expanse’s return was put in place. She had just filmed two movies, Run Sweetheart Run and The Cuban, while also producing 2018 feature Simple Wedding.

“It’s a very different kind of role,” she says of producing in comparison to acting. “Now I understand why Robert De Niro says he’d rather act than direct or produce, because you get involved with other stuff that you usually don’t if you’re just acting. I still prefer acting but, when it comes to making the projects I am in love with and would like to do, I have to produce or they won’t get made.”

Returning to The Expanse, Aghdashloo says the show’s move from Syfy to Amazon had little impact on the cast. “It was just like we were picking up from where we left off,” she says. “There was no difference at all. I’m so happy for my colleagues, these young people who spend six months of a year in the cold in Canada to bring the story to light. We were in the dark before Amazon, now we’re in the light. So it makes such a difference.”

Part of the appeal of science fiction is the chance to talk about contemporary issues in a heightened setting, with modern-day themes played out in stories featuring groups of aliens or humans living in different worlds. It’s that approach to storytelling in The Expanse that most impresses Aghdashloo, who says that while the show may be deemed sci fi, “it’s not fiction to me. It’s just a symbolic way of talking about today’s world.”

Describing The Expanse as “relevant” and “timely,” she continues: “This is how the writers envision the future, in which women can work shoulder to shoulder with their male colleagues and they can hold key positions and roles in society. For my part, it’s geopolitical science fiction with a dash of Shakespearean drama. All the ingredients of Shakespeare are there – jealously, rivalry, confusion.”

A series regular from the beginning, Aghdashloo plays Avasarala, an Earth-bound politician working to prevent war from breaking out between Earth and Mars. “I adore her. I love her. I am in awe of her, for her perseverance and the fact she calls herself a public servant,” says the Iran-born actor, who joyfully recalls some of her favourite lines from previous seasons, such as her season two diatribe when Avasarala discovers Secretary Errinwright (Shawn Doyle) is betraying her by working with Jules-Pierre Mao (François Chau) and his family.

In the episode, titled Paradigm Shift, Avasarala tells Errinwright: “I will freeze their assets, cancel their contracts, cripple their business. And I have the power to do it, because I am the fucking hero who helped save Mother Earth from the cataclysm that Jules-Pierre Mao unleashed. Tell his children the government is more powerful than any corporation, and the only reason they think it feels the other way is because we poor public servants are always looking for some fat private sector’s payoff down the road. And I’m not looking. And by the time they can pull the strings to force me out, it will be too late. Their family will be ruined. Their mother, their children, their children! All of them: pariahs! Outlaws! Hunted and on the run for the rest of their days, until we find them, and nail each and every last one to the wall. Make sure you tell them that.”

Aghdashloo explains: “When I read the line, I couldn’t wait to run it [on set] because, in real life, I agree with her so much. Whatever we’re suffering from comes from rotten, corrupt politicians. It’s because of their deeds, their acts, that millions of people have been misplaced and displaced, and it keeps happening. So when I read the line, I can’t even tell you how happy it made me.

“That night, I was learning it until I went to sleep. I told the writers I wished it was a daily show so we could watch it that evening, because it’s so timely and relevant. But then I had to wait another year for it to come out.”

With The Expanse now in season four, the story is naturally far removed from its initial premise. Based on the books by James SA Corey, it opened hundreds of years in the future in a colonised Solar System when the case of a missing girl brings together Avasarala, hardened police detective Josephus Miller (Thomas Jane) and rogue ship captain James Holden (Steven Strait), first of the Canterbury and later the Rocinante, to expose the greatest conspiracy in human history.

In the latest run, with the ‘Ring Gates’ having opened up access to thousands of new planets, a blood-soaked gold rush begins, igniting new conflicts between Earth, Mars and those from within the asteroid belt. Meanwhile, the crew of the Rocinante are caught up in a violent clash between an Earth mining corporation and desperate ‘Belter’ settlers.

Aghdashloo says appearing in the series is “beyond my wildest imagination,” adding: “This little girl from the Middle East is portraying a powerful female role in a US TV series, and now global TV series. It’s amazing. Sometimes it’s overwhelming – I have to pinch myself and think, ‘Am I really doing this?’ I love it because of the fact that when girls like myself in the Middle East or elsewhere see me, they think, ‘So there is a hope. If she did it, I can do it too.’

“I keep telling them all they need is courage, perseverance and love. Put it into a pot and you will be successful.”

In the future, Aghdashloo would love to play Indian stateswoman Indira Ghandi or Pakistani politician Benazir Bhutto. But for now, whether it’s film or television, she’s just happy to be in front of the camera. “When I was seven years old, my family would get together and, after lunch, they would say, ‘Bring Shohreh in so she can entertain us.’ And then I would start mocking every member of the family, singing and dancing.

“So that tells me that I was born an actor. I don’t act for the medium, be it TV, or cinema or theatre. At the end of the day, I think I’m a stage actress. Because even when I am on a set working for the camera, I get my energy from people on the set and thinking, ‘They’re watching.’

With Amazon Prime Video airing The Expanse around the world, there won’t be a shortage of people tuning in to find out what happens in season four, while the streamer has already ordered a fifth season of the space saga.

“Thank God for the game-changers – Amazon, Netflix, Hulu,” Aghdashloo adds. “We’re not only going global but our hands are free to go further and further [with the story]. There are always restrictions, but not as much. We get to tell the story the way it is. People keep asking me, ‘Now you’re on Amazon, can you swear more?’ Of course I can swear more, we’re global now!’”