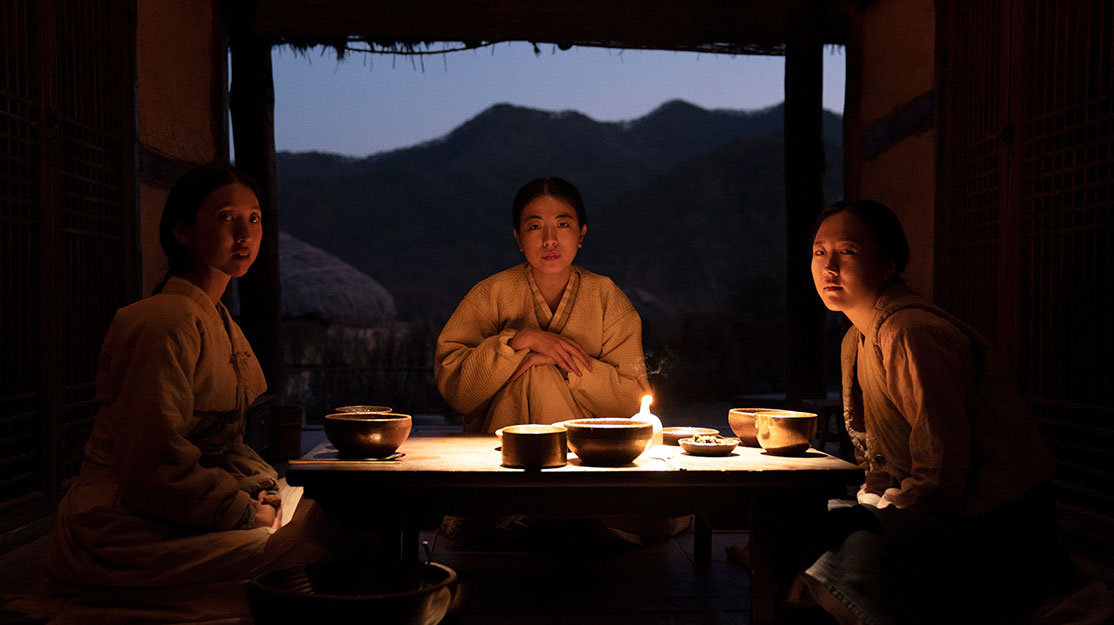 Taking in three different countries, featuring numerous languages and jumping between multiple timelines, it will be hard to find another TV drama this year that is as epic in scale and ambition as Korean series Pachinko. Nor will it be easy to find a show that’s as beautifully designed, dressed and shot as this eight-parter, which launches on Apple TV+ today.

Based on Min Jin Lee’s bestselling novel, Pachinko chronicles four generations of a Korean immigrant family over the past century, transporting viewers between Korea, Japan and the US and tackling a complex web of themes including war, peace, love, loss, triumph and reckoning.

The story is told mostly from the perspective of Sunja, a character we meet at three different stages of her life, from boarding houses in 1915 Yeongdo to New York City’s Wall Street in 1989. It also takes place against the backdrop of Japan’s pachinko parlours, where people spend countless hours playing noisy, brightly coloured machine games for the chance to win ball bearings they can swap for cash.

Behind the scenes, showrunner Soo Hugh (The Terror) has been the driving force behind the series, which is produced by Media Res and Blue Marble Pictures.

“I just thought the scope, the expanse and the ambition of the book would be an incredible challenge to do, and I feel like I’ve never seen the story represented cinematically before,” she explains. “Characters like Sunja and Hansu, I can’t wait for a global audience to see them. This is a Korean story and Koreans know this story. But I always say this is not a Korean show, it’s not a Japanese show, it’s not an American show. This show was meant for the world to see.”

Hugh, who was born in Korea and moved to the US as an infant, knew some of the history confronted in the series, which is rooted in events that date back to 1910 when Japan colonised Korea as part of its growing empire. Under Japanese rule, many Koreans lost their livelihoods and were forced to leave their homes. Those who stayed lived under harsh restrictions, while those who emigrated to Japan became known as ‘Zainichi.’

“I knew of the history generally, but I didn’t know the details. Getting deeper into the show and doing more and more research, this world and this time period all came alive for me,” Hugh says. “It makes you so empathetic by stepping into the shoes of the people who lived back then. I think about my grandmother – this is what she went through. Just something as simple as not having white rice because it was taken from you by your colonisers, I think of what that must have felt like for my grandparents. This entire show, from scene to scene, I want people to feel something so specific. I want them to feel they’re watching real people who actually lived or could have lived. I don’t want this to be a fantasy. This is a show very much grounded in the present.”

It took two years to write the series. Hugh led a writers room for 14 weeks, “but then the script process took a little bit longer,” she notes, as she sought to do justice to the novel and make the series as historically accurate as possible, which required an extensive period of research backed by more than a dozen historical and cultural consultants.

Then there was the translation process. “I was a little bit naive going into this about what that involved,” she says. “It was so rigorous and our translators are the unsung heroes of this show, not only to be able to translate the scripts that are written in English to Japanese and Korean, but they also had to translate them into dialects within those languages. It was a big process.”

That might be an understatement for a project that spans multiple locations and different timelines and presents each portion of the series largely without visual transitions to signal when the action is moving back and forth through time.

But like all adaptations, there was a point where they put Lee’s novel to one side and allowed themselves the opportunity to take her story forward and generate new ideas.

“After 14 weeks, you actually have too much story. We probably had enough story to fill 14 or 15 episodes in one season, but this has to be eight episodes,” says Hugh of the show, which is designed as an ongoing series. “Then the process of drilling down [into the story] takes place, and it is just organic. It’s pretty incredible what happens in the writers room.”

As they honed the story, the writing team would always come back to the central ideas of resilience and survival, which confront the show’s ensemble of characters in numerous ways throughout the series, not least when Sunja is faced with migrating from Korea to Japan and losing her home.

Casting actors to play characters who often speak multiple languages took “months and months,” the showrunner notes, and the search led her team to look not only in Korea and Japan but also in the US, Canada, Australia and the UK. Only once that was completed could the “ambitious and intense” shooting schedule, which also took place during the Covid-19 pandemic, finally begin.

Working with directors Kogonada (After Yang, Columbus) and Justin Chon (Gook, Blue Bayou), Hugh says there were two things she wanted visually from the series. The first was to ensure Pachinko did not “fetishise” period, so that no matter what time period a scene was from, it would feel immediate and visceral and not “make the past feel like ‘history with a capital H.’”

“The second thing I wanted this TV show to do is when you think of the word ‘epic,’ you always think of huge landscape scenes, and we do have a lot of those beautiful shots in the show. But the challenge of this show is I want the close-up to be the epic. How do you turn the close-up of a face and make that feel just enormous? Those were the two things I knew this show had to do,” she says.

Kogonada and Chon both recognised the scale of the task at hand but also saw a chance to tell this story from a fresh perspective that befitted both of their directing styles. “This is a period piece, but filming it in a way that doesn’t feel dated was an exciting opportunity,” Chon says.

Kogonada picks up: “Because it’s such a specific story of a time and place, you didn’t want it to feel like, ‘Oh, this is American television as we know it, but instead of white faces, we’re just going to populate it with Asian faces and we’re going to tell the story the exact same way as you’re used to If you watch American television.’ The real challenge was, is there a flavour or form that can capture the experience in a way that is also distinct and resonates globally and is not just putting a different content in the same package?”

Both Kogonada, who directs the first three episodes and part seven, and Chon come from a feature film background and say they were given freedom by Hugh and the producers to take risks and bring their own identities to the project. “But we always wanted to go back to Soo, as she’s the real visionary behind this,” Kogonada adds.

Picking up the directing baton in episode four, Chon describes that part of the series as the start of the story’s second act, and he attempted to inject fresh energy and a sense of constant movement.

While trying not to become overwhelmed by the scale of making Pachinko, both directors found themselves in charge of almost 300 pages of material each as they both filmed scenes from all eight episodes simultaneously.

“That workload and being able to process that much information was the true test,” Chon says. “But in terms of the way you approach the work, I don’t think there’s a difference between film and television.”

With so many contributors behind the scenes, there were numerous conversations about the direction and style of the series. But Hugh says that, like all shows, Pachinko really came together in the editing room.

“It was a very long editing process where you’re trying to figure out when to make that cut, especially between time periods. There was a lot of trial and error in that room,” she explains. “These episodes went through so many different structures, so many different rhythms and pacing. The edit room was really where we put it together.”

The showrunner found the opportunity to return to Korea and bring this story to the screen to be a particularly affecting experience, and recalls how the cast and crew overcame language barriers to form a close bond on set.

“Don’t forget, most of these people didn’t even speak the same languages,” she says. “We had so many translators on set, and at the beginning of this shoot, no one knew quite how to talk to other people. By the time we finished shooting, a brotherhood and sisterhood had formed and people communicated without even using words. Those are incredible memories.”

Hugh’s previous credits include Under the Dome, The Whispers, The Terror and fellow Apple TV+ drama See. But because the story of Pachinko resonated with her so personally, making the series was like nothing she had done before.

“The stakes felt different because I always say I made this show not for the world but for my mother, so it was a different type of filmmaking,” she says. “I wanted to make sure that she saw herself and her mother and her ancestors. I’m incredibly proud of the shows I’ve worked on, The Terror especially, and with this show the only difference is it’s me up there.”

With Pachinko having been designed as an ongoing series, the showrunner returns to the idea of endurance that is instilled in its ensemble of characters, where no matter what difficulties they face, they keep going.

“No matter who you are, where you are in history, that human need to endure is a thing that catapults us forward and keeps us going,” she says. Pachinko “is the story of my ancestors specifically, but also the story of a human diaspora. It’s a story of where we’ve been, and it’s very much a story of who we are now. To work with material like that is a once-in-a-lifetime opportunity.”