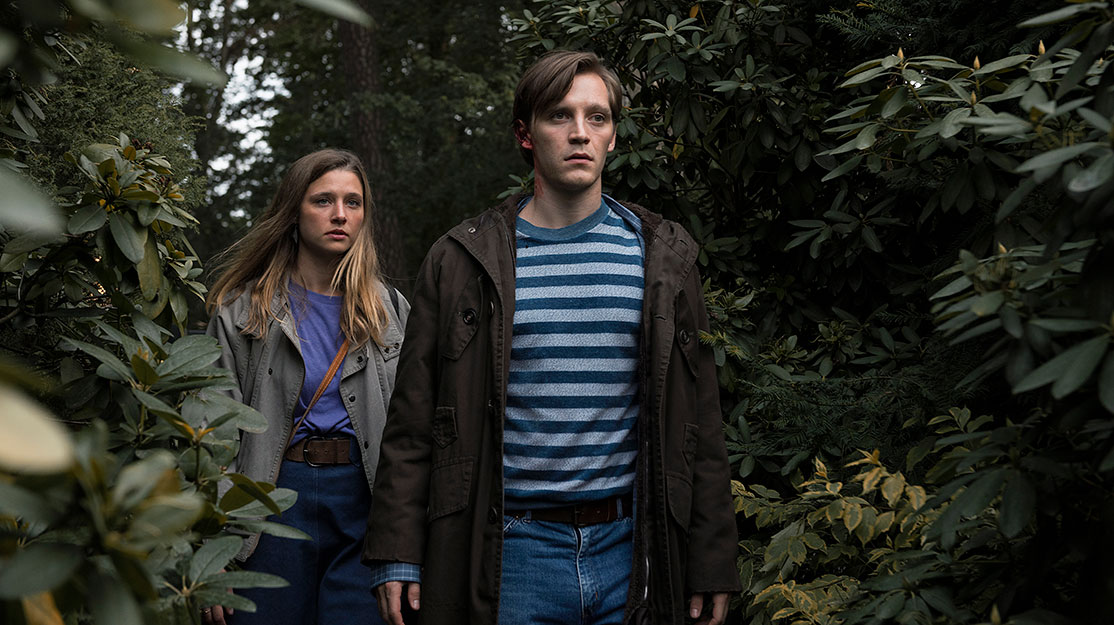 End of an era

The fall of the Berlin Wall marks the start of the end of the Deutschland trilogy, but star Jonas Nay tells DQ that super-spy Martin Rauch still faces some deadly decisions in Deutschland 89.

When it launched in 2015, German drama Deutschland 83 became a global sensation as its blend of spy thriller, Cold War tension and 1980s pop culture broke down the walls of foreign-language drama in countries around the world, paving the way for other series to find new fans overseas.

Deutschland 86 followed in 2018, continuing the story of spy Martin Rauch, an unassuming border control guard living in East Berlin under the control of the GDR who is sent into the West as an undercover operative.

Now Martin’s journey is set to come to an end in Deutschland 89, focusing on the pivotal year in the Cold War that saw the fall of the Berlin Wall, which opens the eight-part series. But after having a hand in the events that led to that monumental occasion, single father Martin must deal with the consequences as his world is thrown into turmoil.

Left reeling as their government collapses, Martin and his fellow agents at the HVA (East German Foreign Intelligence) must decide their futures. Should they remain faithful to the Soviet Union and join the KGB, work for an enemy agency in the West or try to find a new career and a new life?

“At the end of Deutschland 86, Martin makes the decision not to follow his plans to take his son out of the GDR and leave, because when he meets his son, he finds he doesn’t really have a connection with him,” says actor Jonas Nay, who plays Martin.

“When Martin meets Max for the first time, in 1986, Max is three and doesn’t have any connection to his dad. It strikes him that he has to grow into the role of being a parent if he wants to be a dad for Max. In 1989, three years later, we find Martin has a really close relationship to six-year-old Max. He’s now a single parent because his wife Annett left to work for the KGB in Moscow. Their relationship is really good.”

Martin’s spy activities have also been reduced to leaking files from Robotron, the technology company he works for, as he strives to live a simple life, much as he did at the start of Deutschland 83. Yet he quickly becomes embroiled in his old espionage life as his handlers continually use the threat of sending his son to Moscow as a way to ensure he carries out his orders.

“He’s a reluctant spy, but somehow he also always takes the initiative. There’s something that pulls Martin towards action where he finds that he can do something good or what works for his moral compass,” Nay tells DQ. “One thing leads to another and then the wall comes down [in episode one]. Because he has seen a very uncoloured picture of life on both sides of the wall throughout the series, he is one of the people who thinks reunification and the wall coming down might change his life in a good way.

“Of course, there’s a lot of uncertainty and he’s confronted with three options: being hired by a different secret service, getting imprisoned or getting killed. He’s not really able to just live a simple life with his son. That never really works out.

“He’s really good at being a spy, and he feels that and he knows that. Martin has three options on the table, but he’s going to search for a fourth option, which is leaving everything behind. That’s what he wants to do. That might include working for the CIA; it might include working for the KGB; it might include several things. And, of course, he gets in big trouble and in big danger. In 83, Martin’s big wish was to get back into the GDR and back to his old life. In 86, it was to finally get to know his son. In 89, it’s going to be just to somehow find a way to get out of this.”

Nay says playing Martin for the last five years has been “a blast.” But there were times when he thought co-creators and executive producers Anna Winger and Joerg Winger’s ambitions to create a Deutschland trilogy would not come to fruition. Deutschland 83 debuted in Germany on RTL and despite the show’s international success, low domestic ratings meant its future was in doubt. But Amazon Prime Video in Germany stepped in to commission Deutschland 86, with RTL taking the second window rights locally.

The final chapter, Deutschland 89, then went into production last year, with directors Randa Chahoud and Soleen Yusef, and will launch on Amazon in Germany, Austria, India and Japan tomorrow, ahead of the 30th anniversary of the unification of Germany. The series is produced by Fremantle companies UFA Fiction and Big Window Productions in cooperation with Amazon Studios, Fremantle and UFA Distribution.

SundanceTV in the US will launch the drama on October 29, before it arrives in the UK in February 2021 on Walter Presents.

“Before we started shooting the second season, it was a process of keeping our fingers crossed and hoping RTL and Amazon Prime could find a deal and that somehow we could shoot what the creators intended to do: a trilogy,” Nay says. “There was a lot of sweat involved, and we were so happy to do it for the second season. Season three was just like a big party coming together.”

Over the course of the series, Nay and his co-stars – including Maria Schrader, Sylvester Groth, Uwe Preuss and Alexander Beyer – have worked increasingly closely with the creators and writers, with Joerg Winger, Steve Bailie, Roger Drew, Ed Dyson, Michael and Lily Idov penning the final instalment.

“Joerg and Anna really count on what their actors have to say and think about the characters, and that influences what is happening a lot,” Nay says. “You feel in the spirit of the series that there’s a lot of passion from everyone in it. There’s always a very creative flow that we’re in when we’re shooting. It’s very special to have that.

“We got together before shooting the series months ago to talk about what could happen to the characters and how they could interact. And during the shooting, we were working on scenes and dialogue all the time. They trusted us on how we felt about our characters. Anna Winger, in the first season, always said, ‘Hey Jonas, you know Martin way better than I do, so tell me about it.’

“I know how hard it is to have a project that you’re writing and then somebody tells you how they see it. You have to be really cool and open-minded to take a chance on people giving you feedback and then filtering it and taking what you want or not. That’s really something special and I’m going to miss it.”

Nay says the most difficult part of playing Martin has been developing the character during the three-year periods between seasons and ensuring viewers still connect with him when the story picks up again.

“It’s been an incredible journey for Martin. He has traumas, he buries people, he kills people, he sees people getting killed, he loses his home and he’s got a son he had never met before,” the actor notes.

“Anna and Joerg always told me they wanted Martin to have a moral compass that you could feel. That’s what we were working on, so that was in every scene. And Martin has changed a lot from the very naive character we meet in 83. He was working as a border guard, he had a single mum that he loved and he was not an enemy of the system. He had a girlfriend. From that point on, he was being a spy, being threatened all the time and having to make decisions that nobody wants to make. He is now, on one hand, a very traumatised guy who has a very hard time trusting people; on the other hand, he still has a very good heart.”

Since starring in Deutschland 83, Nay has gone on to appear in series such as Line of Separation and The Master Butchers Singing Club. He’s now in the middle of filming miniseries Little America for German public broadcaster Das Erste, which tells the story of a clash of cultures when Americans settled in a community in western Germany in the early 1950s. Nay plays a German soldier who returns from Russia after the Second World War to find he is unable to fit back into the place he used to call home.

Meanwhile, Nay is writing a new project alongside Deutschland 83 actor Nikola Castner, who played Linda Seiler, a secretary who falls for Martin but meets a deadly end.

An accomplished musician, Nay is also a film composer and regularly performs with his band Pudeldame. But it is the Deutschland series that made him recognisable around the world. Fremantle has sold the show more than 125 territories, while Deutschland 83 also won an International Emmy and Peabody Award as well as the Adolf Grimme Award and Golden Camera award in Germany. For his role as Martin, Nay was named best actor in a drama series at the Monte Carlo Television Festival.

“The German story is very interesting internationally,” Nay says. “Of course, this story is also a very good microcosm to talk about the Cold War, particularly as it comes from the perspective of a young East German spy. We see the first season completely through Martin’s eyes. That’s unique.

“I am a series addict; I always binge series that are unique and have a different way of telling things. For me, it’s not always about the story they are telling in a series but about how they tell it, and how they create stories and how the characters are portrayed.

“In Deutschland 83, 86 and 89, you could always say, if you like it or not, it’s always unique. You haven’t seen it before, and that might be one of the parameters that made it successful. Even though we’re telling a spy story, it’s told in an entertaining and funky way, and you just love the main character from the start. Anna and Joerg found a very sympathetic main character that you want to follow, and told the story in a unique way.”