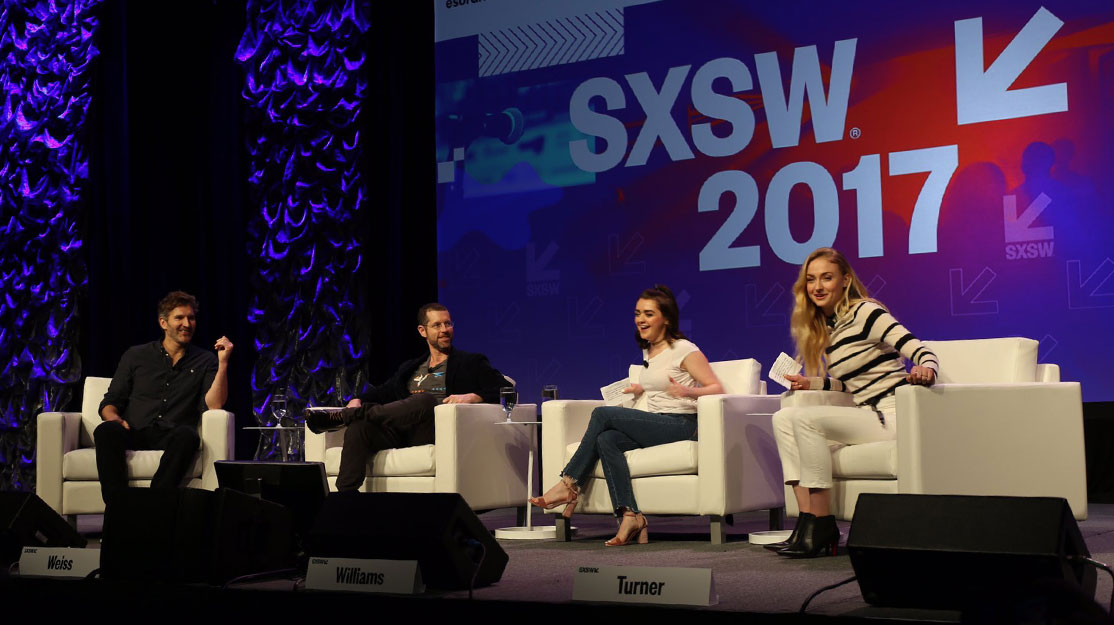 Game of Thrones showrunners David Benioff and DB Weiss discussed on-set disasters, character deaths, celeb cameos and plans for life after the fantasy series during a keynote chat in Austin.

Game of Thrones (GoT) showrunners David Benioff and DB Weiss set the scene for one of the most anticipated series finales in TV history during a discussion at the South by Southwest festival.

The duo filled to capacity the Austin Convention Center’s 2,400-person main ballroom for a Q&A, moderated by GoT stars Sophie Turner and Maisie Williams (who play Stark sisters Sansa and Arya, respectively, in the show), that was for the most part loose and playful.

Topics ran the gamut from Benioff and Weiss’s favourite on-screen deaths to tales of on-set disasters. Discussing the show’s controversial portrayal of women, Weiss said the writers had been drawn to the strong and complex portrayal of female characters in George RR Martin’s books, the source material for the series, from the start.

“We realised it’s an awful world this story takes place in, but there were more compelling female characters in the books who had agency, who were out there,” Weiss said. “They weren’t secondary to anybody – they weren’t anybody’s women or wives. They had their own storylines in this world. It seemed like a very actress-centric show from the source material.”

Elsewhere, Benioff expressed exasperation at the prospect of trying to stop spoilers leaking out each season, given the show’s huge cast and crew. “Even the CIA can’t keep information private, so how can we do it?” he joked, adding that, ultimately, it is up to the audience to decide whether or not they want to spoil the show’s revelations. “I’m not someone who reads the last page of a book first,” he said.

The showrunners also revealed that GoT’s four writers had argued over who would get to write what for the drama’s final season. “We have two of the writers on the staff, and the four of us get together in a room and break down [the story],” Weiss said. “Usually it takes two minutes to decide. This time it took 18 emails back and forth, because we realised it was the last time we’d be doing the show.”

He added that Dave Hill, who began writing for the show on season five, would pen the final season’s premiere.

Benioff said the aim for the drama – which returns to HBO for season seven on July 16 – from the beginning had been essentially “to tell a 70-hour movie.” He added that he was “relatively happy that we’ve managed to keep everyone together and tell it the way we want to.”

As for the post-GoT future, Weiss said his focus was entirely on finishing the series. “We’ve discussed things but, honestly, this show is a 24/7 thing,” he said, adding jokingly that his only real plan was “sitting in a cool, dark room for two months” once the show wrapped.