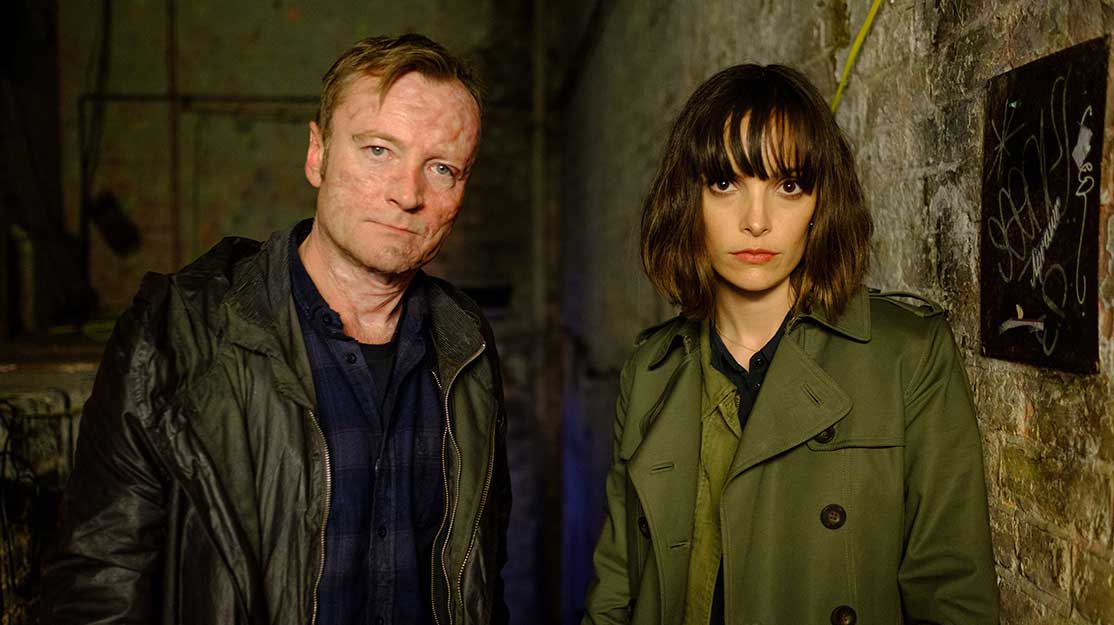 The writers of The Missing turn the hunt for a serial killer on its head with a new drama that starts at the end and works backwards. DQ chats to Richard Dormer and Jodi Balfour about starring in mind-bending crime drama Rellik.

Since they burst on to the scene in 2014 with The Missing, Jack and Harry Williams have joined the ranks of the most sought-after writers in television.

The success of that series spawned a sequel two years later, while they were also behind crime drama One of Us and acclaimed comedy Fleabag. Forthcoming commissions for their Two Brothers Pictures label include conspiracy thriller White Dragon and The Widow.

But now the Williams brothers find themselves in the unique position of having two series debuting in the UK at exactly the same time. Liar, which begins on ITV at 21.00 on Monday, is an emotional six-part drama that explores the consequences of a meeting between a teacher (Joanne Froggatt) and a surgeon (Ioan Gruffudd).

In the same slot over on BBC1, meanwhile, Rellik looks to be a show that will tear up the detective genre and leave viewers on the edge of their seats as the Williams brothers tell the story of a serial killer in reverse. Eagle-eyed fans will have noted the title is the word ‘killer’ spelled backwards.

Drawing parallels to 2000 film Memento, the perpetrator is caught at the beginning of the series before the drama moves back in time across six episodes to the very beginning, where the crime and the killer are revealed.

At the centre of the story is damaged and disfigured detective Gabriel Markham, played by Richard Dormer, who becomes obsessed by the hunt for the killer who scarred him in an acid attack. Alongside Gabriel is his partner Elaine (Jodi Balfour), who is described as a bright and intense detective who is eager to please.

With a cast that also includes Rosalind Eleazar, Paterson Joseph, Paul Rhys, Michael Shaeffer and Lærke Winther, the series is produced by New Pictures and Two Brothers Pictures for BBC1 and US cablenet Cinemax in association with distributor All3Media International.

It’s a sunny May afternoon when DQ arrives at the production base for the series – a dimly lit multi-storey car park in Stratford, east London, a stone’s throw from the Olympic Park.

Two Metropolitan Police officers are standing beside their motorbikes, ready to escort the crew onto the adjacent dual carriageway that will serve as the setting for a car chase. Nearby, a mint-green Nissan Bluebird is hooked up to the back of a truck as two cameramen settle in for the ride.

“It’s very original; it’s a completely original way of storytelling,” says Dormer, fresh from the daily chore of having his facial prosthetics removed. “We start almost at the end and work our way backwards to find out how all these characters came to be the way they’re presented at the beginning of the viewing experience. So it’s like a puzzle that comes together.

“There are so many red herrings, so many clues left throughout, but you’ve got to go backwards through it. That’s also very hard to do as an actor because we’re not shooting it in order, we’re almost shooting backwards and you’ve got to imagine what you’re feeling at the beginning, or is it the end? I’m confused – but it’s very interesting.”

Dormer describes his character as “not a typical cop,” and as someone who is very driven, intense and emotionally explosive. And from the beginning – which is actually the end – the hunt for the killer is a personal obsession for Gabriel. Viewers will see the acid attack play out midway through the series.

“He’s so driven to catch the person who did this that he comes back to work. He’s not psychologically, emotionally or physically prepared to do that, but he does it anyway,” Dormer says about Gabriel’s life-changing injuries. “That’s why the drama is so good, because you’re watching somebody unravel. He’s a pretty unpredictable, scary guy. He’s scary because of his absolute intense conviction. He’ll do anything and break any rule to get this guy who’s done this to him.”

Actors often say the toughest roles to play are those that are most similar to their real lives. Dormer agrees with that sentiment, describing Rellik as the hardest thing he has ever done, despite battling the undead in Game of Thrones and prehistoric wasps in the freezing environs of Fortitude.

“The weird thing with this person, I’ve discovered, is that I’m almost playing myself but in an altered reality, which is very interesting,” the Northern Irish actor explains. “It’s very strange. As soon as I hear my accent – I’m speaking in my own accent – I’m a different person but I’m not. Obviously I’m not a cop, but what if 20 years ago instead of coming to London to become an actor, I came over to become a cop? That’s how close it is to me.

“The one thing I’ve always done with every character I’ve ever played is I’ve crawled into somebody else, I’ve become this other thing, which is really liberating because then you have no fear of showing ugliness because you’re a different person. But if you’re playing yourself, it’s a lot rawer and can be very truthful, and that’s pretty scary. But that’s what it’s all about. It’s a scary story.”

It’s proven to be a particularly challenging role for Dormer, who admits he has struggled to switch off after a hard day’s filming and has found listening to classical music with a glass of red wine in hand helps him to unwind.

“Otherwise,” he says, “your head is buzzing with all the emotions and thoughts and fears you’ve been feeling all day. If it feels very real, it’s done something to your psyche. It’s invaded some part of you and shaken things up, so it’s important to recognise what those things might be and put them to bed and remind yourself they’re not your problems.”

Sharing the screen with Gabriel is his police partner Elaine, who “rocks his world,” Dormer says. “She’s a very mysterious, exciting woman and he is attracted to her. He’s married, it’s very complicated!” he adds.

Playing Elaine is South African-born Jodi Balfour, who starred in Canadian drama Bomb Girls and US series Quarry before landing her part in Rellik. She will also be seen on screen later this year as Jackie Kennedy in season two of Netflix’s royal biopic The Crown.

Describing the appeal of starring in the series, Balfour explains: “So often what draws you to acting is those great two-hander scenes where you get to have a really in-depth conversation with someone. But in this show, any time that’s happening, the characters are usually playing against what they really want or they’re concealing what they’re thinking, so that’s been really fun.

Balfour says she has also found it difficult to switch off after filming, so much so that she set herself boundaries during the shoot. “The most boring and laughable of which is I don’t really work at night, on the script or anything,” she reveals. “Obviously we work at night but when I was prepping and running lines, I didn’t work at night. Any time close to bed it really has been affecting my dreams and my sleep and all sorts of stuff. I have a completely separate life to this character and really work at maintaining that.”

Was she surprised when she discovered who the killer was? “I was pretty shocked,” the actor admits, adding: “I think everyone was. No one knew who the killer was for the longest time. Then slowly as people started finding out, it was really funny to see everyone’s reactions. For all of us who are on the inside of it all and knew all the dynamics, it was quite a shock so hopefully the audience will be even more surprised.” 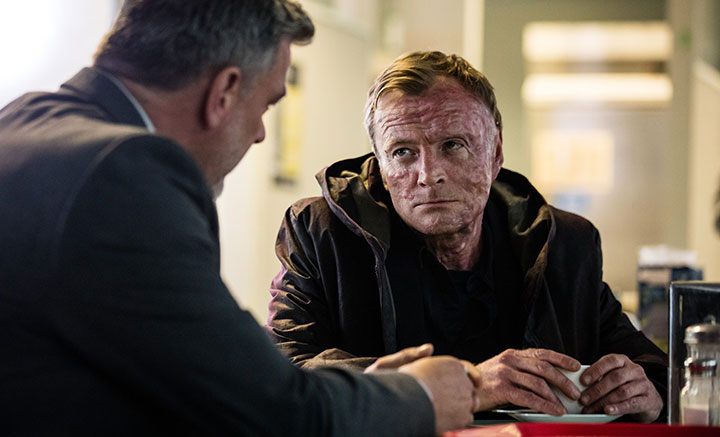 While Richard Dormer points to the similarities between himself and his character in Rellik, one thing that certainly sets them apart is the horrific injuries Gabriel suffers from an acid attack.

The hugely disfiguring scars his character bears give him a route into his performance, but they also meant the actor could look forward to spending two hours every morning having the silicon prosthetics attached to one side of his face. He then spent another 30 minutes each evening having them removed.

“I started researching actual acid burns, which is the most horrific kind of research you’ll ever have to do,” she tells DQ on the set of the series. “We got Richard from about three or four weeks before the actual shoot started so we could only get the ball rolling from then. So we were gathering images of things we liked and talking to the directors and producers to find out how they wanted it to look as well.

“When we got Richard, we sent him to get a life cast from [make-up effects expert] Kristyan Mallet, who’s been making prosthetics for Gabriel and Christine [played by Rosalind Eleazar]. Christian took the designs and sculpted bits and pieces, and those images go backwards and forward between all the different companies and directors and execs, and you try and piece it all together.

“We bought the moulds from Kristyan and we’ve got two full-time prosthetics artists: one who does make-up with me and one who’s always running the pieces in the workshop and painting them up and getting other bits ready for other things.

“Gabriel’s got a few different stages of his make-up. His main one that you see was sculpted with all the big moulds, and then there are different stages where he’s got a recovery mask on, which stops the face from stretching, so it stops a lot of the scarring. We made a few separate pieces that go into his hair and down his neck. Everything under the mask is just colour, just to stop pieces from sticking to the skin, and it cuts down the time a lot. It’s been ongoing because you keep tweaking things. Even now we’re still changing little bits.”

New prosthetics had to be created each day of shooting, with a dedicated ‘prosthetics bus’ on set to handle the different pieces as they moved different stages of construction.

“In the bus at the moment, there’s 10 pieces in a row all at different stages of being painted,” Woods notes. “So they have to be painted exactly the same, and then we just have to try to stick them on in the same place every day. We worked out [Dormer] has had 60 days in full prosthetics.”