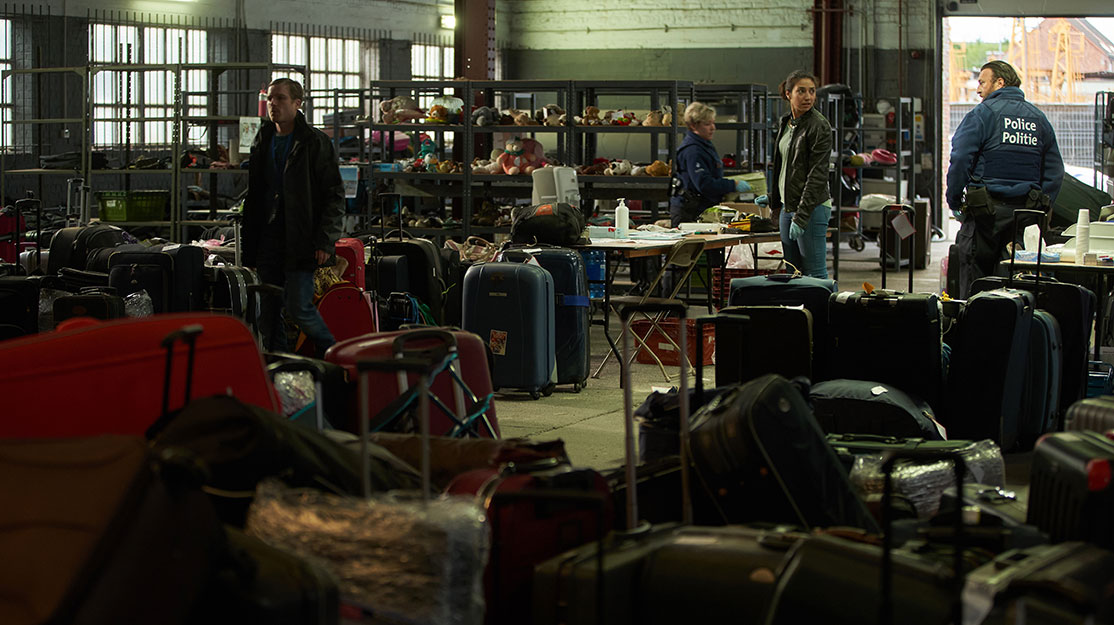 Lost Luggage screenwriter Tiny Bertels and director Nathalie Basteyns reflect on making the Belgian drama, which is set in the aftermath of the real-life Brussels Airport terrorist attack as one woman takes on the task of returning abandoned luggage.

Tiny Bertels is best known to Belgian viewers as the star of series such as Grenslanders,  Hotel Beau Séjour and Chaussée d’Amour. But this year, she made her screenwriting debut with a series based on true stories that emerged in the aftermath of the deadly Brussels terrorist attack in 2016.

Bombings in April that year led to the deaths of 32 innocent bystanders, as well as injuring scores more, as blasts struck the main terminal of the international airport in Zaventem and then at Maelbaek metro station in the city centre, close to several European Union buildings.

After the attacks, Bertels read a newspaper article about a woman who dedicated her time to reuniting bags that had been abandoned in the airport panic with their owners.

That article then inspired her to write Lost Luggage, a series created in close collaboration with director Nathalie Basteyns (Hotel Beau Séjour) and commissioned by Belgium’s VRT and French/German broadcaster Arte.

The psychological drama picks up 10 days after the devastating attacks, when police officer Samira Laroussa is tasked with handling and returning all baggage and personal belongings that were left in the departure hall that day. Every new encounter with a victim or relative will unbalance the seemingly strong Samira, who is far from ready to deal with her own troubled past. Despite her pain, she remains determined to help everyone apart from one person: herself.

Bertels wrote the series – which debuted earlier this year – with Michel Sabbe, Charles De Weerdt, Mathias Claeys and Edith Huybreghts, while Basteyns directed alongside Kaat Beels and Ibbe Daniëls. The series is produced by De Mensen and distributed by Newen Connect.

Speaking to DQ at French television festival Série Series, Bertels and Basteyns look back on producing the series, drawing inspiration from real stories relating to the attacks and making a show viewers can relate to.

Lost Luggage is based on true events. Where did you draw the line between fact and fiction?
Bertels: We fictionalised the stories and the characters, but the [terrorist] event, how it happened and what impact it had on all the victims, I wanted to keep close to reality. There were a lot of characters inspired by real people. We had to carefully guard the sense of the series – its feeling, intensity and integrity.

What was it about that newspaper article that inspired you to write the series?
Bertels: I think it’s because it was about the victims and about starting the healing process. I thought the power of that woman was amazing and I was touched by her actions [returning the luggage]. She said it was important because even half a shoe is important to keep, as it can make what happened real. Even half a shoe that belonged to your loved one has a lot of meaning. It’s a tangible reminder of what happened. By being confronted by [the items] you get back, you can start realising what happened and then the mourning or healing process can start.

How did you turn that story into a serialised drama?
Bertels: It was very difficult because you don’t have anything to lean on [having never written a series before]. You talk to people and do research, but it’s trial and error. I did most of it with two co-writers, Matthias and Charles. They helped with structuring.

How did you decide on the structure of the series?
Bertels: We tried out everything. At a certain point, I knew we’d got it right. We decided we would show everyone on the morning of the attacks in every episode. We meet people who come to the airport and we then jump to 10 or 12 days later and meet them again after they have been through that life-changing, traumatic moment, this time coming to them through our main character. Samira is traumatised by both the past and the present. She’s pushing her trauma away but, by meeting all these people, she will be confronted with her own pain. She thinks she’s moving away from her problems but, in fact, she’s doing the opposite.

How did you find the stories relating to characters who are reunited with their baggage by Samira?
Bertels: They’re inspired by true stories, but only with the permission of the people involved. I talked with victims and aid workers for four or five years. I kept them close to me because I thought that was very important. You cannot tell a story like this and lose track of those important things. It was very important to protect them.

What was your writing process on the show?
Bertels: The co-writers came in after we had a pilot. I told them a lot of the stories and they helped with structuring and beating out the story because I’m an actor, not a writer. This is the first thing I’ve done [as a writer]. I knew what story I wanted to tell but I didn’t know how to structure everything. They were such generous, loving people. They become your friends because you’re in a writers room together.

What was it like for you as an actor becoming a writer?
Bertels: It’s a different world. In Belgium, there are a lot of actors now who write because it’s all the same – you tell a story but from a different angle. But at a certain point I had to give my story away, and I would never do that again. That’s a lesson I learned. I had to hand it over to the directors, which is difficult. So I would stay closer [to the production process] in future.

Nathalie, how did you and Tiny end up working together?
Basteyns: We knew each other from a long time ago, from Beau Séjour and Chaussée d’Amour [Highway of Love]. Tiny came to me with the article and [producer] Eyeworks, and that’s how it started.

How did you approach directing series?
Basteyns: Kaat, Ibbe and I did it together. We did a lot of preparation and we knew we had to be really on the skin of Samira. It could not be shot as a voyeur; we had to be with her. That’s why we filmed her with handheld cameras.

Did you want to recreate the attacks?
Bertels: There’s one flashback where you see not the attack itself but the victims afterwards. We didn’t want to do it in full because it’s not about the attacks or the perpetrators. It’s about the struggle of the victims and those who have to live with what they’ve been through and how they carry on after something like this.

Samira has a lot of emotional weight to deal with. How did you cast Lara in the role?
Basteyns: We did two days of castings with many different women. It was very interesting – I would have gone to dinner with all of them because it was so great. They all had a little bit of the same story – our main character has troubles with her father and they all said, ‘I know what you mean.’ But we felt Lara really had her own private story that related to the character. She also talked to a lot of victims together with Tiny.

Bertels: You could feel when Lara entered the room, she had something. You can have that with the aura of a person who comes in – I’ve had it a few times already with different shows. I was thinking, ‘I hope she’s good,’ and she was good. She was very vulnerable too.

What was the audience reaction when the series aired?
Bertels: People recognised themselves. I saw a mother, one of my kids’ friends, and she was a doctor who went to help. She told me, ‘I didn’t want to see it at first but then I loved it so much. It’s so recognisable.’ It’s recognisable for everybody. We wanted to give people an insight into what happened and provide people with an opportunity to talk about it again, because we cannot forget. Everyone is dealing with loss.

Basteyns: If you lose somebody, you mourn. If you have dreams that don’t come true, you mourn. But there is hope. You always dream further. That’s the lesson. We cannot forget, that’s so important. We have to remember, even if it’s a terrible event, but it can never happen again.