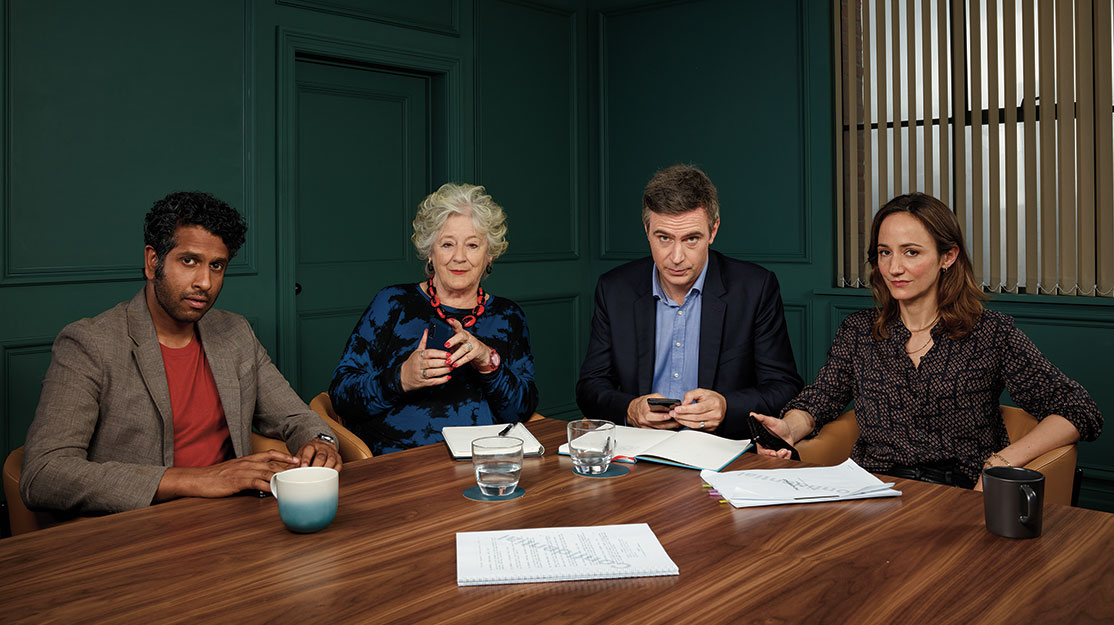 Writer John Morton and the cast of Ten Percent reveal how they overcame adaptation anxiety and called in a host of A-list cameos to make this English-language series inspired by French hit Dix Pour Cent (Call My Agent).

A Bafta-winning writer whose credits include Twenty Twelve and W1A, John Morton describes himself as an “early adopter” of Dix Pour Cent, the French comedy drama also known as Call My Agent that is set in a Parisian talent agency and has become a cult hit around the world.

So when he got a call – from his agent, of course – about developing an English-language remake set in London, he immediately took up the offer to meet the executive producers for a coffee. Three years later, Ten Percent, as the remake is called, is set to launch on Prime Video, with all eight episodes dropping on the streamer this Thursday.

Call My Agent, which debuted on France 2 in 2015, centres on Andréa (Camille Cottin), Mathias (Thibault de Montalembert), Gabriel (Grégory Montel) and Arlette (Liliane Rovère), the leading agents at talent agency ASK. When the company founder suddenly dies, they must come together to save the business, support their celebrity clients and overcome the conflicts in their personal lives caused by their all-consuming jobs.

A key feature of each episode of the show – which has run for four seasons and has a fifth on the way – is starry celebrity cameos. Those who have played versions of themselves so far include Nathalie Baye, Audrey Fleurot, Jean Dujardin, Monica Bellucci and Isabelle Huppert.

“It was a small cult hit. Those who knew about it really liked it and, since then, and in lockdown in particular, it’s become a big cult hit,” Morton says about the original series, which rose to global prominence after it was picked up by streamer Netflix.

“It was exciting to be invited to play with something beautiful, but it’s also very daunting because your first thought is how do you not fuck it up? You feel an enormous sense of responsibility to the original show, to the people who loved it, and yet this has got to be a different show as well. There were lots of challenges as well as lots of excitement.”

Ten Percent is Morton’s first adaptation for television. Transplanted to London’s Soho, the series retains the spirit of the French show while introducing new storylines and a raft of new A-lister appearances, from Kelly Macdonald, Dominic West, Olivia Williams and Helena Bonham Carter to Himesh Patel, Phoebe Dyvenor and David and Jessica Oyelowo.

Fans of Call My Agent – which has previously been remade in India – will recognise numerous elements of the French version in the first two episodes of Ten Percent, most notably when family tragedy strikes the Nightingales and the mysterious appearance of Misha. Meanwhile, Stella’s dog is called Mathias, in a sweet nod to the original series.

Morton says one early decision he took to push Ten Percent out on its own was to make the founder of the agency Jonathan’s father. “I always have a problem when you’re at a funeral close to the start of the story because, as a viewer, I think I can’t really care about that because I didn’t know them, so I wanted a way of making the death of Richard really mean something,” he explains. “It turns out the answer is Jim Broadbent.”

He compares the central characters of Call My Agent to a dysfunctional family, whereas in Ten Percent he chose to make them a literal family – a move that adds layers to the relationships and dynamics between the team of agents.

“Jonathan is a very confident and successful independent person, but you suddenly see him as a son – and not only a son but a child. Then you get a sense he’s been in this position of waiting in his father’s shadow for a long time, and when finally the shadow is removed unexpectedly, it’s not at all what he thought it was going to be. Suddenly, with that fixed point gone, there’s another layer to every conversation. That’s one example of a change we made to the opening that wasn’t in the French show.”

Another change is the introduction of Simon Gould, an old-school theatrical actor whose personal problems have prevented him from ever making good on the auditions set up by Richard.

“There is a version of this show, which the French also didn’t do, which would be a super-cynical satirical take on actors and celebrity and the insincerity of that, where a lot of very clever and articulate adversarial agents are crawling over each other to get the best deal,” Morton notes. “That would have been funny, but I’ve seen it. In a way, I’m interested in something gentler. Luckily with this show, we’ve got lots of attention-grabbing things in it anyway, and that affords us the ability to be a little bit more nuanced and gentler in human terms around the edges, which is what I’m hoping to achieve.”

Morton says Ten Percent diverts from the source material after a couple of episodes, as he constantly sought to get past his own reverence for Call My Agent. In his preparation, he rewatched season one of the French show and then didn’t return to it again.

“I thought, ‘I have to get past this moment of anxiety to a point where I can be loyal to a new iteration of it and new characters who spoke, moved and behaved differently.’ Luckily that seemed to happen,” he says. “It’s a bit like moving to a new house where you’re worried you’re going to miss the old house but, quite quickly, I found I became loyal to these characters, so that was a relief.”

Having worked in television and film across a 25-year career, Davenport says Ten Percent’s depiction of an agency “feels quite real to me in terms of representing the world, not least because the stakes are quite high.” He continues: “There are always hundreds of people working towards something but, ultimately, it’s two people in a room being recorded and, if something goes wrong with that, all hell breaks loose. If something does go wrong, it is quite quickly potentially quite farcical, and [the show] feels quite real as a result. It is heightened in reality, rather than heightened in fiction.”

The Soho setting and the Simon Gould character also lean into London’s theatrical roots, which are notably contrasted with attitudes held by Hollywood agents introduced later in the series.

“There’s that cosy feeling [as a London agent] that you’re happy if your client works, rather than it being about the bottom line,” Leonard explains. “When the Americans come in, you see a totally different type of agenting and how those two worlds negotiate each other.”

“Even today, it is the belief that actors should go off and work in the theatre first, and not just go and sit by a pool in Hollywood and hope for someone to ring them up,” says Steed. “Of course, it’s getting increasingly difficult to do because there’s less and less theatre. It’s showbusiness, we know it’s business, everyone wants to make a buck. But at the same time, everybody really believes in the beauty of the work. That was true of the French version and it’s true of this as well. However money-grabbing and however devious all of us may be, that’s the principle that drives us, and John has represented that amazingly.”

As in the French series, cameos play a big part in Ten Percent. Puwanarajah found it “weird, brilliant and slightly more straightforward” to talk to Kelly Macdonald playing Kelly Macdonald in episode one. “It just meant I had to make less stuff up, which is always good,” he says. “It became a lot easier.”

But the nature of the film and television industry means Morton would often not know until just before filming which star would be appearing in each episode, as competing shooting schedules would often dictating who would be available at just the right time.

“We had to find stories that were robust enough to believably fit a number of actors who were roughly at that point in their career or could make it credible, and then you’re in the lap of the gods as to where you end up,” the writer says. “You have to hold your nerve because there’s so much you can’t control. Happenstance plays a huge role and we got incredibly lucky – as soon as somebody is in the show, you think, ‘How could it be anyone else?’”

Davenport recalls the episode featuring husband-and-wife actors David and Jessica Oyelowo, having previously acted alongside the pair in 2016 feature A United Kingdom, in which Jessica played the wife of Davenport’s character.

“The Hall of Mirrors at that point was getting a bit much,” he jokes. “But once I did get used to it, one of the real pleasures of the job was sitting there watching these people work out in real time how much they were or were not going to reveal of themselves. They don’t just get points for turning up and being good sports.”

Produced by Bron and Headline Pictures, most of the series was filmed at Twickenham Studios in south-west London, with numerous days also spent on location in central London, where the challenge was to avoid any reference to the pandemic.

“Getting a wide shot of a London street last year without someone with a mask on was tricky,” Morton says. But with Paris taking a starring role in Call My Agent, a similar approach was taken with London for Ten Percent, though Morton – who also directs the series alongside Jessica Swale, Sam Leifer and MJ Delaney – wanted to avoid too many aerial shots featuring the city’s landmarks.

“We did shoot one scene on Primrose Hill with Prasanna and Kelly but, other than that, we stayed down in and around Soho among the higgledy-piggledy streets that become alleyways, with street signs at all crazy angles, to make you feel like you were down there amongst the energy,” he says.

Meanwhile, the numerous scenes Morton set within Nightingale Hart’s conference room often kept the cast on edge. “We were terrified because there’s eight people in a room and you don’t say anything for a page-and-a-half and then you just go, ‘Right,’ and then nothing for another page, and you’re always going to fuck it up,” Davenport says.

“Once we got into it, you realise that because he has such confidence as a writer, he uses one word when many writers would use six, so he gives you the space to fill in those gaps. We should all be so lucky to have these scripts.”