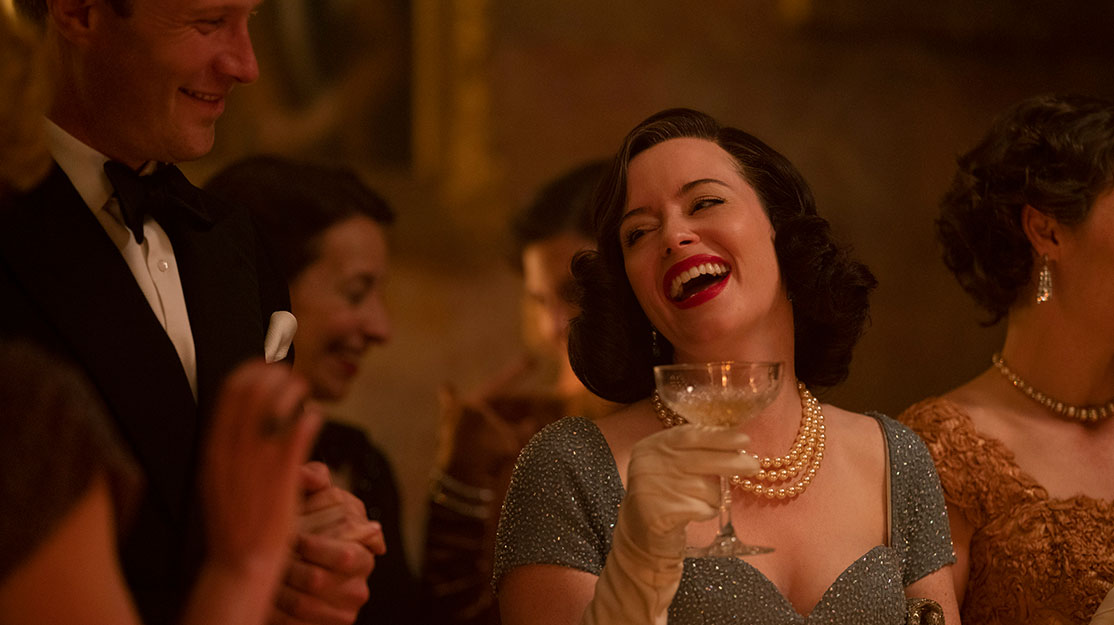 Writer Sarah Phelps and executive producer Delyth Scudamore discuss how they sought to readdress history and the maligned profile of the Duchess of Argyll in BBC and Prime Video drama A Very British Scandal.

The first time screenwriter Sarah Phelps heard the name of Margaret, Duchess of Argyll, it was on the occasion of the socialite’s death in 1993, aged 80. Almost a decade before Phelps would become a prolific contributor to BBC soap EastEnders and later adapt novels such as Charles Dickens’ Oliver Twist and Great Expectations, JK Rowling’s A Casual Vacancy and Agatha Christie titles including And Then There Were None, she was working in telesales selling advertising space in magazines when a colleague informed her of the news.

Phelps hadn’t – but the nicknames the duchess was saddled with over the course of her life instantly intrigued her, and she questioned how the salacious monikers came to be associated with the elderly woman wearing pearls staring back at her from the newspaper’s obituary pages.

As Phelps would soon discover, Margaret was famed for her charisma, beauty and style. But the duchess came to dominate the front pages during her 1963 divorce from Ian Campbell, Duke of Argyll, when she faced accusations of forgery, theft, violence, drug-taking, secret recording and bribery. There were also allegations of numerous affairs – she was said to have had more than 80 lovers – while a now-infamous Polaroid showed her in a sex act with a mysterious man, whose head was cut off by the angle of the photograph.

Margaret and her divorce are now the subject of a three-part BBC and Prime Video miniseries, A Very British Scandal, which is written by Phelps. Produced by Blueprint Pictures, it serves as a thematic follow-up to A Very English Scandal, which was written by Russell T Davies (It’s A Sin) and starred Hugh Grant as Jeremy Thorpe, a disgraced MP who was acquitted of conspiring to murder his ex-lover.

After that series aired in 2018, Blueprint met with Phelps to discuss a potential sequel and she quickly pitched an idea about the Duchess of Argyll.

“I remember [the meeting] because our assistant at the time had said, ‘I’m not sure there’s enough story,’ and Sarah went, ‘What?’ Of course, there was too much story,” says Blueprint head of TV development Delyth Scudamore. “We’ve dismissed so many stories, but the duchess stood out. It had sex, the naughtiness of people behaving badly, the establishment – these big elements people are fascinated by.”

But while the subject of that Polaroid continues to draw speculation, Phelps knew from the first moment she read about the duchess that she “didn’t give a shit” who the headless man was. Instead, she became captivated by Margaret herself, a woman who shone a light on the privilege enjoyed – and abused – by those in power and the upper echelons of class in British society.

“I was just fascinated by the complexity of a woman who is by turns infuriating, impossible, demanding, rude, vain, shallow, deep, troubled, hilarious and courageous,” Phelps tells DQ. “I absolutely loved her, and the deeper you get into the story… honestly, we barely touch on it all.

The judge presiding over the Argyll’s divorce was particularly damning in his verdict against Margaret, her behaviour and her ‘lovers’ – many of whom were actually gay men. Had Margaret acknowledged that in court, they would have gone to prison at a time when homosexuality was still a criminal offence under British law.

“She kept her lip buttoned and she wore that stigma and never betrayed her friends. That is a fucking queen,” Phelps says. “I love her because she refused to go quietly. She refused to do what her class, her gender and her sex demanded of her and what the establishment demanded of her, which was shut up, pay up, go quietly. No, she set fire to it all.”

The other key figure in A Very British Scandal is Margaret’s husband, Ian. Framed by the court case that would come to define her, the series opens with their first meeting on a train and their impassioned romance, before their relationship takes a sinister turn no sooner than the ink has dried on their marriage certificate.

“What Margaret was also doing in refusing to go quietly was telling the truth about her marriage,” Phelps says. “She was telling the truth about what it was to be married to a violent man who spent all her money, tried to get her locked up in an insane asylum and had basically ruined her, ruined her father, had lied to her father and had misrepresented everything about himself. She was not going to abide by that. She was going to tell the whole fucking lot. It was a very public stripping and very public punishment for her sexual behaviour, for not keeping her mouth shut, for not being discreet and for being immodest. Every day at court, she wore a different outfit. I mean, to me, that is badass.”

Phelps sees both Margaret and Ian as damaged characters who identified in each other what they saw in themselves and thought they could heal each other. Margaret also wanted to restore Inveraray Castle, and knew marriage would mean becoming a duchess, which would make her father particularly happy.

“She talked about that giving her a sense of purpose in life because she’d been bred to be this glamorous thing that would marry and go off and sit around doing nothing all day,” Scudamore says. “She was smarter than that. She was very naive and gullible – she made some terrible mistakes along the way – but she had this energy to try to achieve great things.”

Due to her family’s trade background, “there was always a sense of ‘outsiderdom’ that she really enjoyed,” Phelps notes. “But she’d also been trained to be looked at. She was meant to be looked at and meant to be the carriage for her parents’ social ambitions. A beautiful girl with the best clothes, schooled for nothing other than to be pleasing to men, so she was. That was basically all she learned. She longed to live in the male gaze… and then the gaze turned.”

Unlike A Very English Scandal, this series is not based on any book or existing IP. Instead, Phelps, Scudamore and Blueprint development editor Katharine Bond poured over court transcripts and conducted extensive research, while Phelps also included a level of invention that had to be backed up by evidence – if only to meet the exacting standards of the BBC’s editorial compliance unit.

“Even Margaret’s Wikipedia entry would not stand up in terms of compliance and editorial policy,” Phelps says. “It’s riven with rumour and hearsay that would not stand up. Delyth and I would both say we had a baptism of fire as regards legal compliance. We’re pretty well versed in that shit now.”

Scudamore continues: “It’s not just slander and defamation. It’s the idea a relative can look at them [on screen] and go, ‘That is not a fair portrayal of the person who I loved and cared about.’ It was really about us doing a very balanced story between everyone, not just Margaret and Ian but the other characters as well.”

The show’s blockbuster cast is led by Claire Foy (The Crown) as Margaret, with Paul Bettany (WandaVision) co-starring as Ian. Though the Covid-19 pandemic prevented Phelps from spending as much time with the two leads as she would otherwise have liked, she says the pair were “electric” from the first readthrough.

“You had this incredible, restrained, imperious fury from Claire,” she says. “Then Paul, the first time you see him on the train, he has a way of lifting his top lip off his teeth in this really lupine way and you go, ‘Oh, I see, you languorous, charming individual. You are an apex predator and you chew bones.’

“But what is wonderful with him is you get that charm and that danger. What was also really important to me in the writing of Ian was absolute, total despair. He was a very damaged man. He treated his wife very badly. He was a careless father. He’d been brought up by a careless, thoughtless, cruel father and he’d been soused in various addictions probably from the moment he was knee-high to a grasshopper. When he inherits the Duchy [of Argyll], he’s inherits it as a second or third cousin. It’s not direct and you always feel with him, as you do with Margaret, there is a really strong feeling of imposter syndrome.”

Distributed by Sony Pictures Television, the miniseries was filmed across London, Oxfordshire and Hertfordshire in spring this year, while the production was also able to shoot on location at Inveraray, in western Scotland. Norwegian filmmaker Anne Sewitsky (Monster, Black Mirror) directs with support from cinematographer Si Bell (Peaky Blinders, The Serpent), while Christina Moore is the production designer, Ian Fulcher designed the costumes and Catherine Scoble took charge of hair and make-up.

“There was a synergy to them all,” Scudamore says. “Everyone clubbed together. It was a really lovely group of people who were all really dedicated to trying to achieve Anne’s quite naturalistic vision that didn’t feel like The Crown, for example, but still had that opulence and beauty Ian and Margaret lived within.”

The exec describes the set as “like something Spielberg was doing,” with massive lighting rigs and cherry-picker cranes used to accentuate the often handheld, free-roaming camera style. “They used natural light sources so the camera could do a 360 and you get the feeling it’s different to other period dramas.”

One scene in the drama, which debuts on BBC One and BBC iPlayer this Sunday, that particularly highlights Margaret’s subservience to authority is when she is in a boat, speeding across a loch, wearing a leather jacket and her hair is ruffled by the wind.

“The leather jacket is real motorbike chic,” Phelps says. “They’re speeding across water, there’s spray everywhere. It’s giddy and exhilarating and it’s a shot in the arm. It’s about going really fast and the thrill… and then you go, ‘Oh shit, now we’ve got to talk to each other about the grinding stuff like who pays the bills, who gets the milk, who changes the loo roll.’ It’s about the familiarity of a marriage when you can’t keep going fast.”

Filming during Covid was difficult, “but come on, production is always difficult,” says the writer. “There’s nothing normal when it comes to production. You get blessed by working with people at the absolute top of their game creatively and are able to go, ‘Yes, this thing can be done,’ when it looks impossible. Sometimes the best work comes when you’re up against a wall.”

Blueprint is already exploring the possibility of another entry in the Scandal series, with Scudamore noting that any further iterations will always have a Union Jack behind them.

By telling Margaret’s story, Phelps has realised her ambition to show the duchess was “more than the scandal – and that she was brave,” she says. “She’s courageous. And the thing is, she was hung out to dry. The judge decided to pretty much eviscerate her in public. He threw her to the wolves.”