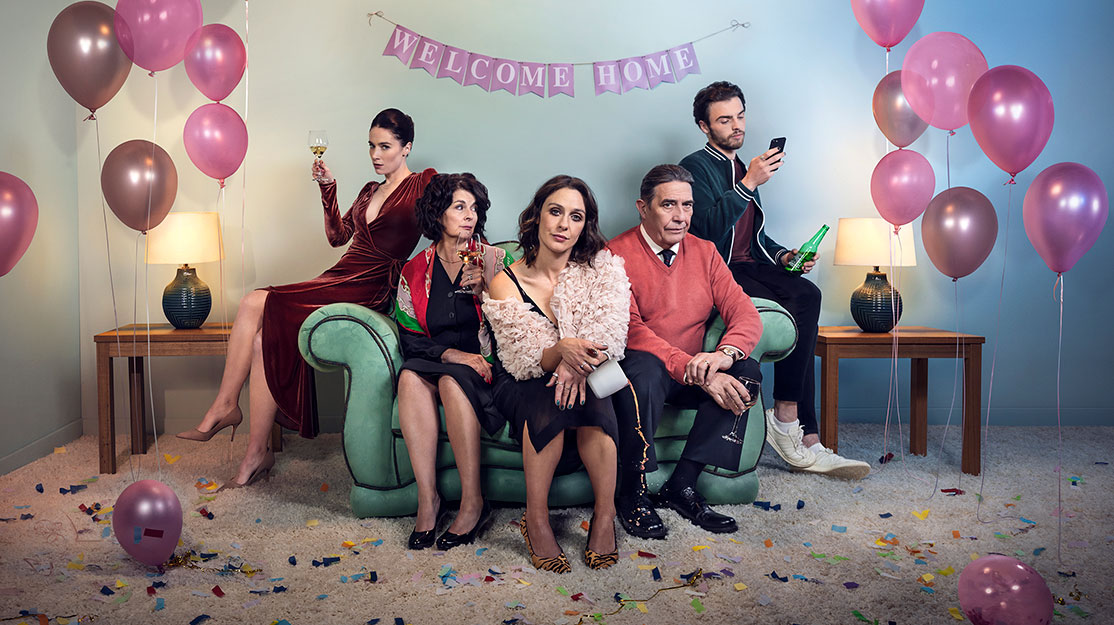 One woman’s journey to sobriety unearths hidden secrets for her family in Irish series The Dry. Star Roisin Gallagher, writer Nancy Harris and director Paddy Breathnach discuss tackling issues of addiction and finding the show’s balance between comedy and drama.

From an early morning pint at the airport to a large glass of wine with dinner and a boozy wake, alcohol is a common presence in Irish comedy-drama The Dry. That poses quite a problem for Shiv Sheridan, the show’s protagonist, who returns to Dublin after years of partying in London, sober and full of good intentions.

But being back with her family makes staying ‘dry’ much harder than she expected. As Shiv tries to navigate this new phase of her life, so must her family come to terms with her new “lifestyle” – and they all have issues they don’t want to face.

Directed by Paddy Breathnach (Vikings), the series comes from creator and writer Nancy Harris (Dates, The Good Karma Hospital), who drew on her own experiences for inspiration. Harris grew up in Ireland in the mid-1980s and 90s around a lot of sober people, and the conversation about alcoholism and addiction later influenced her friendships in adult life.

“I felt like there was something really interesting in the juxtaposition in Ireland of this traditional Catholic culture that actually had a huge drinking side to it, and then the contemporary side where we’ve got gay marriage and we’ve got abortion,” she tells DQ. “People have had to get sober and really look at the past and the history of where they’ve come from. I felt like there could be a really great show in that.

“There was also tension [in the family] about what’s the right way to get sober, and what makes an alcoholic. There’s a lot of people who might worry about their drinking, where you had times when you have an ambivalent relationship to alcohol. But would they say they’re an alcoholic? I thought that was a big question that could be answered, but it felt like it could be much bigger than just alcoholism and recovery. It could be about a family.”

Harris, whose background is predominantly in theatre, first wrote a pilot script for The Dry six years ago, when Irish broadcaster RTÉ commissioned two initial scripts. That pilot barely changed until it was committed to film, with the writer keen to open the series with a wake – a “drink-soaked event” – and the fact the family appear to be mourning not the death of a loved one but Shiv’s newfound sobriety.

By the time Breathnach joined the project, four scripts were in the bag, and his conversations with Harris shaped the rest of the series. But while Shiv is at the centre, the writer wanted all of the characters’ stories to be equal.

“I didn’t want it just to be a recovery story,” she says. “It also felt to me in my experience personally that sometimes the people we don’t hear from are the people who maybe don’t have a label for their pain. She’s in pain and I wanted to tell that story really truthfully. But I felt like the sister’s also got her stuff going on, the brother does, the mother, the father. You might not be able to name it as easily as addiction but it doesn’t mean it doesn’t exist. I wanted to tell a story where our existential experiences of life are in play as much as the really difficult challenge of trying to get sober.”

Harris was constantly backed by Element Pictures (Normal People) executive producers Emma Norton and Michael Dawson during the show’s extended development period, with RTÉ and BritBox UK both backing the series, which is distributed by ITV Studios. The Dry launched on BritBox earlier this month and comes to RTÉ in the autumn.

“Element just had such commitment to the idea, and Emma didn’t let it go for six years,” Harris says. “Then bringing Paddy on was inspired because he’s such a brilliant film director. He utterly understood the world and he was so delicate with it. The Dry also has such a specific cultural context, not about alcoholism but about what family means in Ireland. He understood all that.

“Then we had this amazing cast. I’m just really excited for them to be out in the world because a lot of them aren’t known yet but they give really brave performances. Shiv is often the straight man in the scene but the comedy has to pass through her. That’s quite a difficult thing to do.”

“I really was drawn to her wit and sense of humour,” says the actor about Shiv. “I was drawn to her earnestness and her amazing capacity to mess things up. Figuring out what really went on during those 10 years she was in London fascinated me, and the idea of why people are addicts, the shame they carry, how they interact with people and how they can so easily lie and hide it. They really play a lot of different versions of themselves.”

Gallagher and her on-screen family spent a week together before shooting began to run through a few rehearsals, while the actor decided she wouldn’t drink alcohol for the duration of filming.

“A part of it was to keep the head clear but I was like, ‘I’m just going to give this a go.’ It’s not something I thought about until I read the script, and then I stayed dry throughout shooting,” she says. Gallagher also joined online Alcoholics Anonymous meetings, read about its 12 Step programme and listened to Russell Brand’s book Recovery in preparation to play Shiv. “I just went for it and listened to a lot of people’s stories and talked to friends who are in recovery for various addictions. It really helped me get into that space.”

While Shiv is at the heart of the series, The Dry is as much a comedy as it is a drama, and Gallagher, Harris and Breathnach all faced the challenge of finding the right line to navigate between the two genres.

“We watch the show through her and we watch things unravel around her,” Gallagher says. “There are so many hilarious things going on but Shiv can’t or isn’t able to laugh or have the banter or craic. Everyone else’s humour almost puts her deeper into her misery, and that in itself is quite funny for everybody else, but not for Shiv.”

“It was always comedy drama, that’s really important,” Harris notes. “The challenge directing-wise was to get the tone. Paddy had to hit very high notes of drama and then quite high comedy. He had the harder job in that respect, because there was real fine-tuning that had to go on in the performances.”

Breathnach admits he was “obsessed” with finding “the perfect recipe” to balance the show’s poignancy with its laughs and the naturalistic performances he and Harris both wanted. “For a while I was thinking, ‘Can I do it?’” he says. “If something is emotionally true, you can find ways to get to the comedy. But if you’re breaking something truthful, it won’t ultimately be funny. It might be funny in the moment or might be funny in that scene, but it’s not funny in a way that lets you keep the connection to the poignancy or the drama.”

Through the series, music also plays a part in finding the right tone for a particular scene, while songs from Irish singer-songwriters Niamh Regan and Sorcha Richardson are used to create the effect of a narrator steering proceedings.

“The songs are always apt. It’s not that you’re trying to tell the story with the soundtrack, but just on an emotional level, it feels like they’re paralleling what’s happening and it develops as it goes on,” the director explains. “Niamh is more folky but the tone has a slight wryness, and Sorcha’s lyrics are also very wry and that connects to the humour and the stories. Though they’re meaningful and there’s a poignancy there, there’s something wry about them. They help support the humour.”

Directing the whole series was “fairly intense,” Breathnach says, noting the typically hectic television schedule that involves overseeing prep, shooting and post-production of multiple episodes at once. Shooting took place entirely on location over nine weeks from August to October last year, with almost half of the schedule spent in the family home.

“That house is visually just fantastic,” the director says. “When you get a good location like that, it gives you choices and options. When you’re structuring a scene or working out how you’re going to shoot it, it presents possibilities that make it more interesting. Some locations, you just feel you’re trapped and there’s only one way to shoot it and it’s not that interesting. This one always gave you stuff and was a brilliant house.”

As for filming scenes featuring considerably worse-for-wear characters, Breathnach acknowledges that drunk acting can be hard. “You can push it too much. Drunk people are always trying to pretend they’re sober, so that’s one of the tips. Don’t try to pretend you’re drunk; pretend you’re sober. You’ve got to be cautious about that.”

Gallagher’s highlights from filming include shooting the wake that features in episode one and enjoying some “very, very funny” moments with the actor who played Shiv’s dead grandmother.

There were also a lot of emotionally demanding scenes, most notably in the final episode where Shiv finally unravels. “She’s actually really being honest for the first time,” the actor says. “It takes up until episode eight for her to see that in herself. That was a fine line to walk and to get right.”

It all adds up to a rollercoaster of a journey for Shiv, who must face up to questions about who she really is and where she’s going.