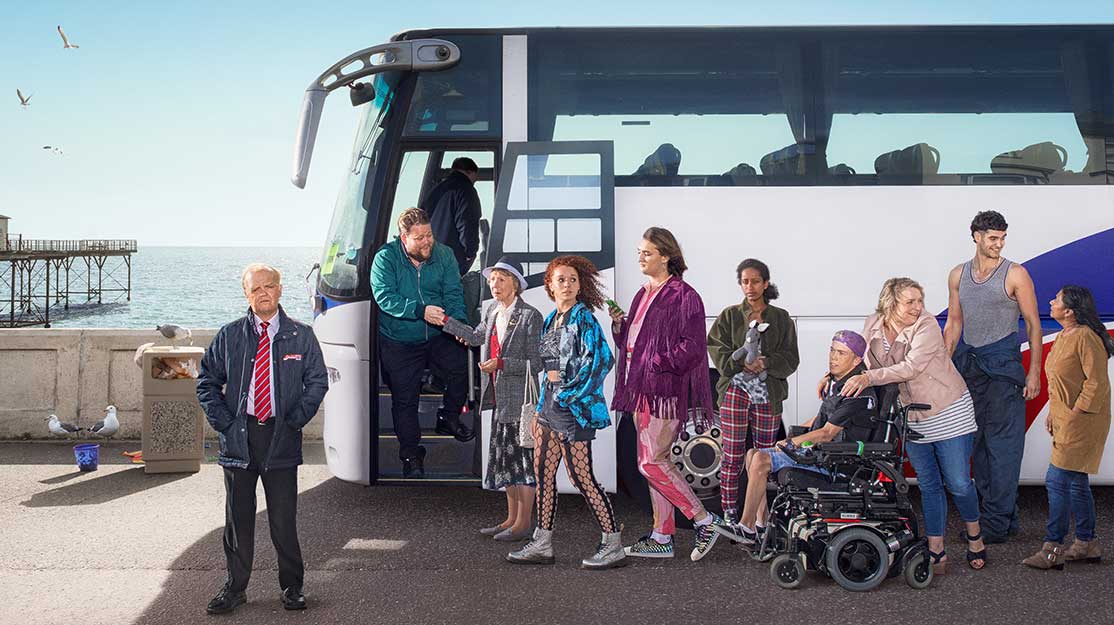 Award-winning playwright Tim Crouch has teamed up with actor and longtime friend Toby Jones to write Don’t Forget the Driver, a dark comedy-drama starring Jones as a coach driver whose mundane life is thrown into chaos.

While the future of the traditional British booze cruise – day trips from Dover to Calais in France to pick up alcohol and cigarettes – may be uncertain as Brexit negotiations continue, it’s a trip across the English Channel that provides the narrative spark for dark comedy-drama Don’t Forget the Driver.

Toby Jones (Detectorists, Marvellous) plays Peter Green, a single father and a coach driver struggling to find meaning in life while coping with his disaffected daughter Kayla and caring for his mum Audrey.

Yet the discovery of a dead body on the beach at Bognor Regis in episode one, coupled with finding a stowaway onboard his coach as he returns from a Calais trip in episode one, spins Peter’s world out of control.

“I think I’ve had a lucky, charmed journey into it. The idea has been around with me for a while and then with Toby, but I’ve known colleagues who’ve been knocking on the door of TV for a long, long time so I feel pretty charmed by the experience,” Crouch says.

Living in Brighton, a stone’s throw from Bognor on England’s south coast, he had been thinking of a story involving coach drivers for several years, having watched them pick up and drop off passengers in the popular tourist city. “You see them just hanging out, cleaning their vehicles, reading the papers. I always got imaginatively involved in their lives and it started to develop,” he says.

Crouch then took some coach trips himself, purely in the name of research, visiting a donkey sanctuary and Dover Castle as well as heading to France, taking notes of his experiences and observations. The subject then arose in a meeting with Sister Pictures exec producer Naomi De Pear, before Jones joined the project.

“We wrote very long treatments – four to six pages for six episodes – not really knowing how the industry standard is, but it enabled us to write the story,” Crouch remembers of the project’s early development. “Much of it still stands from that document and much has changed. But from that document we wrote the first episode for Sister. And with that script and document, that’s when the BBC came on board.”

The writing process saw Crouch sitting in front of a laptop while Jones “strode around the room and improvised.” They would discuss characters and storylines through a shared humour and a sense of Englishness – something that would come to define a drama in which the main character is looking for a sense of identity at a time when the UK is questioning its place in the world. However, it’s purely coincidence that a series four years in the making is coming to air when the country is in the grip of uncertainty surrounding its exit from the European Union.

“We started writing this before Brexit but, inevitably, if you place any story anywhere at the moment, the influence of what’s happening currently will be felt,” Crouch notes. “You could talk about what a character like that means in the contemporary climate, but we haven’t set out to write a political drama. We’ve written a drama about a man stuck in a world, and that world is connecting with the wider world. It happens with great force when, at the end of episode one, he realises he’s been involved in bringing someone into the country. At the beginning of episode two, he kind of involuntarily commits an act of kindness and the rest of the series is him dealing with the consequences of that act of care. That was our focus, always.”

Crouch is known in the theatre world as someone who is not afraid to play with structure or form, an approach that also applied to Don’t Forget the Driver, though it was more through inexperience than design. “We didn’t have a predetermined idea of how TV is written, so there are aspects of this series that are fresh and unusual,” he explains. “That’s not because we set out to break or reinvent it. As we have gone along, we’ve discovered what we can do. And now, having written the series, we feel we know a lot more about the medium from the writer’s point of view. We intend to write together again because it was such an enjoyable experience.”

Appearing alongside coach driver Peter are a band of regular characters, including Peter’s identical twin from Australia, also played by Jones. The actor was always in line to play the lead character, and even learned to drive a coach for the part.

“He’s an incredible actor,” says Crouch, who first met Jones in theatre 20 years ago. “But there’s just something that is both funny and heartbreaking about Toby’s work. There’s something quite innately English – a little lost, perhaps – in the characters he plays. Toby is the least lost person I know but he has a brilliant facility to play those kinds of characters.”

Meetings and conversations are already underway about a potential second season, though Crouch admits an impending stage play is currently his priority. “My theatre career will not end; it’s not like I’ve dumped theatre to join TV, even though in TV they buy you lunch!” he jokes. “In theatre you make your own sandwiches. Theatre is the root of where I come from but I’ve really enjoyed this experience and would love to do more of it.”

Crouch is just latest example of the continuing trend of theatre writers moving across to TV.  He remembers seeing the stage version of Fleabag at the Edinburgh Fringe Festival years before creator, writer and star Phoebe Waller-Bridge brought it to the small screen.

“She’s come from a different medium and is now totally rocking TV,” he says. “The theatre writers I know who do work in TV don’t do it exclusively – they try to balance two things. The live form is very different from the recorded form and they both have their strengths. The ideal is to combine both those things. It’s different writing for telly compared with theatre, and I’ve really enjoyed exploring what those differences might be. I’m no expert – it’s the beginning of a journey for me.”