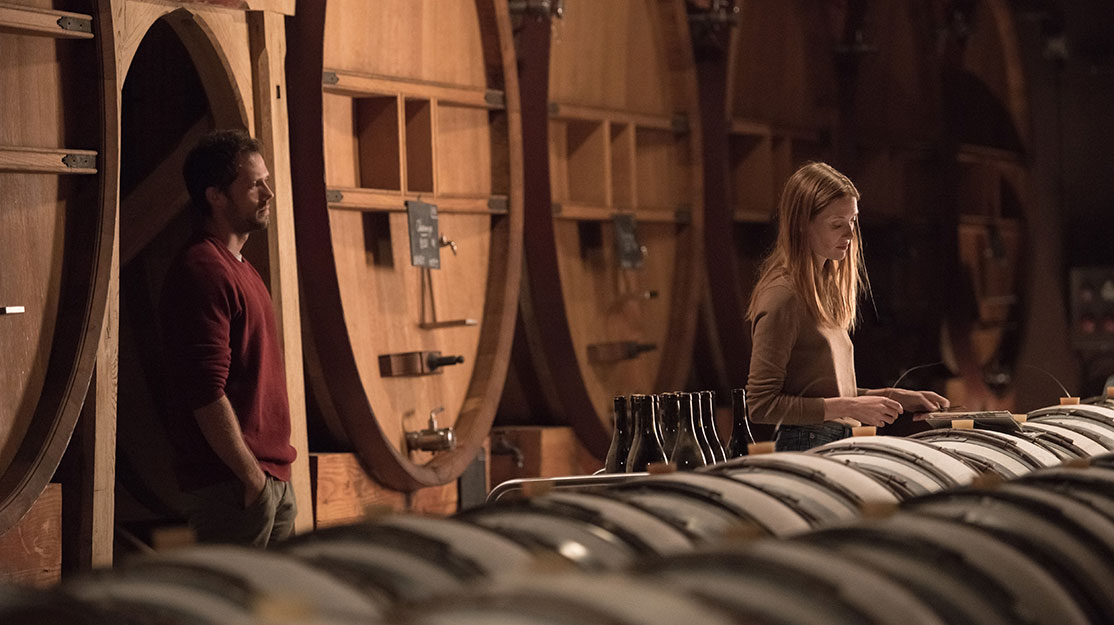 Screenwriter Quoc Dang Tran and the executives behind French-Japanese production Drops of God reveal how they have adapted a manga series about wine into an eight-part TV drama.

Based on a celebrated Japanese manga that stretches to dozens of volumes, French-Japanese TV series Drops of God is a unique family saga set in the world of gastronomy and fine wines.

When Alexandre Léger, creator of the famous Léger Wine Guide and an emblematic figure in oenology (the study of wines), passes away at his home in Tokyo, he leaves behind his estranged daughter, Camille, who lives in Paris and hasn’t seen her father since her parents separated when she was nine years old.

Camille then flies to Tokyo for the reading of Léger’s will, during which she discovers that her father has left her an extraordinary wine collection – the greatest in the world, according to the experts. However, to claim the inheritance, Camille must compete with a brilliant young oenologist, Issei Tomine, whom her father took under his wing. Léger refers to Issei as his “spiritual son” in his will – but is their connection more than just spiritual?

Fleur Geffrier (Elle) and Tomohisa Yamashita (The Head) star as Camille and Issei respectively in this live-action reimagining of Yuko and Shin Kibayashi’s manga series, which has been adapted by French screenwriter Quoc Dang Tran (Marianne). The manga’s original artwork is by Shu Okimoto.

The eight-part series is a coproduction between Dynamic Television, France Télévisions, Hulu Japan and distributor Legendary Television, in partnership with Adline Entertainment. It is directed by Oded Ruskin (Absentia, No Man’s Land) and produced by Dynamic’s Klaus Zimmermann (Borgia).

As production on the show continues in France, Italy and Japan, ahead of a provisional launch date this autumn, Tran joined the executives behind the series at Content London in December to talk about how the multi-national project came together.

Drops of Gods story centres on the ‘battle’ between Camille and Issei.
Tran: It’s going to be a battle between the two of them – the biological daughter versus the spiritual son. There will be three challenges, three tests, all related to wine tasting, and the winner takes it all. They will only have a few weeks to prepare for the tests. The only problem is Camille knows nothing about wine. This is the whole story, this is Drops of God, and we are very proud of the project.

Tran decided to set the story both in Europe and Japan as he sought to find a way to adapt the manga.
Tran: At first, it was a work of adaptation. But it’s very difficult to adapt because you cannot just translate a manga into a TV series. There is an Italian saying, ‘Traduttore, traditore,’ which means the translator is a traitor. So we didn’t want to go there and translate the manga literally. Instead, we chose to make it a kind of West versus East story, so the two main characters are against each other at the beginning of the show. Hopefully it evolves with time.

The project began five years ago with the idea to adapt the original manga.
Klaus Zimmermann, managing partner, Dynamic Television: These big international shows, they never come easy. It always starts with the passion and the excitement of trying to do something that hasn’t been done before in a very crowded marketplace –and adapting a manga set in the wine world is almost crazy.
It was very difficult to get the rights to the book to adapt it. when Quoc and I sat together trying to see whether there was a story there, for a long time, we were convinced there was no story to be told. It’s a Japanese story about wine, about only Japanese characters.
What is inherent to the manga is this fascination Japan has for Europe and how people through the ages have worked with nature and created wine, which is magical. This fascination is something we also felt we could give back. We have a fascination for Japan, so it’s a mutual attraction between Europe and Japan.
Quoc managed to bring this French story told by the Japanese back into the middle and constructed it around these two characters who also, at the beginning of the story, look at each other as rivals but also with a certain fascination, because they couldn’t be more different from one another.

Tran read all 44 volumes of Drops of God before putting them to one side and focusing on bringing the spirit of the books to television.
Tran: I wanted to be very respectful of what the writers did, and it was important that the concept was the same. If you are a die-hard manga fan of Drops of God, you should be able to watch the show and say, ‘Well, they got it. That’s the spirit. That’s the essence of what I read.’
The theme is also very dear to me. I realised not that long ago that I always write about the same thing over and over, whether I do sci-fi, drama or even horror, which is ‘love before it’s too late.’ That’s the only thing I can write about, so I found my way into the story with that.
The two characters are very different but they are both endearing to me. I always love my characters. You have Camille and you have Issei and I wrote an arc for both of them. I really wanted something benevolent with good characters and good-hearted people, because I had also written Marianne for Netflix, which was a pure horror show. I wanted to do something very different.

As the show was billed as a French production, it was a natural move to approach a French broadcaster first. France Télévisions came on board at the beginning as part of its ambition to bring international stories to its audience.
Zimmermann: Part of the five years we spent working on this was development, obviously, but also trying to put the financing together, because you need to find people who are brave enough to see that this is something extraordinary. We managed to find the equivalent to France Télévisions in Japan with Hulu Japan, who came on board as a true coproducer. That was fantastic because the story is culturally set between the two, so we had both of them sitting around the table. A big international partner in Legendary also came on to complete the package.

Manuel Alduy, head of cinema and international development, France Télévisions: The project came at a point for France Télévisions when our company wanted to do some big international coproductions. We want to have series that are different from what we do domestically. We air hundreds of thrillers and crime dramas across our channels. We really have all the stories about how to kill someone on our TV schedules. If you compare Drops of God to that arena, it will stand out, and that’s really what we are looking for.
The timing is also quite interesting because the European audience, including in France, is more open to stories that are not French or American. The success of Squid Game is one example.

Legendary’s Anne Thomopoulos, a former HBO executive, had previously worked with Zimmermann on historical drama Borgia and was happy to reunite on Drops of God.
Thomopoulos, partner, Legendary Global: This is certainly a risk, but it’s a risk that’s well merited. You want to work with people you have confidence in. I’d also followed Quoc’s career and had always been impressed with the work he’s done. Then, as we developed it, the team that Klaus put together was wonderful. I feel like it’s a piece of material that is very unexpected, but that’s what people are looking for. You want things that are noisy, and this is very noisy in a poetic, quiet way. It is almost contradictory. I don’t think people have seen a show like this before.

Thomopoulos compares the production values of Drops of God to those of a HBO series, and reveals the cast and crew have bonded during production over a shared or newfound love of and interest in wine.
Thomopoulos: Over the course of our first month or two of shooting, the entire cast and crew were brought together by this incredible love of wine. We were at the Château de Beaucastel in Châteauneuf-du-Pape [in France’s southern Rhône Valley] and we were surrounded by a family of oenologists who produce beautiful wine and who really embraced us as a family and taught us all. It was quite an extraordinary experience, and when you produce in areas like that with people who have love and passion, it shows on screen. There’s something that’s happened with this project from the very beginning that feels very magical. This piece will speak to people on many levels, and its specificity is such that it will become really universal.

With numerous international partners backing the series, Tran made use of various experts and consultants to ensure the story was authentic, while his vision was protected by everyone involved.
Zimmermann: In the writing process, Quoc was always asking for advice on the Japanese side and on the wine side. It’s been very well planned, so there was not much unknown territory to go into. The language percentage in the show is approximately a third in Japanese, a third in English and a third in French. That’s very complicated. We have a big set, so it was a weird experience with people speaking Japanese, English, French, Hebrew and some Italian.

Thomopoulos: The way Klaus ended up with a French partner, a Japanese partner and then us enabled it to stay authentic. Everyone was going for truth. In terms of the creative, we were able to stay focused on the authenticity of the two regions.

Alduy: They managed to create a story which, for a French audience, is very simple, very universal and very authentic, even though it’s based on a Japanese manga. The development process was quite fluid and, in the end, the result is not some kind of international pudding. It’s something truly French and Japanese for an international audience and also our local audience, which is what we were aiming for.

The series promises a blend of tones, from drama and romance to a story about family – and wine.
Zimmermann: It’s a cultural story between France and Japan. But it’s also a game; it’s a competition. It’s not as brutal as Squid Game, but it’s about something and it’s really heartbreaking and tense. The additional layer we didn’t expect to see, which our director brought, is that it’s also a thriller – it’s super suspenseful. You’ve never seen a wine tasting that is gripping like this. It’s extraordinary.